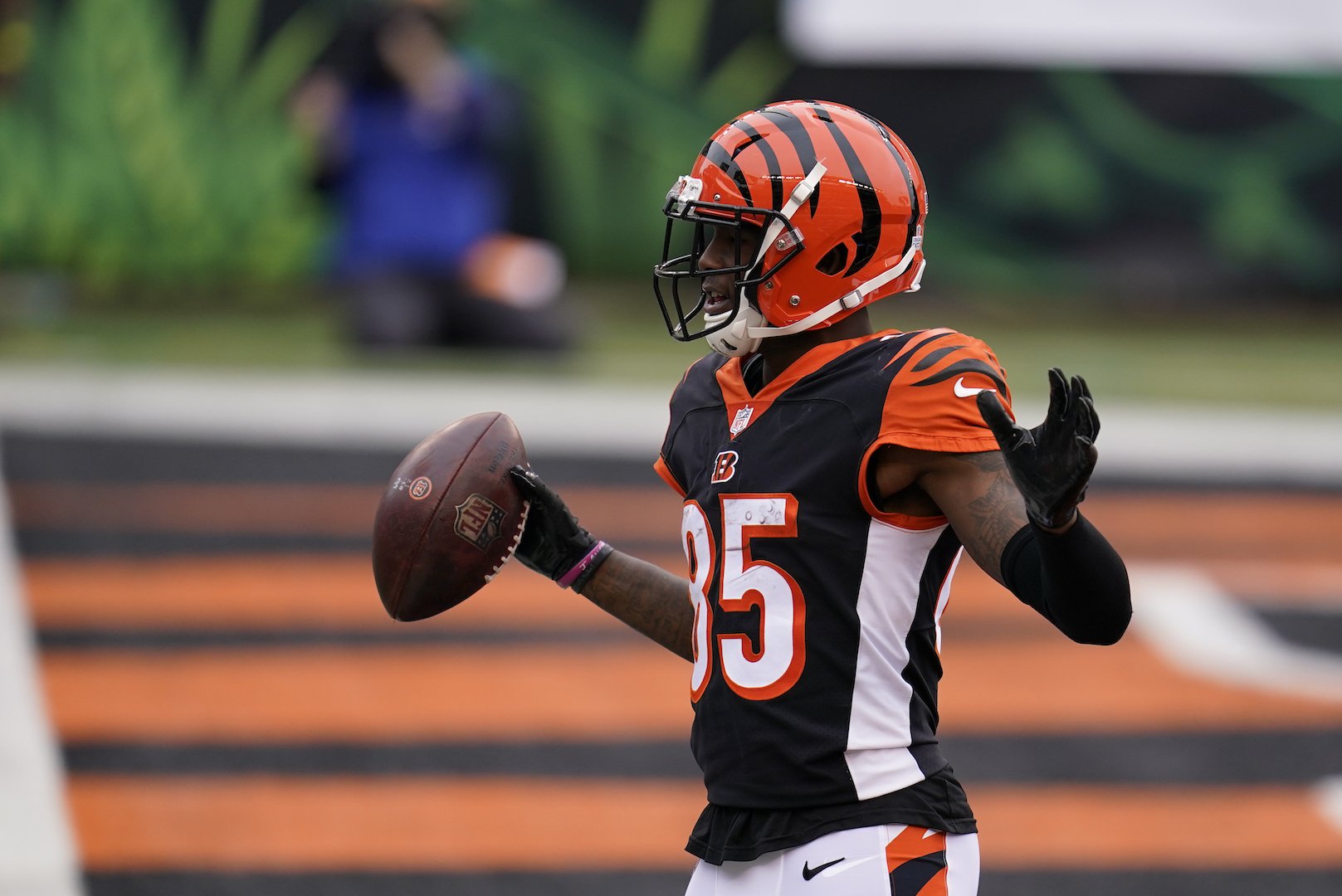 
For all your start/sit decisions, our weekly rankings are updated as needed through Sunday morning, or you can ask any question you have with Fantasy Consigliere. Also, check out the first episode of The Fantasy Consigliere Podcast for the top “Thumbs Up” options of the season—plus general Week 1 advice and a few players to target in dynasty leagues. As is the case every year, the Week 1 version of this article is a bit abbreviated compared to usual, and it will publish on Wednesdays in the future.

Thumbs Up of the Week: Jalen Hurts (@ ATL)

Hurts has high-end QB1 upside all season, and he gets a great draw in Week 1 to make an early case for it. Atlanta might be able to contain the second-year quarterback as a runner considering their speed at linebacker, but Hurts is always a threat in scoring territory and has high potential through the air with an upgraded group of wideouts in a possible shootout.

I think we’ll see more offense than most are expecting for Jets-Panthers, and Wilson profiles as a guy that will come out firing because of his confidence in himself and the supporting cast. New York’s hopeful franchise quarterback is arguably a top-15 option for Week 1.

The former quarterback of the Jets also doesn’t lack for weapons, and arm talent has never been an issue for Darnold. I’d still expect New York to be better attacked through the air than on the ground, and Darnold has everything he could ask for with a chance to prove himself operating Joe Brady’s offense.

I might be a little high on Winston right now as a low-end QB1 for the opener, but 67 points were scored in the 2020 Packers-Saints matchup, and the game not being at the Superdome might actually make it more likely to be a shootout due to a quieter crowd. As always, Jameis just needs to avoid turning the ball over.

Thumbs Down of the Week: Dak Prescott (@ TB)

Anyone who watched Hard Knocks has to be impressed by Prescott, and I wouldn’t bet against an MVP-level season from him this season. That said, Tampa Bay is the worst possible matchup to open 2021, and the laser focus on Dallas should have Todd Bowles’ defense ready to at least slow down the Cowboys and their high-powered offense. Dak is more of a mid-to-low QB2 for me.

The Bears always seem to have a primetime slugfest early in the year, and the defense knows they need to get back to playing at an elite level no matter who is under center for them. Stafford has had success versus his former division foe, but Sunday night might be more low-scoring than fantasy owners would like.

I think Carr should play well as Las Vegas opens Allegiant Stadium to fans, but he might be running a more conservative offense with Jon Gruden wanting to drain the clock and keep Lamar Jackson off the field. It’s unlikely that Carr gets into the 20-point range this week.

Most know that Jones isn’t a great play for his first start against an unforgiving Miami secondary, but I am putting him here to leave no doubt because of how high I am on New England’s quarterback in general. You might be best off leaving Jones on the waiver wire in redraft leagues until after the Buccaneers come to town in Week 4.

Thumbs Up of the Week: Raheem Mostert (@ DET)

Durability is the main knock on Mostert, but he’s a big-play-waiting-to-happen when on the field, and one touch might be all it takes for him to pay dividends on the fast track at Ford Field. I currently have him as my RB13, and the veteran will move up until RB1 range if Austin Ekeler (hamstring) is inactive for the Chargers.

Sanders’ fantasy outlook is very similar to Mostert’s, and the healthy offensive line for Philadelphia should open up some holes this week in Atlanta. Unless the Eagles promote Jordan Howard from the practice squad, Sanders will have the short-yardage role locked up to offset any receiving work taken by Boston Scott and/or Kenneth Gainwell.

I guess I’m shooting for upside at running back this week, as Coleman—the clear starter for the Jets based on preseason usage—is basically the discount version of Mostert or Sanders. The offensive line of the Jets could be better than expected, and I have Coleman as my RB28 running behind them.

It can be risky to double up on running backs from the same team, but the Niners want to run, run, and run some more in 2021, and Sermon profiles as more of the grinder for Kyle Shanahan. That said, he can also pass protect and catch the ball out of the backfield, so look for him to get quite a bit of run on Sunday.

Thumbs Down of the Week: D’Andre Swift (v SF)

Swift is one of the most difficult players to rank for the season, and his role might be lessened for the opener after missing training camp. Also, his fantasy value projects to be heavily dependent on receiving work, but San Francisco is very stingy against running backs in coverage.

Williams fits the billing of a fantasy option that might be a little quiet early in the season, so have patience if you drafted him early in your league. For this week in particular, the Giants have absorbing players up front with Dexter Lawrence and Leonard Williams.

I have Michel as a low-end RB2 in my draft rankings, but still picking up the offense—combined with a matchup against Chicago—has him lower for the opener. Again, Bears-Rams could be a slugfest on Sunday Night Football.

While you almost certainly have to play Barkley if you have him, the superstar back is ranked as a midrange RB2 in his first game action since last September. The low floor makes him a definite fade in DFS lineups, and Saquon could sit around 12-15 touches while getting back into the groove of things.

Thumbs Up of the Week: Antonio Brown (v DAL)

Anyone who listened to The Fantasy Consigliere Podcast—or that has Fantasy Consigliere—should know how I feel about Brown, and a throwback game feels like it could be coming tonight. Whether it’s Trevon Diggs outside or Jourdan Lewis in the slot, AB should get open. I have him as a WR1 option.

Smith enters the league as a top-tier separator from Day 1, and I’m excited to watch the connection with Jalen Hurts for the first time this weekend. The Heisman winner is a top-15 play and locked into my DFS lineup for Sunday.

This is mainly just a feeling more than anything else, but Higgins should be Joe Burrow’s most trusted target along with Tyler Boyd as Ja’Marr Chase finds his footing (remember, he didn’t play for LSU in 2020). Other than the elite options, Higgins would be the guy that least surprised me with a two-score game in the opener.

Even before putting together the Week 1 rankings, I knew Watkins would be high. He’s in the top 20 for me—that’s over 40 spots higher than the FantasyPros consensus.

Thumbs Down of the Week: Allen Robinson (@ LAR)

Robinson has been quiet in three career games versus the Rams with lines of 5/42, 4/15, and 4/70. Maybe this Sunday night will finally result in a touchdown against them, but I’m personally sitting him for D.J. Chark in my home league.

The Dallas wideouts could all do well tonight if it’s a shootout, but Cooper would be the most likely to disappoint based on expectations. The speed of Tampa Bay could be a problem—as long as they aren’t overaggressive to get beat on a double move.

Sutton could see plenty of coverage from James Bradberry, and Broncos-Giants might be a low-scoring battle. I would rather take a chance on another high-upside target for the 16-game, opening-week slate.

Chase should be treated as a wait-and-see option until he shows something against NFL opponents. I’m still optimistic about the future, but Cincinnati won’t force him the ball with Tee Higgins and Tyler Boyd as very capable targets.

Thumbs Up of the Week: Zach Ertz (@ ATL)

I’m clearly high on the Eagles with a player in each section, and Ertz probably isn’t getting enough buzz for the season. Just two years ago, the 30-year-old caught 88 passes for 916 yards and six scores.

Mac Jones will probably opt to attack the middle of the field in his debut (I know I’d be avoiding Xavien Howard), and Smith will be a significant piece in Josh McDaniels’ offense. I like the matchup versus Miami.

All eyes will be on Derrick Henry, A.J. Brown, and Julio Jones, so with everyone paying attention to the stars, Firkser could get loose for six in a high-scoring game.

Thumbs Down of the Week: T.J. Hockenson (v SF)

Hockenson almost certainly needs to be in lineups, but Fred Warner and company won’t be an easy matchup. You might need a score for him to return top-five value in the opener.

Thumbs Down: Jared Cook (@ WAS)

The Chargers are a team that didn’t play their key guys in the preseason, so I’m interested to see how quickly the offense clicks. Cook will see a lot of rookie Jamin Davis while splitting time with Donald Parham Jr.

Being ranked in the top 25 puts Rudolph squarely in play, but most of the league (aside from Evan Engram) is healthy, and there are better options to consider for Week 1. You’re probably hoping for a short score if you roll with the veteran.