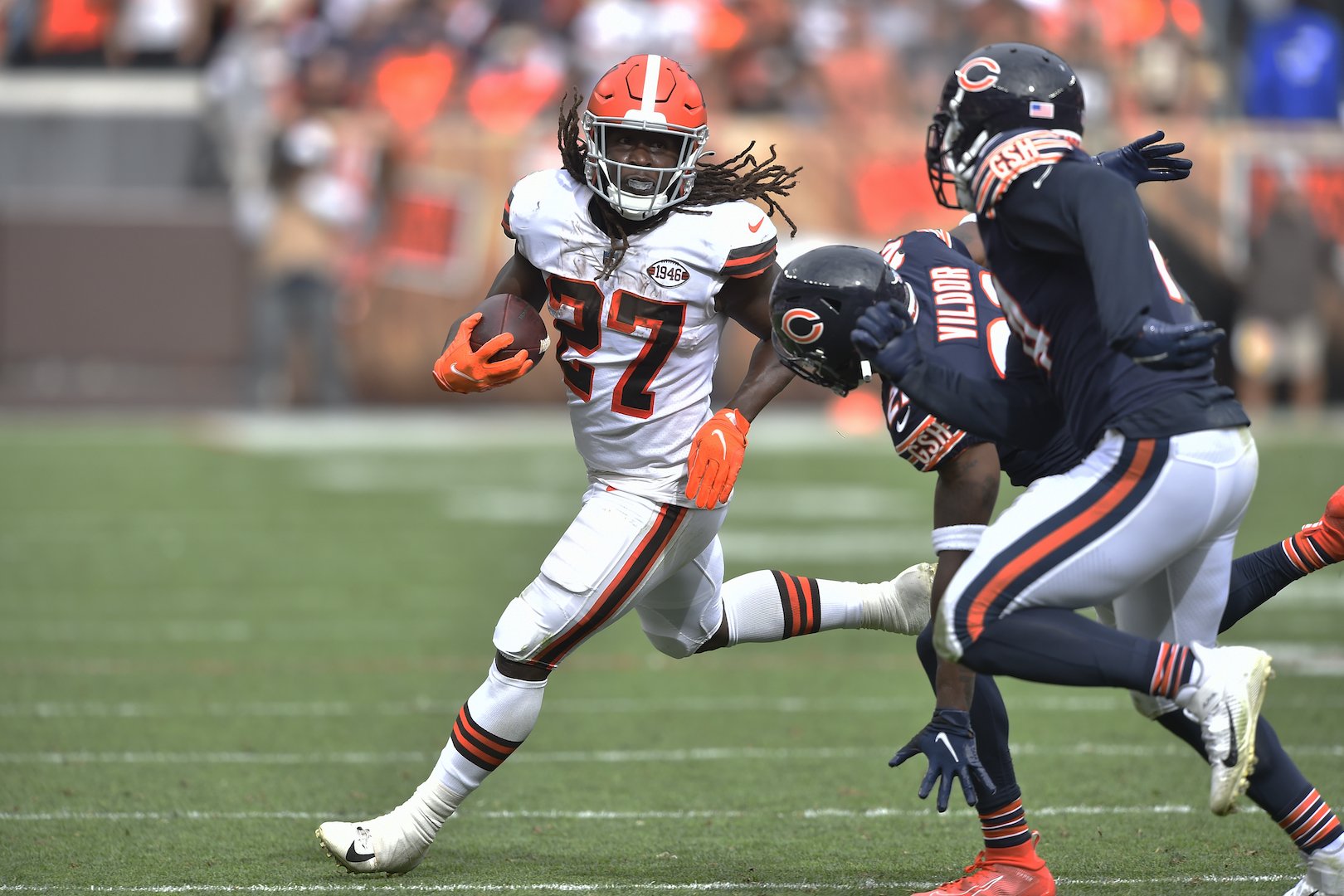 We had Allen ranked as the QB1 for Week 3 and could feel an explosion coming, and he destroyed Washington by totaling five touchdowns in a 43-21 victory. A “slow start” for Allen has him sitting with a 7:1 touchdown-interception ratio through three games, and he has a strong case to again be the overall QB1 for a matchup against Houston in Week 4.

Cleveland was dominant on the ground yesterday, and Hunt complemented ten carries for 81 yards and a score by also hauling in six-of-seven targets for 74 yards. The highlight was a 29-yard touchdown run to open the fourth quarter, and Hunt is trending back up heading into a favorable stretch (@ MIN, @ LAC, v ARI).

It didn’t result in a Jacksonville win, but Robinson was finally featured by Urban Meyer—leading to 21 touches for 134 yards and a touchdown on Sunday. While you never know based on how disappointing the Jaguars have been, there is hope Robinson will be the offensive centerpiece, and his continued effectiveness as a pass-catcher boosts his value.

Williams started the season red hot, and he took things to another level in the Chargers’ victory over the Chiefs by catching seven passes for 122 yards and two scores—including the game-winning touchdown. Talent has never been in question for Williams, and he needs to be started every week.

If Williams is red hot, Kupp is white hot (no pun intended!), as he went for a 9/96/2 line against the Bucs to follow up lines of 7/108/1 and 9/163/2 over the first two weeks. At this point, it’s just disappointing that beat writers weren’t all over the connection between Matthew Stafford and Kupp in terms of off-field preparation.

Gesicki looked to be on his way to another disappointing game to begin the season with Miami going heavy at receiver early on, but that suddenly changed in the second half when the big tight end was fed targets. Overall, Gesicki finished with ten grabs for 86 yards, and the touchdowns should soon follow.

Adams was also fed targets in Week 3—bringing in 12-of-18 looks for 132 yards and a score. Basically, the 49ers had no answers for the All-Pro wideout, and he could have had an even bigger game if Aaron Rodgers didn’t miss a couple of throws down the field.

Cleveland held the Bears to 47 yards in Justin Fields’ first career start, and they got to the rookie quarterback for nine sacks to fuel the suffocating effort. It’s looking like Chicago will be an offense to stream D/ST options against if they don’t figure things out quickly.

The six fantasy points for Tucker on his historic, 66-yard field goal is basically like another touchdown for your squad if you have him, and although we recommended waiting until the final round, he remains the only player to think about drafting earlier than that as a kicker.

Surprise of the Week: Quiet day for Arizona superstars

James Conner was able to find the end zone twice for the Cardinals, but another explosion spot for Kyler Murray and DeAndre Hopkins didn’t come to pass, as they were quiet compared to expectations. Now the group will really be tested at the start of October with matchups against the Rams, 49ers, and Browns.

Disappointment of the Week: A.J. Brown

As always, disappointments were plentiful, but Brown was arguably the biggest because he was injured early in a blowup spot versus Indianapolis. With seven receptions for 92 yards and a score so far this season (and facing a longer potential absence), the star receiver is one of the best buy-low candidates to target.

We could have went with Najee Harris here, but Chase gets the nod in a winning effort between AFC North foes. The two-touchdown performance gives Cincinnati’s top rookie four scores through three games, and the preseason concerns were clearly much ado about nothing.

The victory lap for Allen doubters was short-lived (also ridiculous coming off a 35-0 win in Week 2), and he was fully back to his high-end QB1 self with 37.22 fantasy points against Washington. Buffalo’s offense will continue firing when the Texans come to town next week.