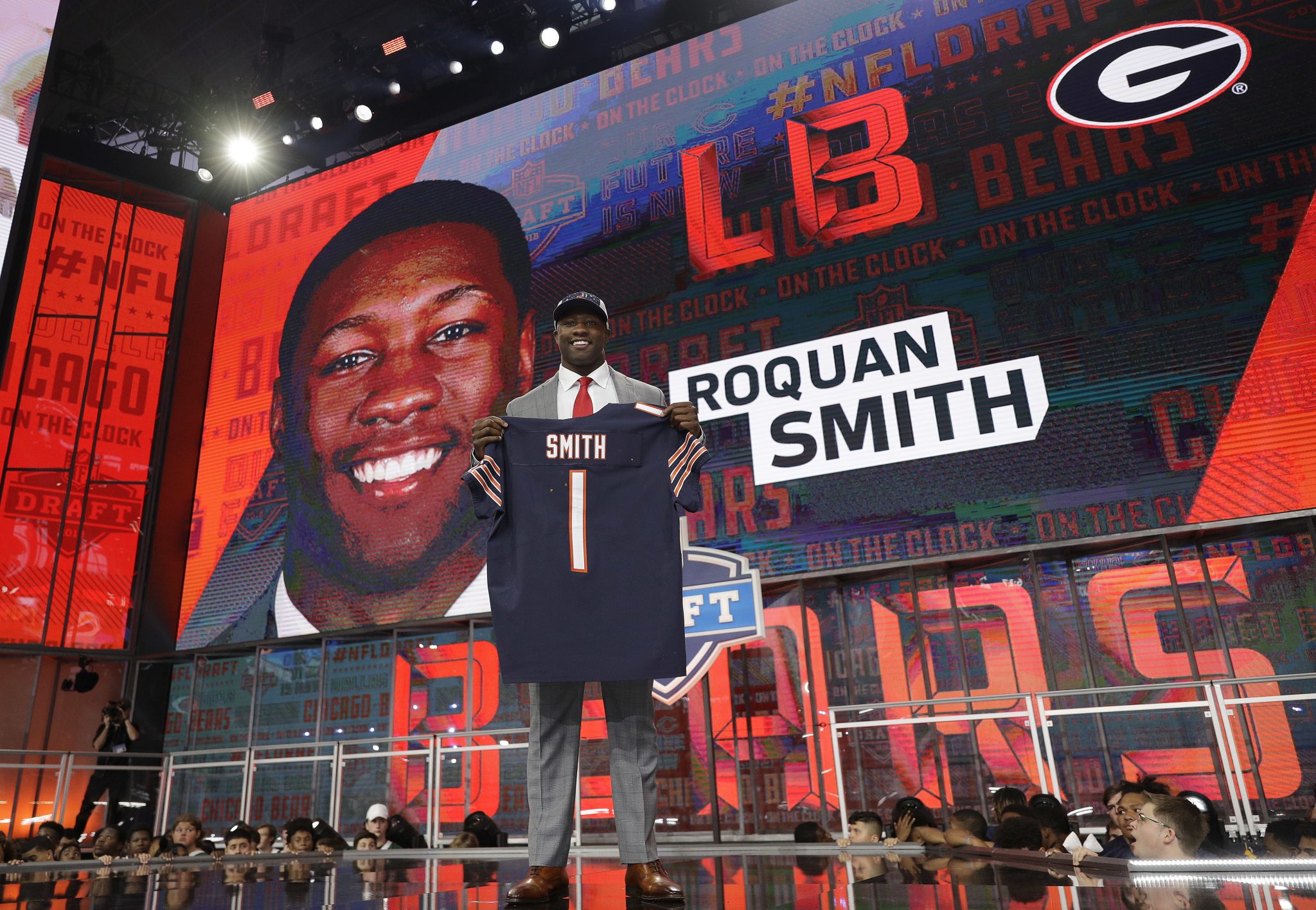 
Day 1 of the 2018 NFL Draft is in the books, and it certainly had a bunch of memorable moments, including what many will consider “reaches.” However, assigning grades before players even step on the field is probably the dumbest exercise imaginable (even though everyone does it), as we have no idea how a team will want to use the player they just drafted—and more importantly, how they will be developed. There were undoubtedly some surprising selections, though, and I think a handful of teams got really good value last night because of it. [Note: a “shock” doesn’t mean I think it was a bad pick, because again, these guys have yet to even see the field]

Bills trade up for Josh Allen at No. 7

I’ve been seemingly one of the only big supporters of Josh Allen all year, so when Buffalo was able to trade up from No. 12 to No. 7 without giving up another first-round pick, I thought it was the move of the night. Only Saquon Barkley was a better overall prospect for me in this draft class, but Bills GM Brandon Beane was able stay patient and get his guy without sacrificing the farm, which is a remarkable accomplishment. Everyone says he needs time to develop, but don’t be surprised if the gunslinger out of Wyoming makes starts and has success in 2018.

Right behind Josh Allen on my big board was Roquan Smith, and the former Georgia linebacker has the makings of an absolute superstar in the middle of Vic Fangio’s defense. It feels like the Bears are quickly going to become a perennial contender with centerpieces on offense (Jordan Howard) and defense (Smith) at two positions that have monumental legacies for the franchise.

Packers go down and up for Jaire Alexander at No. 18

In his first season leading Green Bay’s draft room, GM Brian Gutekunst deftly worked the board to go from No. 14 to No. 27 and then back up to No. 18 while gaining a first-round pick in 2019 from New Orleans. So not only did they get a future first-round pick for moving down what amounted to four spots, but they were also able to select Jaire Alexander, who NFL Network’s Mike Mayock had as the top cornerback in the draft (which I agree with). Not bad.

Patriots bolster the offensive line with Isaiah Wynn at No. 23

The assumption was the New England needed to get Mike McGlinchey or Kolton Miller as a replacement for Nate Soldier at left tackle in Tom Brady’s age-41 season, but Bill Belichick stayed put and took a more versatile player with the pick they traded away Brandin Cooks for. As I said in my scouting report for Wynn, he should “dominate on the interior but also has the ability to kick outside and be an above-average starter” at left tackle. He was my 16th overall prospect.

Ravens get their possible quarterback of the future at No. 32

I think the coverage of Lamar Jackson went a little bit overboard last night (it wasn’t a “brave” pick to make Jackson a first-rounder; it was a football pick to make the Ravens a better franchise), but Ozzie Newsome made a power move in his final draft to potentially give Baltimore their quarterback of the future. Coaching will be key, but remember, Ravens offensive coordinator Marty Mornhinweg was in Philadelphia as OC during Michael Vick’s career resurgence.

Starting two nights ago, all reports suggested the Browns would take Baker Mayfield at the top of the draft, but I wasn’t completely sold and believed Josh Allen or Sam Darnold could still be the pick—until they weren’t. It wasn’t a complete shock—I would have put the percentages at Allen (50%), Mayfield (35%), and Darnold (15%)—but it sure was a bold selection when it was actually announced. And write off the Browns if you want based on their history, but Cleveland has everything in place for him to be successful with tons of talent on both sides of the ball.

Cardinals end Josh Rosen’s fall with deal at No. 10

The Cardinals have been linked to signal-callers leading up to the draft, but I really thought they would stay put and take the best player available at No. 15 in what is expected to by Larry Fitzgerald’s final year. We know Fitz came back to chase a ring, and a rookie quarterback doesn’t help accomplish that at all, especially with Sam Bradford already in place as the clear starter. Still, you can’t fault Arizona for taking a quarterback they had a high grade on.

Saints trade up for Marcus Davenport at No. 14

Lamar Jackson to the Saints was a popular match for fans and media members alike, so when New Orleans gave up a 2019 first-round pick to move from No. 27 to No. 14, it appeared Jackson was their target. However, to the shock of everyone, Marcus Davenport’s name was announced, as Sean Payton’s team must believe he is the missing piece for a Super Bowl in 2018. And this could also mean that they are serious about Taysom Hill as the quarterback of the future.

Seahawks surprise with Rashaad Penny at No. 27

Easily the biggest surprise of the night, Seattle made Rashaad Penny the second running back off the board when they selected him with the No. 27 pick—ahead of the likes of Nick Chubb, Sony Michel, Derrius Guice, and Kerryon Johnson. Penny was extremely productive as a senior for San Diego State (2,248 rushing yards and 23 touchdowns), but he was projected, at best, to be a Day 2 selection. They must have big things in mind for him, but the offensive line still needs help.

The great moment of Ryan Shazier walking out to announce this pick combined with what Seattle just did took some of the shock away from Pittsburgh’s selection, but anyone watching on FOX or NFL Network probably heard Mike Mayock say, “Wow.” And afterwards, Mayock said how he and Daniel Jeremiah kind of looked at each other in disbelief, but the Steelers took a high character individual that might have been simply overshadowed by his brother Tremaine Edmunds (drafted by Buffalo at No. 16) throughout the pre-draft process.