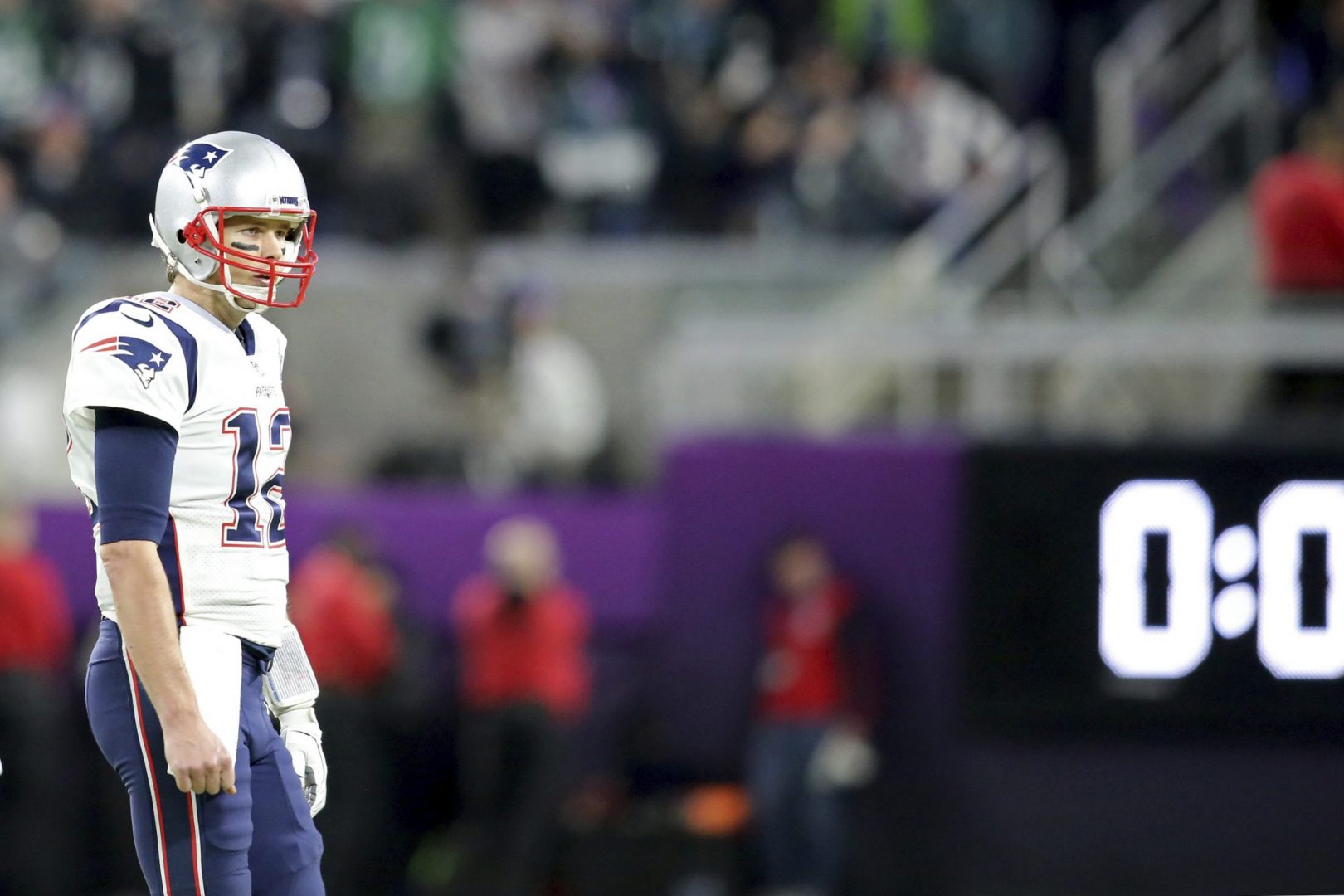 New England’s offense got a huge boost in the AFC Championship Game with Rob Gronkowski (6/79 on 11 targets) looking as healthy as he’s looked all year, and two weeks to rest up should have the 29-year-old ready to leave it all on the field for what sounds like the final game of his all-time-great career. The Patriots take advantage of the opponent’s weaknesses better than anyone, so I expect Gronk will be featured against a defense that has often been shredded by opposing tight ends, and we should see a heavy dose of him on the outside, where he can use his size to shield-off defenders.

At wide receiver, Julian Edelman leads the way for New England, and he can bolster a legitimate Hall of Fame case with another clutch playoff performance. In two Super Bowl appearances as a starter, Edelman has gone for lines of 9/109/1 and 5/87, playing a crucial role in victories over Seattle (28-24) and Atlanta (34-28). Edelman is prone to the occasional focus drop, but when the game is on the line, he will hold on to any ball he gets his hands on no matter how many defenders are around. We should see Edelman matched up against slot corner Nickell Robey-Coleman, who knows the Pats well after spending four years in Buffalo, but is 0-6 in games Tom Brady started and finished.

As for the complimentary options at receiver, Chris Hogan and Phillip Dorsett will mostly occupy Aqib Talib and Marcus Peters on the outside, and it wouldn’t be at all surprising to see New England relentlessly attack Peters considering his season-long struggles. Dorsett got behind Kansas City’s defense a couple weeks ago for a 29-yard score, and he should get at least one deep shot against Peters at right cornerback. When Hogan lines up on the left side of the formation, he will likely run a lot of short routes and comebacks to make Peters pay for playing exaggerated cushion coverage. Of course, even if they haven’t been at their best, TB12 knows that he needs to be wary of the ball-hawking tendencies of the opportunistic cornerback duo.

Maybe the coverage will be better than it’s been all year for the Rams, but the only way to really slow Brady down is by getting a pass rush. Gronkowski being a factor on the outside will make it a lot tougher for Los Angeles to contain Edelman and James White underneath, though, and the two clutch weapons have previously shined on the biggest stage. This postseason, White only caught four passes against the Chiefs, but he tied an NFL record for receptions in a playoff game (15) against the Chargers, which was partly due to the fact that Brady was getting the ball out of his hands so quickly to neutralize Joey Bosa and Melvin Ingram.

Because the Rams don’t have a stud pass rusher on the outside like the other Los Angeles team, they need to rely on Aaron Donald and Ndamukong Suh to collapse the pocket from the interior. The pair can easily ruin an offensive game plan, but Bill Belichick undoubtedly made a point of not allowing them to takeover on Sunday, and the battled-tested trio of Joe Thuney, David Andrews, and Shaq Mason should be up for the challenge. New England might also try to take advantage of Donald and Suh’s aggressiveness with screens, reverses, or even a trick play.

Overall, Brady—who has thrown for an insane 322.0 yards per game with an 18:5 touchdown interception ratio in the Super Bowl—will take what the defense gives him, but Gronk, Edelman, and White will be his main options in key situations. There is absolutely no reason to expect the G.O.A.T. won’t be at his best as he looks to claim his sixth Lombardi Trophy.

There is certainly a chance the Patriots decide to air it out 50+ times regardless of game flow because of how great their quarterback is, but this is the first time since the start of the dynasty that the running game has been as effective as it has been. Led by Sony Michel (53 carries for 242 yards and five touchdowns in two playoff games), New England can simply control the clock by feeding their first-round pick, who is running behind one of the league’s best offensive lines.

Rex Burkhead will also have a significant role after handling 16 touches—including the overtime game-winner—in the AFC Championship, and it was interesting to see him featured down the stretch over Michel. The veteran likely has the trust of the coaching staff, but his versatility is also a factor keeping him on the field in big moments. James White should be a bigger weapon in the passing game and probably won’t get more than five-to-eight carries if the Pats don’t fall behind.

Defensively, the Rams have been considerably more stout in the playoffs (2.3 yards per carry allowed) than in the regular season (league-high 5.1 yards per carry allowed) against the run, but I think New England’s line should be able to move an undersized front that includes Mark Barron (six-foot-one, 214 pounds) and Cory Littleton (six-foot-three, 227 pounds) at inside linebacker. If Ndamukong Suh doesn’t play like he has over the past two games, it could be a frustrating night for Wade Phillips’ defense.

Los Angeles will obviously do all they can to contain New England’s offense, but I’m sure Sean McVay and Jared Goff are anticipating they might need to win a shootout this weekend. Fortunately, that’s something they have been comfortable with in 2018, and Goff’s confidence should be at an all-time high following the team’s comeback victory over the Saints. As if erasing a 13-0 deficit wasn’t impressive enough, it came in perhaps the most intimidating environment imaginable. There are still Goff doubters because that’s unfortunately just how the world is today, but reaching the Super Bowl without his favorite receiver (Cooper Kupp) is a Brady-esque accomplishment, and a win on Sunday would undeniably put him in the upper echelon of NFL signal-callers.

I think this will be a game that Kupp is really missed in, though, because McVay’s offense might be just one weapon short against a defense that has a few options when it comes to defending Robert Woods and Brandin Cooks. The blueprint to stop Cooks should be very similar to what we saw against Tyreek Hill in the AFC Championship Game, which means constant help over the top, and Bill Belichick might even decide to divert even more resources to stop the former Patriot since there isn’t a Travis Kelce to also worry about.

The matchup of the game might be Robert Woods against Stephon Gilmore in one-on-one coverage, and the two know each other well after spending four years together in Buffalo. Two weeks ago, Sammy Watkins had a 100-yard game as he mostly did battle with Gilmore, and Kansas City probably would have done well to target Watkins more than they did; I don’t think a lack of targets will be an issue for the Rams as they do their best to funnel the passing attack through Cooks and Woods.

That said, as Sean McVay and others have alluded to this week, the Patriots could show up on Sunday with a completely different approach than expected. In fact, I think there’s a very good chance that’s the case, with New England opting to play a bunch of zone coverage because of Goff’s shredding of man coverage for his best three games in the regular season (465 yards and five touchdowns v MIN; 391 yards, three touchdowns, and one interception @ NO; 413 yards and four touchdowns v KC). If so, the former No. 1 overall pick just needs to be sure he doesn’t get fooled or predetermine throws.

I think the potential difference-makers that need to step up are Josh Reynolds and Gerald Everett. In the NFC Championship Game, both guys made clutch plays in the overtime win, and Goff will need to trust them once again to win some favorable matchups. Everett in particular could bring some big-play ability against a linebacker group that doesn’t have exceptional speed, and Tyler Higbee will look to pickup some chunk yardage on play-action passes.

You have to respect Todd Gurley (knee) for insisting he is healthy, but there is simply no chance the Rams would have given their superstar back just five touches in a conference championship game if his health was at 100%. However, I expect Gurley to be closer to his normal self with two weeks to rest for the Big Game, so he and C.J. Anderson will look to set the tone behind a dominant run-blocking offensive line. Anderson is one of a handful of Rams with Super Bowl experience, and he has previously helped lead Denver to a couple huge wins against the Patriots, including a 19-touch, 90-yard playoff effort in January of 2016.

Unlike Super Bowl LII when the Patriots basically let the Eagles to run the ball—27 times for 164 yards (6.1 YPC clip) and one touchdown—instead of having Nick Foles beat them (which he did anyway), New England can probably put more defenders in the box because Cooper Kupp’s absence simply allows them to. Getting a lead and not allowing Trey Flowers and company to continually rush upfield would be big, especially considering the struggles at times for the Rams’ pass protection.

If Los Angeles is going to topple a dynasty (though that’s hyperbole, as New England will almost certainly be back), they might need some special teams magic from John Fassel’s group, which shouldn’t be overlooked. Johnny Hekker is basically just as well known for his throwing as he is his punting, and Greg Zuerlein might put the Pats at a rare disadvantage when it comes to the kicking game.

On the other side of the field, Cordarrelle Patterson will look for at least one opportunity to get his hands on a kick return, and Julian Edelman maximizes his punt returns to set up the offense with good field position. Stephen Gostkowski remains one of the best kickers in the league, but he is still looking for the signature kick that New England hasn’t really had this decade.

Overall, both teams should feel good about their chances if they need a kick to win the game in the final seconds.

We are unlikely to ever see another dynasty reach the accomplishments of Tom Brady and Bill Belichick—who still have four more years together if TB12 reaches his goal of playing until he’s 45—but if there’s any franchise that could match them, it’s the Rams with their 24-year-old quarterback and 33-year-old head coach. I expect McVay to have a great game plan in place and for Goff to execute it, but again, the loss of Cooper Kupp cannot be overstated.

Despite a couple December slipups, the Patriots have no real weakness on either side of the ball, and it’s nearly impossible to pick against them for as long as Belichick is on the sideline and Brady is at quarterback.

Get Fantasy Consigliere now for access to recommended picks for the entire 2019 NFL Season! It’s an opportunity you don’t want to miss out on after a 15-1 ATS stretch to close out this year.