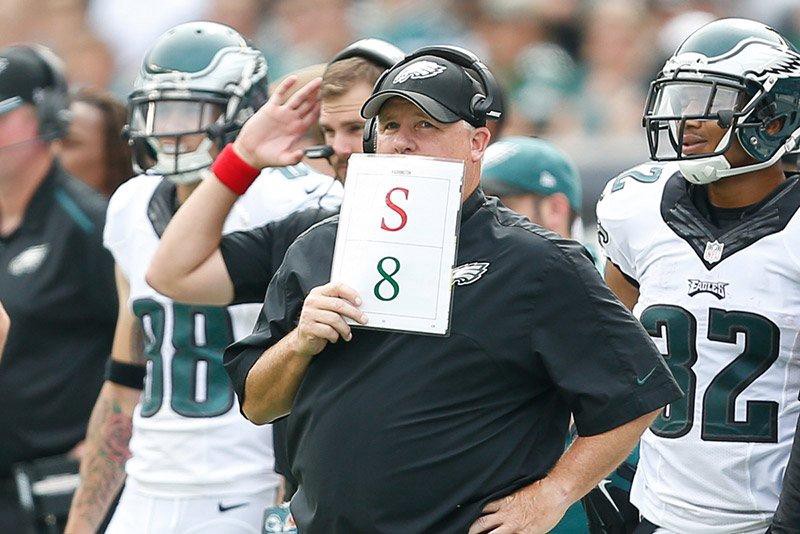 The Eagles Made a Huge Mistake Firing Chip Kelly


December 29, 2015. My phone buzzed. An alert from the Philadelphia Eagles.

I was sure that Chip Kelly gave the Eagles a great chance to win a Super Bowl. He just needed time to build the team. I could not have been more disappointed when he was let go.

Kelly brought unique ideas and techniques to Philadelphia. A fast-paced offense unlike anything that the NFL has seen. A sports science program which kept the Eagles among the healthiest teams in the league for this three years there. And the “growth mindset,” among other things.

The growth mindset, created by Stanford professor Carol Dweck, basically embraces hard-work, progression, and improvement. The growth mindset is opposed by the fixed mindset, basically that you are what you are — it limits you and stunts growth. Kelly recommended Dweck’s book, “Mindset: The New Psychology of Success,” to all his players.

During one of his 2014 offseason press conferences with the Eagles, Kelly said “Everybody has the same amount of time during the day, and you can either spend your time or invest your time and that’s what we are trying to get our players to understand.”

He gave his players the responsibility of determining how good they wanted to be, both individually and as a team. Some critics say that Kelly wasn’t “rah-rah” enough and did not rally his players. Tell me, is Bill Belichick a “rah-rah” guy? NFL players are obviously professionals — they’re grown men and they get paid millions to do their job. If they need their coach to rile them up, they’re probably not players you want on your team.

Kelly’s three years with the Eagles were filled with wisdom like spending versus investing time. He is one of the most impressive people out there. He is always focused on success and how to achieve it.

Critics also say that almost all the players hated Kelly and did not want to play for him. If that was the case, why didn’t all these players come out and criticize Kelly after he was fired? The problem is, the media can just say whatever they want to get attention and get away with it. If the majority of the players could not stand Kelly, then at least one of them would have come out with harsh criticism. None did.

(After he was traded, LeSean McCoy made some outrageous and irresponsible comments, suggesting Kelly was a racist. He was just sour that he was traded. From then on, however, there was a narrative that Kelly couldn’t relate to his players. Jason Peters — a good friend of McCoy — did say he likes new head coach Doug Pederson better than Kelly. Also, offensive tackle Lane Johnson said that the practices were too hard under Kelly, but center Jason Kelce shot that down quickly.)

I went to the first “Black Sunday” game against the Giants on Sunday Night Football in 2014. They destroyed the Giants 27–0. They sacked Eli Manning 8 times. The Linc was full of energy, as the Eagles completed their first shutout since 1996. Who says Kelly’s teams can’t play great defense?

After the game, Kelly jumped on left tackle Jason Peters back as they were going off the field, in celebration of the win. Clearly there had to be some kind of hidden racist agenda there.

So why the media, and in turn, the fans turn on Chip Kelly? Some people got frustrated with Kelly’s answers during his press conferences — for sometimes using lawyer speak and also for not saying the things that people wanted to hear. People would get mad and upset for his answers. (They said he didn’t take responsibility for the below average season, despite the fact that Kelly said it was “100%” on him that they didn’t make the playoffs.) The problem is that most of the Philadelphia Media has no idea what they’re talking about. It is not Kelly’s style to appease them by answering their stupid questions.

When the Eagles were winning games, it was fine. But the minute they started losing, the media switched on Kelly. Some reporters said the players were turning on him. From there, the fans turned on him.

The Philadelphia media also turned on Andy Reid and got frustrated with him towards the end of his time with the Eagles. Obviously, Andy Reid is a great coach and is doing an excellent job with the Kansas City Chiefs. Maybe it was just time for both the Eagles and Reid to move on from each other, but it’s not like he forgot how to coach. Of course, he fell on the sword and moved on to Kansas City.

Kelly was also heavily criticized for his personnel decisions. First of all, he did not even want to be in charge. Kelly had someone for personnel — Tom Gamble. However, after the 2014 season, current Eagles executive VP of football operations Howie Roseman got Tom Gamble fired, which led to Roseman being removed as GM (Kelly obviously did not and could not trust him) and Kelly hiring Ed Marynowitz to be the head personnel guy as VP of Player Personnel.

It is safe to assume that Roseman had a lot to do with Kelly’s abrupt firing. Besides Gamble, he has gotten other former members of the Eagles’ front office fired. Former members of the front office have spoken on it. Despite the team becoming a disaster shortly after he became General Manager in 2010, Roseman remained. For some reason, Lurie really, really likes Howie Roseman.

So obviously Lurie (and most fans) are OK with Roseman being in charge again, but hated Kelly’s 2015 offseason moves.

In reality, Kelly’s moves were not bad at all. He swapped Nick Foles for Sam Bradford. He traded running back LeSean McCoy for linebacker Kiko Alonso (was clearly not 100% all season after also coming off a torn ACL), which cleared up a lot of cap space to make other moves. Then, he brought in a true #1 cornerback — yes, Byron Maxwell is a good corner. Maxwell may not have tackled that well, but he can cover. (Julio Jones roasts everyone so let’s not act like he can’t cover because he got burnt by Julio Jones. Since Week 2, Maxwell played like a number one corner.) He also signed DeMarco Murray and Ryan Mathews to pound the rock. There was one problem — they couldn’t block anyone.

This was the crux of the issue for the 2015 Eagles. The offensive line play (particularly interior O-line) was bad. Kelly likely would have liked to run inside zone, but they simply could not block well enough to run inside. It’s that simple. There would have been longer drives to keep the defense off the field, and it would have led to play action that would have been devastating for opposing defenses. Also, Bradford would’ve been able to show off his great accuracy and pick defenses apart if he had more time to throw.

So you could make the argument that Kelly miscalculated by not signing or drafting better offensive linemen (an early-season Lisfranc injury to starting guard Andrew Gardner definitely didn’t help.) But that’s why you give someone more than a year on the job. Building a team takes time. It certainly doesn’t happen in one year. There was so much turnover, and despite everyone getting their hopes up based on their scorching pre-season performance, it was unrealistic to believe they would be Super Bowl contenders with a new quarterback coming off an ACL injury, the loss of their number one receiver, and two new running backs.

Kelly did show he does know what he’s doing in terms of selecting players. Last year’s draft might turn out to be their best in recent memory. First-round pick Nelson Agholor suffered a high ankle sprain during the season, and was never the same after that, but he is a very hard worker, polished route runner, and has massive explosiveness and upside. Second-round pick Eric Rowe showed a lot of potential in his playing time as a rookie last year, but was traded to the New England Patriots despite playing well after his Thanksgiving performance against Calvin Johnson; if the Patriots see something in him, chances are he is good. And third-round pick Jordan Hicks was a huge difference maker for the defense until his season-ending pectoral tear. Time will tell, but this draft might become the Eagles best draft in the past 10 years. Of course, I could be wrong; we’ll see in a few years.

So on December 29, Kelly was fired. The next day, Jeffrey Lurie held a press conference. And I lost all respect for him.

Lurie suggested that Kelly lacks “emotional intelligence.” Meanwhile, he did not let Kelly speak to his players before he left. In fact, the players found out either through the mobile app (like I did), through the media or TV, or through being told by someone else. So you fire the head coach of the team, but don’t tell any of the players — who’s the one that really lacks “emotional intelligence”?

Also, a little over a year before the firing, Lurie saw Kelly as his head coach for the next 10-plus years.

Then of course Howie Roseman was right back in charge. He has Lurie’s ear. Anyone that doesn’t think he had a lot to do with Kelly’s firing is kidding themselves. Roseman now has more power than ever and bought himself at least a couple more years of collecting a paycheck after he traded up to number two overall in the 2016 Draft to get North Dakota State quarterback, Carson Wentz.

The San Francisco 49ers hired Chip Kelly a few weeks after he was fired by the Eagles. At the introductory news conference, Kelly said that many of the Eagles players reached out to him when he was fired. He said he’s “not one that looks at what’s reported, what’s not reported,” which says everything about how the majority of his players truly felt about him.

From Bill Belichick to Troy Aikman, many non-media types — people that have actually coached and played the game at the highest level — think that firing Kelly was a bad decision by the Eagles.

While the 49ers roster needs a lot of work, Kelly will do just fine. He’s a self-proclaimed “football guy” that will use the growth mindset to continue to learn and grow, while striving and putting all his focus towards the ultimate goal — a Super Bowl.

Something tells me the Eagles will have to wait a lot longer than he will.

Many fans and media members throughout this saga have been quick to call Chip a terrible coach, or a fraud, or any number of things. They think he’s not cut out for the NFL. They think he should be coaching in college.

During the 49ers press conference, Kelly said that Bill Belichick, Tony Dungy, Jon Gruden, Bill Parcells, Nick Saban, and Bill Polian reached out to him after he was fired — showing their support, with some encouraging him to stay in the National Football League.

But hey, what do those guys know?