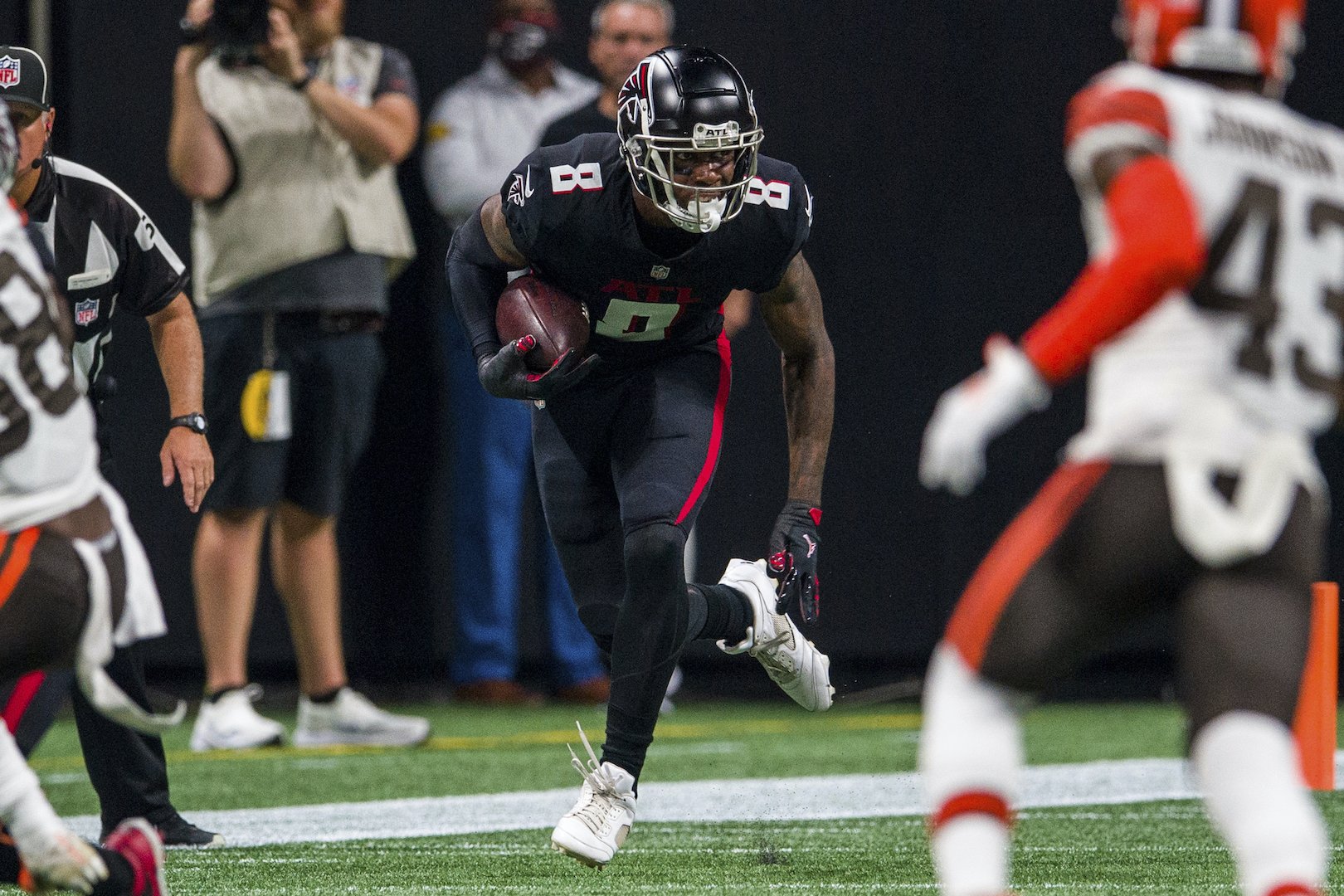 QB Marcus Mariota: The overall offensive depth remains a question mark in Atlanta, but Mariota will do damage with his legs, has two top-ten picks in Kyle Pitts and Drake London, and is familiar with Arthur Smith’s system from their time together in Tennessee. Maybe the Falcons will want to get a look at third-round pick Desmond Ridder at some point, but we believe in Mariota’s talent to play well as the starter, and he will carry fantasy upside as a QB2 option for however long he’s under center. For those planning to draft him in Superflex leagues, just know the schedule over the first two weeks is brutal (v NO, @ LAR).

QB Desmond Ridder: An experienced signal-caller with high intelligence, Ridder can be a future starter if his accuracy gets more consistent, and the strength of the 2023 quarterback—combined with the Falcons potentially drafting high—could lead to him getting a shot to play this season. Preseason games and training camp will be key to evaluate his likelihood of making starts in 2022.

RB Cordarrelle Patterson: Patterson was almost Christian McCaffrey Lite in 2021, and Arthur Smith showed he knew how to unlock the offensive potential of the all-purpose weapon better than anyone to date. That being said, the production falling off a cliff in the fantasy playoffs is difficult to shake—as Patterson rushed 27 times for 60 yards (2.2 YPC) and one touchdown with just five receptions for 28 yards from Week 15 through Week 17 (then turned five touches into 12 yards in the season finale). If he sees less work as a traditional running back, the cheat-code status could fall off for the veteran.

RB Damien Williams: The emergence of Khalil Herbert shifted Williams to the No. 3 option in Chicago’s backfield last season, but he showed he still has plenty of juice after being a COVID opt-out in 2020—including back-to-back games of extended action when he turned 28 touches into 154 yards and two touchdowns (both happened to be wins). The Falcons releasing Mike Davis and using Cordarrelle Patterson less as a traditional ball-carrier opens the door for touches in Atlanta, and Williams has shined whenever given the opportunity.

RB Tyler Allgeier: Including four games with 190+ rushing yards and multiple scores, Allgeier put up some monster numbers in his final season at BYU, and there is a chance for him to earn an early-down role for the Falcons as a rookie. Although he broke quite a few long runs in college, Allgeier only running a 4.60-second 40-yard dash impacted his draft stock some, and he profiles as a grinder for Atlanta—and another large skill-position player at 224 pounds to join Kyle Pitts and Drake London.

WR Drake London: London was the first wideout off the board in the 2022 NFL Draft, and the Falcons are putting together a Monstars-style offense by pairing him with last year’s No. 4 overall pick Kyle Pitts. The rookie will eventually carry double-digit touchdown upside at the next level, but we just have to look at Pitts last season (with one score) to see it’s easier said than done, and Marcus Mariota is expected to be more of a playmaking facilitator rather than an aggressive gunslinger that would maximize London’s numbers. The No. 8 overall pick should be an upside FLEX as a rookie.

WR Bryan Edwards: Edwards is a talented player that never really saw an expanded opportunity with the Raiders despite 10.3 yards per target and 17.0 yards per reception to begin his career, so he’s certainly a name to monitor this summer. The built-in chemistry with Marcus Mariota from their time together in Las Vegas is reason for added optimism about Edwards, and receivers often take until their third season (or beyond) to reach their NFL potential.

WR Olamide Zaccheaus: Zaccheaus has averaged an impressive 14.7 per reception and scored five touchdowns on 90 career targets, and he’ll have a chance to carve out a decent role with a different skillset than the bigger weapons in the passing attack. The 24-year-old could remind Mariota of guys like Harry Douglas and Kendall Wright from his time with the Titans

WR Auden Tate: It seems fairly clear now that Atlanta signed Tate with the expectation that he would be Drake London’s stand-in for the sake of offensive continuity if an injury ever occurs, so he’s gone from a potential dynasty buy to a clear backup since the draft. In ten starts (12 games) with the Bengals in 2019, Tate caught 40-of-80 targets for 575 yards and one touchdown.

WRs Damiere Byrd and Frank Darby: The final two spots at wide receiver should be a battle between these next two pairings, and we’d give the edge to Byrd here between a couple of New Jersey natives. In each of the past three years, Byrd has made contributions with the Cardinals (32/359/1), Patriots (47/604/1), and Bears (26/329/1), while Darby caught one pass as a rookie in 2021.

WRs KhaDarel Hodge and Geronimo Allison: Despite the height difference, Hodge (five-foot-11) and Allison (six-foot-three) both profile as similar on-the-ground possession targets that can make plays as if called upon. Allison hasn’t caught a pass since leaving the Packers following the 2019 season (he was a COVID opt-out), so Hodge could have the advantage.

TE Kyle Pitts: Called a “superstar” by Bill Belichick last year while being compared to “a cross between Tony Gonzalez and Julio Jones,” Pitts has a phenomenal rookie campaign to finish as the overall TE5 despite just one touchdown on the year. Maybe there is some sort of Atlanta curse the keeps the freakish offensive weapons (Julio Jones before him) out of the end zone, but Pitts should be a high-end TE1 option with major upside in the touchdown department based on his skillset alone. He’ll be a mismatch out wide, in the slot, and as a traditional tight end.

TE Anthony Firkser: Arthur Smith has preferred using heavy personnel groupings dating back to his time as offensive coordinator of the Titans, and that included when he helped Firkser catch 39 passes for 387 yards in 2020—even with Jonnu Smith going for a career-best 41 receptions, 448 yards, and eight scores. The familiarity for Firkser with both the offense and quarterback Marcus Mariota should put him in play as a weekly flier behind Pitts.

Again, Edwards has built-in chemistry with Marcus Mariota from their time together with the Raiders, and even if the trade price was low, the former third-rounder was targeted by the Falcons this offseason. On just 59 targets last year, Edwards had five games with 60+ yards and three games with 80+ yards.

We could have gone with Marcus Mariota, Kyle Pitts, or Edwards again here, but London should at least be a top-20 dynasty option at wide receiver as a six-foot-four target comparable to Mike Evans. There would seem to be a decent chance of the Falcons getting someone like Alabama quarterback Bryce Young in the 2023 NFL Draft, which would increase the touchdown outlook of London—who has perennial double-digit scoring upside. Overall, he possesses a rare combination of physicality and fluidity at his size.

Bryan Edwards led all wide receivers in receptions per broken tackle last season (5.7), edging out Deebo Samuel (5.9). He also ranked No. 11 in average depth of target (14.0) and dropped just 1.7% of his targets.