WOLF SPORTS ALERT There may be temporary bugs due to site performance upgrades. Thank you for your patience!
Home / frontfantasy / 2022 Fantasy Football Preview: Buffalo Bills 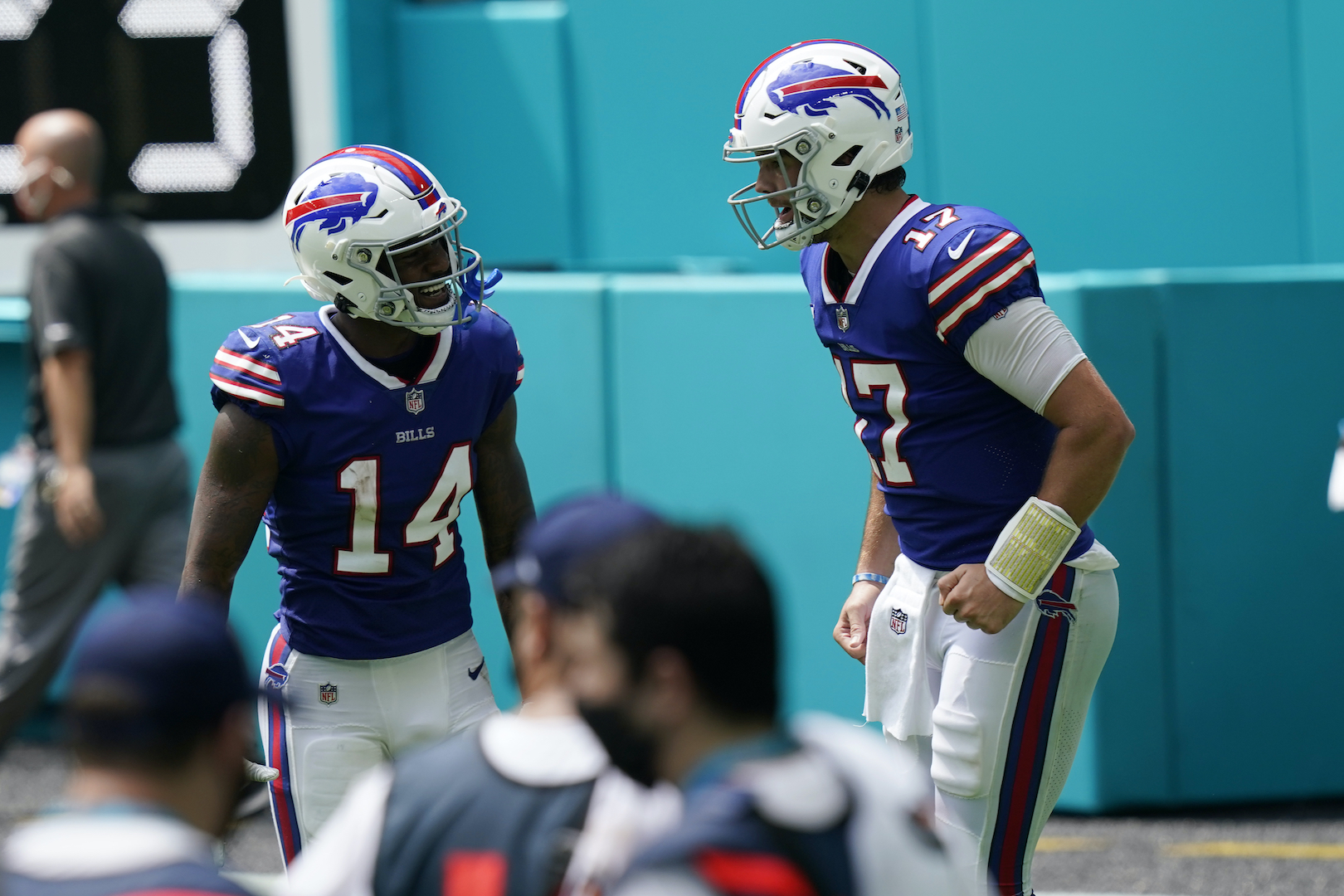 QB Josh Allen: The No. 1 overall fantasy player in each of the past two seasons, Allen has fully developed into a top-tier pinpoint passer to complement the unique playmaking ability he brings to the quarterback position. Buffalo’s second-round selection of Georgia running back James Cook—a dynamic weapon in the passing game—shows a strengthened commitment to a pass-heavy attack despite losing offensive coordinator Brian Daboll to the Giants. And although Sean McDermott wants his quarterback to run less, Allen enters the year with sky-high confidence to rip opponents apart through the air following a couple of all-time great playoff performances. He’s our clear No. 1 quarterback in redraft and dynasty leagues.

RB Devin Singletary: Last season, Buffalo finally committed to Singletary down the stretch with 102 carries for 430 rushing yards and eight rushing touchdowns over the final six games (including playoffs). The lead back for the Bills is very appealing with Josh Allen at the controls, but Singletary is being hurt by the selection of James Cook in Round 2—as the rookie will take a significant amount of work in the passing game. There is upside, but consider the starter more of a volatile FLEX than he otherwise would have been if Buffalo didn’t draft Cook.

RB James Cook: Cook landed in the perfect spot to reach his full potential at the next level, as he’s a very dangerous receiver, but—not to be mistaken for his brother Dalvin—probably won’t become a workhorse, 20-carry feature back in the NFL (he only had five games with double-digit carries in four college seasons). The receiving ability is what matters most in Buffalo, and Cook can quickly become a favorite of Josh Allen to make defensive coordinators “nervous” (the word used by Alabama head coach Nick Saban when discussing him). He gets a clear boost in full PPR leagues.

RB Zack Moss: Moss started last season as a healthy inactive and ended it by seeing just one touch in two playoff games, so he has some work to do if he’s going to carve out a role in 2022. The former Utah standout did have a three-game stretch in which he scored four touchdowns early last year, but he’s clearly behind Singletary for early-down snaps and at least Cook for receiving snaps.

RB Duke Johnson: The landing spot for Johnson was perfect until Buffalo drafted James Cook, and he’ll now need to make the team as the No. 4 running back (something the Bills have had for special teams). The best-case scenario for the veteran would be operating as the pass-game insurance to Cook for continuity in the event of an injury.

WR Stefon Diggs: Through two seasons with Buffalo, Diggs has been extremely steady with target totals of 166 and 164, and we believe an expanded role for Gabriel Davis as the No. 2 wideout will eventually open things up for a top threat who has understandably contended with double coverage on the outside. Overall, fantasy owners should be very comfortable with Diggs as a matchup-proof WR1, and we’d anticipate the ceiling games returning to 2020 levels when he had seven 100-yard performances (compared to just two such games in 2021). Since joining the Bills, no one in the league has more targets (330) than Diggs.

WR Gabriel Davis: The clear No. 2 wideout in a Josh Allen-led offense, Davis absolutely exploded with 201 yards and four touchdowns in the playoff loss to Kansas City, and he should be able to feast on single coverage with Stefon Diggs continuing to draw defenders his way. Some have said Jamison Crowder will be the No. 2 wideout with the hype for Davis being too high, but we completely disagree, and everything out of Buffalo seems to suggest they believe Davis can become a star.

WR Jamison Crowder: Even though Crowder is the natural replacement for the role Beasley leaves behind (112 targets in 2021), it’s highly unlikely he gets the same number of targets with Gabriel Davis primed for a leap and rookies James Cook and Khalil Shakir taking a chunk of vacated looks, too. That said, the former division rival should be boosted in full PPR leagues and could be a weekly FLEX in deeper leagues catching passes from Josh Allen.

WR Isaiah McKenzie: The offensive production for McKenzie has been very modest throughout his career—mostly handling spark-plug touches (usually less than five per game) with limited opportunities for more. However, you can’t ignore his performance in a December win over the Patriots last year with 11 receptions (on 12 targets) for 125 yards and a touchdown, and he previously shined to close out the 2020 season with three total touchdowns (including 6/65/2 through the air) when featured. McKenzie at least has a role solidified on perhaps the NFL’s best offense, and he could push Crowder for snaps in the slot.

WR Khalil Shakir: Shakir projects as a tough slot receiver that can do some damage with the ball in his hands, but is there a path to redraft value without an injury? We’d say the rookie can have a big game or two in perhaps the NFL’s best offense, but they might be unpredictable. He could be more of a dynasty investment that will hope to prove himself as the long-term No. 3 wideout behind Diggs and Davis.

WRs Tavon Austin and Marquez Stevenson: Stevenson was drafted last year to be the primary returner and occasional field-stretcher, but now the room is more crowded—including the addition of Austin. The edge could end up going to the former No. 8 overall pick as the No. 6 wideout, and it’d be fun to see what kind of plays can be dialed up if Austin is on the field at the same time as Isaiah McKenzie.

TE Dawson Knox: Drops were still a bit of an issue, but Knox—targeted just 71 times last year—has room to make another jump if newcomers like James Cook, Jamison Crowder, and fellow tight end O.J. Howard don’t take too many opportunities from the 184 targets vacated by Cole Beasley and Emmanuel Sanders. Last year, the former third-rounder was in a four-way tie for the most touchdowns among all tight ends (nine), and Knox’s scoring upside makes him a very good choice to pair with another upside scorer in best ball drafts.

TE O.J. Howard: The promise shown by Howard early in his career—with 11.5 yards per target, 16.6 yards per reception, and 11 touchdowns across his first 24 games—can still be unlocked in his second full season back from a torn Achilles, but it will be in a new city after signing with Buffalo. However, if you’re going to leave Tom Brady, Josh Allen is arguably the next best quarterback to play with, and Howard could be the rare handcuff-type option behind Dawson Knox at tight end.

We’d be surprised if Davis didn’t see his stock climb over the next three months, but WR36 feels like a floor ranking, and the ceiling is worth taking a shot on above ADP. On 125 targets through two seasons, Davis has scored 13 touchdowns, and he can have a monster season if the scoring luck continues while putting everything together as a full-time player.

Diggs has finished as the overall WR3 (2020) and overall WR7 (2021) over the past two years, and dynasty owners can take advantage of those anticipating a drop in production with the All-Pro wideout turning 29 in November—which we don’t see happening anytime soon on the heels of a four-year, $96-million extension. Gabriel Davis emerging across from Diggs would only be a benefit to draw double coverage away, and his game not being overly reliant on athleticism or explosiveness bodes well for his future outlook.

In nine career primetime appearances, Josh Allen has averaged 267.6 passing yards and 2.7 passing touchdowns per game. The Bills are scheduled for five primetime games this season, plus a matchup on Thanksgiving (12:30 PM ET) and two late-season games yet to be scheduled.