WOLF SPORTS ALERT There may be temporary bugs due to site performance upgrades. Thank you for your patience!
Home / frontfantasy / 2022 Fantasy Football Preview: Chicago Bears 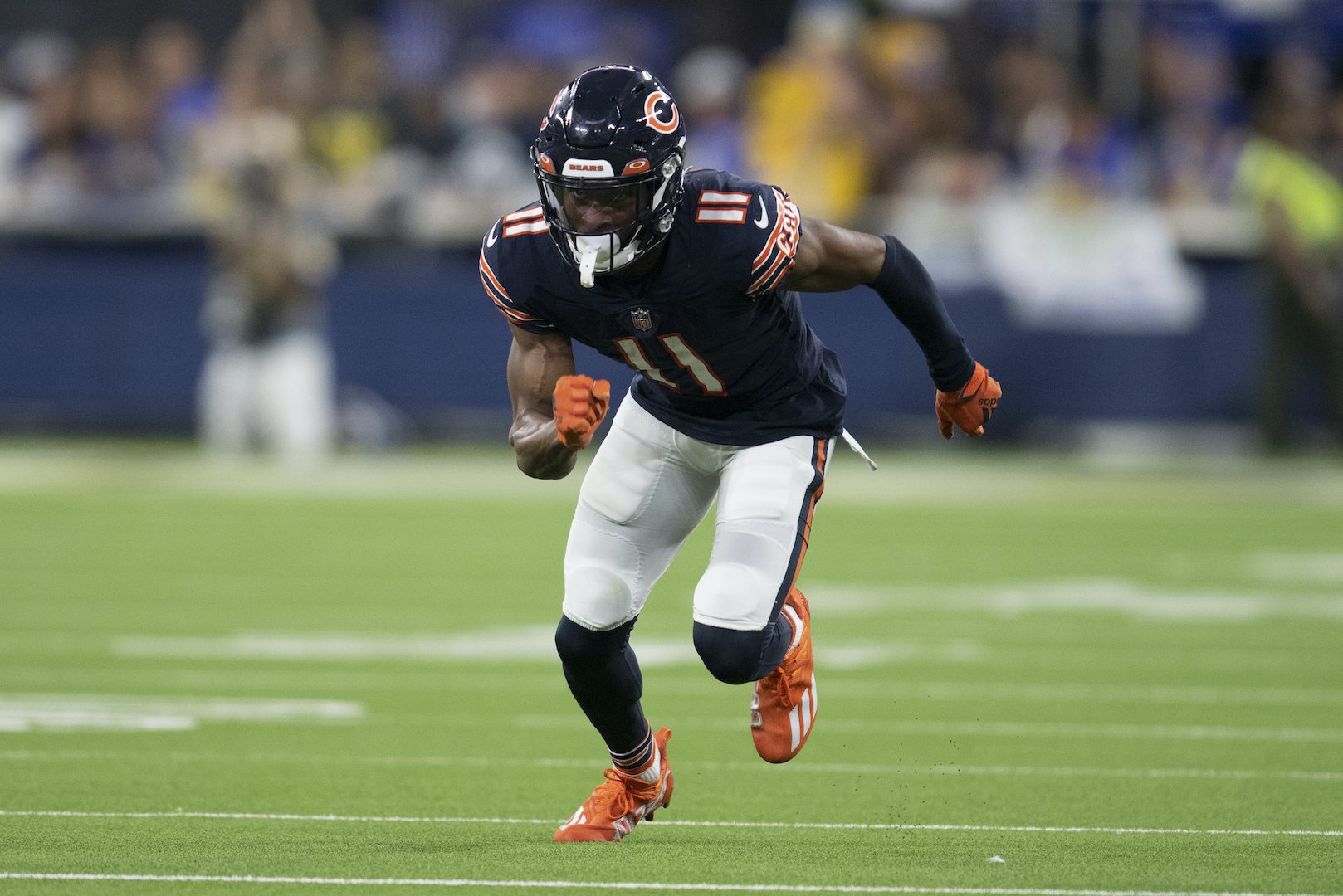 QB Justin Fields: Chicago had a bit of a teardown this offseason by losing Allen Robinson and James Daniels, and much of Fields’ fantasy and real-life success could hinge on his ability to produce as a runner. The good news is that he’ll enter 2022 as the clear starter with a chance to prove himself as the long-term answer, and hopefully the offense allows him to get on the move more often. Another season of substantial struggles is a real possibility, though, and we’d honestly recommend selling him in dynasty leagues—especially if valued as a top-ten option (the ranking on more than a couple of mainstream sites).

RB David Montgomery: Montgomery has been extremely consistent with 1,074+ total yards in all three seasons since entering the league, and the offense appears set to revolve around him under a new regime. Khalil Herbert showed he’s deserving of meaningful work, but on a run-heavy team, Montgomery should again eclipse 250 touches—and with ease if he stays healthy for 17 games. It doesn’t hurt that the Iowa State product has a clear fan in new head coach Matt Eberflus, and Chicago expects to be tough and physical on the offensive line, which fits the all-business style of Montgomery when he puts the pads on.

RB Khalil Herbert: Herbert was tremendous when featured in place of an injured David Montgomery last season, and the gritty identity the new regime is trying to establish in Chicago should result in enough carries to contribute as a potential FLEX option for good matchups. Plus, new offensive coordinator Luke Getsy coming from Green Bay is reason to believe multiple backs can hold value, and the Bears should know Herbert can also contribute as a receiver to make it a heavy two-man rotation rather than giving too much work to Darrynton Evans and rookie Trestan Ebner on passing downs.

RBs Darrynton Evans and Trestan Ebner: The unfortunate Achilles tear for Tarik Cohen leaves an opening for some receiving work in the Chicago backfield, and Evans and Ebner should have a very close battle this summer. That said, it’d likely take an injury to one of Montgomery or Herbert to have PPR value; we’d give the edge to Evans in the competition as a speedy former third-round pick that struggled to stay on the field with Tennessee.

WR Darnell Mooney: The work ethic of Mooney was highlighted in last year’s article as our best 2021 value in redraft leagues, and he’ll now enter 2022 as Chicago’s clear No. 1 wideout following the departure of Allen Robinson. Of course, Mooney had already taken the honor last season with a 1,000-yard campaign, but it will be interesting to see how he handles the added attention from opponents without Robinson on the field. Seeing another 140+ targets while having a more significant role in scoring territory under a new coaching staff would be the clearest path for Mooney to vault into the top 20 at wide receiver after last season’s WR26 finish.

WR Velus Jones Jr.: The Bears didn’t draft a 25-year-old rookie to not give him a quality role in his first season, and it’s a surprise to see how low he’s ranked in redraft leagues (WR119 consensus). Maybe he’ll be a better real-life option with the ability to also contribute as a returner, but Jones Jr. should see enough offensive touches to be on the radar as a possible FLEX in deeper leagues. The No. 2 receiver job is wide open for Chicago.

WR Byron Pringle: Pringle averaged an impressive 9.7 yards per target across his first four seasons with the Chiefs, and he’s coming off a career-best campaign with a chance to start behind Darnell Mooney on a wide-open depth chart. It’s beneficial to have a connection with general Ryan Poles from their time together in Kansas City, and Pringle has underrated size (six-foot-one) and speed (4.46).

WR Equanimeous St. Brown: It feels like St. Brown just entered the league, but he was a rookie way back in 2018 when he caught 21 passes for 328 yards (15.6 yards per reception; 9.1 yards per target). Since then, he’s been limited to 16 total receptions for Green Bay, and we’ll see if the size advantage he has compared to the rest of the group leads to the six-foot-five target earning a quality role on the perimeter.

WR Dazz Newsome: A sixth-round pick in the 2021 NFL Draft, Newsome will get a chance to prove himself under a new coaching staff after catching two passes as a rookie. The former North Carolina standout can be a good stylistic complement to the field-stretching Darnell Mooney (similar to his role across from Dyami Brown for the Tar Heels), so he’ll be a name to monitor this summer if no one establishes themselves as the No. 2.

WR Isaiah Coulter: Coulter has been unable to solidify a role in Houston and Chicago over the past two years, but again, the wide-open depth chart could present an opportunity in training camp. The 23-year-old was notably a guy that needed some development time coming out of Rhode Island, and dynasty owners should keep him on their watchlist.

TE Cole Kmet: Aside from Darnell Mooney, the Bears mostly have role-player types in terms of outside weaponry, so Kmet should be a trusted target for Justin Fields, including a hopeful increase in red-zone opportunities—an area where former head coach Matt Nagy failed to properly utilize talent on the roster (such as Allen Robinson). Kmet will be a full-time player and has the size and athleticism to emerge as one of the NFL’s top tight ends if properly utilized in his third season.

TEs James O’Shaughnessy and Ryan Griffin: O’Shaughnessy and Griffin have both had some success as pass-catchers in their respective careers, and they should fill out the depth chart behind Kmet in their first season with the Bears. Standalone fantasy success is unlikely, but the lack of star power for the offense as a whole could put them on the redraft radar if Kmet were to ever miss time.

A lack of touchdowns resulted in Kmet being a disappointment as a breakout candidate in 2021, but he did catch 60 passes, and Chicago should be counting on him to be a significant part of the passing attack this season. While the expected return of Rob Gronkowski would make the position even more crowded, Kmet should be at least a low-end TE1 with the scoring upside to finish as a top-five or -six option.

Kmet was here last year, too, and the lack of touchdowns last year shouldn’t deter you from investing; if anything, now is a buying opportunity for the former second-round pick. In addition to the talent, Kmet is very durable with 33 games played through his first two seasons, and he just turned 23 in March. It wouldn’t be a surprise if he was viewed as an elite option by the end of the year.