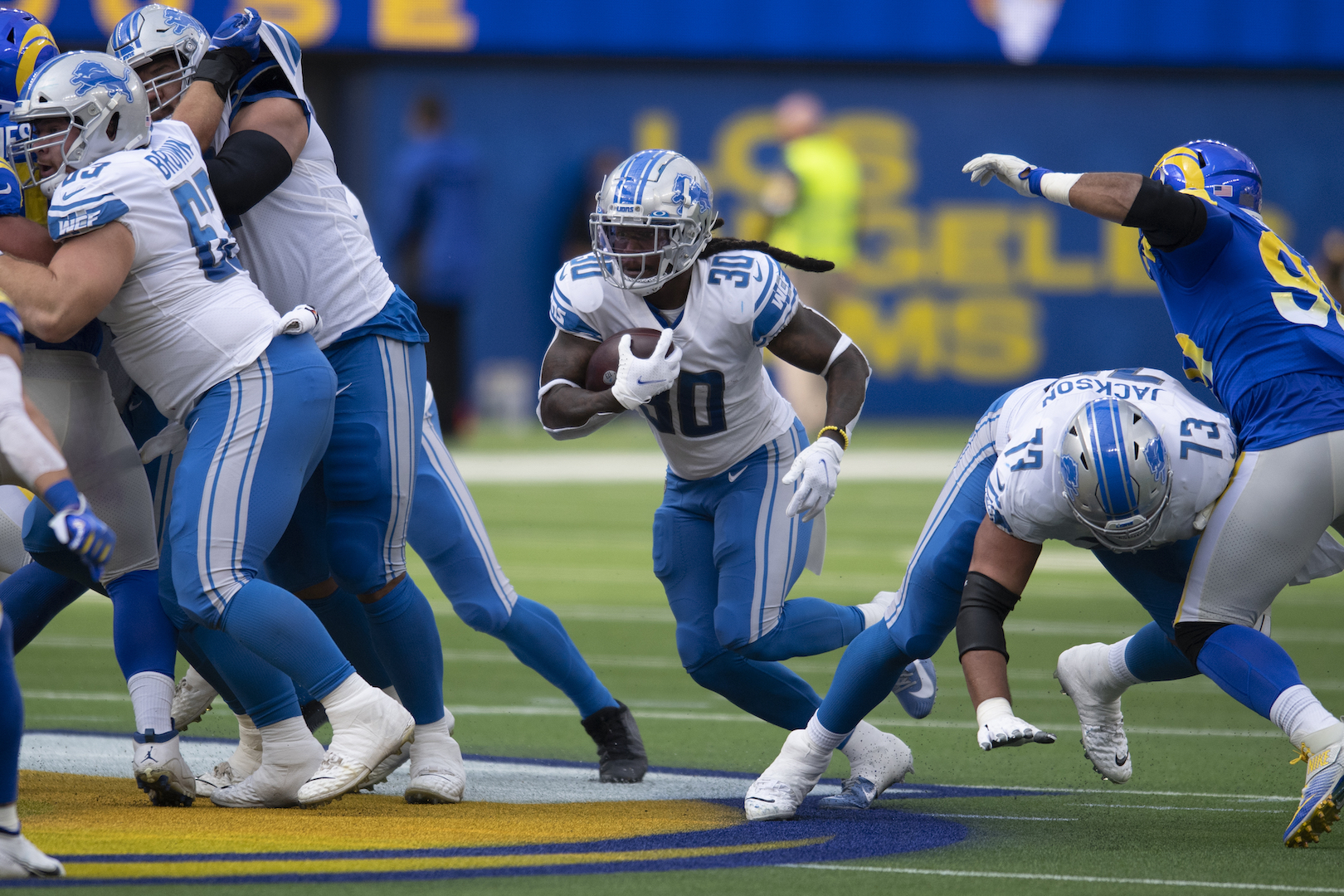 QB Jared Goff: We are high on Goff as a player, but even those who don’t think he’s an above-average quarterback have to see the pieces are in place to put up numbers with No. 12 overall pick Jameson Williams and former second-rounder D.J. Chark providing rocket boosters for a passing attack that already had emerging options in D’Andre Swift, Amon-Ra St. Brown, and T.J. Hockenson. Additionally, the offensive line for Detroit is a clear strength, and Goff was 3-2 with an 11:2 touchdown-interception ratio in five games with head coach Dan Campbell taking over as the play-caller down the stretch last year. Goff is almost a lock to finish in the top 20 if he stays healthy as an underrated QB2 candidate.

RB D’Andre Swift: Field-stretchers added by the Lions this offseason should help Swift have better opportunities to feast on soft coverage underneath, and the Lions showed they want to play through the former second-round pick with a season-long pace of 102 targets last season. Jamaal Williams will remain involved, but Swift should handle 250+ touches and has the talent level to reach the upper echelon of NFL running backs. The involvement as a receiver will make up for a couple of difficult matchups out of the gate (v PHI, v WAS).

RB Jamaal Williams: Detroit has more weapons to spread the wealth in 2022, but Williams should still be slotted for a quality workload, and the efficiency should be improved with Jameson Williams and D.J. Chark on the perimeter. It’s notable that Dan Campbell taking over as play-caller resulted in 13.7 carries per game for the 27-year-old, and he brings toughness between the tackles along with versatility backing up D’Andre Swift. He’s an overlooked FLEX option with handcuff appeal.

RB Craig Reynolds: A two-game stretch for Reynolds with 37 carries for 195 yards (5.3 YPC) allowed him to stamp himself on the fantasy radar last December—but he then handled 4.0 touches per game over the final two weeks when D’Andre Swift returned. While Reynolds has a fan in position coach Duce Staley, he’ll be clearly behind Swift and Williams, so it’d likely take an injury to emerge again.

RB Jermar Jefferson: Playing time for Jefferson was sporadic last year, and he finished the season clearly behind Craig Reynolds when touches were up for grabs. However, he did produce with the opportunities he saw (15 carries for 74 yards and two touchdowns), and Jefferson remains a dynasty stash with the hopes that he’d become the big complement to D’Andre Swift in 2023.

WR Amon-Ra St. Brown: St. Brown was putting up consistent WR1 numbers down the stretch as a rookie—seeing double-digit targets in each of his final six games with the “worst” performance being eight receptions for 73 yards (he had 86+ yards and scored in the other five outings). There have been times in recent memory when a hot finish doesn’t carry over to the following season (Dante Pettis immediately comes to mind), but we believe St. Brown is for real, and the souped-up Detroit offense will prevent opponents from keying on him. He’s a low-end WR2/FLEX option.

WR Jameson Williams: Our top wide receiver in the 2022 NFL Draft, Williams possesses game-breaking speed and explosiveness with smoothness as a pass-catcher to match it. He’s coming off a torn ACL suffered in early January, but Williams will definitely have a chip on his shoulder based on his reaction to being the fourth wideout selected in the draft. Perhaps he’ll be a better real-life option to begin his career, but Williams has the makings of a league-winner if he can round into form by December with a stretch of great on-paper matchups (v JAX, v MIN, @ NYJ, @ CAR, v CHI).

WR D.J. Chark: Chark was signed to a one-year, $10-million deal coming off a serious knee injury—which is a short-term investment that shows the kind of talent he has in a six-foot-four frame. Jared Goff is more than capable of challenging opponents on vertical throws with the personnel to now do it, and Chark should see plenty of one-on-one coverage with or without Jameson Williams in the lineup as defenses key on D’Andre Swift, Amon-Ra St. Brown, and T.J. Hockenson. Consider him as a cheap late-round flier with upside.

WR Josh Reynolds: Acquired in a midseason trade last November, Reynolds was a significant boost for the Lions as someone that had chemistry with Jared Goff—so it’s no surprise the unit started playing better when he joined them. Reynolds had a four-game stretch of 3/70/1, 4/69, 3/52, and 6/68/1 from Thanksgiving through Christmas, and he can be a sneaky early-season play if Jameson Williams misses time.

WR Quintez Cephus: Cephus has gone from a clear starter to the No. 5 receiver with all the new faces in Detroit, but he played well before a broken collarbone ended his season in Week 5. Through two years, Cephus has averaged 9.7 yards per target and 15.8 yards per reception on 57 opportunities.

WR Khalif Raymond: Raymond is another wideout that flashed last year for the Lions—finishing with 48 receptions for 576 yards and four touchdowns across 16 games. Boosting the numbers with a two-touchdown game (Week 4), and a couple of 100-yard performances (Week 7 and Week 17).

TE T.J. Hockenson: Hockenson was a frustrating player to roster last year, but the good news is that he saw eight or more targets in eight-of-12 games, and excluding the weather-impacted tie versus Pittsburgh, he scored in both outings with Jared Goff at quarterback after Dan Campbell took over play-calling duties (before a hand injury ended his season). This year, Detroit’s infusion of speed should create more space for Hockenson to work underneath, and another full offseason to work with Goff can lead to improved production for the former No. 8 overall pick. His midrange TE1 standing gets boosted with Rob Gronkowski’s retirement.

TE Brock Wright: Solid production for Wright as a rookie (12 receptions on 17 targets for 117 yards and two touchdowns) should give him the edge for the No. 2 job, but everything points to the Lions before more wideout-centric in 2022. The 23-year-old could be pushed by a couple of athletic newcomers for snaps.

TEs James Mitchell and Devin Funchess: A torn ACL ended Mitchell’s career at Virginia Tech, but he still was selected in the fifth round of April’s draft—and could have been a potential third- or fourth-rounder if healthy. As for Funchess, he’s making the position switch to tight end, and the former Michigan standout (having just turned 28 in May) has definite production to support his chances with 21 touchdowns across his first four years in the NFL.

An overlooked positive for St. Brown is him playing a large majority of his snaps in the slot, which will help to avoid stingy cornerbacks that have increasingly lined up outside. The concern is T.J. Hockenson being out for much of his hot streak to close out 2022, but St. Brown caught 90 passes as a rookie and should at least be a high-floor FLEX option.

As stated, we believe in Goff as a starting NFL quarterback, and we mentioned in our draft guide that the new weapons in Detroit should almost be like turning down the difficulty in a video game for the former No. 1 overall pick (particularly compared to what he was working with in 2021). Jameson Williams was another option here (consensus WR34 in dynasty leagues), but Goff gets the nod based on how low most seem to be on him from both a real-life and fantasy perspective.

In the final six weeks of last season (including Week 18), Amon-Ra St. Brown was the overall WR2 with 20.9 fantasy points per game, which trailed only Cooper Kupp (22.6) among wide receivers.