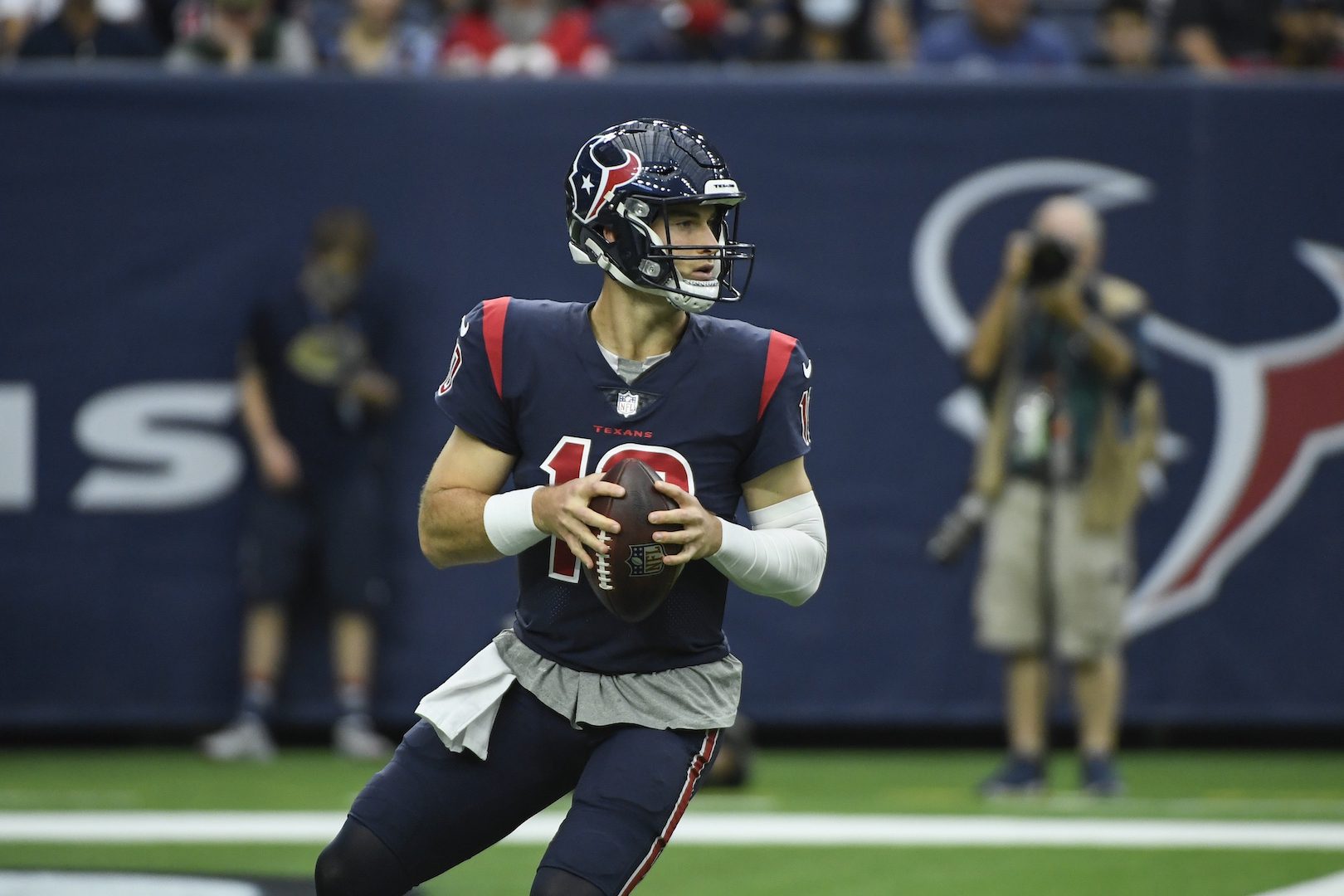 QB Davis Mills: There were understandably some growing pains, but Mills was very good overall in Year 1, and Houston is clearly committed to him as the starter based on everything they’ve said and done this offseason. Brandin Cooks staying with the team is great for Mills’ outlook, and leaps from fellow second-year players Nico Collins and Brevin Jordan would be huge for the offense taking a step forward. The higher ceilings for other quarterbacks—particularly on the ground—keeps Mills towards the bottom of the rankings, but you could make a strong case for him as a low-end QB2 in best ball leagues because of his floor.

RB Marlon Mack: Coming off a 30-touch season, Mack is still young having just turned 26 in the spring, and he had back-to-back campaigns with at least 1,000 total yards and eight touchdowns in 2018/2019 before being limited to seven games over the past two years. Behind an offensive line that adds No. 15 overall pick Kenyon Green to play next to left tackle Laremy Tunsil, Mack can certainly be a strong FLEX option—particularly early in the year—if given enough work.

RB Dameon Pierce: Pierce showing zero hesitation to finish off a would-be touchdown run by plunging into two defenders after having his helmet taken off last year at Florida perfectly encapsulates his game, and it’s exactly the kind of toughness Houston wants as they rebuild. We expect Mack to be the starter with Rex Burkhead also remaining involved, but Pierce will ideally earn more and more work as the season progresses to be the potential lead runner by the fantasy playoffs.

RB Rex Burkhead: Burkhead settled in as a volume-based FLEX to close out 2021—with the biggest game coming the day after Christmas when he rushed 22 times for 149 yards and two touchdowns in an upset win over the Chargers. Excluding that performance, though, Burkhead averaged just 35.6 rushing yards per game on 13.3 carries per game over the final seven weeks. His outlook as an end-of-bench option will be dependent on how the backfield shakes out in preseason action.

WR Brandin Cooks: It sounds like the days of Cooks being undervalued by everyone are over, as he had a new career-high in receptions (90) last season, and it’s clear he will continue to produce no matter the city or quarterback situation. Chemistry built with Davis Mills should only help Cooks in 2022, and that will be key to produce during a tough stretch to open the regular season (v IND, @ DEN, @ CHI, v LAC). There should also be some peace of mind for Cooks after signing a two-year extension that can keep him in Houston through the 2024 season, and we’d consider him a low-end WR2/FLEX with a good floor/ceiling combination.

WR Nico Collins: There are spots up for grabs behind Cooks on the depth chart at wide receiver, and Collins—the No. 89 overall pick in the 2021 NFL Draft—appears to be the best stylistic complement at six-foot-four with above-the-rim ability. New offensive coordinator Pep Hamilton having been with Houston as the passing game coordinator last season can help Davis Mills and Collins to build on their start together heading into Year 2, and the Texans should want their younger options to see significant snaps.

WR John Metchie III: Recovering from a torn ACL suffered in early December, Metchie is in a spot similar to former college teammate Jameson Williams where his stock should climb (or drop) based on his timetable for a return. It wouldn’t be a surprise if Metchie started slow when he’s eventually back on the field—but the end-of-season slate sets up favorably for a strong finish (December schedule: v CLE, @ DAL, v KC, @ TEN).

WR Chris Conley: Conley only saw 37 targets last year despite starting ten-of-16 appearances, but the efficiency was impressive with 14.7 yards per reception and 8.7 yards per target. Still, the volume simply isn’t there for him to be much more than a Hail Mary DFS option that will hopefully hit on a big play and/or score.

WR Phillip Dorsett: Dorsett’s redraft outlook is similar to Conley’s, and he showed well last year in three games as a Texan (his third team of 2021)—including yardage totals of 43 and 55 in a couple of late-season wins. The speedster could be insurance for Brandin Cooks and would see a boost in fantasy value if the team’s top wideout ever misses time.

WR Chris Moore: The production of Moore last season on limited opportunities—21 receptions on 22 targets for 227 yards and two touchdowns—at least makes him a name to monitor. On the downside, Moore appeared in 12 games, and a good chunk of the numbers were compiled in a Week 5 loss to the Patriots with a 5/109/1 line. We’ll see if he generates buzz in camp.

TE Brevin Jordan: Investing in Jordan takes some projecting after he played just nine games as a rookie, but we were high on him coming out of Miami, and the flashes were there for him in 2021—including by catching four-of-four targets in the red zone (three of them being touchdowns). Houston using him more in the slot or even as an H-back would be optimal for Jordan to get the ball in his hands and highlight the versatility. It’d be a surprise if he wasn’t the clear No. 1 on the depth chart.

TEs Pharaoh Brown and Teagan Quitoriano: The veteran Brown and rookie Quitoriano project as the blocking tight ends for Houston, but their fantasy appeal will be limited in what doesn’t project to be a high-scoring offense. For the future, general manager Nick Caserio likely hopes for Jordan and Quitoriano to be a long-term pairing as a couple of fifth-rounders from his first two drafts.

Pierce might not get a ton of work to begin the season, but he profiles as an obvious candidate to be unleashed more and more as the year progresses. By the fantasy playoffs, the rookie can be a low-end RB2/FLEX behind an offensive line that should open plenty of holes on the left side behind Laremy Tunsil and Kenyon Green.

The problem with the Texans right now is that they don’t have an option that you can have a ton of confidence about developing into a future superstar. However, Metchie was drafted with the No. 44 overall pick despite his torn ACL, and it wouldn’t be a surprise to see him come alive late in the season like Amon-Ra St. Brown did with the Lions in 2021; being a PPR machine at the next level is very possible.

In six seasons with at least 15 games played throughout his career, Brandin Cooks has never had fewer than 65 receptions, 1,037 receiving yards, or five receiving touchdowns.