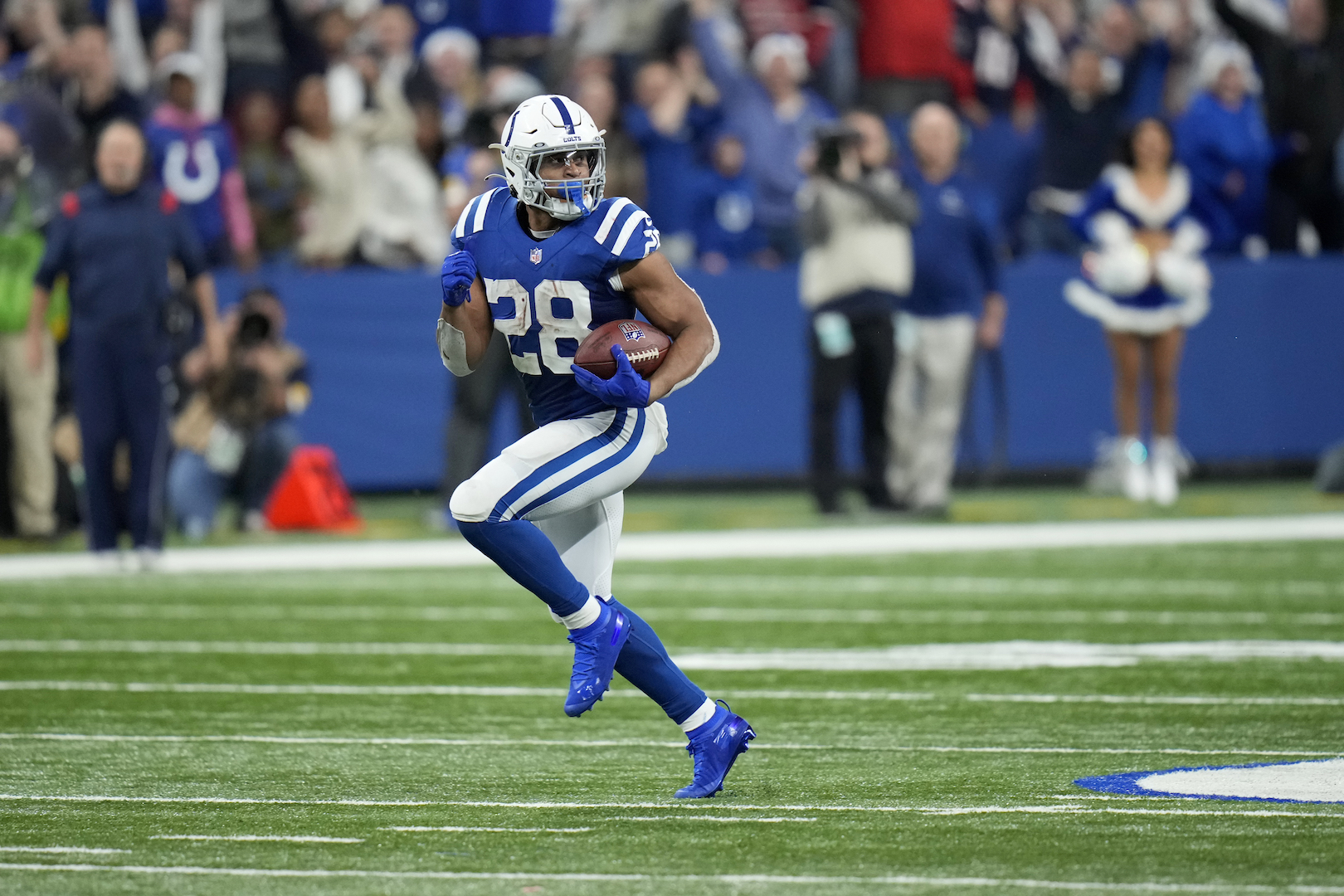 QB Matt Ryan: Playing for the run-dominant Indy offense, Ryan is in an excellent position to succeed as a quarterback that has thrived off play-action passes throughout his career. With Jonathan Taylor forcing safeties into the box, Matty Ice should hit on plenty of chunk gains to Michael Pittman Jr., Parris Campbell, and rookie Alec Pierce—with room for another addition at wide receiver. While there might not be top-five, league-winning upside for fantasy owners, Ryan should be a very stable option with plenty of high-level football left in the tank. The former NFL MVP will open with road matchups against the Texans and Jaguars before ending September with a potential high-scoring affair versus Kansas City in his home debut.

RB Jonathan Taylor: It’s unbelievable to think about now, but last summer, there were many in the industry saying Taylor could be a disappointment in 2021. We recommended him as a top-five pick, though, comparing his talent level to Derrick Henry and Nick Chubb while saying he “has overall RB1 ability as a versatile power back with elite speed and traits.” All Taylor did was total 2,171 yards and 20 touchdowns, and the hope is that Matt Ryan adding stability at quarterback will lead to more underneath targets for one of the game’s best players. Behind a road-grading offensive line, Taylor is the recommended top pick in all formats.

RB Nyheim Hines: Following a season in which Carson Wentz often decided against throwing to open checkdowns, Hines will be boosted by the swap out for Matt Ryan, so his outlook is undoubtedly more favorable than it was last summer. There might be limited season-long upside behind Jonathan Taylor (i.e. he has a low chance of finishing as a top-24 running back), but Hines can be a weekly FLEX option as a substantial piece of the passing game, and he gets a boost in full PPR formats.

RBs Phillip Lindsay and Ty’Son Williams: The Colts were able to add a couple of talented runners in Lindsay and Williams this offseason, but it’s highly improbable that standalone value is carried for them with Jonathan Taylor set to be the workhorse for a contending roster. Still, the battle for the No. 3 job is one to watch with a path to touches if Taylor ever goes down—especially behind Indy’s offensive line.

WR Michael Pittman Jr.: Coming off a breakout season in 2021, Pittman Jr. is now set to catch passes from Matt Ryan as the clear No. 1 wideout for Frank Reich’s offense. Jonathan Taylor will of course continue to create favorable looks for the wideouts, and Pittman Jr. should also benefit from what is perhaps the easiest schedule in the league in terms of avoiding shutdown cornerbacks, as the Colts won’t face any of the top guys in our opinion with no games against the Bills (Tre’Davious White), Packers (Jaire Alexander), Rams (Jalen Ramsey), or Dolphins (Xavien Howard). A boost in touchdowns (seven through 30 games) could get Pittman Jr. into the WR1 ranks if things break right.

WR Parris Campbell: Campbell has simply been unable to stay healthy with 15-of-49 games played since entering the league, which isn’t a good sign for a player reliant on explosiveness. Still, the Indy offense needs playmakers to step up (especially if T.Y. Hilton isn’t re-signed), so maybe the run-after-catch ability we saw out of Campbell at Ohio State can be unlocked with Matt Ryan delivering accurate throws underneath. For what it’s worth, the two best fantasy performances of Campbell’s career have come versus the first two opponents on the schedule (@ HOU, @ JAX).

WR Alec Pierce: Pierce was a very polarizing prospect, but there is no denying that he landed in an excellent spot, as the Colts will highlight his skillset with plenty of vertical routes that his veteran quarterback has made a living on such as deep digs and posts. At the same time, comparisons to Jordy Nelson seem too lofty, and Pierce will need to prove he can consistently get off press coverage and create separation versus stronger, more athletic NFL cornerbacks after those were clear weaknesses for him at Cincinnati. However, the rookie may still be undervalued in redraft leagues with a WR99 consensus ranking.

WR Ashton Dulin: He wasn’t really featured as a person/player for the in-season version of Hard Knocks last year, but you can tell Dulin is somewhat of a Frank Reich favorite that should be able to earn the No. 4 role again in 2022. The aforementioned effectiveness of Matt Ryan on play-action passes can lead to him being a very cheap DFS flier in the right spot.

WRs Mike Strachan and Dezmon Patmon: Strachan (two receptions for 26 yards) and Patmon (two receptions for 21 yards and a touchdown) worked as depth last year for the Colts, and they’re both bigger targets that will need to beat out second-rounder Alec Pierce to earn a more substantial role in 2022. We’d at least monitor them in dynasty leagues.

TE Mo Alie-Cox: The retirement of Jack Doyle—who started 14 games last year—opens the door for others to fill the void, including Alie-Cox after he led the Colts in yards (316) and touchdowns (four) at the position in 2021. Second-year option Kylen Granson was a clear draft target for Frank Reich two years ago and could cut into the upside, but Alie-Cox can capitalize in scoring territory and on big plays (13.4 yards per reception for his career).

TE Kylen Granson: Drafted in the fourth round of the 2021 NFL Draft, Granson caught 11 passes for 106 yards last year and will hope to carve out a bigger role with Doyle gone. While the work at OTAs was apparently not overly encouraging, there is plenty of time for Granson to make an impact and become a reliable on-the-ground target for a new quarterback.

TE Jelani Woods: A six-foot-seven target with 4.61 speed and high character, Woods should be primed for success at the next level as he continues to develop his game. The rookie might be blocked by Mo Alie-Cox this year, but he’s a strong dynasty investment at tight end for those with patience.

Frank Reich said, “if I was a fantasy owner, I’d consider drafting Nyheim” about his dynamic back in late May, and that alone caused his stock to climb. Still, we’d say the RB44 ranking could be a handful of spots too low, and Hines should have standalone value if he can reach 60+ receptions like he did in 2018 and 2020.

This might not be the most exciting choice because you’ll likely need the first-overall pick to take him, but Taylor just turned 23 in January and should have several years of elite production left. If you play in a league where high-end RB1 options seem to be undervalued (because of concerns about shelf life), we’d recommend at least looking into what it’d take to acquire Taylor and have him anchor your roster for at least the next five years.