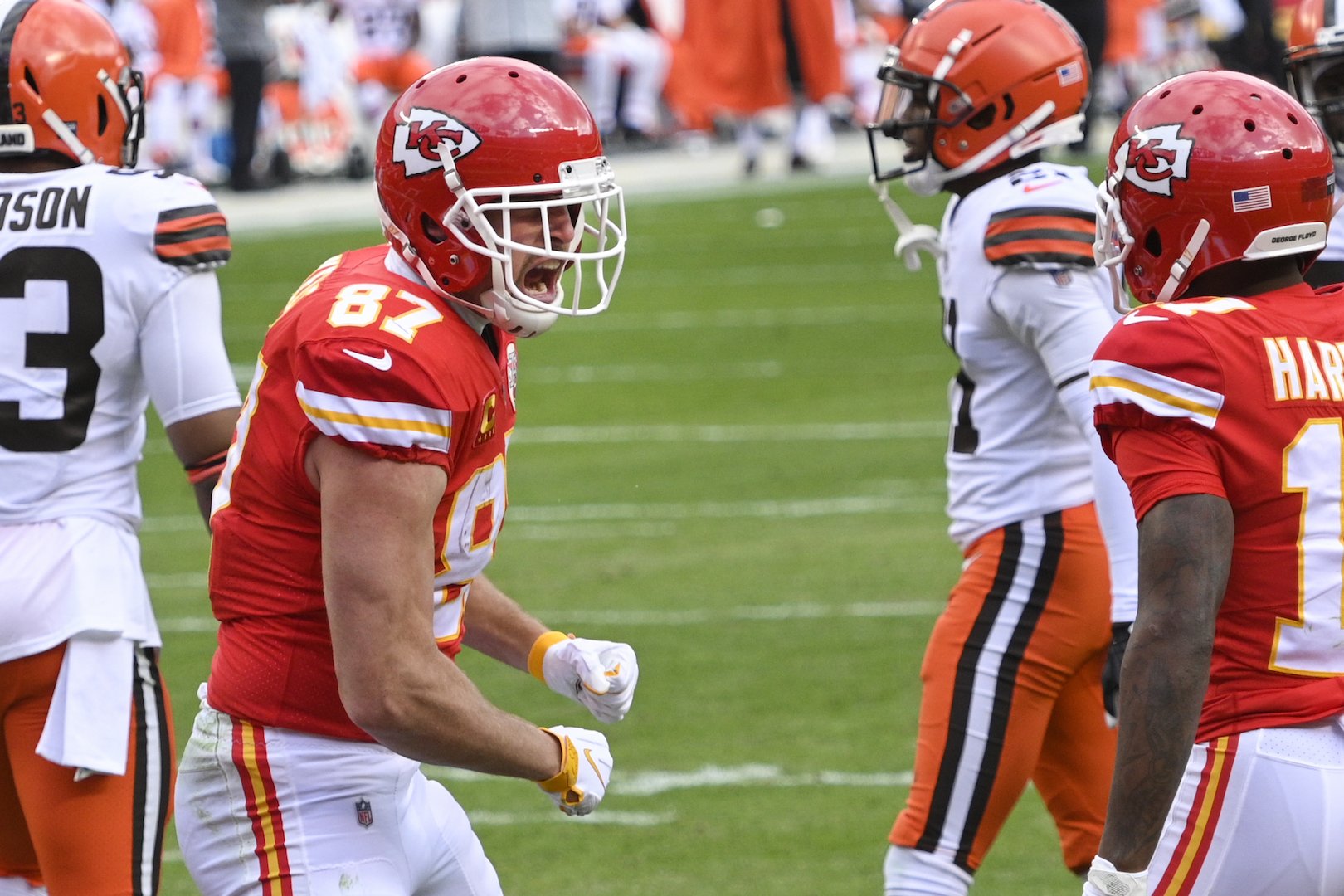 QB Patrick Mahomes: He was ranked as the consensus QB1 in 2019 and 2020, but Mahomes has finished as the overall QB4 in both years, and he’ll now be playing without Tyreek Hill on the roster for the first time in his career—so there is some unknown here. That being said, the upside remains extremely high from both a weekly and season-long perspective, and Kansas City added a handful of weapons with JuJu Smith-Schuster, Marquez Valdes-Scantling, and second-round rookie Skyy Moore among the new faces at wide receiver. Andy Reid masterminding the attack and Travis Kelce still playing at an elite level are reasons to believe Mahomes will be just fine without Hill.

RB Clyde Edwards-Helaire: Edwards-Helaire hasn’t lived up to expectations as a first-round pick in 2020, and the main disappointment is arguably a lack of receiving production for a guy that caught 55 passes in his final season at LSU. Still, he just turned 23 in April, and the Chiefs should have more balance—rather than mostly playing through Tyreek Hill and Travis Kelce—in 2022, which could allow Edwards-Helaire to have his potential unlocked in a high-powered offense. The offensive line staying together is another plus, but CEH will have to hold off Ronald Jones II for touches, especially with Kansas City showing they will ride the hot hand at running back.

RB Ronald Jones II: Jones has said everyone is ready to “eat” after signing with the Chiefs, and as stated, a hot-hand approach at running will give him an excellent opportunity to fill his plate in one of the NFL’s most explosive offenses. Andy Reid highlighting the ability of Jones as a runner—mentioning his size, speed, vision, and toughness—is notable, and there is a definite chance he emerges as the lead early-down option with Edwards-Helaire being in more of the third-down role.

RB Jerick McKinnon: The signing of McKinnon earlier this month further crowds the backfield for the Chiefs, and the veteran proved himself when called upon in 2021 with 12 carries for 62 yards (5.2 YPC) in addition to 13 receptions for 107 yards and a score. McKinnon could end up being a thorn in the side of Edwards-Helaire and Jones more than he is a standalone option, but he should certainly be monitored as a potential late-round target.

RB Derrick Gore: Gore was also very impressive last season—rushing 51 times for 256 yards (5.0 YPC) and two touchdowns as a change-of-pace option. He also caught eight-of-nine targets for 105 yards, and notably passed the eye test by flashing whenever on the field. He’ll actually be turning 28 in December despite making his NFL debut last season, but Gore is a name to watch—whether it’s with Kansas City or something else.

WR JuJu Smith-Schuster: In previous years, the Chiefs had a very simple passing attack to project for with Tyreek Hill being a high-upside WR1, Travis Kelce being a high-end TE1, and others like Mecole Hardman being optimistic fliers. Now, the wideouts are a mystery, and opinions seem to vary significantly about how to rank them. We believe Smith-Schuster will be an extra security blanket alongside Kelce, so he has the highest floor of the group with seasons of 111 and 97 receptions under his belt from his time in Pittsburgh. Plus, he’s still a young player that won’t turn 26 until late November.

WR Marquez Valdes-Scantling: Talent and situation matter the most, but Valdes-Scantling—who doesn’t lack for talent as a six-foot-four field-stretcher with 4.37 speed—getting a three-year, $30-million contract from the Chiefs (compared to a one-year, incentive-heavy deal for JuJu Smith-Schuster) is notable, too. Even if he never became a star in Green Bay, Valdes-Scantling averaged 20.9 yards per reception and 11.0 yards per target with a 33/690/6 line a couple of years ago, and catching passes from Patrick Mahomes could give MVS more downfield opportunities compared to the structured attack for the Packers.

WR Mecole Hardman: Hardman hasn’t developed into another Tyreek Hill for the Chiefs, but the expectations were probably unfair coming out of Georgia, and there are positives to highlight as hope for a 2022 breakout. For one, Kansas City no longer having Hill creates a huge opportunity for him to step up, and general manager Brett Veach expects him to have a big season. Also, Hardman has seen his targets (41 > 62 > 83) and receptions (26 > 41 > 59) steadily rise in all three seasons, and he just turned 24 in March. We still believe in the upside.

WR Skyy Moore: It’s possible Moore becomes a quick favorite of Patrick Mahomes and puts up big numbers as a rookie, but there is also a case to be made for him as the most overvalued fantasy option of the year. We pegged the second-rounder as someone needing further development as a route runner coming out of Western Michigan, and the Chiefs would seem to be set with JuJu Smith-Schuster, Marquez Valdes-Scantling, and Mecole Hardman as their starting trio. Moore is probably a better dynasty investment than redraft selection.

WR Justyn Ross: Ross said he chose to sign with the Chiefs as an undrafted free agent because “they gave [him] a chance when a lot of people didn’t,” and it surely didn’t hurt that they have one of the league’s most explosive offenses. For anyone that doesn’t know, Ross went undrafted because of durability concerns (most notably a neck injury), but he was a legitimate first-round talent at six-foot-four with plus athleticism and versatility. It wouldn’t be a surprise if he quickly works his way into meaningful snaps.

WR Josh Gordon: Gordon saw a decent amount of playing time after signing with the Chiefs last year (219 snaps in 12 games), but he was only targeted 14 times—resulting in five receptions for 32 yards and a score. Although the former All-Pro is entering his age-31 campaign and appears to be on the roster bubble, he’d be firmly on the fantasy radar if able to edge out some younger options, and the connection with Mahomes should be stronger in 2022.

WR Cornell Powell: Stashed on the practice squad as a rookie, Powell—who didn’t breakout until he was a fifth-year senior at Clemson (due to the talent ahead of him)—shouldn’t be counted out from the competition at wide receiver. Fortunately, we usually get a great look at the Kansas City offense in preseason action to see how much run Powell and others get with the starters, but we like his skillset on the perimeter.

WR Corey Coleman: Coleman was a blast-from-the-past signing in free agency, but the Chiefs are wisely turning over every stone to replace Tyreek Hill—and it won’t hurt to see how the former Baylor standout can contribute as a field-stretcher. While the odds might be long for a speedster that will turn 28 next week, Coleman couldn’t ask for a better opportunity to get his career back on track.

WR Justin Watson: FOX’s Peter Schrager has called Watson “the one to watch” regarding the battle at wide receiver, and that alone is enough to put him on the radar to potentially play the “big slot” role. That said, we would give the edge to other options, and only so many players will make the roster for Kansas City.

TE Travis Kelce: Kelce was knocked off the overall TE1 pedestal in 2021, and many fantasy owners were frustrated with the production from week-to-week despite yet another 1,000-yard season. The three-time All-Pro caught fire to close out the campaign, though, scoring seven times over the final six games (including playoffs, where he went for lines of 5/108/1, 8/96/1, and 10/95/1). As the clear centerpiece of Andy Reid’s offense with Tyreek Hill gone, Kelce has a strong case to be ranked as the overall TE1 over Mark Andrews.

TE Noah Gray: Drafted in the fifth round of the 2021 NFL Draft, Gray caught seven passes for 36 yards and a touchdown as a rookie—but all the additions made at wide receiver would suggest it’s unlikely Reid suddenly leans on more TE-heavy personnel. Gray is probably best viewed as Kelce insurance in Year 2.

Mecole Hardman (WR64) and perhaps any of the non-starters at wide receiver could have been chosen, but Jones has RB2 upside if he earns significant early-down work—especially if he can run into some luck finding the end zone. Jones is still young (turning 25 in August) and might feel less pressure in a more freestyling offense than what he played in with the Buccaneers.

We are very high on new NFL teammate and former college teammate Justyn Ross, too, but Powell is basically off the radar for most and shouldn’t be written off after one year. A very smooth player with 4.51 speed and impressive strength for his size, Powell will hope to make enough plays to get a look with the starters at some point—and you never know what can happen catching passes from Mahomes.