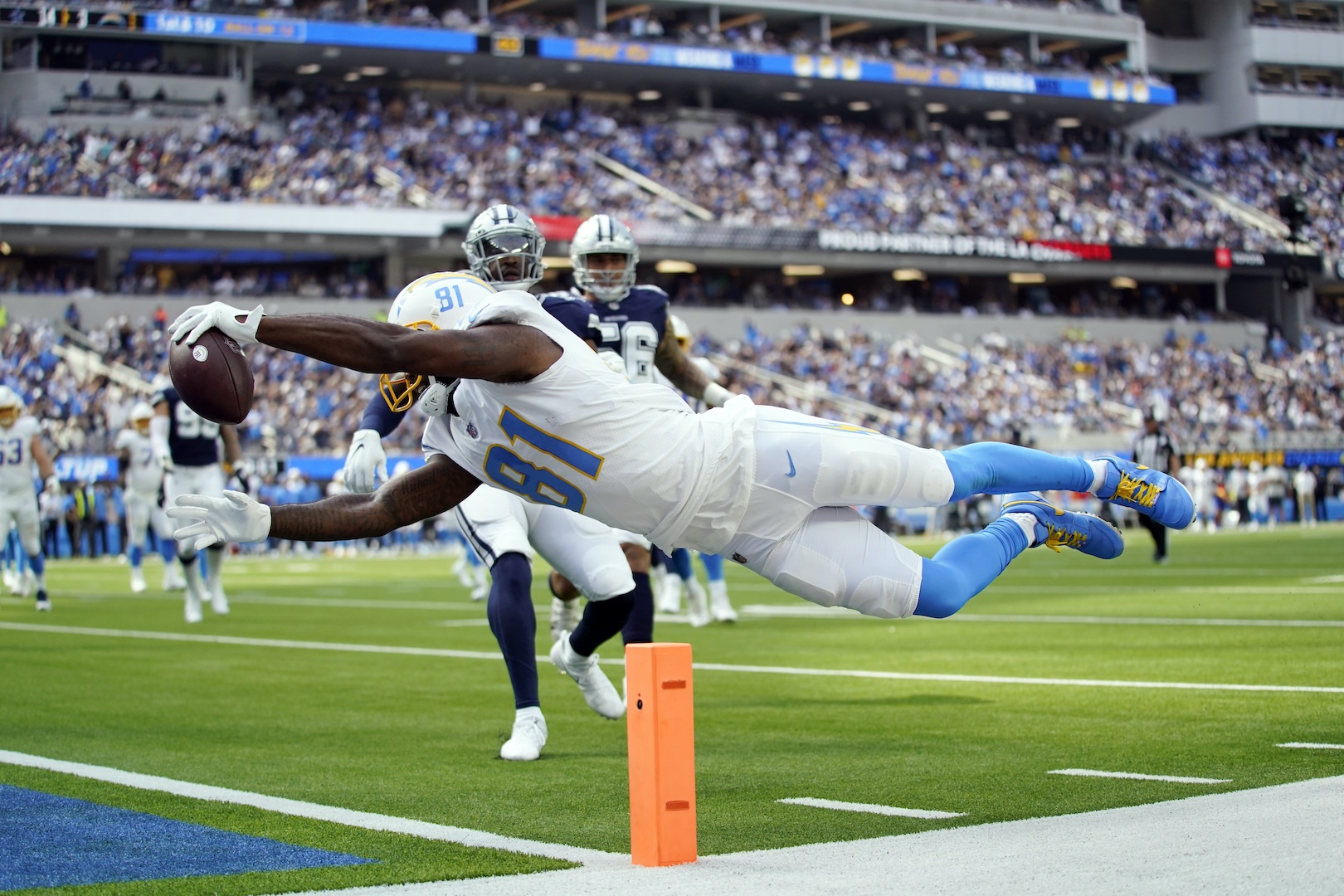 QB Justin Herbert: Herbert followed up a 31-touchdown campaign as a rookie with 38 passing touchdowns in 2021, and he’s in great position to be a high-end QB1 again this season. Aside from the Chargers re-signing Mike Williams to a three-year, $60-million deal—which will keep the aggressiveness high for the offense—the team also further bolstered the offensive line with first-round guard Zion Johnson. The superstar passer can also do serious damage with his legs (though it’s not been a huge statistical part of his game to date), but Herbert is a clear top-five option either way. He has the ceiling of being fantasy football’s top scorer.

RB Austin Ekeler: Ekeler should be boosted in full PPR leagues, and there is an argument to be made for him as a high-end RB1 after scoring 20 total touchdowns last season. That said, the touchdown total will likely drop, and talented rookie runner Isaiah Spiller should be able to solidify the change-of-pace role—which might lead to Los Angeles wanting to limit Ekeler’s workload on a week-to-week basis. We would rather go with Derrick Henry or Christian McCaffrey as a top-three pick in 0.5 PPR leagues.

RB Isaiah Spiller: The landing spot could have been better for Spiller to produce as a rookie, but we are still optimistic due to his talent, and Los Angeles drafted him to solidify the No. 2 job behind Ekeler. Not turning 21 until August, Spiller possesses a rare combination of vision, patience, and instincts as a runner, and it’s difficult to complain about being attached to Justin Herbert and an offense that will score points. There should be FLEX-worthy weeks in addition to high-end upside as a handcuff.

RBs Joshua Kelley and Larry Rountree III: A rotation between Kelley, Rountree, and free agent Justin Jackson led to none of them really finding sustained success last season—and now Los Angeles would seem to have a clear backup to Ekeler with Spiller. In a battle for the No. 3 job, we like Kelley as a better dynasty stash, and he’s someone that could potentially see increased value if acquired by another team this summer.

WR Mike Williams: Williams had an absolutely scorching start in 2022—going for lines of 8/82/1, 7/91/1, 7/122/2, and 8/165/2 across four of his first five games. Unfortunately, a knee injury derailed his season a bit, which resulted in most inconsistent usage and production for the big-bodied target. Fantasy owners should feel very optimistic about his outlook after getting locked up for the next three years, though, and we expect Williams will be a featured player if health cooperates. Plus, the shootouts should begin early with matchups versus the Raiders and Chiefs within the span of five days to begin the regular season.

WR Keenan Allen: Injuries hampered Allen to begin his career, but he must be a fan of playing in Los Angeles, as the 30-year-old has missed just two games since the Chargers’ relocation while compiling reception totals of 102, 97, 104, 100, and 106 in five seasons. Although we believe Mike Williams will be the No. 1 target for Justin Herbert and carries more overall upside, Allen has an extremely high floor with at least four receptions in all but two games started by Herbert—and he’s scored in each of the other two outings. There aren’t many safer picks in the third or fourth round of redraft leagues.

WR Joshua Palmer: Palmer was one of the offseason’s big winners with Los Angeles not drafting a wideout, and he became a larger part of the offense down the stretch last year by seeing at least five targets in four of the final five games (after zero such occurrences before Week 14). We called him a prototype perimeter target coming out of Tennessee, so Palmer being able to play the majority of his snaps in the slot as a rookie bodes well for him carving out a meaningful role behind Mike Williams and Keenan Allen in 2022.

WR Jalen Guyton: Guyton might be behind Palmer for the third receiver job, but he should make a strong case for snaps based on his play through two years with Herbert under center—going for a 59/959/6 line on 105 targets with 16.3 yards per reception and 9.3 yards per target. He’d likely be the biggest beneficiary of any potential injury to Mike Williams.

WR DeAndre Carter: The Chargers could be a strong candidate to add another wideout before Week 1, but Carter’s offensive role probably won’t be too significant either way as a guy that was brought in more for his ability as a returner. Last year in Washington, the veteran caught 24 passes for 296 yards and three touchdowns while also adding ten carries for 89 yards in the most extended action of his career.

TE Gerald Everett: Coming off a career-high in targets (63), receptions (48), receiving yards (478), and receiving touchdowns (four), Everett will try to best those numbers with the Chargers after just one season in Seattle. Donald Parham Jr. and Tre’ McKitty could make it somewhat of a committee at tight end, but Everett—signed to a two-year deal—is in an ideal spot between Mike Williams and Keenan Allen (after being between DK Metcalf and Tyler Lockett with the Seahawks). He’s a low-end TE2 with the position looking stronger, but there’s a good combination of floor and ceiling.

TE Donald Parham Jr.: Parham is thankfully healthy after last year’s scary head/neck injury, and he should have a similar role in 2022 as a touchdown threat at six-foot-eight. While the scores will likely be unpredictable, he can be a quality target in best ball drafts with the upside for at least a handful of touchdowns (he has six on 47 career targets).

TE Tre’ McKitty: McKitty has very limited production at Georgia and only caught six passes as a rookie, and we’d continue to view him as a dynasty prospect more than a redraft factor. The 2021 third-rounder is at least in a great spot considering the quarterback play and general firepower of the Chargers.

Before the aforementioned knee injury suffered against Baltimore in Week 6 last year, Williams was simply dominant while putting up high-end WR1 numbers. The ECR has jumped a few spots over the past month, but people still seem to want to ignore the injury as a factor, and staying healthy for the entire season should allow him to build on last season’s 76/1,146/9 line.

“Other Notes” is all about Williams, and his stock in dynasty leagues (WR31 on FantasyPros; WR33 on ESPN) is way too low. Again, the former Clemson star is going to be featured as a 20-million-dollar-per-year weapon, and the connection with Justin Herbert still has room to grow both downfield and in scoring territory. If Williams is valued outside the top 30 wideouts in your league, you should trade for him immediately.