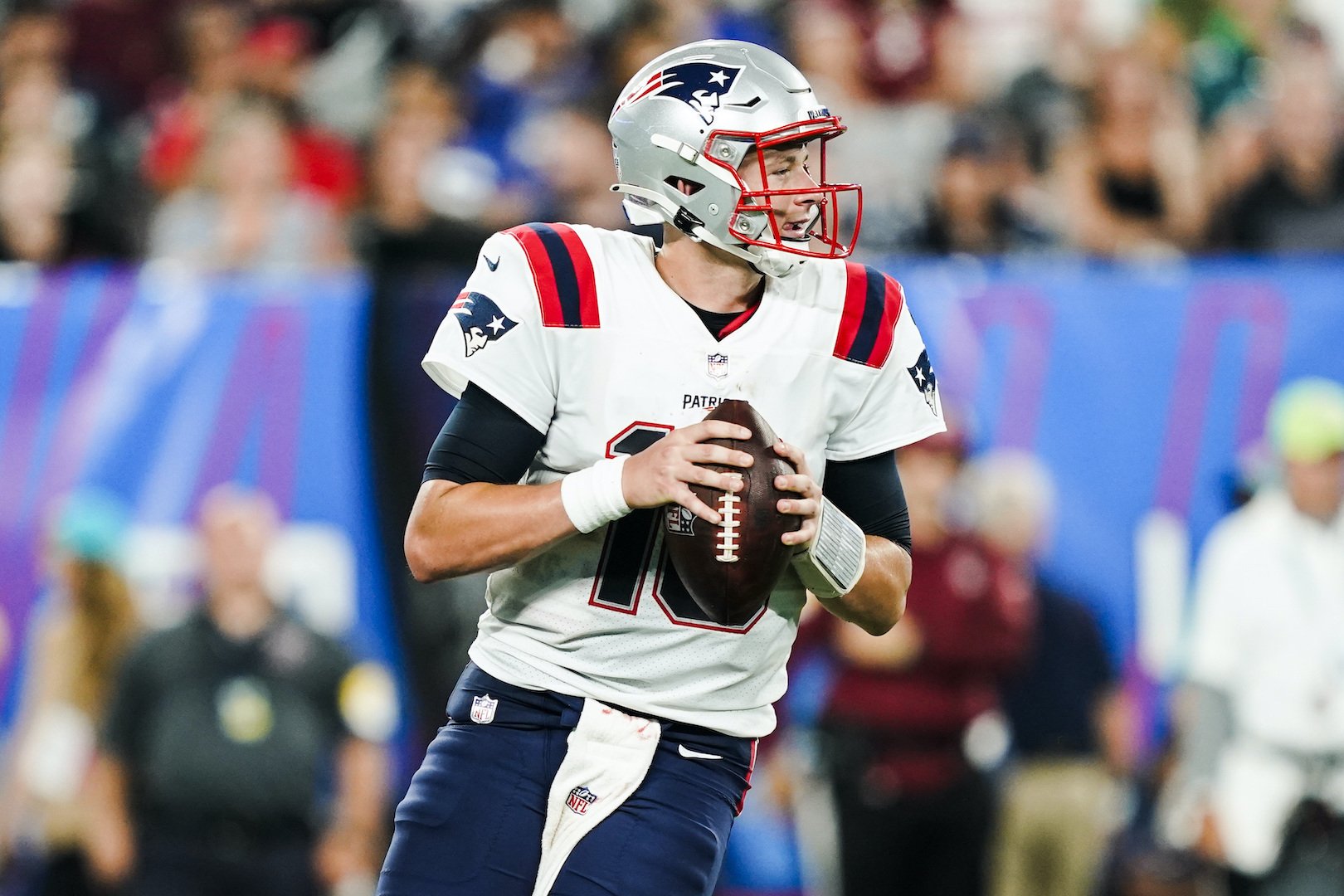 QB Mac Jones: Even though he was the fifth quarterback selected in the 2021 NFL Draft, we called Jones a “future star” with the Patriots, and he was sensational as a rookie to help get New England into the playoffs. This year, we’re anticipating an increase in numbers with the big-play ability of DeVante Parker—not to mention Nelson Agholor and Jonnu Smith expected to be featured more—complementing the steadiness of Kendrick Bourne, Jakobi Meyers, and Hunter Henry. The schedule is something to consider with four difficult games versus Buffalo and Miami on the docket, but Jones is a solid QB2 option.

RB Damien Harris: A season after tying for the second-most rushing touchdowns in the league, Harris will have some added competition in the backfield with New England surprisingly selecting Pierre Strong Jr. (fourth round) and Kevin Harris (sixth round) in the 2022 NFL Draft. Also, James White will be back in a receiving role coming off a serious hip injury, and Rhamondre Stevenson established himself as a very capable 1B option as a rookie. However, we think Harris—going as the RB26—is a great value, and he should be leaned on in the final year of his deal.

RB Rhamondre Stevenson: Stevenson flashed his ability at Oklahoma, but he transformed himself as a rookie in New England—getting more into shape while keeping his power and the light feet for a big back. The Pats will likely open up the offense more after adding DeVante Parker to last year’s returning group, but Stevenson should be a strong standalone FLEX option with RB1 potential if Harris ever goes down.

RB James White: The status of White coming off a serious hip injury remains a bit of a mystery a couple of weeks before camp, and re-signing in New England on a two-year deal might mean they want to take things slow with him in 2022. Still, Mac Jones formed a quick connection with the former Super Bowl hero last season in two healthy appearances (12 receptions for 94 yards on 13 targets), and history suggests the Patriots can keep more than two backs fantasy relevant. As usual, you can boost him in PPR leagues.

RB Pierre Strong Jr.: A home-run threat with 4.37 speed and good size (five-foot-11, 207 lbs.), Strong Jr. should immediately be on the redraft radar with a skillset to make an impact on limited touches. Of course, there is a chance 2022 is essentially a “redshirt” season like Damien Harris had in 2019, so we’ll have to see how much run he gets with the starters next month.

RB Kevin Harris: Harris was the second back selected by New England in April’s draft, and it’s easy to see them using him as a big-bodied insurance policy for Rhamondre Stevenson this season and into the future. A physical, muscular runner at 220 pounds, Harris scored 15 rushing touchdowns for South Carolina in 2020.

WR DeVante Parker: Acquired in a trade with the Dolphins in early April, the Patriots are counting on Parker to be their top perimeter weapon this season. There is always a concern about the immediate success of players in the complex New England system, but Parker’s physical play style helps alleviates those concerns, and the Pats appear to be simplifying the overall operation some in 2022. Furthermore, Mac Jones being a pinpoint passer that was comfortable throwing to Hunter Henry bodes well for Parker’s outlook running routes such as digs, outs, and comebacks.

WR Kendrick Bourne: The addition of Parker combined with everyone returning for the Patriots will likely lead to fewer opportunities for Bourne—but the former undrafted free agent seemed to become a favorite of both Mac Jones and the coaching staff in his first season with New England. Even if a top-24 finish might be just out of reach, Bourne can again finish as a steady WR3 after being the overall WR30 on just 70 targets in 2021. Last year, he ranked fifth in the NFL in quarterback rating when targeted (132.1).

WR Nelson Agholor: This offseason, Agholor has discussed how he expects to play faster in Year 2 with the Patriots—accurately explaining that New England has a complex route tree that can take some time to master. DeVante Parker having the ability to stretch the field could open more underneath opportunities for Agholor (remember, he caught nine passes for 84 yards against the Pats in Super Bowl LII), and team owner Robert Kraft even mentioned the wideout by name in the spring by saying the offense is “making changes to take advantage of what [he does] best.” We would recommend him as a quality final-round target that is almost always on the board in Best Ball Mania III.

WR Jakobi Meyers: The order of players for the team preview articles isn’t necessarily how we have them ranked, but Meyers—viewed by many as the top option for New England—might be overvalued for an offense that we believe will want to create more big plays. It’d be a surprise if Meyers came particularly close to reaching the 126 targets he saw last season (when he averaged just 6.9 yards per target).

WR Tyquan Thornton: It’s difficult to see a clear path for Thornton to have a major role in Year 1, but the Patriots spent the No. 50 overall pick on him in the 2022 NFL Draft, and his pure speed (4.28) could lead to splash plays if he earns snaps. It seems more likely he’s a special teams contributor while developing as a wide receiver on a crowded depth chart.

WR N’Keal Harry: Harry has totaled 57 receptions for 598 yards and four touchdowns through three seasons, and the former first-round pick is squarely on the roster bubble for New England. A change of scenery is likely his best hope for a sudden breakout, and Harry is someone that can be used more on designed touches in the right offense.

WR Ty Montgomery: No one is sure whether Montgomery should be listed as a wide receiver or running back (including himself), but we’ve always liked Montgomery’s talent—and he’s at least worth monitoring as a potential weapon out of the backfield if James White is eased back in. The offense as a whole should have much more clarity once the 53-man roster is set.

WR Lil’Jordan Humphrey: Although he never had an expanded role, Humphrey made the most of his opportunities in three seasons with New Orleans—catching 16 passes for 295 yards (18.4 average) and three touchdowns while averaging 12.3 yards per target. If he’s able to make the team, Lil’Jordan might have impressed enough in the summer to earn a quality number of snaps.

TE Hunter Henry: Dating back to his rookie season, Henry has gone for touchdown totals of eight, four, five, four, and nine to establish himself as a very steady option in scoring territory while catching passes from Philip Rivers, Justin Herbert, and now Mac Jones. The Patriots are hoping for more out of Jonnu Smith in 2022, but Henry will be the trusted target of Jones in the red zone once again, and not always being on the field (68% snaps played) in his first year with the Pats helped Henry finally suit up for a full season. He’s a high-to-mid TE2.

TE Jonnu Smith: Smith said it was important to participate in OTAs to build chemistry after declining to do so last year (admitting his 2021 offseason was “choppy”), and the Philadelphia native sounds focused on re-establishing himself as a big-play weapon. Robert Kraft highlighting Smith as someone they’ll have a better idea of how to use in Year 2 should be noted, and the franchise would surely love a better return on their four-year, $50-million commitment. He’s a fringe TE2 that could top expectations.

TEs Devin Asiasi and Dalton Keene: Asiasi and Keene were supposed to be a long-term starting duo at tight end as third-round selections in the 2020 NFL Draft, but the pairing has combined for just five receptions to start their careers. Because of his potential as a seam-stretcher, we’d lean towards Asiasi for those holding onto hope as a dynasty stash.

There are a few options to choose here, but Agholor gets the nod because most flat out dismiss him as a real-life player and fantasy option. The last time Agholor was written off following his final season with the Eagles, he went for a 48/896/8 line in Las Vegas while averaging 18.7 yards per reception. If he and Mac Jones have a stronger connection this season, Agholor should at least have some big games.

Almost everyone doubting Jones’ potential as a top NFL quarterback coming out of Alabama will cause him to be perennially undervalued (see: Josh Allen), but he has the talent as a passer to be in MVP conversations if the Pats return to the playoffs and open up the passing attack. Jones should arguably be a top-15 dynasty quarterback based on what he showed as a rookie.

Following back-to-back games with a combined ten carries in Week 3 and Week 4 last season, Damien Harris went on a 17-game pace of 236 carries, 1,170 rushing yards, and 22 rushing touchdowns over the final 11 games.