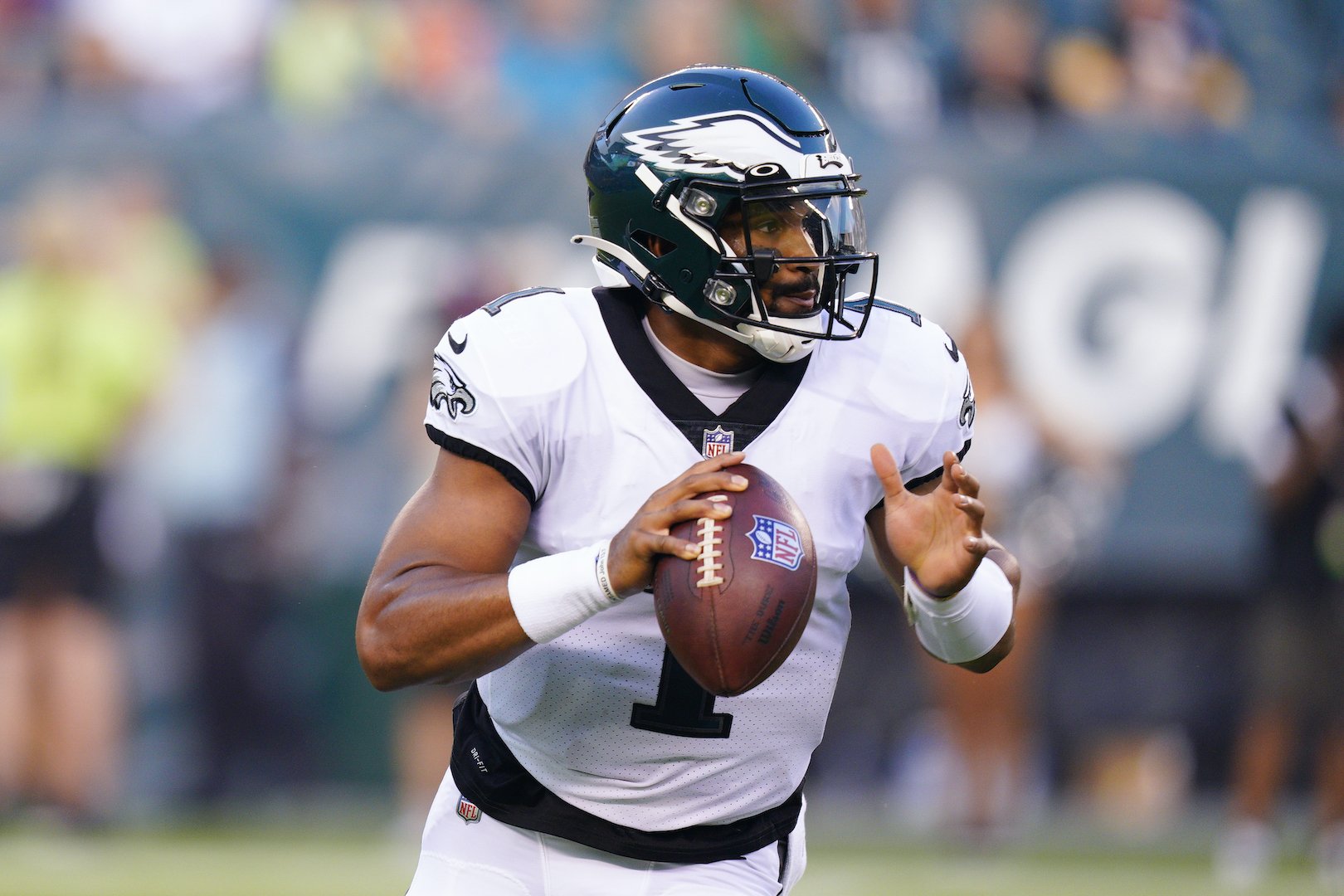 QB Jalen Hurts: Hurts was the No. 3 overall fantasy scorer behind only Josh Allen and Jonathan Taylor before suffering an ankle injury in Week 12 last season—and he now enters Year 2 as the clear starter with close friend A.J. Brown joining DeVonta Smith at wide receiver. We expect the Eagles will continue leaning on Hurts as a runner in addition to increased passing upside/volume, so he should be able to take a leap in 2022 and should be ranked as a top-five option in redraft leagues.

RB Miles Sanders: Aside from the Eagles having one of the league’s best offensive lines, the trade for A.J. Brown will result in lighter boxes for Sanders, and the Eagles added zero backfield competition via free agency or the draft (though undrafted rookie Kennedy Brooks is a name to watch this summer). Unfortunately, a featured workload is unlikely by Sanders’ own admission, and it feels like Philadelphia could be a team that adds a veteran—perhaps Jordan Howard again—next month. Sanders remains a low-end RB2/FLEX that will be reliant on chunk gains.

RB Kenneth Gainwell: Last year, the role for Gainwell was completely unpredictable—at one point, a game with 17 touches for 87 yards and a touchdown was followed up by two combined touches over the next three games—but he saw some goal-line work and has room to increase production as a receiver in his second season. All running backs for the Eagles should be watched behind one of the league’s best offensive lines, and Gainwell is a good value in all formats that should get a boost in full PPR leagues.

RB Boston Scott: Scott led the backfield with seven rushing touchdowns last year (compared to zero for Miles Sanders), and he’s put up at least solid numbers whenever given the opportunity with the Eagles. This year, Scott might be the clear No. 3 runner assuming the starter is healthy and Gainwell sees a good chunk of receiving work, but it wouldn’t be at all surprising to see him again put himself into the FLEX conversation as the season progresses.

RB Kennedy Brooks: Our bold prediction for the Eagles in our 2022 draft guide was Brooks leading the team in fantasy points among running backs, and it’s worth noting that he played with Jalen Hurts at Oklahoma. Again, with Philly having arguably the top offensive line in the league, Brooks will be firmly on the fantasy radar if he cracks the 53-man roster.

WR A.J. Brown: Brown going from Tennessee to Philadelphia has caused his stock to drop (consensus WR11), but there doesn’t seem to be a legitimate reason for it. Really, the only issue Brown has had throughout his career is durability, as he’s one of the NFL’s best wide receivers with stretches of being unstoppable when he gets hot, and the soon-to-be 25-year-old has a 17-game average of 73 receptions, 1,184 yards, and nine touchdowns through 43 career games (on just 6.9 targets per game). If healthy, Brown could put up the best numbers of his career.

WR DeVonta Smith: While the Eagles now having Brown will lead to less volume for Smith, it will also lead to more one-on-one coverage—and last year’s first-rounder proved that he’s one of the game’s best route runners with the ability to create an inordinate amount of space. If Jalen Hurts is able to make an expected leap as a passer with the offense opened up, Smith can best his Year 1 production (64/916/5) and have more downfield success thanks to the attention Brown will draw.

WR Quez Watkins: Increased single coverage should also be true for Watkins—who possesses 4.3 speed and averaged 10.4 yards per target last season. Of course, an overall decrease in opportunities and increase competition for targets in general could hurt, but Watkins can be a speed threat that pays dividends with one big play as a Hail Mary option for DFS players.

WR Zach Pascal: It will be interesting to see how the playing time is split between the wideouts behind Brown and Smith, but Pascal could have an edge as a familiar option for Nick Sirianni. When together with the Colts in 2019/2020, Pascal went for lines of 41/607/5 and 44/629/5 while averaging a very respectable 8.6 yards per target.

WR Jalen Reagor: Reagor should be able to make the team if he shows enough in camp, but his roster spot doesn’t appear to be a lock following another disappointing season. It feels like his pure speed and athleticism haven’t really shown up offensively, and the 2020 first-round pick getting more focused from play-to-play might be key to living up to his potential.

WR Greg Ward: Ward only had seven receptions last season, but he appeared in 17 games and caught three touchdowns on the limited opportunities. Because of the increased competition, Ward will have to be a core special-teamer to make the roster and perhaps see time on offense if injuries strike.

WRs John Hightower and Devon Allen: Quez Watkins has the field-stretcher role locked down, so Hightower and Allen need to hope the Eagles want insurance for the perimeter speed at wide receiver. If it’s a battle for one spot, summer performance will be key for the former fifth-round pick (Hightower) and NCAA champion hurdler (Allen).

TE Dallas Goedert: The Eagles shipping Zach Ertz to the Cardinals opened the door for Goedert to be the clear featured tight end in Philadelphia, and he was excellent with a season-long pace of 107 targets, 72 receptions, 1,091 receiving yards, and three touchdowns in 11 games following the trade (including playoffs). Being held out of the end zone in all but one of those games—a multi-score effort with Gardner Minshew at quarterback—isn’t something to be scared off by because the upside is obviously there for more touchdown success, and Goedert should be an excellent midrange TE1.

TE Jack Stoll: Stoll played 32% of the offensive snaps last year and could be the No. 2 tight this season, but we’re expecting the Eagles to slant heavily towards 11 personnel. If Goedert ever misses time, Stoll would be unlikely to see a major uptick in targets.

TE Tyree Jackson: Coming off a torn ACL suffered in Week 18 of last season, Jackson appears to be even more of a dynasty prospect with limited redraft appeal at this point. Based on the timing, it wouldn’t be a shock if he was placed on season-ending IR before Week 1.

TE Grant Calcaterra: Calcaterra has some familiarity with Jalen Hurts from their time together at Oklahoma, and it’s great to see the former college standout getting a shot in the NFL after previously retiring from football due to medical reasons. Last year at SMU, the undrafted rookie caught 38 passes for 465 yards and four touchdowns, and he’s definitely a name to monitor for dynasty owners.

The trade for A.J. Brown has resulted in a precipitous drop for Smith in redraft leagues, but our rankings only have him slightly lower than he otherwise would have been as the clear No. 1 wideout. Smith is a perfect stylistic fit next to Brown, and Dallas Goedert also drawing attention from defenders should lead to a big campaign for the former Heisman Trophy winner.

We view Hurts as a top-five quarterback in dynasty leagues, and now is the time to invest with the Eagles having the firepower for him to put up monster numbers and potentially be in the MVP conversation. As long as he performs, there isn’t reason to worry about Philadelphia targeting a signal-caller in next year’s quarterback-rich draft class.