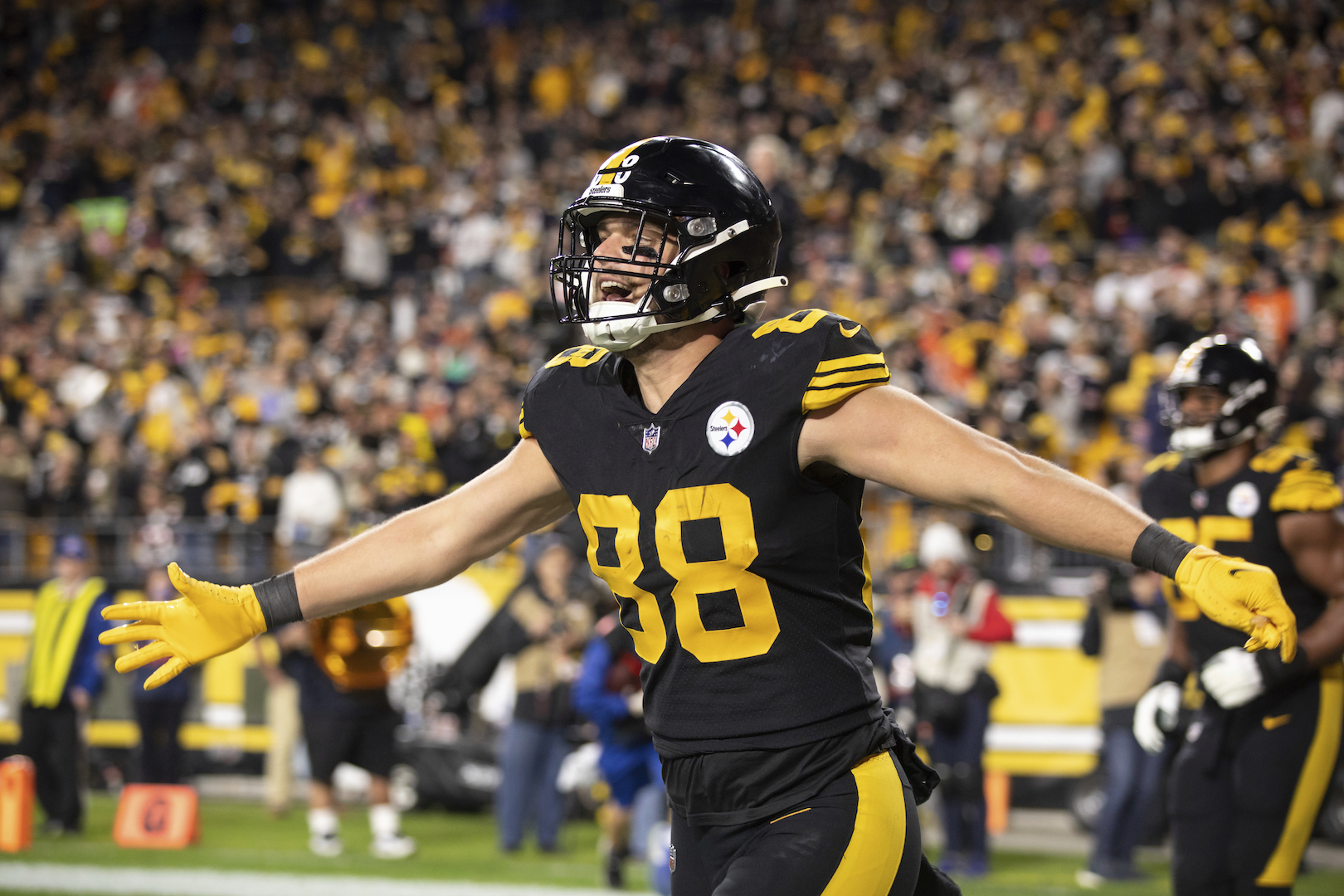 QB Mitchell Trubisky: The quarterback competition for Pittsburgh seems to be slanting heavily in Trubisky’s favor as we enter training camp, and he has sneaky fantasy upside due to his rushing ability combined with a strong supporting cast. For what it’s worth, former teammate Josh Allen said Trubisky is “going to kill it” with his second chance, and we believe he’s been disrespected as a solid quarterback that was 29-21 in Chicago with a 64:38 touchdown-interception ratio playing for coaching staffs that didn’t seem to even want him. Under Mike Tomlin, the Steelers have everything in place for Trubisky to further rebuild his value.

QB Kenny Pickett: The tricky part of Trubisky’s outlook is the fact that Pickett is thought to be an NFL-ready passer that might get the natural tiebreaker in a close battle if he shows out in training camp and preseason action. Whether he hits the field this season or in the future, Pickett will be surrounded by a promising core group of Najee Harris, Diontae Johnson, Chase Claypool, George Pickens, Calvin Austin III, and Pat Freiermuth to grow with. If the starter, Pickett can be a matchup-based streamer this season.

QB Mason Rudolph: Rudolph’s chances of winning the starting job don’t look very promising, but he’s gone 5-4-1 in ten career starts and was talked up by former general manager Kevin Colbert before the 65-year-old’s retirement. Without having to worry about stepping on the toes of Ben Roethlisberger, perhaps Rudolph will surprise in camp—but a trade might be his best chance to make starts in 2022.

RB Najee Harris: Harris was immediately given a heavy workload as a rookie, and that mixed with his dual-threat talent gives the former Alabama standout a strong case to be viewed as a top-five pick. The pass-catching floor for Harris is probably 60 receptions, and Pittsburgh signing James Daniels was one of the underrated big moves of the offseason to help create more runs that reach the second level. Also, Najee is locked into the goal-line role for an offense that may want to recapture some old-school toughness on the ground, so another 1,500-yard campaign with double-digit scores is the expectation in 2022 no matter who is under center.

RB Benny Snell: The selection of Harris last year made Snell a sparsely used backup, and he will likely need an injury (to a very durable starter) to hold any standalone value. Even if the Steelers talk about limiting some of the touches for Harris, we’d expect him to be leaned on when the regular season begins.

RB Anthony McFarland Jr.: McFarland Jr. wasn’t healthy last season with just four touches in two appearances, and he’s in a similar position to Snell by having limited standalone appeal with Najee Harris healthy. That said, the skillset of McFarland Jr. as more of a speed back could result in some chunk gains if enough change-of-pace work ends up being up for grabs.

WR Diontae Johnson: Peppered with targets by Ben Roethlisberger, Johnson will now be catching passes from a new quarterback this season, and more balance—and maybe a slower pace—is expected from the Pittsburgh offense. Still, Diontae worked hard to cut down on the drops in 2021, and he should again put up numbers entering a contract year with Pittsburgh reportedly unlikely to meet the contract demands amidst a booming receiver market. Diontae should be worth a fourth-round pick in 0.5 PPR leagues.

WR Chase Claypool: Claypool had problems with consistency and maturity last year—leading to his long-term standing with the Steelers being in question with rookies George Pickens and Calvin Austin III now on the roster. The former Notre Dame star possesses a rare combination of size and athleticism, though, so he needs to have more focus this summer to show he can still be an impact player for Pittsburgh. If he appears to be the clear No. 2 wideout with a strong camp, Claypool can be a summer riser.

WR George Pickens: As a rookie, Pickens is projected to be the third receiver on a run-heavy, defensive-minded team, so it might take an injury to Chase Claypool (or flat out beating him out) to have reliable redraft value. However, the second-rounder can threaten the defense vertically while also creating separation on shorter routes in a six-foot-three frame; plus, Pickens’ ability as a blocker might keep him on the field if the coaching staff gets consistent focus out of the rookie.

WR Calvin Austin III: It’s very interesting that the rival Ravens were targeting Austin before the Steelers took him, and he could realistically be the No. 2 wideout by next season if Diontae Johnson leaves in free agency and the team doesn’t get what they’re hoping for out of Chase Claypool. On the flip side, Austin might be a better real-life option with his ability to contribute in a variety of ways (including the return game), and we wouldn’t expect two Pittsburgh rookies to have redraft value at wide receiver.

WR Miles Boykin: Sticking with the Steelers-Ravens connection, Boykin is switching sides in the rivalry and is at least worth looking at as a dynasty option. The 25-year-old is a high-level blocker on the perimeter, and perhaps his pure athleticism (4.42 speed and 43.5-inch vertical at six-foot-four) will be unlocked with a change of scenery.

WR Anthony Miller: We doubt Pittsburgh had the foresight to preemptively get Miller last year as a familiar face for projected starter Mitchell Trubisky in 2022, but the two playing together for three years in Chicago—where Miller flashed impressive talent—is notable. He could possibly see a decent number of snaps if Diontae Johnson ever goes down (or is a surprise holdout).

WR Gunner Olszewski: An All-Pro returner for the Patriots in 2020 that could have been given the honor again last year, Olszewski will be a massive boost to the return game for a franchise that is wisely prioritizing it. From a fantasy perspective, it’d be a surprise if Olszewski become a significant factor on offense.

TE Pat Freiermuth: The danger of investing in Freiermuth as a TE1 option for 2022 is the change at quarterback for Pittsburgh, as Ben Roethlisberger dotted him with 20 targets in the red zone (ninth-most in the NFL), and the Steelers could easily go from the top five to the bottom five in pass attempts. We remain high on the talent, but Freiermuth could be too touchdown dependent to view as a clear top-12 option.

TE Zach Gentry: Gentry played well as the No. 2 tight end last year with Eric Ebron missing most of the season, but it’d be a surprise if he surpassed the numbers (19 receptions for 167 yards) by a meaningful amount. The best chance for the six-foot-eight to be a fantasy factor would be an injury to Freiermuth that expands his role in scoring territory.

TE Connor Heyward: The younger brother of star defender Cameron Heyward, Connor was selected in the sixth-round of the 2022 NFL Draft as a versatile offensive player that can play fullback or tight end (in addition to being a pure running back in a pinch). Heyward lasting a decade-plus in Pittsburgh like his brother is very possible, but consistent fantasy value likely won’t match his actual contributions.

Harris should probably be drafted in the No. 4 to No. 6 overall range in 0.5 PPR leagues, so his ADP being No. 8 overall makes him a first-round value if he slips slightly. It seems some “experts” might be down on Harris because he isn’t a huge threat to break long runs, but it’d be a mistake to bet against one of the NFL’s top all-around backs.

Pickens being ranked as the WR57 in dynasty leagues is a bargain, and he would have likely been a first-round pick if not for his combination of injury history and some maturity issues shown at Georgia. Whether or not he is a big-time contributor in Year 1, we’re expecting Pickens to be viewed as a WR3 option by 2023 based on the talent and hopeful flashes shown.

Najee Harris had 11 games with 20+ touches as a rookie. He averaged 19.2 fantasy points per game in those outings, which would have made him the overall RB2 over a full season.