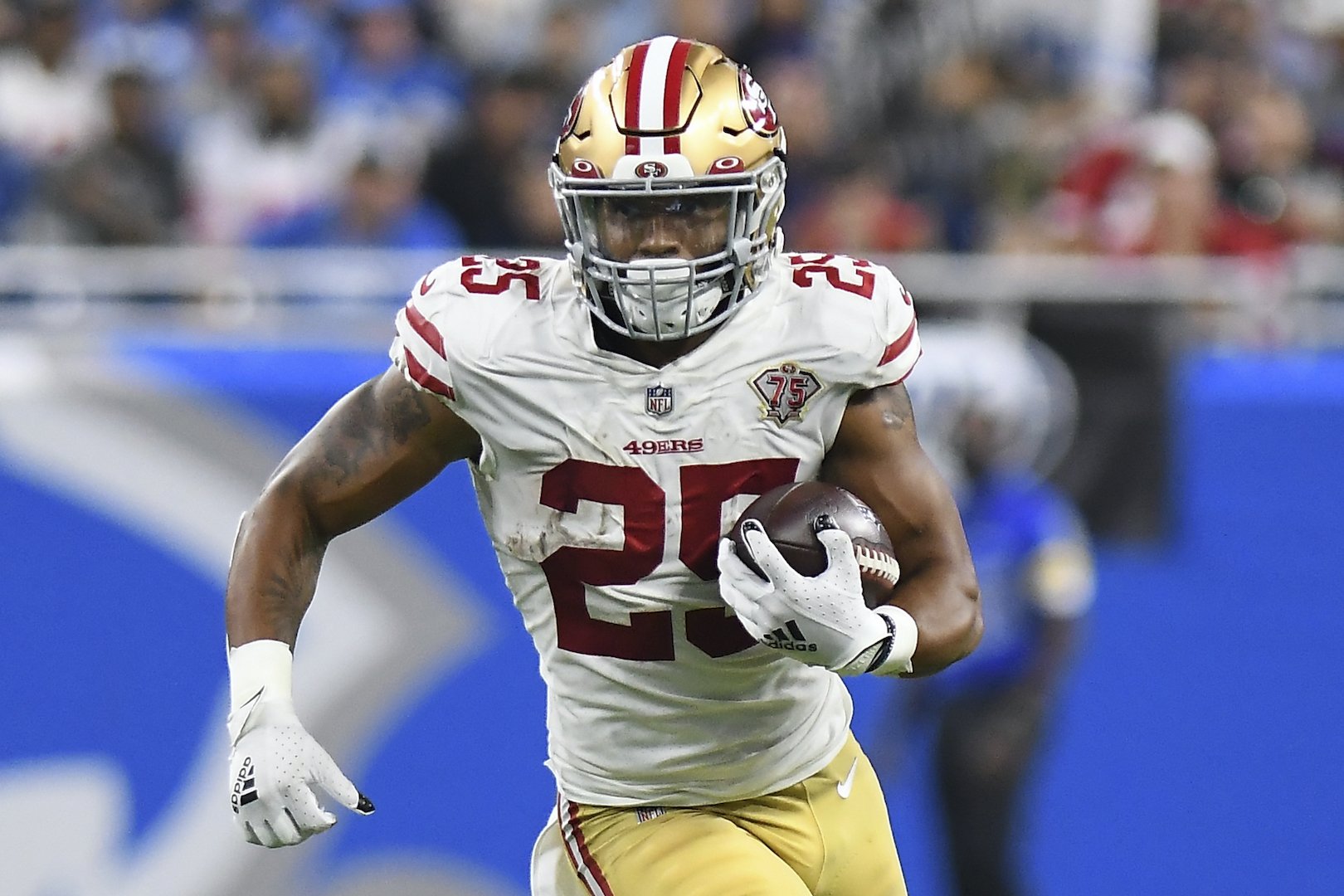 QB Trey Lance: Jimmy Garoppolo remains on the roster to potentially complicate matters, but Lance is set to take over as the starting quarterback in San Francisco this season—and the fantasy potential is extremely exciting because of his dual-threat skillset. You can be sure that Kyle Shanahan will feature Lance as a runner in addition to trying to make things easy on him as a passer, so last year’s No. 3 overall pick is in the perfect spot to reach his potential. There might be some growing pains, but Lance should be ranked as a QB1 based on his ceiling.

QB Jimmy Garoppolo: Garoppolo’s spring shoulder surgery caught San Francisco by surprise and knocked down his trade value for teams hoping to have a quarterback that can participate for the entire offseason, but the franchise has now—with Deebo Samuel and Nick Bosa up for extensions—given him permission to seek a trade. We are very high on Jimmy G as an NFL quarterback, and Seattle or Cleveland (assuming a lengthy suspension for Deshaun Watson) are his top potential landing spots.

RB Elijah Mitchell: The rare blend of speed and physicality made Mitchell a perfect fit in Kyle Shanahan’s system as a rookie, and even with the offense changing a bit with Trey Lance under center, you can be sure the running game will remain the focus. While durability feels like it could be an annual issue for Mitchell because of how fast/hard he often charges through the line of scrimmage, you’ll want his big-play ability in the lineup as an RB2 whenever healthy.

RB Tyrion Davis-Price: Reading the tea leaves, Trey Sermon could be on the way out of San Francisco and doesn’t really seem to be a player Kyle Shanahan wants—so Davis-Price could immediately be the backup and long-term complement to Elijah Mitchell. Jeff Wilson Jr. was brought back by the Niners, but we’d expect Davis-Price to get every opportunity to carve out a role on a run-heavy, Trey Lance-led offense. That said, he’ll need to earn his snaps in training camp.

RB Trey Sermon: To us, it feels like Sermon was a John Lynch guy (rather than a Kyle Shanahan target) coming out of Ohio State, and a change of scenery might be best to get his career off the ground. If given a heavier workload, Sermon is a creative runner that can also catch the ball and hold up in pass protection; the Eagles immediately come to mind as a fit, and he’s still worth late-round consideration for early drafters hoping he can break through with the 49ers or someone else.

RB Jeff Wilson Jr.: While Wilson Jr. is apparently the frontrunner for the No. 2 job, we are going to ignore speculation from beat reporters about the San Francisco backfield after they had no clue about the belief in Elijah Mitchell last summer. Still, Wilson Jr. will be healthier with no knee injury impacting him, and the veteran is a physical runner that has produced when called upon.

WR Deebo Samuel: There is a chance Samuel and the Niners agree to an extension before the season, but the versatile weapon remaining adamant about not wanting to be used as a running back this season would be a serious ding to his outlook. Plus, Trey Lance is an unknown (especially compared to Jimmy Garoppolo’s ability to put the ball on the money for run-after-catch opportunities), so Deebo might be better viewed as a low-end WR1 despite last year’s overall WR3 finish.

WR Brandon Aiyuk: The 2021 campaign was a tale of two seasons for Aiyuk, as he started with zero targets in the opener and was a role player for about six weeks until finally becoming a core target the rest of the way (73/1,128/6 pace over the final 11 games). The end-of-season numbers were quite impressive considering how the year started, but he’s another weapon that could be negatively impacted by the switch from Garoppolo to Lance at quarterback. Draft him as a volatile FLEX that can have a big year if Lance’s arm talent has the opposite effect by expanding the passing attack.

WR Jauan Jennings: Jennings has established himself as a reliable depth option at wide receiver, and he should at least split the No. 3 role behind Samuel and Aiyuk. The former Tennessee standout has five touchdowns on just 38 targets last season, and he saved his best performance for the regular season finale with a 6/94/2 line.

WR Danny Gray: A speed threat out of SMU, Gray was drafted in the third round of the 2021 NFL Draft after blazing a 4.33 40-yard dash and averaging 16.4 yards per reception for the Mustangs last season. Notably, the rookie made the most of limited carries in college with six rushes for 70 yards and two touchdowns, so it wouldn’t be a surprise if Kyle Shanahan has some gadget plays in mind—or views Gray as Deebo insurance.

WR Ray-Ray McCloud: McCloud is another name with experience being used on designed touches, and he showed well in increased action for the Steelers in 2021 by catching a career-high 39 passes. The 25-year-old made it known entering free agency that he wanted to continue playing for Mike Tomlin, so it’s probably safe to assume Shanahan assured him of a meaningful role (including on special teams).

WRs Marcus Johnson and Malik Turner: If the 49ers keep a sixth wideout, Johnson and Turner would appear to be the top candidates for the role. Focusing on Johnson, he’s quietly averaged 17.3 yards per reception on 88 targets over the past four seasons and shouldn’t be written off as a potential vertical specialist.

TE George Kittle: Mark Andrews (235.1 fantasy points) and Travis Kelce (205.4) clearly separated themselves from the pack in 2021, but Kittle finished as the overall TE3 with 159.0 fantasy points, and the 28-year-old is squarely in his prime. Trey Lance being a mystery is the factor that puts Kittle below the other potential high-end TE1 options, but the former All-Pro has had some huge performances with quarterbacks other than Jimmy Garoppolo in the past—with a 17-game sample size since his rookie season of 103 receptions, 1,558 yards, and six touchdowns.

TEs Tyler Kroft: Kroft has been hampered by injuries in recent years, but he has a chance to contribute behind George Kittle as the No. 2 tight end and previously has a season with seven scores under his belt. Although it’s certainly possible he forms a connection in scoring territory with Trey Lance, Kroft won’t be a recommended fantasy option in redraft leagues.

There is something to be said about the frustration surrounding a Shanahan offense and how much he can switch up the backfield, but Mitchell quickly became a favorite and has unmatched big-play ability on outside zone runs. You could even make the case San Francisco’s selection of LSU running back Tyrion Davis-Price in the third round further emphasizes their commitment to the run and won’t be a negative for Mitchell’s outlook because the starter has a different skillset than the rest of the backfield.

Sermon versus Davis-Price versus Jeff Wilson Jr. for the between-the-tackles role is likely the real battle in the backfield, and we’re not ready to give up on last year’s talented third-round pick. Perhaps the new Lance-led offense will result in Sermon being unleashed, and it’s notable that he watched a lot of Alfred Morris tape as a rookie. In a run-heavy attack, there is room for both Mitchell and Sermon to thrive.

In eight games prior to being fully unleashed as a running back last season, Deebo Samuel was on pace for a 104/1,874/8 receiving line. He only had six carries in those games, and then totaled 53 rushing attempts for 343 yards and seven touchdowns over his final eight outings.