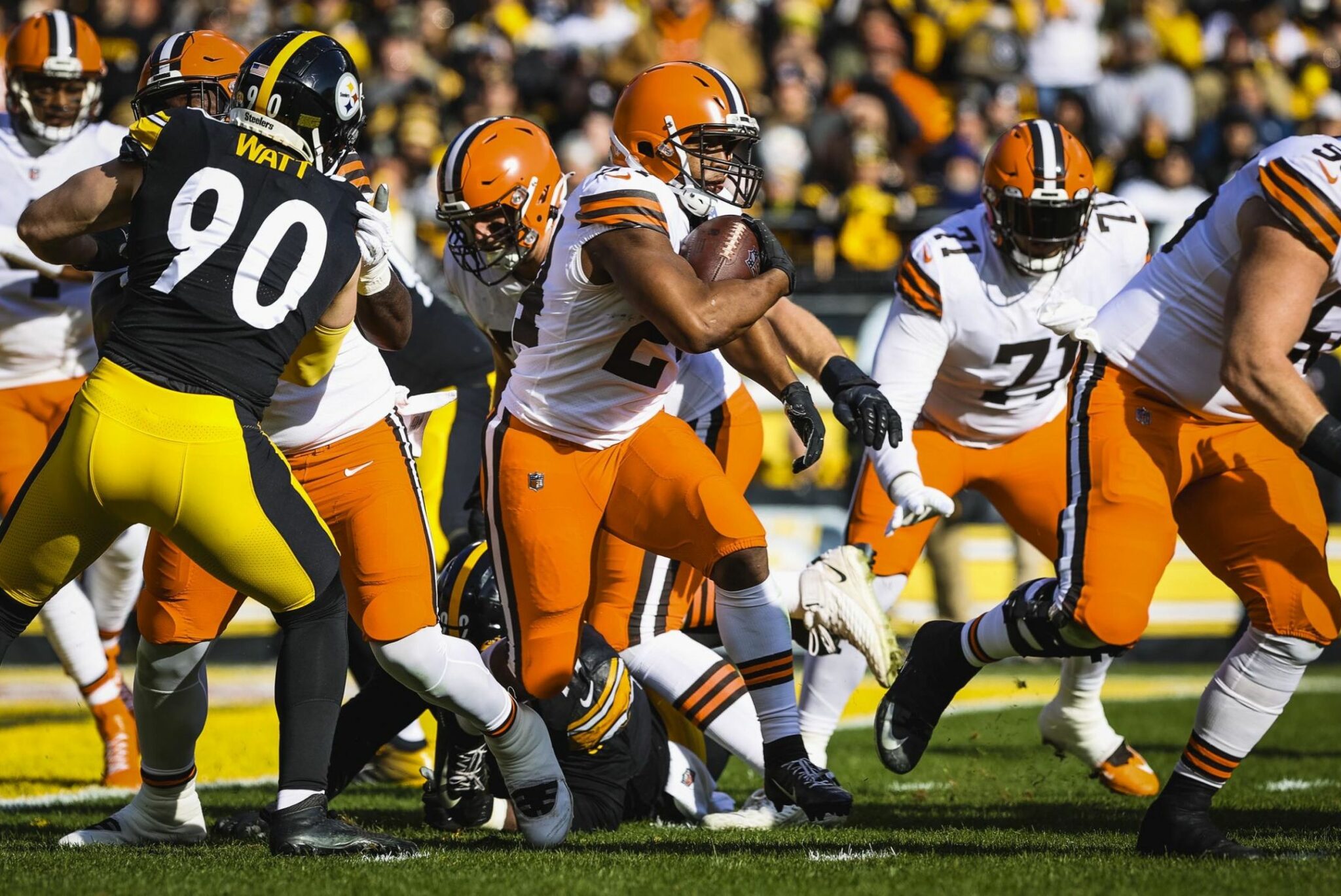 Wilson finishing as the overall QB1 of Week 18 doesn’t really help those that drafted him as a hopeful top-five option, but it was an encouraging performance as we look towards 2023. Despite all the disappointment of the season, Wilson ended the campaign with 23.0+ fantasy points in three of his final four outings.

The Browns still did not run close to enough as Chubb handled 12 carries in the finale, but he made up for it with efficiency (77 rushing yards) and his best receiving output of the year by catching five-of-six targets for 45 yards and a touchdown. On the year, Chubb set or matched career-highs in carries (302), rushing yards (1,525), and rushing touchdowns (12).

Things weren’t looking good for Moss early as the Colts fell behind to Houston, but they actually remained committed to the run with the former Bill handling 18 attempts for 114 yards and a touchdown—on which he powered through defenders into the end zone. Based on his performance over the past month, Moss should be the favorite for No. 2 duties behind Jonathan Taylor in 2023.

Los Angeles surprisingly playing their starters for most of the game yesterday allowed Allen to have his best game of the season—catching eight passes for 102 yards and two touchdowns in a 31-28 loss. The status of Mike Williams (back) is key for the Chargers making a deep run this month, but Allen should be a target hog either way.

While a three-game absence from a concussion suffered in early December made Parker’s role a bit uncertain in his return, he was the top target for Mac Jones in the finale with six receptions, 79 yards, and two highlight touchdown grabs. Under contract for a very reasonable $6.3 million next season, Parker should be a value in fantasy drafts.

Akins had a 4/70/2 line on Sunday to help the Texans get a win over the Colts, and he is unlikely to have a more impactful catch than the 28-yard touchdown—on fourth-and-28—in the final minute to make it a 31-30 score before Houston converted the two-point conversion… knocking them out of the No. 1 overall pick in the 2023 NFL Draft.

Other options could have been considered here, but Williams gets the definite edge with a two-touchdown performance on Sunday Night Football to give the Lions an upset win over Green Bay. In the process, Williams tied and then broke Barry Sanders’ franchise record for single-season rushing touchdowns with his 16th and 17th scores of the season.

History will never forget Nyheim Hines returning the opening kickoff for a touchdown in Buffalo’s first game since Damar Hamlin went down last Monday night—and the explosive returner followed it up with a second touchdown in the third quarter. Even with some yardage and points allowed, Buffalo’s D/ST was able to also force three interceptions to finish with 19.0 fantasy points.

Philadelphia’s offense struggling with Jalen Hurts dealing with a shoulder injury allowed Elliott to benefit—hitting all five of his field goal attempts (including two from 50+ yards) to finish with 20.0 fantasy points.

Surprise of the Week: Davis Webb

For the second week in a row, someone making their first career start gets the nod here—as Webb was very impressive by completing 23-of-40 passes for 168 yards and a touchdown while also rushing six times for 41 yards and another score on the road versus a not-resting Philly defense. Other than getting a win, the game played out as New York would have hoped to keep their edge ahead of the postseason.

On the other hand, Dallas played all their starters in the finale and did not look sharp at all—with Dak Prescott (8.72 fantasy points) continuing to struggle while Ezekiel Elliott (1.0) and Tony Pollard (1.9) were completely bottled up on the ground. If you were counting on anyone other than CeeDee Lamb (13.7) on Sunday, it was a major disappointment.

Rookie of the Week: Drake London

There was a lengthy slump in the middle of the season, but London started hot as a rookie and then finished great with six receptions for 120 yards in the finale—giving him his first 100-yard game. Including yesterday, London had 70+ receptions in four of his final five games.

It felt as if the Chargers would either rest their starters altogether—after Baltimore’s loss locked them into the No. 5 seed—or play them briefly, so Allen starting with a 14-yard touchdown on the game’s opening drive and then racking up numbers throughout the afternoon until ending his day with a three-yard score from Chase Daniel late in the fourth quarter resulted in his best outing of the season. There weren’t a ton of huge performances in Week 18, so Allen easily led the way with 26.2 fantasy points.