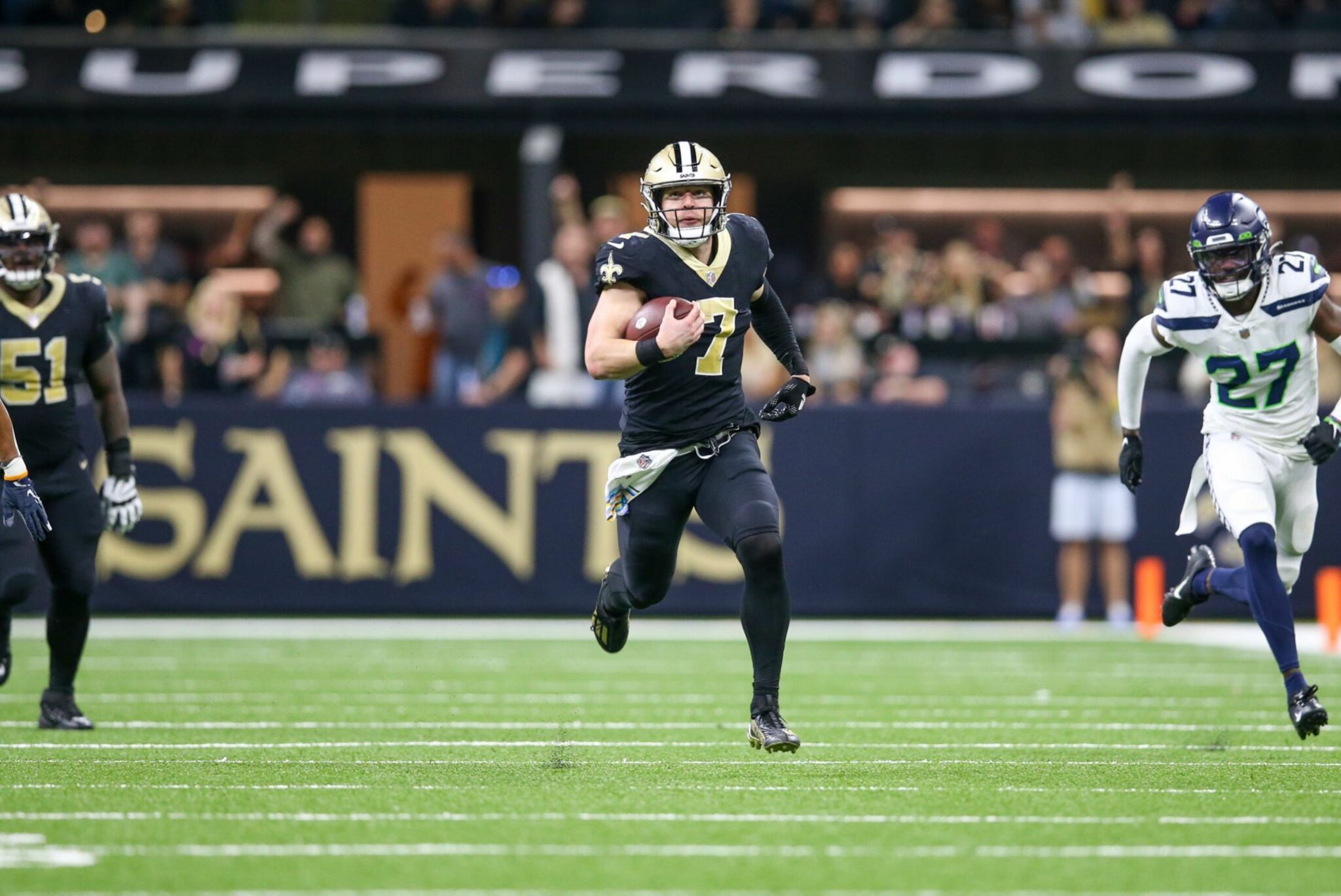 The Steelers without T.J. Watt (pectoral) had no chance versus Buffalo’s offense, as Allen went for season-highs in passing yards (424), passing touchdowns (four), and fantasy points (35.16) in a 38-3 victory. Through five games, the new overall QB1 is averaging 29.3 fantasy points per game, and he’ll be the top start of Week 6 versus Kansas City.

Early-season disappointments have been erased for Ekeler—who followed up a three-touchdown performance last week with 33.9 fantasy points in another shootout win against Cleveland. Overall, the dynamic back rushed 16 times for 173 yards and a touchdown while adding four receptions for 26 yards and another score.

The receiving production for Fournette (10/83/1) was a tremendous boost for fantasy owners, and he also found the end zone as a runner from one yard out. Even with rookie Rachaad White coming on over the past two weeks, Fournette is getting plenty of work in a high-powered offense.

Davis started off Sunday’s game with a 98-yard touchdown reception on the opening drive, and he followed it up with another long score (62 yards) with a highlight one-handed grab. Hopefully fantasy owners remained patient with a talented player, and Davis will now get a rematch against the Chiefs after he torched them for four touchdowns in the playoffs.

The “cooking” continued for Geno Smith in Week 5, and Lockett had his best game of the season because of it—hauling in five passes for 104 yards and two touchdowns. The veteran had now cleared 76 receiving yards in every game since the opener.

Despite a couple of touchdowns, Hill’s role had been a bit contained over his first three games, so it was a pleasant surprise for the previously 1-3 Saints to unleash him in yesterday’s win—resulting in nine carries for 112 yards and three touchdowns. We’ll see what happens when Michael Thomas (foot) is back in the lineup, but Hill should be featured every week.

Hall was unstoppable on 20 touches in a win over the Dolphins—rushing 18 times for 97 yards and a touchdown while adding two receptions for 100 yards on just two targets. The rising confidence of the Jets and improved play of their defense should raise Hall’s floor and ceiling against the difficult stretch starting in Week 6 (@ GB, @ DEN, v NE, v BUF).

Dallas started off the win over the Rams with a strip sack for a touchdown by DeMarcus Lawrence, and they were dominant all day with the lone touchdown allowed being a remarkable catch-and-run by Cooper Kupp. The three turnovers forced, five sacks, blocked kick, and touchdown resulted in 22.0 fantasy points for the unit.

K: Nick Folk, NE
Folk entered the weekend with just 21.0 fantasy points through four games, but he almost matched that in a 29-0 victory over the Lions with 18.0 fantasy points to lead the position. The schedule sets up favorably for him to return to last year’s form with the Browns, Bears, Jets, and Colts on the docket ahead of New England’s bye.

Surprise of the Week: Dyami Brown

Brown basically had the Lite version of the stat line for Gabe Davis this week—catching two passes for 105 yards and two scores to give Washington their only two touchdowns of the game. The deep threat giving the Commanders another weapon for defenses to account for behind Terry McLaurin, Jahan Dotson, and Curtis Samuel would be a significant help to a 1-4 team.

Disappointment of the Week: Tee Higgins

There were a bunch of disappointments in Week 5, but getting zero points out of Higgins on just ten snaps played was the dagger to plenty of fantasy hopes last night. It really doesn’t get much worse than needing a point or two from a stud to win a matchup and having them not get it.

Rookie of the Week: Breece Hall

A couple of one-yard touchdowns by Michael Carter was difficult for fantasy owners to watch with Hall doing much of the work to get into scoring position—but the rookie eventually found the end zone for himself from five yards away in a breakout game. While the 100 receiving yards obviously boost the numbers, Hall is now on pace for 190 carries, 935 rushing yards, 58 receptions, 724 receiving yards, and ten total touchdowns this season.

Hill makes it two weeks with a row that a tight end is given MVP honors, and he did it without even catching a pass. At the very least, Hill should remain a substantial weekly factor near the goal line, and those who drafted him in best ball leagues have to be thrilled with what they’ve seen through five weeks.