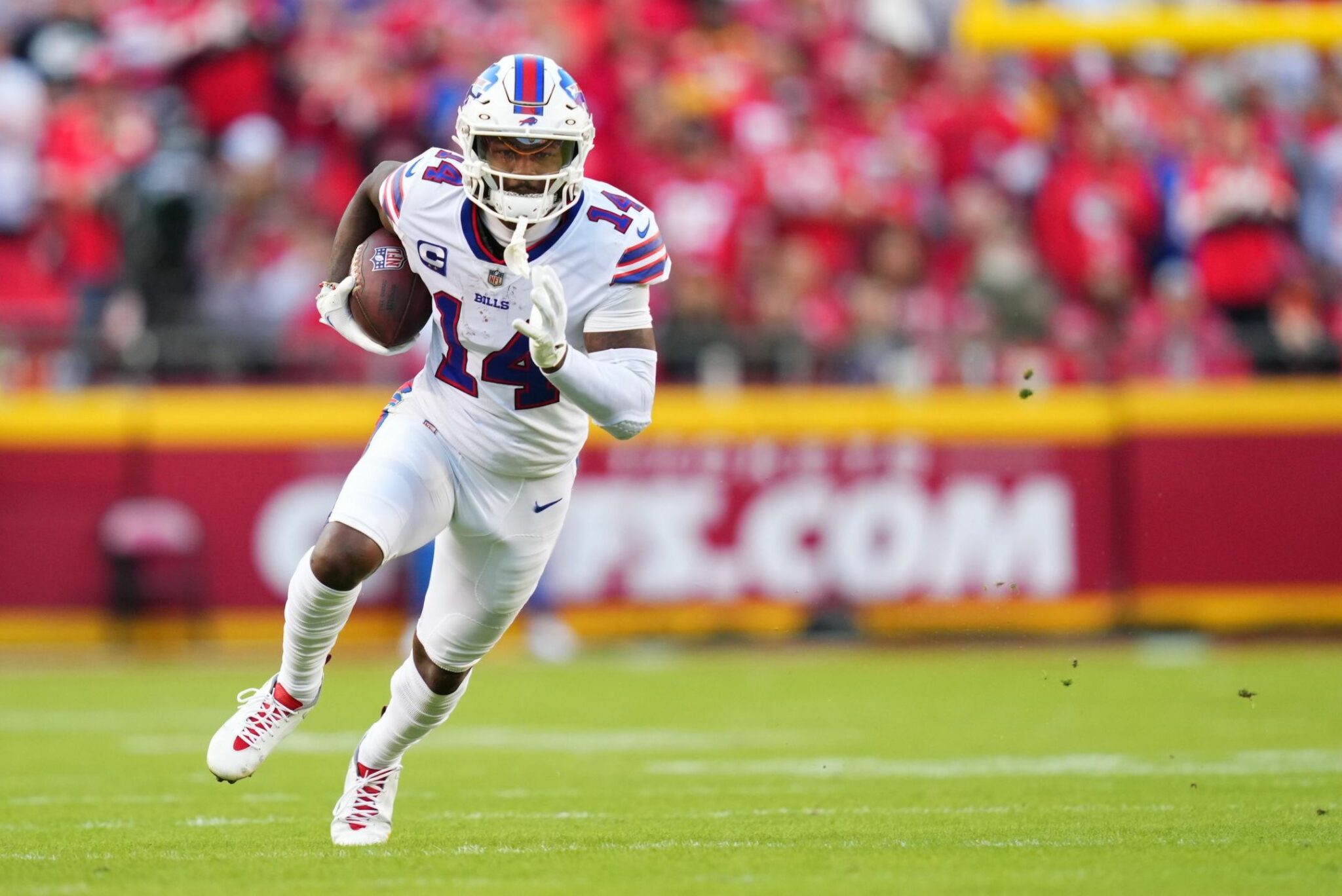 A familiar spot with Burrow returning to the Superdome—where he won a national championship for LSU—didn’t lead to disappointment, as the former Heisman winner threw for 300 yards and totaled four touchdowns in a 30-26 victory against New Orleans. Burrow now has a 10:1 touchdown-interception ratio since his four-interception performance in the opener.

Another heavy workload for Stevenson resulted in overall RB1 production—with 19 carries, 76 rushing yards, and two rushing touchdowns (plus four receptions for 15 yards). Even if Damien Harris (hamstring) is back next Monday night, Stevenson should remain locked into lineups for a great matchup against the Bears.

The Colts finally got their running backs more involved in the passing game, and Jackson was the beneficiary with ten receptions (on ten targets) for 79 yards in a 34-27 victory. The second-year runner also had 12 carries for 42 yards and a touchdown before leaving with a quad injury, so his status will be monitored closely if Jonathan Taylor (ankle) remains out after Indy improved to 3-2-1.

A breakout for Chase felt inevitable in Week 6, and after a quiet first half, he exploded for touchdowns of 15 yards and 60 yards (the game-winner) in his return to Louisiana. Overall, the talented wideout went for a 7/132/2 line to get back to his high-end WR1 ways.

Diggs had been contained in the battles between the Bills and Chiefs over the past few years, but that changed in this year’s matchup with ten receptions for 148 yards and a touchdown in the 24-20 victory. Based on how great the Buffalo offense has been to begin the season, Diggs might not slow down much from his season-long pace (139/1,859/17).

Gesicki wasn’t a major part of the offense for Mike McDaniel through five weeks, but he exploded with a two-touchdown game as the Dolphins played from behind against Minnesota—resulting in an overall TE1 finish heading into Monday night. Hopefully the production leads to Miami making Gesicki more of a focus between Tyreek Hill and Jaylen Waddle.

All the primary pass-catchers were productive for the 49ers this week, and Aiyuk lead the way with eight receptions for 83 yards and two touchdowns (both in the red zone). Aiyuk has a good shot at remaining productive in Week 7 for a possible shootout against the Chiefs.

There probably weren’t many that even considered starting the Jets defense this week, but they dominated Green Bay with four sacks, a fumble recovery, two blocked kicks, and a touchdown while allowing just ten points on the road. Especially if the Broncos struggle again tonight, New York’s defense will firmly be on the streaming radar next week.

On a day where the Tampa Bay offense routinely stalled out, Succop nailed all four of his field goal attempts—with the high being a 54-yard make at the end of the first half. Despite no extra point attempts, Succop’s day was enough to lead all kickers.

The play of Indy’s offense in the Week 2 loss to Jacksonville made them a passing attack to avoid this week—but Ryan had his best game of the season by throwing for 389 yards and three touchdowns seemingly out of nowhere. The key was Ryan not being sacked after being taken down 19 times in the previous four games, and the Colts are now heading into a matchup versus Tennessee for first place in the AFC South.

Disappointment of the Week: Curtis Samuel

Sunday was another day with quite a few disappointments, but Samuel arguably tops the list with two receptions for six scoreless yards last Thursday night in what was a plus matchup versus Chicago. Of course, the biggest reason for Samuel being the selection is a would-be 40-yard touchdown getting dropped—as it’s tough to see fantasy points slip away that surely changed the outcome of many matchups.

Walker was an immediate top-15 option with Rashaad Penny (leg) done for the season, and he came through in a big way with 21 carries for 97 yards and a touchdown. The rookie also proved (again) that he can catch the ball effectively with two receptions for 13 yards, and Walker needs to be cemented into lineups for the rest of the season.

The passing numbers alone (300 yards and three touchdowns) would have made Burrow a tremendous start, and the rushing production (25 yards and a touchdown) boosted him to 32.5 fantasy points as the clear top scorer ahead of MNF. The Bengals now get a home matchup against the Falcons before taking on the Browns on Halloween Night.