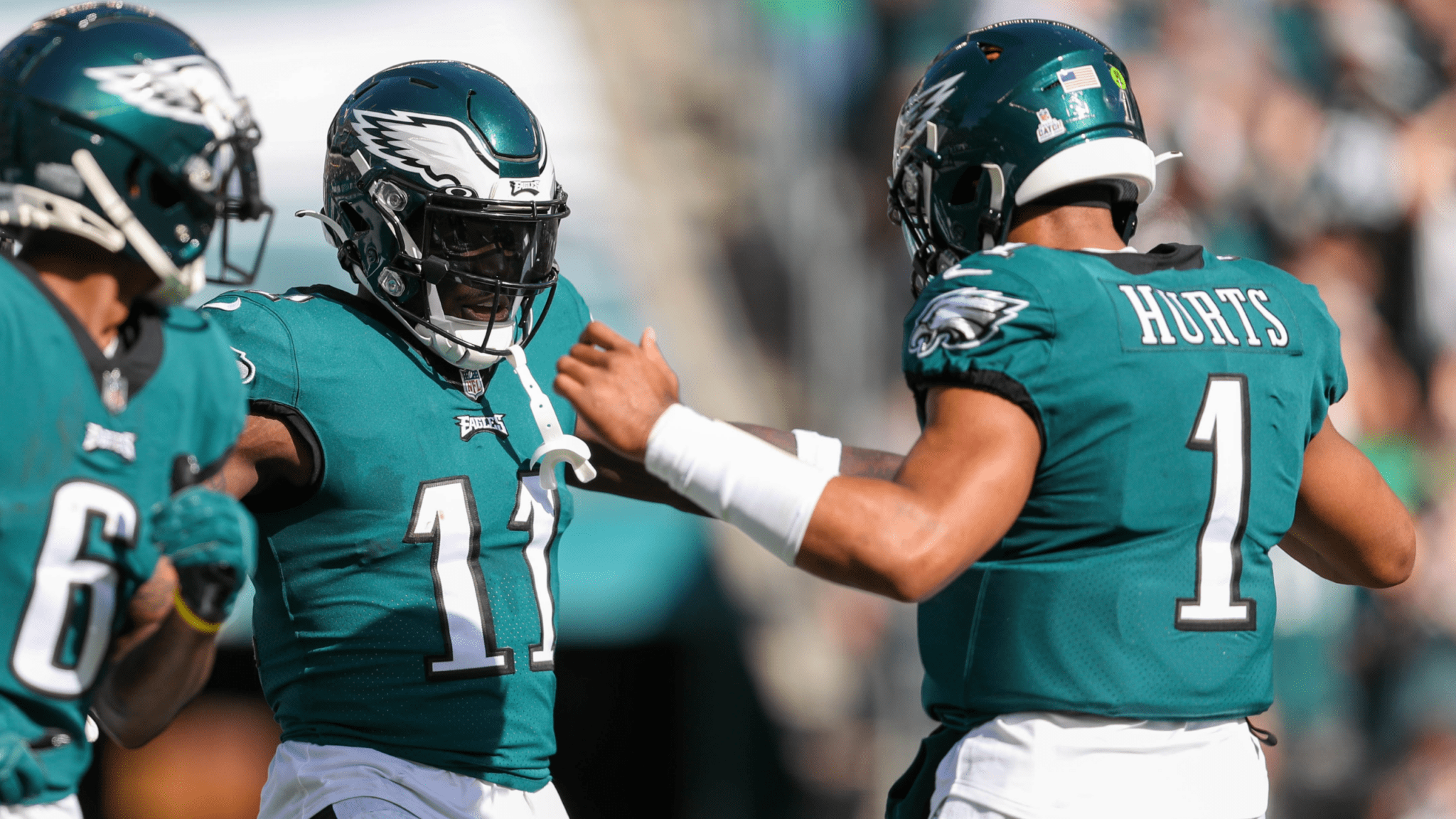 Dolphins-Lions turned into a shootout with Detroit having no answers for the Miami pass-catchers, and Tagovailoa compiled big numbers with 382 yards and three touchdowns through the air in the win. A bye week comes in the middle of the month, but November sets up very favorably for Tua and the Dolphins with games against the Bears, Browns, and Texans.

New Orleans absolutely dominated the Raiders yesterday, and Kamara was the star on offense with 18 carries, 62 rushing yards, one rushing touchdown, nine receptions, 96 receiving yards, and two receiving touchdowns. We’d say a trade is unlikely as the Saints try to claim a weak NFC South, so Kamara’s arrow is pointing up if he continues to be fully featured.

McCaffrey made history against the Rams with a passing touchdown, rushing touchdown, and receiving touchdown—finishing with 36.26 fantasy points in 0.5 PPR leagues. After going off in what was essentially the first full game in a 49ers uniform, McCaffrey is a scary opponent to face and has a case to be the best rest-of-season option.

Brown was featured early and often coming off the bye week, and he had perhaps his best game as a pro with six receptions for 156 yards and three touchdowns—all of which were downfield highlights in the first half. Look for Jalen Hurts, Brown, and the Eagles to put on a show this Thursday night in Houston.

A ten-catch, 103-yard season debut was followed up by a 12/159/1 line for Hopkins, and he’s done more than make up for lost time since returning from his PED suspension. The 30-year-old will try to stay hot versus a divisional stretch to begin November (v SEA, @ LAR, v SF).

Conklin had been extremely quiet in recent weeks, but he broke out of his slump with six receptions for 79 yards and two touchdowns in a loss to the Patriots. While we’d recommend looking elsewhere in Week 9 with the Jets taking on the Bills, Conklin is the clear top option at tight end for New York.

Henry barely making the Team of the Week after another destruction of the Texans shows how explosive Sunday’s action was around the league. With rookie Malik Willis at quarterback, King Henry rushed 32 times for 219 yards and two touchdowns (plus a nine-yard catch) to finish with 35.3 fantasy points.

The Saints limited the Raiders to 183 total yards in a shutout win, and the four sacks and interception of Derek Carr gave them a week-high 14.0 fantasy points. They’ll need to again be on point defensively next Monday night against the Ravens.

New England was again not sharp offensively, but they moved the ball well enough and won the field position battle for Folk to convert all five of his field goal attempts. Although the consistency isn’t what it was last season, Folk had two games with 18+ fantasy points in October.

Talent hasn’t been in question for Moore, but his usage was questionable over the past couple of games—including just two targets in Week 7. But he was unleashed against the Vikings by playing more in the slot, which resulted in seven receptions (on eight targets) for 92 yards and a touchdown (in addition to 12 rushing yards on two attempts). Moore needs to remain involved next month.

Disappointment of the Week: Davante Adams

The whole Las Vegas offense could be mentioned here, but Adams being held to one reception for three yards on five targets was a shocker and led to a loss in plenty of fantasy matchups. Most frustrating about the result is that New Orleans looked awful versus the pass a couple of Thursday nights ago, as the Silver and Black simply couldn’t get going on the road.

Rookie of the Week: Isaiah Likely

Likely was unfortunately not used in many lineups with Mark Andrews active against the Bucs, but a quick night for the starter after leaving with a shoulder injury allowed the rookie to shine—catching six passes for 77 yards and a touchdown. If nothing else, Likely showed he’s worth his high value in dynasty leagues after shining in his first game with over 45% of the snaps played.

A bunch of running backs going off gives the MVP nod to Brown as the clear overall WR1 following a three-touchdown performance, and he’s right up to where we had him in our preseason rankings for the year (WR7). Especially with his bye week already done, Brown is a definite rest-of-season top-five option.