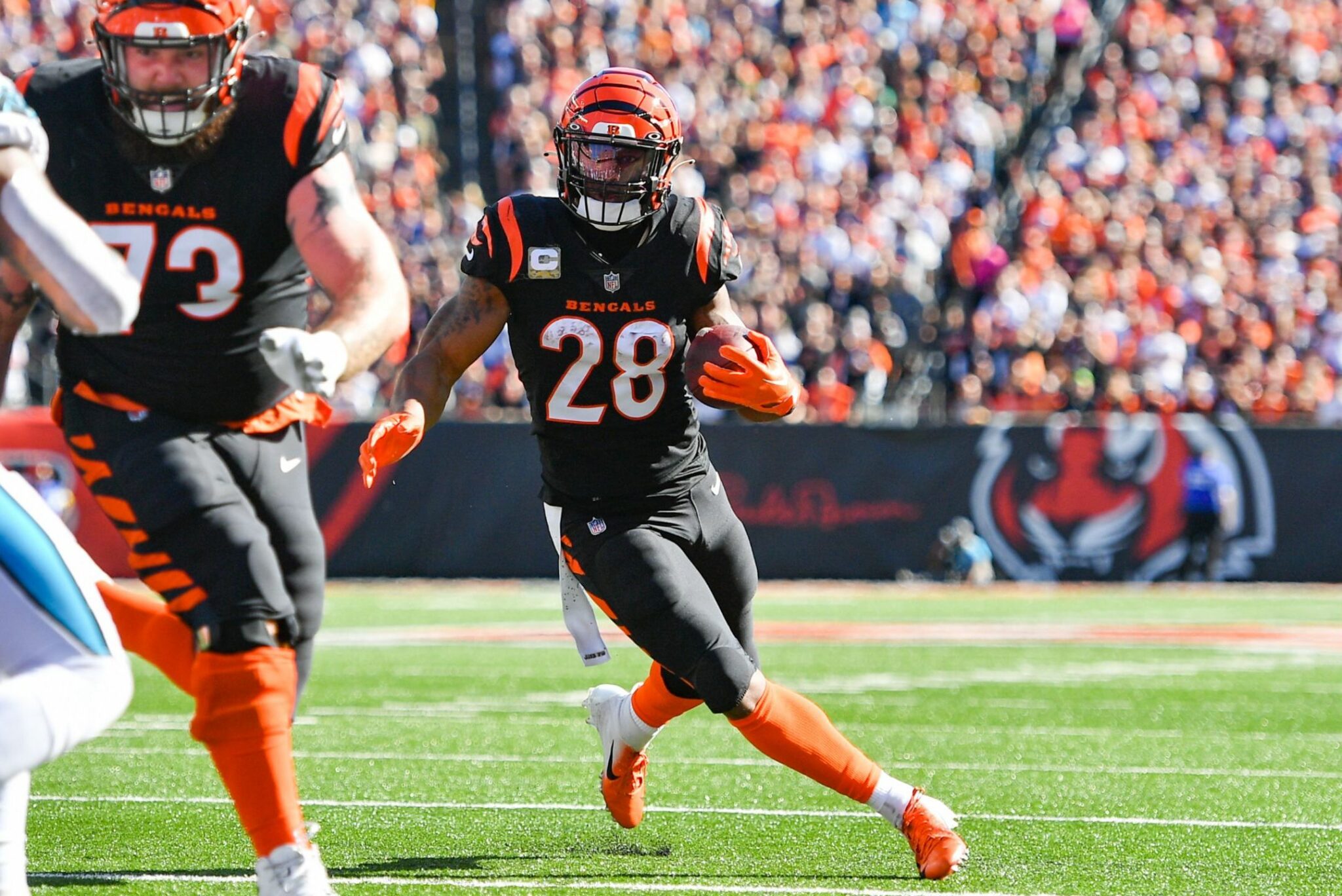 Increased rushing for Fields was taken to another level against the Dolphins—as the young quarterback turned 15 carries into 178 yards and a touchdown on the ground, and he also threw for three scores for the first time in his career. The 61-yard highlight sprint showed the pure speed/athleticism that has been unleashed for Fields over the past few games.

A lot of fantasy analysts have ignorantly called Mixon “washed” this year, but he showed that clearly isn’t the case with 22 carries, 153 rushing yards, four rushing touchdowns, and a 4/58/1 receiving line on Sunday. Overall, the numbers resulted in 53.1 fantasy points in 0.5 PPR leagues as one of the top fantasy performances of all-time.

Walker continued his remarkable rookie campaign with 26 carries for 109 yards and two touchdowns in a win over Arizona, and he’s now on a 17-game pace of 326 carries, 1,741 rushing yards, and 24 rushing touchdowns since Week 5. Consider him a borderline top-five option for the rest of the season.

A monster performance from Adams felt like a lock after he was held to one reception in Week 8, and that’s exactly what happened with ten receptions for 146 yards and two touchdowns against Jacksonville. Most of the production came in the first half as Las Vegas unfortunately blew a 17-0 lead, but fantasy owners will certainly take the day from their WR1.

It’s only taken nine games for Hill to blow past the 1,000-yard receiving mark (1,104 yards), and Sunday was another huge game with seven receptions, 143 yards, and his first trip to the end zone since Week 2. A couple of cupcake matchups for the rest of November (v CLE, v HOU) with a bye mixed in should keep Hill among the high-end WR1 options.

Goedert had his best game of the year last Thursday night with eight receptions (on nine targets) for 100 yards and a touchdown, and he’s taken a leap in terms of raw production (on pace for an 85/1,107/4 line) while remaining very efficient with 10.4 yards per target. Next up is a matchup versus a Washington defense that he’s had some big games on over the past few years.

Jacksonville rode Etienne to a comeback win over the Raiders—feeding him 30 touches for 126 total yards and two touchdowns in the 27-20 victory. Over the past five games, Etienne has rushed 86 times for 536 yards (6.2 YPC) and four touchdowns.

New England was straight-up dominant against the Colts in Week 9—sacking Sam Ehlinger nine times, blocking a kick, and having a pick-six. Overall, the defense limited Indy to 121 total yards and three points (which was the result of a short field).

A somewhat quiet day for kickers allowed Folk to easily top the leaderboard with 17.0 fantasy points, and he nailed all four of his field goals—with three coming from 43+ yards. He should be a top option following a Week 10 bye.

Surprise of the Week: Cole Kmet

Maybe the flood gates opened with Kmet finding the end zone a couple of weeks ago, but he followed it up with a two-touchdown performance against Miami—giving Dallas Goedert (20.0 fantasy points) a run as the overall TE1 for this week with 19.5 fantasy points. The talent is there, so we’ll see if Kmet can stay hot against the Lions.

Disappointment of the Week: Tyler Higbee

As has been the case all year, Week 9 was filled with disappointments, but we’ll go with Higbee after he was limited to zero receptions on just one target with the Los Angeles offense continuing to struggle. Perhaps a matchup versus the Cardinals will cure his woes, as Higbee has combined for 22 scoreless yards over the past three games.

Again, the performance by Mixon was one of the best in fantasy football history, and the crazy part is that he did most of his damage in the first half. For those that roster Mixon, the hope is that excellent outings will become the norm with the offensive line finally gelling, but increased usage as a receiver (with 38 receptions, which already just five away from a career-high) will keep his stock high either way.