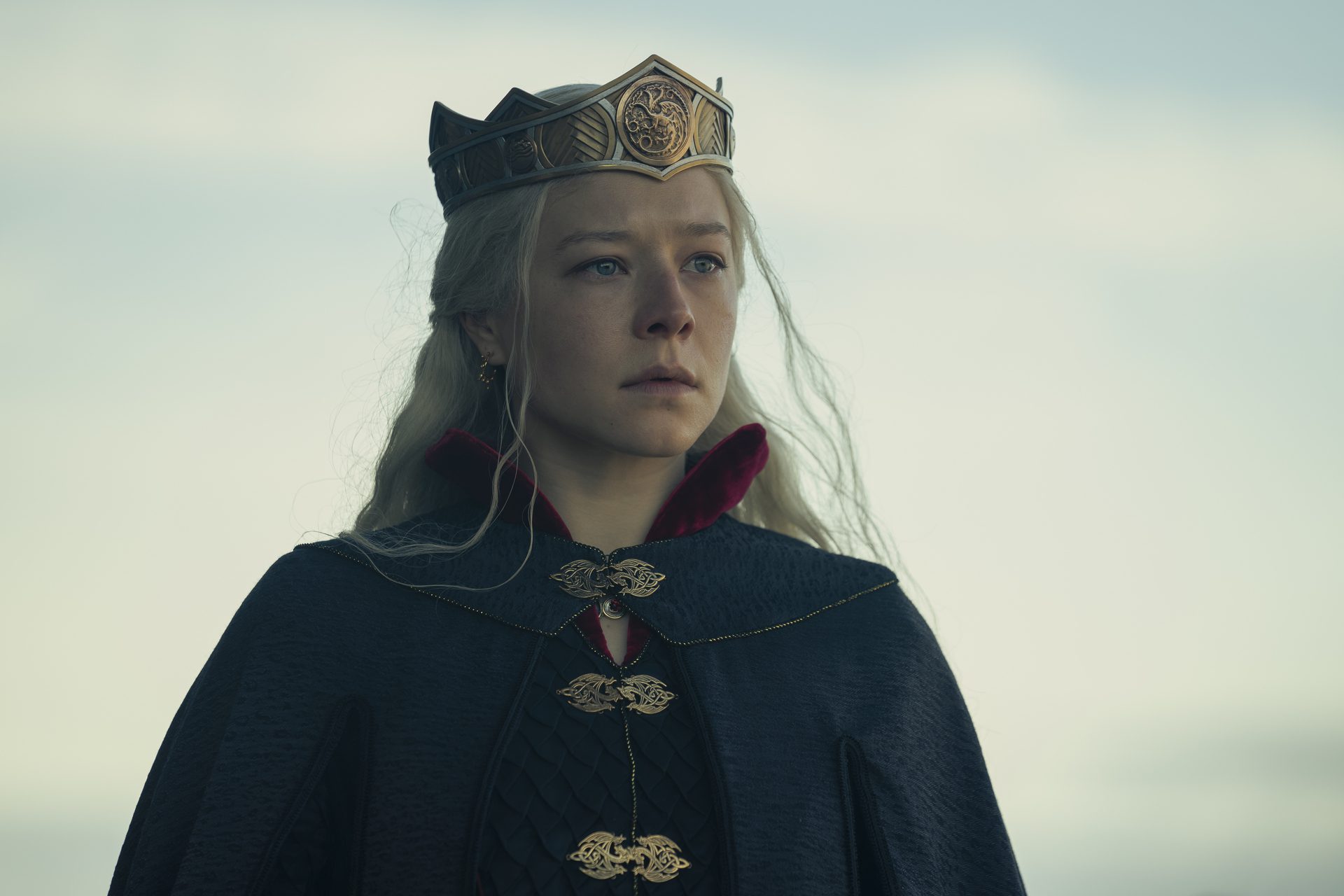 ‘House of the Dragon’ Season 1, Episode 10 Recap: “The Black Queen”


The Season 1 finale of House of the Dragon gives a look at the “blacks” side in the aftermath of King Viserys’ death and sets up the Dance of Dragons for Season 2.

While mourning a tragic loss, Rhaenyra tries to hold the realm together, and Daemon prepares for war.

The beginning of “The Black Queen” was difficult, with Rhaenys Targaryen arriving at Dragonstone and breaking the news to Rhaenyra and Daemon Targaryen that King Viserys has died and that the Hightowers usurped the Iron Throne by making Aegon Targaryen king. Daemon was seething, while Rhaenyra was incredibly distraught and lost her unborn baby Visenya shortly thereafter. At the funeral for Visenya, Erryk Cargyll arrived at Dragonstone and presented King Viserys’ crown to Rhaenyra, which was taken by Daemon and placed on his wife’s head by him. Daemon became the first person to bend the knee and call Rhaenyra “my queen”, which is a full circle moment for someone that was brooding at not being named heir in the first episode of the series. Everyone in attendance (aside from Rhaenys) also bent the knee, and Rhaenyra went from a terrible moment to perhaps the high of her life to this point; after years of thinking about her eventual succession and hearing much talk about how she should not be heir, it was a triumphant moment for Rhaenyra. The crowning of Rhaenyra was the top moment of the season finale, and it was reminiscent of both the funeral for Baelon Targaryen at the beginning of the season—and the Season 1 finale of Game of Thrones (“Fire and Blood”) where Jorah Mormont and the others bent the knee to Daenerys Targaryen and her three baby dragons.

The conversation between Rhaenys and a recovering Corlys Velaryon (whose demise was in fact exaggerated) gave great insight on what made Rhaenyra the MVP of the season finale. Corlys remembered Rhaenyra causing problems while growing up (and they still believe having a hand in the death of their son Laenor), but Rhaenys said, “that girl is holding the realm together at present.” While Daemon and others were calling for all-out war—including with the rogue prince immediately wanting to use dragons (the weapons of mass destruction in this world)—Rhaenyra’s goal was to keep the good of the realm in mind. When Otto Hightower arrived at Dragonstone with terms, Rhaenyra even said she’d think about it (due in part to her former close bond with Queen Alicent). Based on her initial moves and disposition as a queen, Rhaenyra is looking like a good and just ruler.

-However, while Rhaenyra handled herself very well, it looks like that might not last after the death of her son Lucerys at the hands of Aemond Targaryen and Vhagar. The final shot of “The Black Queen”, with Rhaenyra dressed in black, was a very memorable season-ender that gives insight into her changed mindset heading into Season 2.

-The split between Daemon and Rhaenyra—centering on how to handle the greens stealing the Iron Throne—is interesting. Again, Daemon was the first to crown Rhaenyra and appeared to truly respect her as queen, but his wrath is clearly still there when he doesn’t get his way. And “The Song of Ice and Fire” is something that Rhaenyra (rightly) strongly believes in, while Daemon—who was never told about it by Viserys—could not care less about it.

-Matt Smith and Emma D’Arcy starred in Episode 10 and were tremendous, but the acting from the entire cast was fantastic all season.

-Episode 9 focused on the “green” side of the Hightowers taking the Iron Throne, and Episode 10 was the complement to that, focusing on the “black” side led by Queen Rhaenyra. There was a definite contrast to each side, with the Hightower side playing dirty and acting stealthily—meanwhile, aside from Daemon’s tendencies showing, Rhaenyra’s side showed more of a positive “can-do” attitude with their approach. The Game of Thrones universe has a ton of gray area that leads to viewers rooting for just about anyone, but the blacks are objectively coming off as being closer to a “good” side after one season.

-Another interesting thing to note is how Daemon—while he didn’t listen to Jacaerys Velaryon giving commands—took his nephew/stepson under his wing in teaching in a little something about loyalty and the power of dragons.

-Daemon talked about the unclaimed dragons and their overall advantage even without them, but he went into the volcanic tunnels—while singing in High Valyrian—to attempt to claim Vermithor (“The Bronze Fury”). Vermithor was ridden by Jaehaerys and is the second largest dragon behind Vhagar. After locking eyes, it looks like Daemon might have successfully added Vermithor to his arsenal. HBO’s official guide and its Dragon Index help clarify the characters and connections in House of the Dragon.

-Borros Baratheon not only broke his father’s oath to Rhaenyra as heir, but he did it in such a manner that was disrespectful and selfish. The marriage alliance between his daughter Floris and Aemond Targaryen gives the greens a powerful ally as the Lord of Storm’s End. It was nice to hear the Starks mentioned, and it’s likely that they will not break their vow. And not only is Corlys doing OK, but it was revealed that he won the Stepstones, giving Rhaenyra a stronghold to help cut off supplies to King’s Landing.

-Overall, “The Black Queen” did a superb job of showing the importance of alliances, using the awesome table at Dragonstone to map out the situation. Another strong moment was when Corlys and Rhaenys pledged their loyalty to Rhaenyra.

-Instead of using slower ravens, Jace suggested he and Luke take their dragons to confirm the loyalty of families sworn to Rhaenyra. (The use of the classic Dany score from Game of Thrones with the three dragons flying from Dragonstone was awesome; all the connections to the original series throughout the season were enjoyable.) It was supposed to be a safe, diplomatic mission—and Rhaenyra warned them both not to fight, as they were to be messengers only. Ultimately, the presence of Vhagar and Aemond at Storm’s End made you realize something bad was going to happen. After demanding Luke’s eye under Borros’ roof, the Targaryen prince instead chased Luke and Arrax with Vhagar. The unintended consequences (as you could see by the look on Aemond’s face) led to the deaths of Luke and Arrax—and the unofficial start of the Dance of Dragons.

-I am trying to avoid spoilers from the source material for the most part (though Joffrey Baratheon made that a challenge), but I assume this is from George R.R. Martin’s Fire & Blood and is a great line:

“Then the storm broke, and the dragons danced.” #HOTDFinale pic.twitter.com/B0pNsc0PxS