Home / frontgames / ‘House of the Dragon’ Season 1, Episode 3 Recap: “Second of His Name” 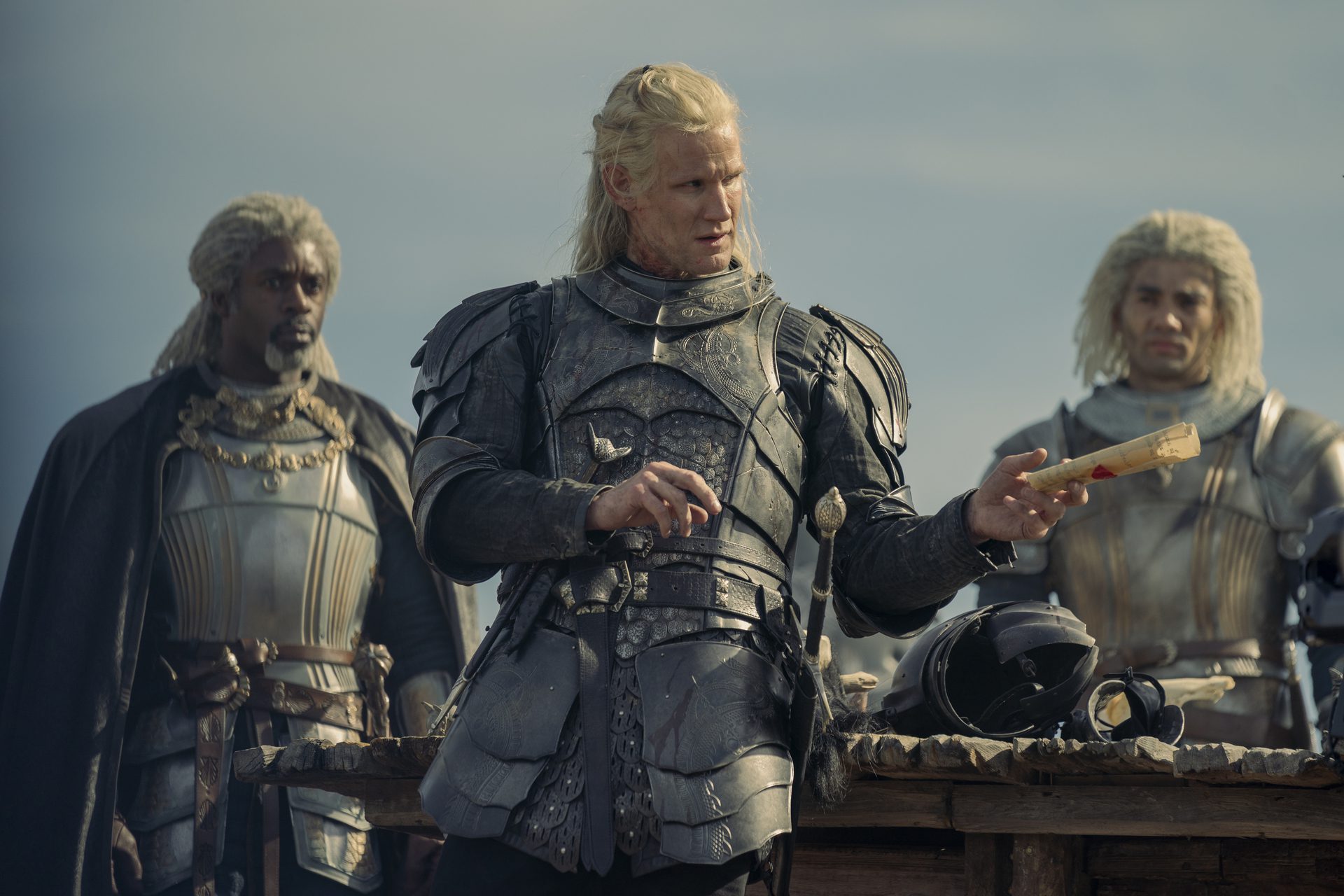 ‘House of the Dragon’ Season 1, Episode 3 Recap: “Second of His Name”


An even bigger time jump of three years took place between the second and third episodes of House of the Dragon, with the War for the Stepstones coming to its conclusion.

Episode: “Second of His Name”

Daemon and the Sea Snake battle the Crabfeeder. The realm celebrates Aegon’s second nameday. Rhaenyra faces the prospect of marriage.

Best Moment: War for the Stepstones

The prologue-feeling first scene of the episode included Daemon Targaryen on his dragon Caraxes assaulting the Stepstones before ultimately having to flee. The setup that the Crabfeeder and the Triarchy had allowed them to hide in the caves and avoid dragonfire, leading to a prolonged war that’s lasted a few years. With the men—mostly from House Velaryon—questioning Daemon’s leadership and King Viserys sending a royal letter to his brother promising aid of ten ships and 2,000 men, the rogue prince snapped, beating the messenger and deciding he would go on a daring mission to create an opening for his army to attack.

It felt unlikely that Daemon would actually surrender, and his use of the white flag as a ploy to draw out his enemies before cutting them down on the beach was a dirty trick showing that honor might not be that important to him—though it’s hard to follow honorable conventions when the enemy is feeding its captives alive to the crabs. The skill of Daemon was on full display, with his speed and strength helping buy enough time for his allies to join the battle while the opponent was drawn out of the caves. With dragonfire from above, the Velaryon forces were easily able to win the battle, which ended with Daemon chasing the Crabfeeer into a cave and coming out with half his body. The episode-ending shot of the bloodied Targaryen showed that he’s not the person to mess with.

“The road ahead is uncertain, but the end is clear.” – Otto Hightower

This one is a no doubter. Daemon needed a win—not just by winning the war but by showing that he can be a leader in Westeros. His fearless and dangerous attack on the Stepstones, ending with him killing the Crabfeeder himself, earns the second son a ton of credibility.

-The “Inside the Episode” discussed Episode 3 being about characters growing up and Viserys, Daemon, and Rhaenyra Targaryen in particular having more set perspectives after the events of the episode. Viserys admitted that he wavered, but he seems squarely behind his named heir Rhaenyra continuing as such and eventually sitting on the Iron Throne—at least for now.

-The episode gave a good look at what a king might have to deal with politically, which can certainly get tiring and annoying. Viserys drank a ton during the royal hunt, which was like King Robert Baratheon doing that (with the help of Lancel Lannister) before his death nearly 300 years later. I thought for a bit that a similar tragedy might strike Viserys.

-The scope of the royal hunt was on display in House of the Dragon, which George R.R. Martin was disappointed was unable to happen (because of budget constraints) during Season 1 of Game of Thrones. Aegon’s second nameday party and the royal hunt was a massive event with key houses like House Lannister showing up.

-It was a nice moment when Rhaenyra decided to let the white stag go. Killing the white stag probably would have been pretty legendary for the princess, but she decided to have mercy on the majestic creature—perhaps a sign of her good heart and her landing on the good side of the Targaryen coin flip.

-The dragonrider during the battle looked like Laenor Velaryon. While Targaryens are the ones with dragons, others from Valyria can also ride them.

-Daemon emerging from the battle with his face covered in blood was reminiscent of Jon Snow doing the same in the Battle of the Bastards. The insane fighting ability was also similar.