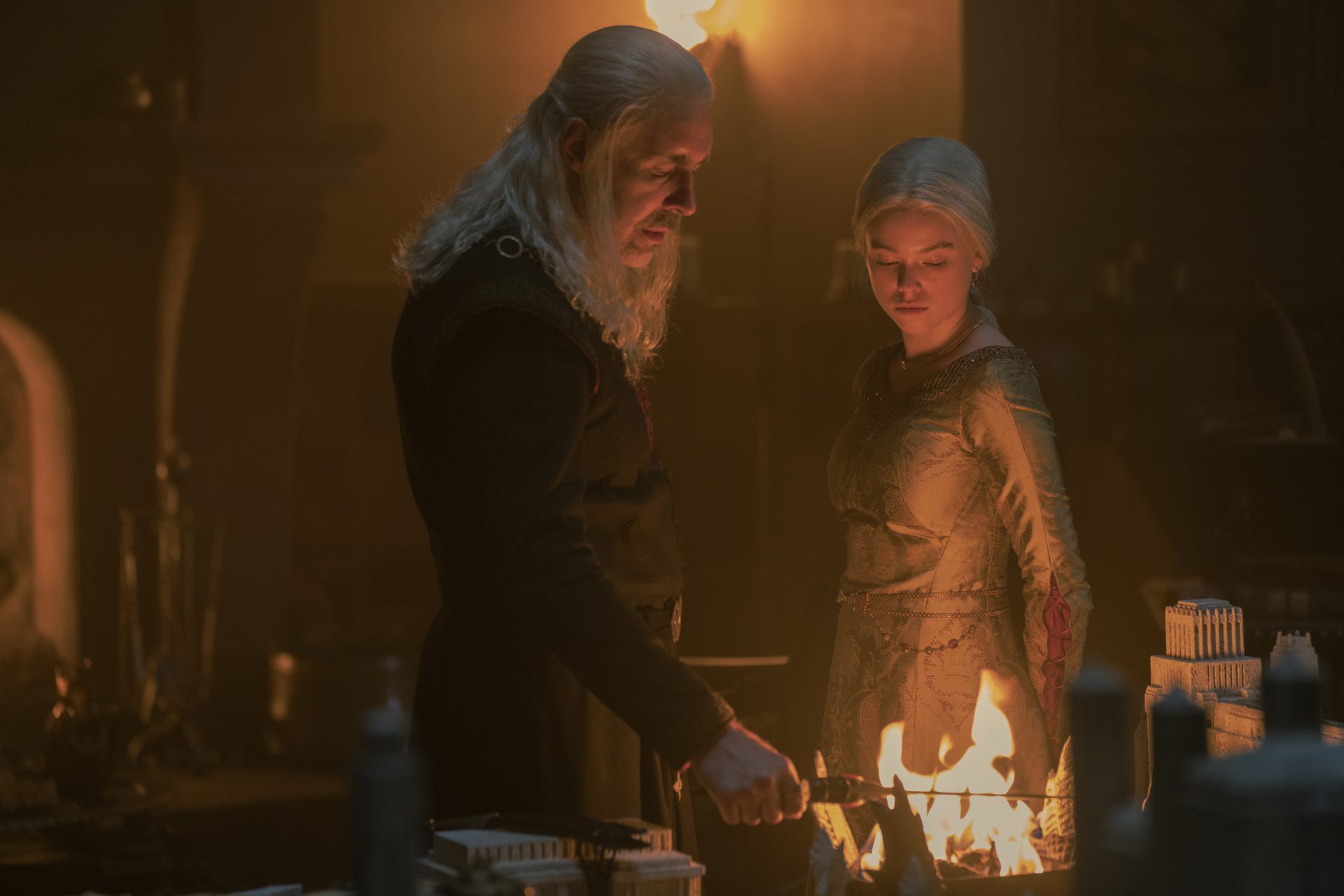 ‘House of the Dragon’ Season 1, Episode 4 Recap: “King of the Narrow Sea”

Episode: “King of the Narrow Sea”

After Rhaenyra cuts short her tour of Westeros, Daemon introduces the princess to the Street of Silk after dark.

Following Rhaenyra Targaryen ending her tour in search of a husband two months early, “King of the Narrow Sea” focused on the aftermath of her decision—with her uncle Daemon returning to King’s Landing at the same time, arriving on Caraxes. King Viserys’ accepting of his brother’s arrival in the Great Hall could have gone in just about any direction, as it started with Daemon wearing a crown as King of the Narrow Sea and getting the sword of Lord Commander of the Kingsguard Ser Harrold Westerling pointed at him. However, it became a calm affair, with Daemon giving up his crown and telling his brother to throw the Crabfeeder’s hammer in with the other swords of the Iron Throne. Viserys and Daemon then embraced, but the rogue prince had other plans that impacted the rest of the episode and future events in the soon-to-come civil war.

“You are my political headache.” – King Viserys to Rhaenyra Targaryen

We saw the “dragon” in Viserys come out when he confronted Daemon in the throne room for his actions with Rhaenyra, and the Targaryen king has shown he can be competent and strong when necessary. Another potential best moment from the episode was when Viserys fired his Hand of the King Otto Hightower after Rhaenyra made him do so as a condition for marrying Laenor Velaryon. Otto was clearly operating as a power-hungry schemer, and Rhaenyra helped her father see that after the Hand reported her activities with Daemon that were not fully true (saved by Daemon’s impotence). In the end, Viserys was able to get Rhaenyra to agree to the marriage to a needed ally, which is something he’d been lacking for a few years after turning down the marriage to Laena Velaryon. Now the question becomes whether Viserys is left unprotected after letting his Hand go, as Otto—who really might have the good of the realm in mind—appeared to do a solid job under multiple kings despite his recent selfish faults.

-While Daemon played nice with Viserys publicly, he quickly flipped the switch and tried to get to the King by getting to Rhaenyra—romantically, politically (even proposing a marriage between he and his niece to Viserys), and in terms of control. A big part of the episode and the journey Daemon took his niece on throughout the Street of Silk was basically the indoctrination of the young princess—and it appears Daemon was successful in doing so, as evident with Ser Criston Cole later that night. The possibility of marriage between Daemon and Rhaenyra looks like a realistic scenario and the potential best path for them if the Iron Throne is their primary concern and objective—and remember, Targaryens marrying each other is common. But it is noteworthy that Daemon does not and potentially cannot have any children—especially when talking to Rhaenyra about her duties as heir.

-There was another time jump from the end of the War for the Stepstones to the beginning of this episode, and it appears Rhaenyra has forgiven her best friend Alicent Hightower for marrying her father. This allowed Alicent to warn Rhaenyra that King Viserys was told about her and Daemon. When Queen Alicent questioned her friend, it was interesting that she made clear her disgust for the “queer customs” of her family when it comes to relationships.

-The sores on Viserys are getting much bigger, and they could eventually spell the end of him.

-Daemon’s new haircut helped make the time jump clearer, and we’ll see if there is any explanation or reasoning for him cutting his trademark Targaryen hair short.

-It was again nice to hear about the “Song of Ice and Fire” discussed while Viserys and Rhaenyra were looking at the Valyrian steel catspaw dagger. Viserys revealed that before the dagger belonged to Aegon the Conqueror, it belonged to Aenar Targaryen—but that it is “difficult to know” the owner of the dagger before then. Also, the way Viserys has been talking about The Prince That Was Promised (despite the potential gender-neutral translation as discussed with Daenerys in Game of Thrones) again makes it seem as though Jon Snow is The Prince That Was Promised; they might have had a better understanding of the prophecy around 200 years earlier.