Home / frontgames / ‘House of the Dragon’ Season 1, Episode 5 Recap: “We Light the Way” 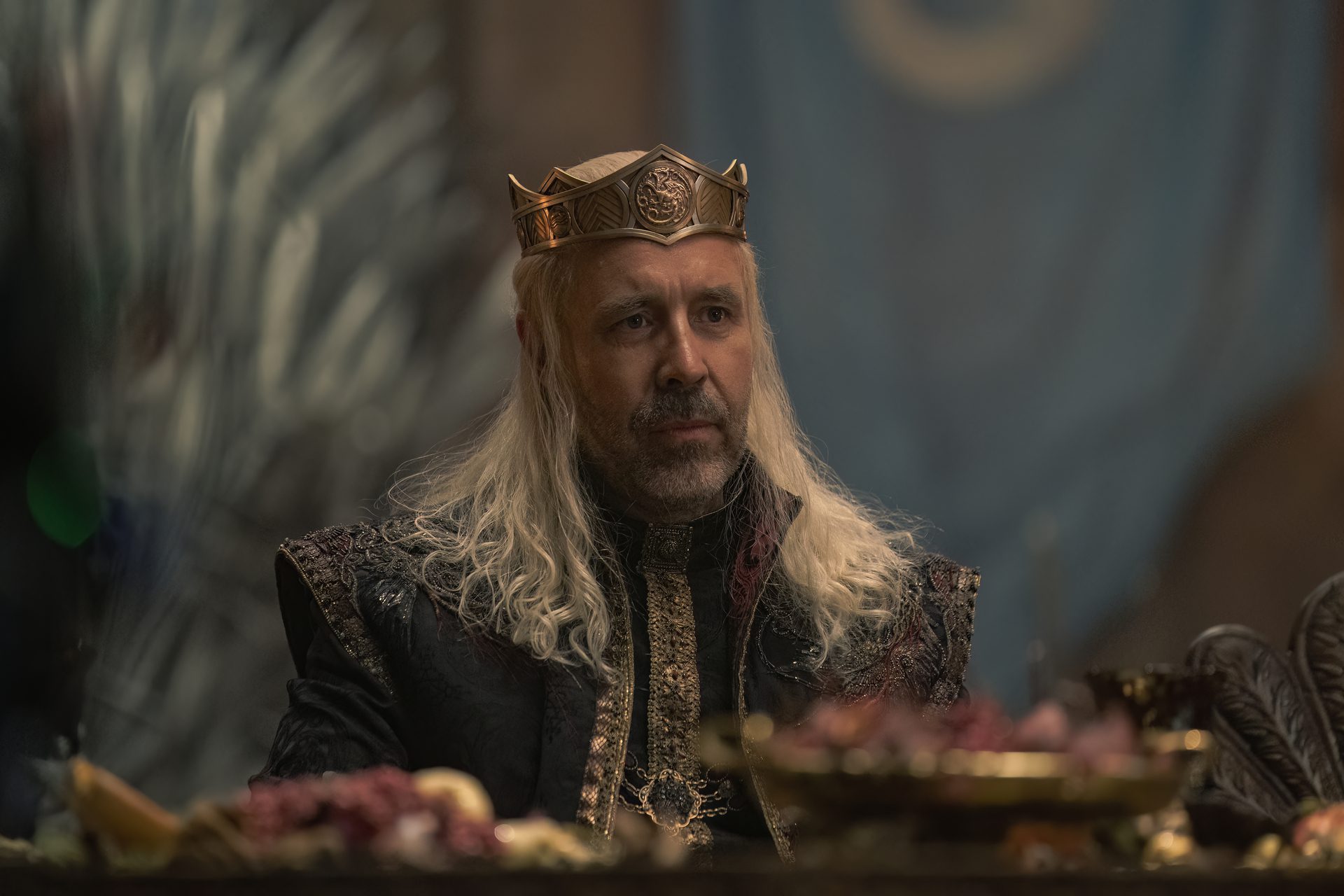 ‘House of the Dragon’ Season 1, Episode 5 Recap: “We Light the Way”


Season 1, Episode 5 of House of the Dragon, “We Light The Way”, included another unsurprisingly eventful wedding in the Game of Thrones world.

Episode: “We Light the Way”

Daemon visits his wife in the Vale. Viserys and Rhaenyra broker agreements with the Velaryons. Alicent seeks the truth about the princess.

We knew something big and game-changing had to happen in Episode 5, with the ten-year time jump coming next week. A wedding was the perfect setting to make that clear for viewers familiar with how they often go in Game of Thrones. The climax of the first-day festivities were the highlight of the episode and set up the big time jump that occurs between now and Episode 6. From the entrances of guests (and Queen Alicent) to King Viserys Targaryen getting sicker to key characters giving uneasy looks around the Great Hall, the tension was built throughout the evening—with Ser Criston Cole ultimately exploding and savagely beating Joffrey Lonmouth to death. Thanks to the horrible situation, King Viserys decided to forego the several days of planned celebration and to quietly wed his daughter Rhaneyra and Laenor Velaryon to forge the important political alliance—while at the same time the Queen stopped Criston Cole from killing himself. “We Light the Way” ends with a weakened King Viserys fainting right after the marriage.

“The time is coming, Alicent. Either you prepare Aegon to rule, or you cleave to Rhaenyra and pray for her mercy.” – Otto Hightower to Alicent Hightower

It’s difficult to pick an MVP from “We Light the Way” because no one really won, but Queen Alicent might have quietly laid the foundation to help herself down the road. By showing mercy to Criston Cole after he confessed his sin of breaking his vow, she should have his loyalty to some extent. And then after she apparently stopped him from killing himself in shame at the end of the episode, he should be further in her debt—and a potential person to manipulate in the game of thrones. Also, the Queen showed her strength more than she previously had in her entrance to the Great Hall, wearing a green (the color the beacon on the Hightower glows when Oldtown calls its banners to war) dress that subtly voices her thoughts on the dismissal of her father and the marriage between the current heir and Laenor.

-Daemon Targaryen gets more interesting by the episode. Episode 5 started with him meeting with his estranged wife Rhea Royce, who suffers an “accident” that ends with Daemon finishing her off with a brick. Then Daemon’s arrival and actions left the viewer wondering what he was thinking; while most others around him were uneasy throughout the banquet, he looked carefree and in complete control. He even again tried to woo his niece Princess Rhaenyra before her marriage, making his case in High Valyrian. Some weren’t happy with the Matt Smith casting, but he’s putting in the type of performance that makes it difficult to envision anyone else playing the role—of which there were so many of in the original Game of Thrones series.

-The Velaryons have essentially been in quiet rebellion against the Crown, but their reception of King Viserys was pretty ridiculous and surprising. Normally, the King would have the red carpet rolled out for him. Viserys later asked his Hand Lyonel Strong what type of king he would be remembered as; clearly, he is not one that commands unquestioned respect.

-When Criston Cole basically spilled his heart to Rhaenyra on the ride back from Driftmark, the cold side of Rhaenyra was on display. Given how Targaryens can be, it’s something to note.

-Sticking with Ser Criston, his sense of honor—despite his lapse in judgement one night with Rhaenyra—was a bit reminiscent of Jon Snow in Game of Thrones. That made it more shocking that he snapped and was the one to cause the chaos. Presumably, Cole thought that Ser Joffrey could put Rhaenyra in danger by knowing the secret and talking so openly about it to him. Cole’s suppressed anger came out and cut off a loose end in the process.

-Laenor did not at all look like he wanted to get married after Joffrey Lonmouth was killed. It will be interesting to see how this marriage will work between Rhaenyra and Laenor—and whether Laenor’s secret of being gay comes into play, as his mother Rhaenys fears.

-The banquet scene was very well done in tracking key characters and their perspectives, making the entrances impactful, and displaying the chaos of the climax when it was unclear what was going on. Game of Thrones had a similar scene with the Purple Wedding in terms of tracking many important characters in one place and seeing how they would react.

-The ending score by composer Ramin Djawadi was again great. House of the Dragon is fortunate that he is helping keep the same mood and feeling via music.