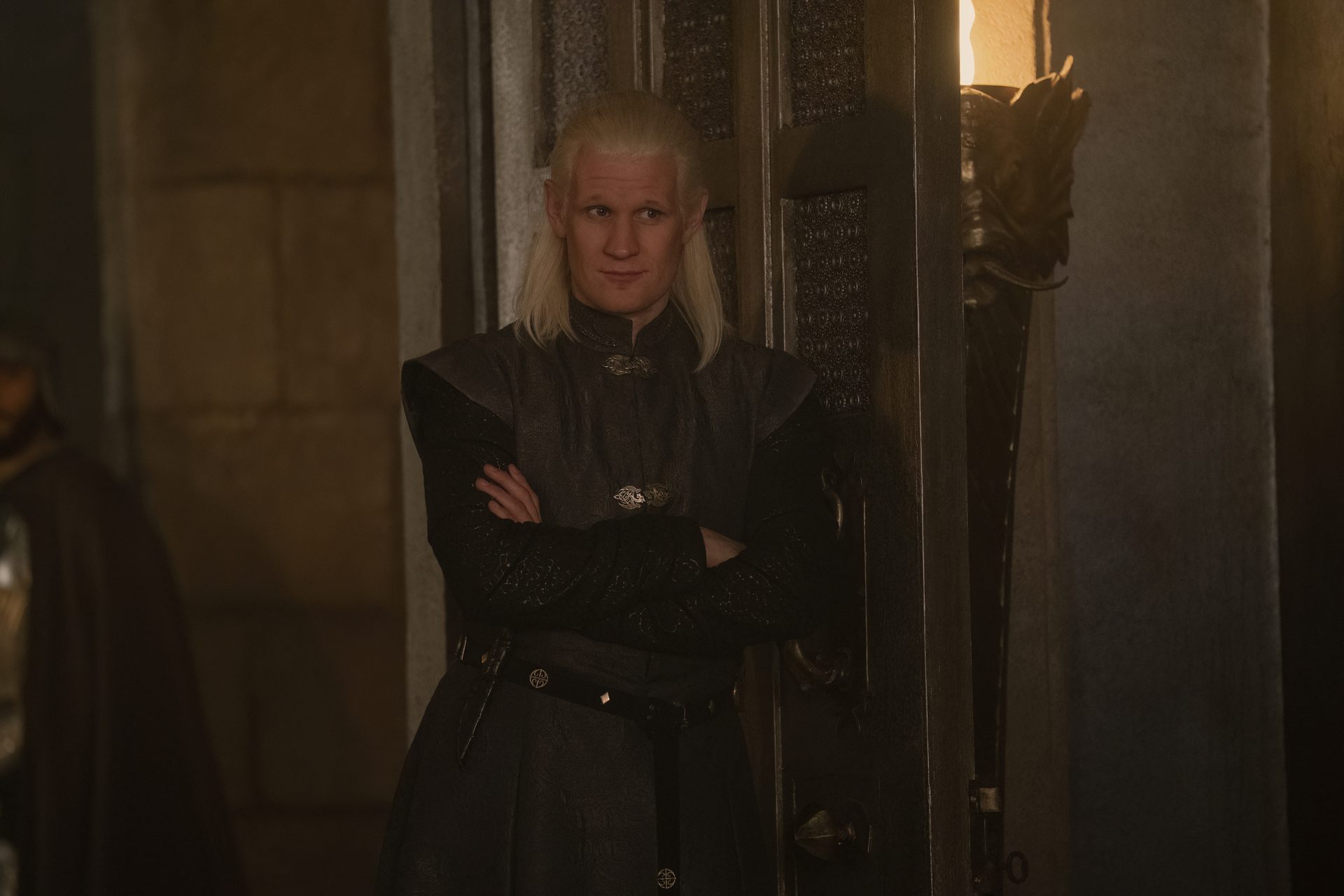 
The seventh episode of House of the Dragon might have been the best yet, with an eventful hour further lining up the sides in the coming Targaryen civil war.

As the families gather on Driftmark for a funeral, Viserys calls for an end to infighting and Alicent demands justice.

“Driftmark” was an awesome and memorable episode from start to finish, so a few moments could have been the choice here. But the final scene of the episode—with Daemon and Rhaenyra Targaryen getting married while staging the death of Laenor Velaryon, who ultimately is revealed to have escaped with his paramour Qarl Correy—is the choice for best moment. The death of the only remaining child of Corlys Velaryon and Rhaenys Targaryen appeared to be another highly tragic moment in the Game of Thrones story, so the final reveal of Laenor alive and well with a shaved head was the type of chills-delivering twist that Thrones has become so known for over the years.

“History does not remember blood. It remembers names.” – Corlys Velaryon

-Man at Driftmark (passed off as Laenor Velaryon)

This certainly could have gone to Aemond Targaryen, who was daringly able to claim Vhagar to give himself a dragon (and power) after the funeral of Laena Velaryon—admitting that his loss of an eye was well worth it to obtain a dragon. Daemon is also a strong MVP choice, as he has had his eye on his niece for quite a while. However, the Targaryen marriage was the biggest win for Rhaenyra, as it strengthens her claim to the Iron Throne when King Viserys dies. It felt like only a matter of time before Daemon and Rhaenyra got together somehow, and now they are both squarely allied together. Also, Rhaenyra stood strong in the face of (true) accusations about her children, and she made Queen Alicent look bad during the tense situation following the aftermath of the violent scuffle between the kids.

-Aemond claiming Vhagar could have been the top moment from the episode, and the use of the Targaryen score from composer Ramin Djawadi was excellent as usual. And then it was quite the twist to have Aemond quickly turn into a bit of a villain in arrogantly confronting his four relatives about it; it speaks to how much grey area there is with all these characters in this world.

-In the aftermath of Aemond losing his eye and Queen Alicent demanding justice, it was finally spoken plainly and publicly in front of everyone that Princess Rhaenyra’s children are bastards. King Viserys was still hearing none of it and will come down hard on anyone that speaks of it again. The entire confrontation with the climax of Alicent charging Rhaenyra with the catspaw dagger was typical Game of Thrones, with some similarity to the Season 1 scene from the opening season where Ned Stark, Cersei Lannister, and the others were arguing over what to do about Arya’s direwolf Nymeria attacking Prince Joffrey.

-The opening funeral scene was also tremendous in capturing the uneasiness everyone felt toward each other—for various reasons. Daemon’s sudden laugh was interesting and speaks to his unpredictability.

-It was heart wrenching to see Rhaenys react to her son’s supposed death just days after losing her daughter. Pretty unfortunate and messed up that Laenor couldn’t tell his parents before he left, though perhaps he thought they would not let him leave—and maybe he’ll get word to them when he arrives to his destination (though the only way the marriage between Daemon and Rhaenyra works is if Laenor is “dead”).

-Otto Hightower is back as Hand of the King, and it looks like he has a major role to play based on the preview for next week’s episode. Otto takes strong involvement with his grandchildren, reprimanding Aegon Targaryen for behaving like a drunk—and he’s quite proud of Aemond’s mindset on losing his eye but getting a dragon.

-Corlys is no doubt ambitious, as his talk with Rhaenys unveiled, but overall has behaved like one of the good guys through seven episodes. It’s obvious that Laenor’s supposed children are not really his own, but Corlys still treats them as if they were his own blood.

-Episode 7 of House of the Dragon also had some parallels to Episode 7 of Game of Thrones. The catspaw dagger was featured prominently in both episodes, and there was a twist ending in the final seconds (Littlefinger turning on Ned; Laenor turning out to be alive).

-We’ll see how the Velaryons figure into things (likely going to the side of former son-in-law Daemon and their grandchildren), but the sides appear pretty clear ahead of a “hot” war stemming from this current “cold” war. The “greens” are Queen Alicent and her allies, while the “blacks” are led by Rhaenyra and Daemon.

-The scenes in middle of the night were extremely dark—I’d imagine many people had trouble seeing them (fortunately I have an LG OLED—which was still difficult to see these night scenes on—to watch on and highly recommend them). I liked it, as things really are difficult to see at night, and it made the light brought by Vhagar’s fire breath more impactful. The great Miguel Sapochnik (“The Long Night”) directed this episode, and clearly he’s in the camp that wants to film what looks truest and best for the show and did not listen to the critics during Game of Thrones.