Home / frontgames / ‘House of the Dragon’ Season 1, Episode 8 Recap: “The Lord of the Tides” 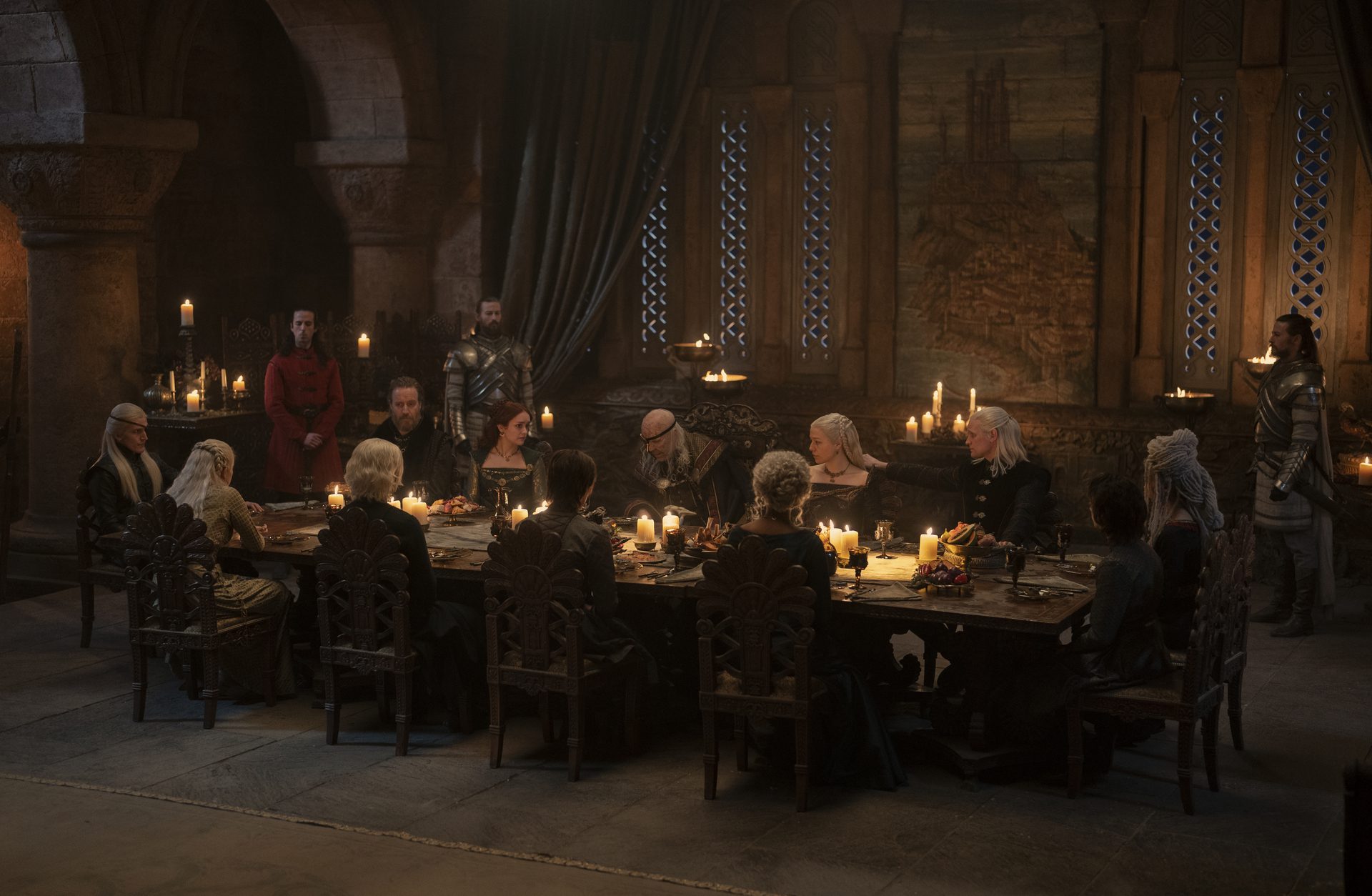 ‘House of the Dragon’ Season 1, Episode 8 Recap: “The Lord of the Tides”


House of the Dragon delivered another sensational episode during its first season while continuing to establish itself as perhaps the best drama currently on television.

Episode: “The Lord of the Tides”

As Hand of the King, Otto Hightower was representing the crown in the throne room for the hearing of the claim over the Driftmark throne (with Corlys Velaryon suffering an injury that may lead to his death or make him unable to command). It appeared certain that Vaemond Velaryon would be granted claim over his ancestral home given that everyone knew Lucerys Velaryon was not a true-born son of Laenor Velaryon and that strength was needed with another war breaking out in the Stepstones. Earlier in the day, King Viserys Targaryen declined milk of the poppy—claiming to not want it for a dinner he called with his family—to keep his mind right despite the agonizing pain. Viserys’ surprising appearance in the throne room caught everyone by surprise, including most notably Otto and Vaemond. The king was in a very weakened state while near death, but he showed major drive and strength in working his way up to the Iron Throne—with the help of his brother Daemon near the top—to preside over the debate.

As Viserys said previously, he was no hero in battle and was somewhat of an uneventful king; but he showed major kingly status one last time in his arrival at the Great Hall. Then he truly appeared to bring his family together during the dinner he called in the Red Keep, giving a tremendous speech that got Princess Rhaenyra Targaryen and Queen Alicent Hightower to come together and speak nicely of one another after years of coldness and hostility. Though he was not emphatic enough about it, King Viserys continued to defend his daughter and heir Rhaenyra and her claim to the Iron Throne in his final days. He did his best to keep the family together in the end, and it looks like he would have done so if not for an uncontrollable lapse when he believed he was speaking to Rhaenyra and not Alicent on his deathbed, leading Alicent to believe Aegon is to be king. Ultimately, Viserys kept the song of ice and fire prophesy going, and we know that from Game of Thrones it works out in that regard. The seeds of civil war were blooming during his reign, but Viserys oversaw a mostly peaceful time in the realm and was a good king if not a perfect or legendary one.

-The six-year time jump led to more big changes. Most notably, the crown is basically run by the Hightowers at this point given King Viserys’ health. The changes include a more muted King’s Landing, with the Faith of the Seven religion taking a more prominent place—including in the architecture—instead of the fire and blood of the Targaryens.

-Queen Alicent is giving off some Cersei Lannister vibes, and the costuming was pretty direct with that in this week’s episode, with Alicent’s attire looking very similar to Cersei’s when she became queen. Alicent has a coldness to her, but she did show mercy to Dyana, who was apparently taken advantage of by Aegon, when she easily could have had her killed for the trouble.

-Daemon Targaryen was a little too quiet through “The Lord of the Tides”, so his sudden top-half-of-the-head-beheading of Vaemond Velaryon (after his challenge of “say it”) was even more shocking. Then in typical Daemon fashion, he gave a witty response stating that Vaemond could keep his tongue.

-When Rhaenys Targaryen was called by her cousin to speak on her husband Corlys’ will, she told the truth while bettering the status of her house and family name by accepting Rhaenyra’s marriage proposal for her children—which is exactly what Corlys would have wanted. Rhaenys displayed earlier in the episode that she did not want to work with Rhaenyra (believing she and Daemon had her son Laenor killed), but the princess spoke truly about her husband’s will. I wonder what Rhaenys was thinking while watching Vaemond’s body get cleansed—perhaps that it would be different if she spoke the truth on the other end of the spectrum, knowing that Jace and Luke are not really her grandchildren by blood.

-Aemond Targaryen has quickly become a fantastic villain—and he’s quite powerful, too. Criston Cole is a great fighter that already beat Daemon in one-on-one combat, but he was not match for Aemond, who he has been training for years. When Vaemond resumed the hostilities between the grandchildren after King Viserys left the room, I thought there might be a duel when Daemon stepped up to end the scuffle—perhaps that’s something to come in the civil war. Meanwhile, Aegon is obviously still not living up to his namesake as a careless drunk—so that makes it even more concerning that Alicent is now apparently going to push for him to be king.

-The mysterious Mysaria figures to be a major wild-card moving forward after it was revealed that Queen Alicent’s lady-in-waiting Talya is working for her, especially because Mysaria is a former associate/lover of Daemon.

-The makeup and prosthetics, as you would expect, did an amazing job with the look for King Viserys, who looked halfway to death because of his illness. The golden mask was a regal appearance for the Targaryen, but the loss of his eye and the serious damage to the right side of his face was eerie and hard-hitting. Throughout “The Lord of the Tides” there was a bit of a spooky and dark feeling to it, and it was fitting that this episode aired in October.

-The rumor is that the Sea Snake might have lost his mind due to an injury in the resurgence of the war in the Stepstones—leading to many of the events in this episode. But it wouldn’t be shocking if the great explorer and richest man in Westeros defied the rumors and turns out to be OK.

-Regarding those dragon eggs from Syrax, are they eventually the petrified dragon eggs gifted from Illyrio Mopatis to Daenerys Targaryen: Drogon, Viserion, and Rhaegal?

-Paddy Considine was extraordinary as King Viserys during his eight-episode run. George R.R. Martin even texted Considine: “Your Viserys is better than my Viserys.” Pretty cool, and an Emmy should be headed Considine’s way for his role.