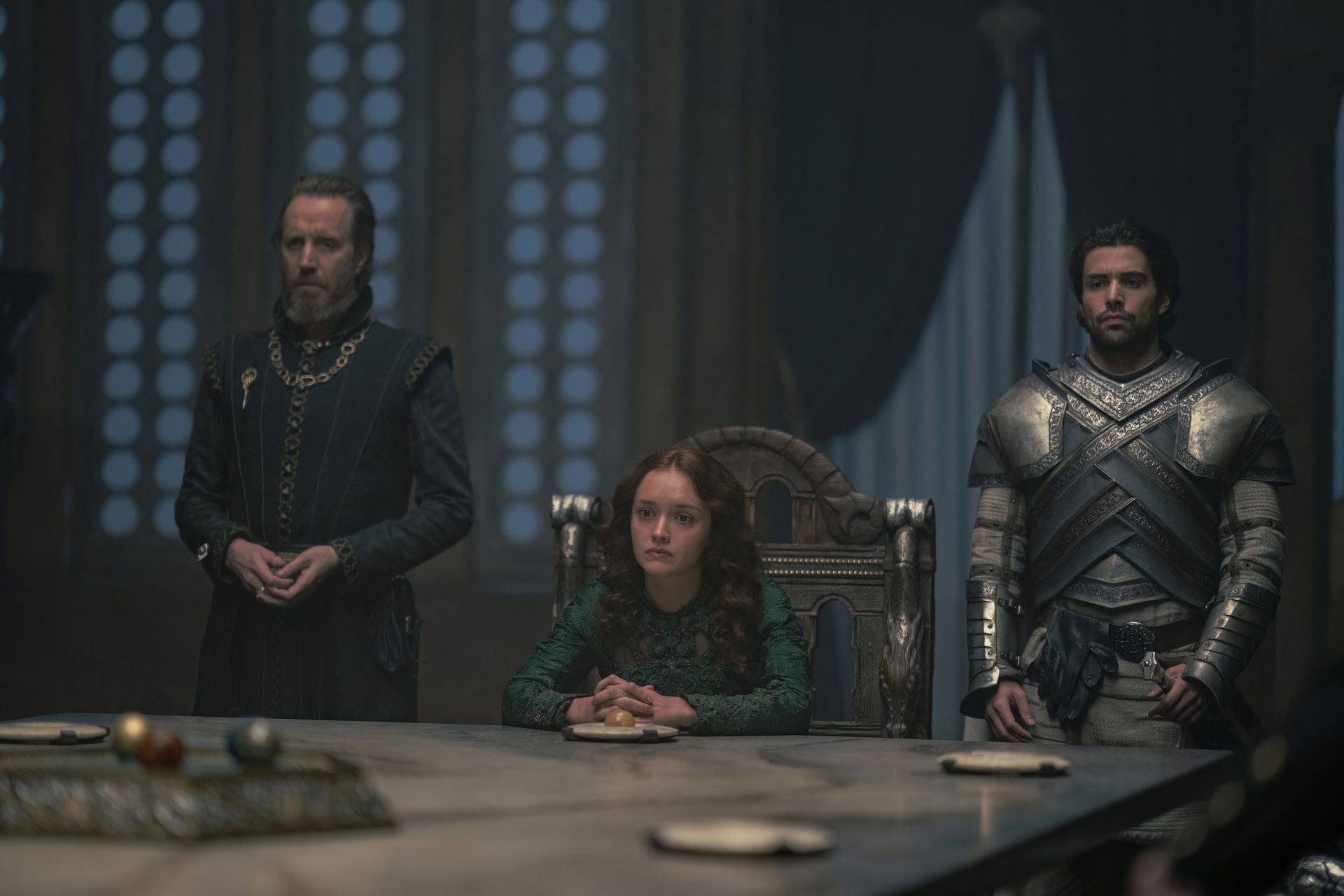 ‘House of the Dragon’ Season 1, Episode 9 Recap: “The Green Council”


The penultimate episode of the first season of House of the Dragon delivered a thriller.

While Alicent enlists Cole and Aemond to track down Aegon, Otto gathers the great houses of Westeros to affirm their allegiance.

The tense “green council” meeting was also great, but the top moment from the episode was probably Aegon Targaryen’s coronation—which was done without the named heir Rhaenyra Targaryen even knowing her father was dead. Aegon was basically a no-good drunk up to this point, and he seemingly really did not want to be king—he even looked somewhat dead inside while marching up to be crowned. But you could see a switch in his demeanor when he was crowned with Aegon the Conqueror’s crown and given his sword Blackfyre along with the catspaw dagger. However, that triumphant moment turned quickly when—in typical Game of Thrones fashion for a penultimate episode of a season—Rhaenys Targaryen arrived on her she-dragon Meleys (“The Red Queen”) to blow things up. It seemed unlikely she’d take Aegon, Alicent and Otto Hightower, and the others out (the viewer knowing that a civil war is coming), but it looked like Meleys was going to light them all on fire right then and there; it was ultimately a screech that acted as a warning and a show of strength ahead of Rhaenys going to Dragonstone to warn Rhaenyra’s party.

“Have you never imagined yourself on the Iron Throne?” – Rhaenys Targaryen to Alicent Hightower

Rhaenys was immediately made a prisoner upon the king dying, as the Hightowers essentially locked everything down to form a successful coup to install Aegon as king. The Queen Who Never Was played the conversation with Alicent well, and her eventually escaping to get Meleys (initially with the help of Erryk, who just wanted to get her out of King’s Landing as soon as possible—so without her dragon) is a major victory that will undermine the green’s plan to assassinate their adversaries.

-The small council meeting after King Viserys’ death—which included Criston Cole shockingly and accidentally killing Lyman Beesbury by slamming his head into the stone ball on the table—felt realistic to how a usurpation might really go. Queen Alicent was left in the dark for years about most of the council’s plan to install Aegon as king upon Viserys’ death, and then the debate came to what to do as the named heir Rhaenyra Targaryen and her family—with Alicent wanting mercy while Otto and the others in on the plot wanting an assassination. This moment showed that Otto is clearly a power-hungry force, while Alicent isn’t at that level. Alicent was obviously conflicted about the entire situation, despite her insistence that Viserys’ last wish was to have Aegon as king.

-Lord Commander Harold Westerling showed his honor in refusing to carry out the murders at the order of Otto. Remember, Westerling was Princess Rhaenyra’s sworn protector, so that certainly played a role. But it seemed like something Westerling refused mostly out of principle.

-Otto continued to show that he is totally ruthless when rounding up some of the lords of Westeros that were in King’s Landing and making them bend the knee to Aegon as the new heir (in this instance in the Great Hall, to Otto himself, which is interesting). Anyone that did not follow orders was given the King’s Justice. Otto is quickly becoming an awesome villain type of character.

-The centerpiece of the episode was the search for Aegon, with both Alicent (Criston Cole and Aemond) and Otto (Arryk and Erryk Cargyll) being sent to search for the prince. Cole almost seems like a robot at this point, programmed to do whatever Queen Alicent asks.

-The search for Aegon also gave more insight into the way he is—and it’s not good. There is obviously a cruelness to Aegon, who didn’t want the Iron Throne at first. Given Aegon’s propensity for meanness, it’s a bit scary to think about how he’ll be a ruler. Meanwhile, Aemond keeps his emotions internal, but he believes that Aegon will not be a good king and that he himself would be better suited for the crown.

-Mysaria, the former close associate of Daemon Targaryen, apparently had Aegon under her thumb to some extent. She presented herself as a for-the-people type of force in her negotiation with Otto, potentially shedding some light on what has been a mysterious character.

-Larys Strong always gave uneasy feelings, but it’s been revealed that he’s basically a complete creep. Strong is arguably the most unlikeable character at this point because we don’t even know what he tangibly wants. He can be a valuable resource politically, but I still wonder why Alicent puts up with him when she probably could’ve had him killed at any moment in the past several years.

-The installation of the new king very quickly after the king’s death was very similar to Season 1 of Game of Thrones, but this time it happened on a much larger scale. In a show of power and legitimacy, Otto wanted to force the people of King’s Landing to see Aegon as their king.

-Rhaenys arriving on Meleys was epic, but she unfortunately killed hundreds if not thousands of people in the process. That part was a big surprising, although the citizens being rounded up like cattle shows what those in power think of them. And as Rhaenyra said before, people say that “Targaryens are closer to gods than to men”. The opposing powers might not care about peasant casualties during the coming civil war.

-The opening score of the episode was an instant classic, and it help set the mood of the aftermath of the death of King Viserys.