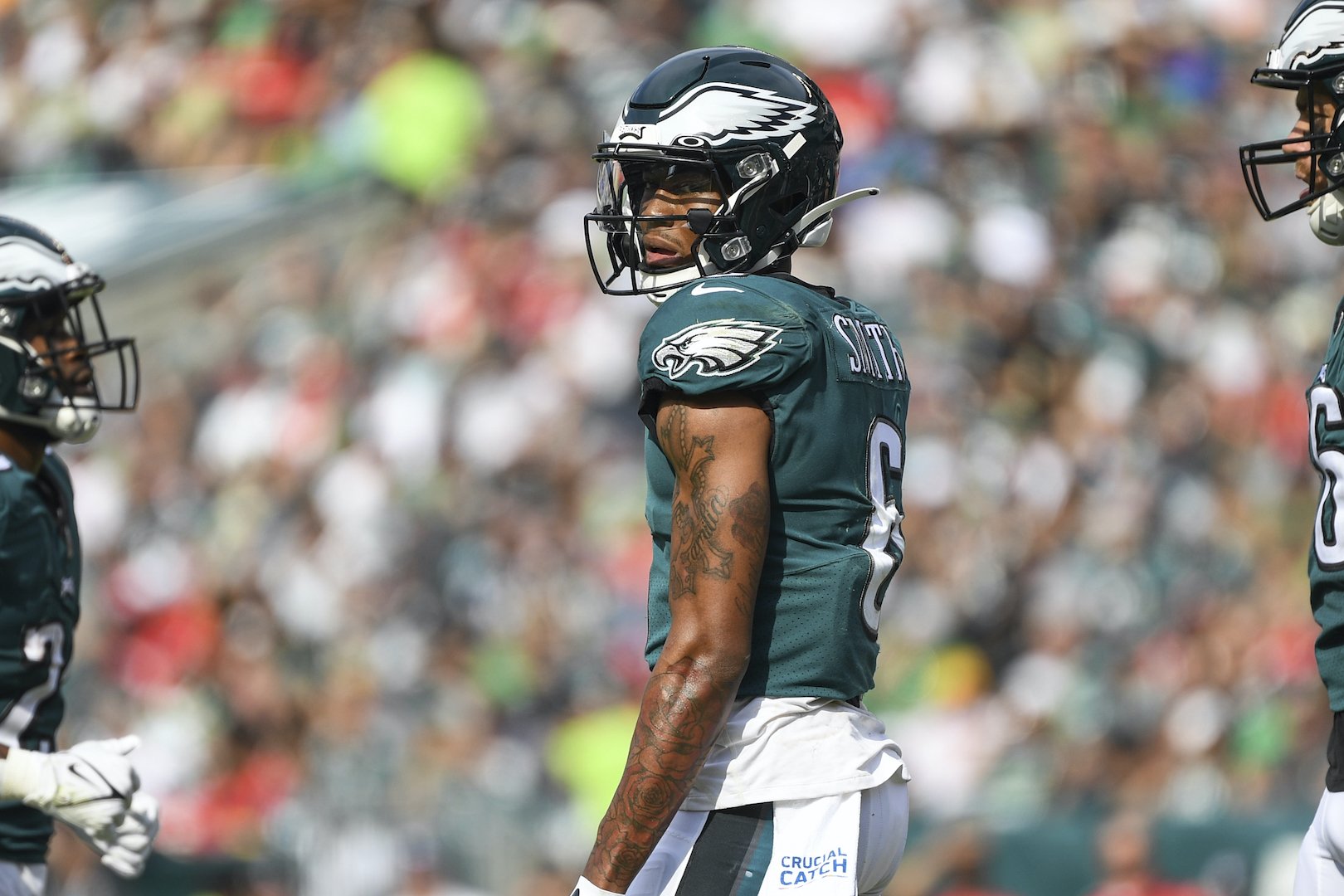 
We are at the halfway point in the 2022 NFL season, and the top half of the league appears to be separating itself in what’s been a parity-filled campaign—but things can certainly change over the coming weeks if teams with high preseason hopes like the Packers and Rams can go on a run.

There’s now been a little bit of chatter that the Eagles have been fortunate with their schedule, but the bottom line is they are taking care of business every week during such a competitive season. A.J. Brown, Dallas Goedert, and the run game have been great, and Philadelphia can still get DeVonta Smith going more consistently. The one potential weak spot right now is the run defense with Jordan Davis out with a high-ankle sprain.

We’re all hoping for the best for Josh Allen, who is dealing with an elbow injury that doesn’t sound good. Allen being just a bit off again last week was arguably the difference in the loss to the Jets, but I expect he’ll get fully back on track soon if he’s healthy.

The Chiefs were in a battle on Sunday Night Football, ultimately coming through against the Titans in a game in which Patrick Mahomes totaled over 500 yards (446 yards passing on 68 attempts) but only led the offense to 20 points including overtime. It was a weird one, but it’s a positive for Kansas City to come through in games like that.

The Cowboys had the bye and should be healthier, including running back Ezekiel Elliott (knee) and superstar defender Micah Parsons, who was banged up throughout the first half. Dallas and head coach Mike McCarthy head to Lambeau Field to face a reeling Packers squad.

It’s now starting to catch on how this quietly superb start to the season for the Vikings has gone under the radar—they’re 7-1, with their lone loss coming to the Eagles. A strong fourth-quarter effort keyed the road win at Washington, and now Minnesota sees a trip to Buffalo as an opportunity to show they are legit.

Lamar Jackson and the Ravens offense were mostly in control all night at New Orleans, and Jackson now moves to 14-1 against the NFC in his career. Defensively, linebacker Roquan Smith looks like a natural fit in the middle after he was acquired from the Bears.

Led by the unstoppable Derrick Henry and an incredibly tough defense, the Titans nearly pulled off the upset with rookie quarterback Malik Willis—who is showing some promising signs despite the lack of passing numbers—at Arrowhead. Henry shaking the hands of his defensive teammates after the loss is yet another sign of how tight this group is:

Kyle Shanahan had the bye week to scheme more interesting stuff for Christian McCaffrey, and the Niners will hopefully get Deebo Samuel (hamstring) back after he missed the Rams win.

I considered moving the Seahawks up a couple more spots in this week’s power rankings, but they stay steady at No. 9 for now. The offense remains very balanced, and the emerging defense again had a strong outing despite playing on the road within the division.

Running back Jeff Wilson Jr. was a natural fit in Miami’s offense, instantly taking the lead in the backfield and scoring a touchdown in his team debut—he’ll add another element on offense along with all their speed. The Miami defense must tighten things up when facing Nick Chub and the Browns this Sunday.

I’m looking for Saquon Barkley to come out of the bye week charged up and taking over games, with home matchups against the Texans and Lions before a Thanksgiving showdown with the Cowboys.

Joe Mixon scored five touchdowns and had fantasy football owners rejoicing with an all-time great performance on Sunday. But more importantly, the day was a sign of the Bengals’ upside if they can get Mixon and the run game going behind this revamped offensive line. The Bengals have made it clear that’s the style they want to play, with a potent rushing attack that opens things up for the passing game.

You could see the relief on Tom Brady’s face after leading another epic game-winning touchdown drive in 35 seconds to lift the Bucs over the Rams. The much-criticized Devin White and the defense deserve a ton of credit too, not allowing much at all aside from the long touchdown to Cooper Kupp.

The Patriots defense had nine sacks and a pick-six in an overwhelming victory over the Colts, and I’m anxious to see how the offense adjusts to perhaps become more explosive in the passing game during the bye week.

The Jets could move back closer to the top ten after a massive bounce back win versus the Bills, but I just had a tough time moving them over teams like the Bengals, Bucs (with Tom Brady at quarterback, despite their issues), and Patriots (who just handled the Jets at home). Still, the win for New York should not be discounted, and that includes the job Zach Wilson did taking care of the football and the defense doing a tremendous job against Buffalo’s offense.

The Chargers had some things bounce their way and come off the bye with a win against the Falcons, but the few teams ahead of them can be trusted more right now to me. That said, the LA defense did step up, including Khalil Mack’s big strip fumble with Atlanta driving.

Again, some things didn’t bounce the Falcons’ way, most notably the fumble recovery that was then fumbled with under a minute remaining of their loss by a field goal. A positive is that Atlanta needs to just put that behind them and prepare for Thursday Night Football versus the Panthers.

Aaron Rodgers was not happy with his own play—but also with the play of his receivers, and the television caught an interesting choice of words by Rodgers on a pass he thought should’ve been caught by his teammate. Green Bay needs something to snap them out of this funk, and we’ll see if a matchup with the Cowboys—given the battles between the two franchises over the years and Rodgers’ success in the series—can do the trick.

Things are reaching a bad spot with the Rams, as evident by All-Pro cornerback Jalen Ramsey playing the blame game and basically calling out his offense and coaches for making them try to stop the Bucs offense again in their loss. It’s just tough to win with the way the offensive line is playing, which is what led to Los Angeles parting ways with Jared Goff a couple of years ago.

The Commanders couldn’t keep their winning streak going, but they again played tough—particularly up front on defense—and nearly took down a one-loss Vikings team. This Monday night at Philadelphia will be another major challenge, but I’m interested to see if Washington can move the ball on the ground with Brian Robinson and Antonio Gibson.

It feels like a while since the Broncos played in London and got the close win, and they figure to immediately be in a very tough game at Tennessee this Sunday.

Nick Chubb is now 29 yards behind Derrick Henry for the rushing title, but it was cool to hear that Henry (as relayed by Mike Tirico) said Chubb was the best running back in the league. Cleveland will be relying on Chubb to keep them in contention ahead of the final stretch.

Justin Fields set the NFL record for most rushing yards in a regular season game by a quarterback (178), and it’s that rushing ability as one of the best athletes on the field at any time that will help Fields play freer as a passer too. I expect more damage from Fields as a runner when the Bears host the Lions this week.

Trevor Lawrence really needed a bounce back effort, and he delivered in a comeback win over the Raiders. Dawuane Smoot (two sacks) and the defense also stepped up, and we’ll see how young Jacksonville fares with two tough matchups at Kansas City and vs. Baltimore coming up.

The Cardinals are not in a good spot after extending their head coach and general manager earlier this year, and I will be tuned in to in-season Hard Knocks to see how the team is responding to yet another subpar performance while dropping to 3-6. They feel clearly behind Seattle and San Francisco within their division, and the fourth team in the NFC West just won the Super Bowl last season.

The Lions defense has played tough for three straight weeks following the bye, and coordinator Aaron Glenn deserves credit for helping get things turned around after many were calling for his firing. Detroit needs to take it one week at a time, but I think they can maybe go on a little run here.

The Saints could not build on their shutout Week 8 win, with no answers on either side of the ball in a bad home Monday night loss to the Ravens. I’m still banging the drum on getting Taysom Hill more heavily involved every play—including more time at quarterback.

The Steelers are back from the bye, and the expectation is that T.J. Watt will be back in the lineup. So, making a move up the standings starts this week when Pittsburgh hosts New Orleans.

The firing of head coach Frank Reich was just a matter of time, but the shocker was that Jeff Saturday (the great former center that was an ESPN analyst just a few days ago) as the interim head coach. Clearly, Colts owner Jim Irsay wants to shake things up—and I’d imagine a lot of it has to do with the crumbling of his high-priced offensive line.

The Raiders had blown three 17-point leads already this season—and they had blown just five 17-point leads in the previous 60+ years! This was not the expectation for a team that was hoping to be very strong on offense while having a pass rush to close out games.

Baker Mayfield came in last week and did good things, but the Panthers are going with P.J. Walker again on TNF as they look to redeem their crushing loss in Week 8 to the Falcons. They faced a buzzsaw in the Bengals last week, but the Panthers should get the run game going again in what will be a run-heavy game all-around. And these uniforms are going to be awesome:

Something is lurking in the dark. pic.twitter.com/3WkXqV1wZ9

The Texans made some plays on defense and ran the ball well with Dameon Pierce, exceeding expectations overall against the Eagles last Thursday night. The Brandin Cooks situation is one to watch, as he clearly didn’t want to stay in Houston but will now return to the team after sitting last week.