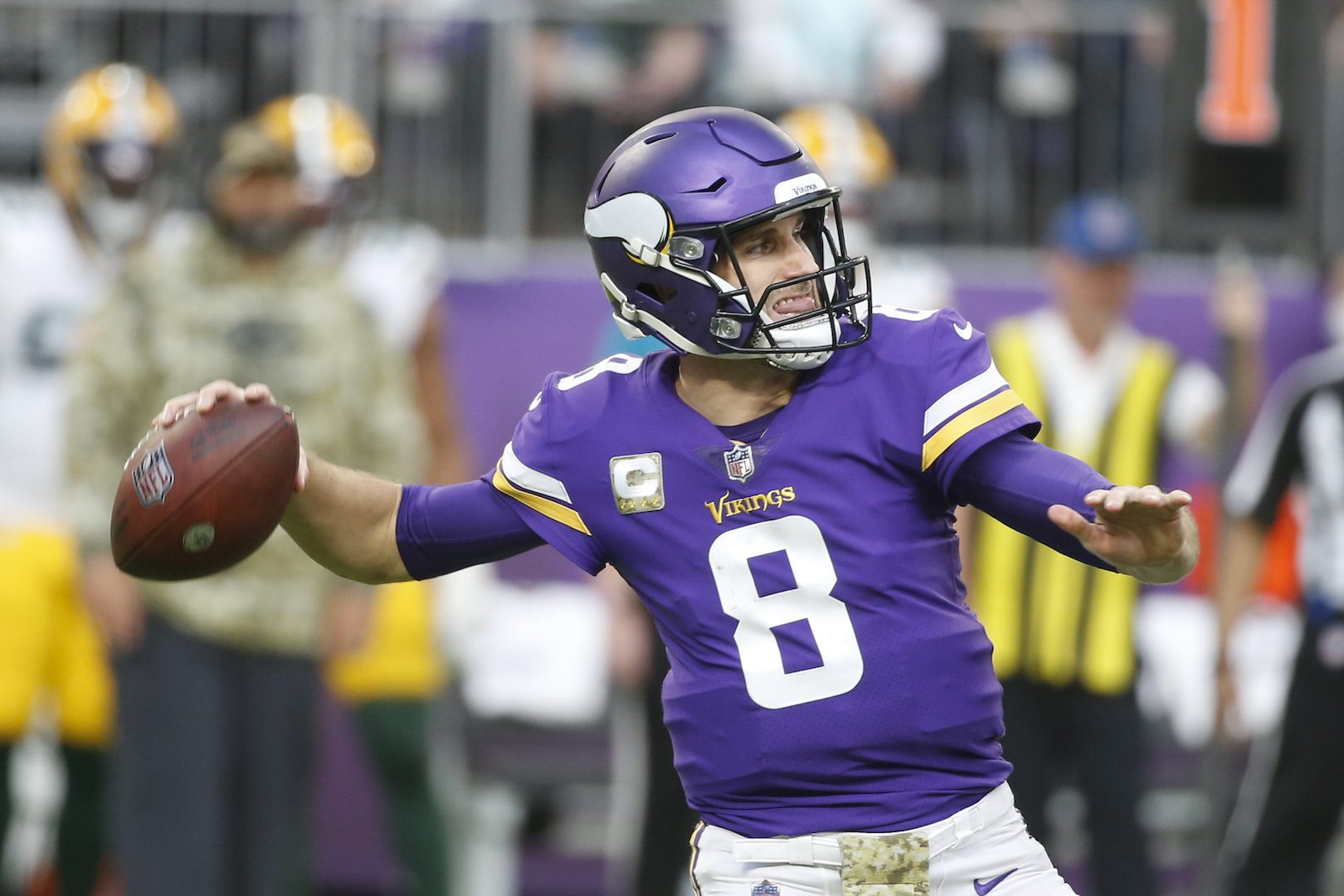 
Parity remains and things can change, but I think teams are now showing us what they are for the most part after the second half of the season began last week. The 2022 NFL Week 11 power rankings include a new No. 1 for the second consecutive week.

The Chiefs were already scary enough, but the involvement of trade acquisition Kadarius Toney—who already looks extremely comfortable with his new team—on offense makes them even more difficult to stop.

We think Kadarius is going to fit right in 😎 pic.twitter.com/jLEVQh8Nln

Despite the home loss to Buffalo, Kansas City is back in control for the top seed in the AFC.

Officiating was very poor (as it unfortunately has been all season around the league, which needs all full-time officials), but the Eagles played a sloppy game at home to bring their unbeaten season to an end. Losing tight end Dallas Goedert for an extended period due to a shoulder injury is a tough blow, but Philadelphia—particularly the run defense—must now re-focus as they look to begin another winning streak.

People are no longer sleeping on the Vikings after their huge comeback win at Buffalo, capped by a Patrick Peterson interception in overtime. Minnesota came into 2022 with an excellent foundation put together by the previous regime, and first-year head coach Kevin O’Connell has taken advantage.

It was good to see Josh Allen on the field and looking like his usual self despite the elbow injury that’s thought to be a pain tolerance thing, but Allen is struggling with turnovers, which is hurting his team in close games. I think Allen is simply feeling a bit invincible at times, but it’s something I believe he will rein in.

Dak Prescott is under fire for a couple of interceptions, but I think both were arguably on the receivers—and there was some questionable officiating at the end of the Cowboys’ loss to the Packers. Dallas has a shot to answer the critics while facing a hot Vikings team this Sunday.

The Ravens had off and should be healthier, with Mark Andrews and others expected to play after the time off.

Despite being down a few key players on defense, the Titans had another gritty outing in their win over the Broncos. It may not always be pretty, but Mike Vrabel has shown that Tennessee is not a bunch to bet against.

The 49ers erased a relatively show start defensively and shut out the Chargers in the second half of their 22-16 victory. On offense, the return of running back Elijah Mitchell was another jolt to an offense that wants to run the ball a ton with Christian McCaffrey and Mitchell.

The Dolphins had yet another offensive explosion over the weekend, but the most promising part was the rushing attack, with Jeff Wilson Jr. (17/119/1) and Raheem Mostert (8/65/1) complementing Tua Tagovailoa’s proficiency as a passer.

I was tempted to move the Buccaneers even higher than this, as I think they might be “back” after a balanced offensive attack and another exceptional outing by Devin White and the defense. Now they’ll take the bye to recharge after beating the Seahawks in Munich. Also, it was cool to see Tom Brady go to Julio Jones for the first ever NFL touchdown in Germany.

One legend to another for the first ever NFL touchdown in Germany. 🐐🐐

Saquon Barkley saw a career-high 35 carries following the Giants’ bye week, and the defense forced a couple of critical turnovers to help New York get to 7-2. This Sunday versus the Lions is an intriguing matchup, with Thanksgiving Day games on deck for both squads.

It sounds like Ja’Marr Chase (hip) might be looking at a Week 12 return, so we’ll see how the Bengals come out of the bye without him as a follow up to Joe Mixon’s sensational five-touchdown outing a couple of weeks ago.

Lost in the disappointment of the loss to the Bucs in Germany was that Geno Smith again played well and made some outstanding throws against a stingy defense. After the bye, Seattle faces the Raiders, Rams, and Panthers.

The bye week gave Bill Belichick and company extra time to prepare and throw in some adjustments for a hopeful repeat performance after already handling the Jets recently. I’m looking for New England’s passing game to take a step forward over the final eight games.

The Jets also had their bye, so we’ll see how they can answer the struggles Zach Wilson has had facing Belichick early in his career. New York’s defense will look to dominate themselves to begin their second half.

The Packers were desperate for a win, and they finally got it by defending Lambeau Field against former head coach Mike McCarthy and the Cowboys. Rookie receiver Christian Watson scoring three touchdowns was the big story, but Green Bay must continue to commit to Aaron Jones and the rushing attack to open things up for Watson and others.

This feels a bit low for a 5-4 Chargers team, but I’m dropping them one spot for now after their loss to the Niners last week. The defense has been showing glimpses, and LA can shoot back up the power rankings with the offense looking to get healthier—Mike Williams (ankle) and Keenan Allen (hamstring) might both be back for Sunday night against the Chiefs.

Jeff Saturday won his first game as interim head coach as the Colts, and the results were as hoped—a firm commitment to Jonathan Taylor and the rushing attack, and veteran Matt Ryan being inserted back into the starting quarterback role. Taylor promptly won AFC Offensive Player of the Week, and I expect Indy to be more competitive if the offensive line can keep improving. Unfortunately, All-Pro linebacker Darius Leonard is out for the year after back surgery, but the Colts defense is still a solid unit.

The Commanders have won three of four with Taylor Heinicke under center, and their lone loss was by three points to a one-loss Vikings team. The improved defense deserves a lot of credit, but I’ve always said Heinicke has some magic to him, and I think it’s impossible to bench him until they lose at least another game or two. Brian Robinson Jr. and Antonio Gibson figure to feature prominently again when Washington faces Houston this Sunday.

The critics (often being a critic is the only thing they’re good at) love to handpick the bad plays—and there were some puzzling decisions by Marcus Mariota, who I believe was just trying to do too much to make plays, last Thursday night—but head coach Arthur Smith has made it clear there is no quarterback controversy. The team believes in Mariota, and having an experienced veteran under center helps an undermanned team compete.

Colt McCoy came through on the road in a battle of backup quarterbacks, and he’s been a steady presence for Kliff Kingsbury when Kyler Murray has missed time. The Cardinals perform better when they are underdogs, so this week against the Niners in Mexico will be interesting—as is the in-season Hard Knocks on HBO.

Jeff Okudah had a clutch pick-six at Chicago, and the Lions have quietly won two straight games. They’re looking to get to 4-6 ahead of Thanksgiving against the Bills.

T.J. Watt’s presence alone makes the Steelers a much different team, and look for him to be more in the swing of things for a divisional matchup with the Bengals this Sunday. I also like what the Steelers offense showed in their win over the Saints, taking care of the ball and playing to the defense.

Not much is going right for the Rams this season, and I’ve been waiting for Aaron Donald, Jalen Ramsey, and the defense to totally take over a game—it simply has not happened for the Rams. Cooper Kupp (high-ankle sprain, IR for at least four games) being out is another blow to a team looking unlikely to get on track this season.

The Broncos looked to be in a good spot for much of the afternoon at the Titans, limiting Derrick Henry again while holding the lead into the third quarter. Losing Jerry Jeudy early in the game didn’t help, but the Broncos still need to figure things out on offense if they’re going to go on a run and have any shot at making an unlikely playoff push.

The Jaguars unsurprisingly lost at Arrowhead, but there is much to be encouraged about again—most notably, the way Trevor Lawrence has been playing since struggling in London. Christian Kirk had another two touchdowns for Jacksonville and is looking like a very good free agent signing despite the overpay talk.

Justin Fields followed up his record-breaking rushing performance with 147 yards and two touchdowns in the Bears’ tough loss to the Lions. Fields has room to grow as a passer, but it’s good to hear the second-year quarterback insist the critical pick-six will never happen again in his career.

Nick Chubb did work as usual, and the passing game showed promise (most notably from Donovan Peoples-Jones) for Cleveland. But the run defense remains a major issue heading into this weekend’s matchup with Josh Allen and the Bills.

Another week of offensive struggles has the Saints pondering a switch back to Jameis Winston at quarterback. I’ll again say the team needs to get Taysom Hill more involved.

D’Onta Foreman again paced the Panthers to victory last Thursday night, and—while I don’t think Matt Rhule should have been fired so early—I like the job Steve Wilks has done with the team since taking over. We’ll see how Baker Mayfield fares now that he’s back in the lineup following PJ Walker’s ankle injury.

The fall for the Raiders continues one year after a playoff berth, and Derek Carr is understandably taking it hard. There appears to be a problem with the entire roster buying in, and you’re never going to win like that.

Jerry Hughes added another sack for a Texans team that’s battling, but it’s clearly going to take time to build Houston up.