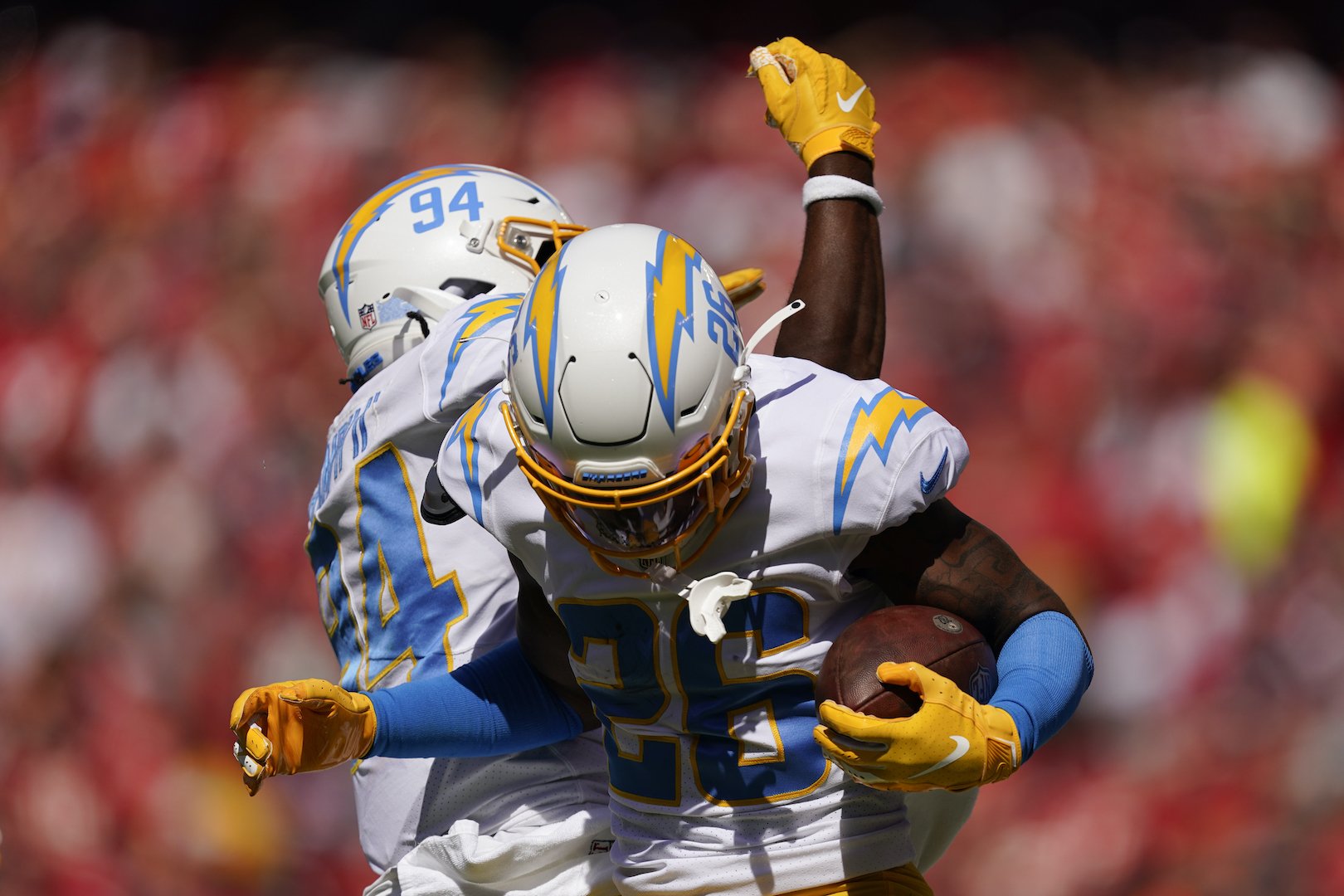 
It’s looking like there are around five or six teams that have a case for No. 1, but the Eagles remain in the top spot of the Week 17 NFL power rankings despite their loss at Dallas last week.

Four turnovers by the Eagles obviously hurt, but Gardner Minshew did a nice job operating a sensational offense with what’s quietly perhaps the NFL’s best receiving duo in A.J. Brown and DeVonta Smith. The Philly run defense remains stout after the midseason additions, but now it’s the pass defense that’s become a concern.

Similarly, the Chiefs defense is a unit that’s had strong stretches late in seasons—particularly at home. That continued last week against the Seahawks, and Kansas City now has two divisional matchups while looking to get to 14-3 with a shot at the AFC’s top seed if the Bills lose a game.

The Bengals have come off their second straight game with a tale of two halves, but they came back at Tampa two weeks ago and held on at Foxboro last week to secure a couple of wins. The group just knows how to win games, and I’ve been looking forward to this Monday night’s home matchup with the Bills for a while.

The Commanders defense had a poor performance particularly when trying to contain George Kittle (6/120/2), but Brock Purdy continues to look not at all like a rookie since taking over at quarterback for the Niners. San Francisco is arguably playing better than anyone right now.

Dak Prescott bounced back from an early interception (on a nice play by Josh Sweat) and was flawless the rest of Christmas Eve versus the Eagles, especially when connecting with CeeDee Lamb (10/120/2). Dallas’ defense has immense upside but hasn’t looked quite as good as I thought they would be (despite the four turnovers forced), but the team is 7-1 against teams with winning records this season.

The Vikings have specialized in winning close games all year, and they did it again at home against the Giants with a 61-yard game-winning field goal by Greg Joseph. Tight end T.J. Hockenson (13/109/2) came up big and is looking like a key trade acquisition for a team with plenty of firepower.

The Chargers are allowing 11.3 points per game over their past three games—three consecutive wins that got them to 9-6 with a clinched playoff berth for the first time under Justin Herbert. I would be playing hard these next two weeks to keep the momentum going heading into the playoffs.

The Ravens were predictably in a low-scoring battle with the Falcons last week, and the offense avoided turnovers while Marlon Humphrey forced a fumble in the 17-9 win. Baltimore will hope Lamar Jackson (knee) can return for Week 17 or Week 18, but I’m not sure he will play before the postseason.

It was a tough loss for the Giants, but they showed they can play with a potential playoff opponent like the Vikings in Week 16. The way Daniel Jones is playing—lasering accurate passes to a limited group—has gone under the radar.

This might be too big of a move up for the Bucs after they barely survived at Arizona on Christmas Night, but Tom Brady is still showing that he can be unstoppable late in games. And now Tampa Bay is just one win away from clinching the NFC South. They should be fired up after Carolina handled them in the first matchup this season.

Evan Engram has been a major factor at tight end for the Jaguars, and Trevor Lawrence is targeting him and his other weapons efficiently while avoiding mistakes in Doug Pederson’s offense. The Jacksonville defense did a good job of getting off the field in third-down situations last Thursday night at the Jets.

Things looked very bad for the Patriots in the first half against the Bengals, but the New England defense totally turned it on and helped the team get in position to win the game at the end—which was controversially stopped when Rhamondre Stevenson fumbled on a play where forward progress is normally ruled. You can say this for just about any team, but the Pats clearly have a few games where questionable officiating might have cost them. A Week 18 matchup with Buffalo looms, but the Pats are still in position to get a couple of wins to make the playoffs.

Perhaps this is too high of a rise for the Packers, but they were able to get the Christmas win at Miami and also had everything else go their way over the weekend. Now Green Bay plays twice at Lambeau Field while looking to finish 9-8 with a great shot to grab a wild-card spot.

The Tua Tagovailoa situation is scary, and I’m praying that he’s feeling 100% soon. Not everyone will agree, but I believe it is wise to sit Tua for the rest of this season to ensure he doesn’t get a fourth concussion (counting the first game against Buffalo where it clearly appeared he suffered a concussion) in one season. Either way, Miami is now in a tough spot after losing four consecutive games in the crowded AFC.

There’s talk that the Titans might rest players tomorrow night with an eye toward a de facto AFC South championship game versus the Jaguars in Week 18, but Mike Vrabel’s squad undoubtedly needs to find something with the passing game under rookie Malik Willis. That said, keeping up with the Cowboys might be a tough task tomorrow night.

With how well they have been playing for several weeks, it was probably just a matter of time before the Lions put up a dud—it happens to just about every team at some point. While Detroit was basically manhandled by the Panthers, at least Jared Goff and the offense showed some fight to make it a respectable final score.

Never bet against Mike Tomlin finding a way to keep his team competitive. Kenny Pickett led a game-winning drive capped by a touchdown to George Pickens a few days after Franco Harris’ death on a night where Harris and the Immaculate Reception were celebrated. I think just about all football fans (aside from Raiders fans and maybe fans of Pittsburgh’s rivals) were happy with the result. The defense deserves big-time recognition for limiting both Josh Jacobs and Davante Adams in the game.

The ground game led by rookie Ken Walker III showed improvement, which is something to build on for the final two games. But Seattle missed Tyler Lockett (hand) on offense last week, so we’ll see if he can return for a home matchup with a tough Jets defense on Sunday.

The Commanders weren’t much of a match for the Niners last week, and now Ron Rivera is turning back to Carson Wentz as the starting quarterback for the first time since he landed on injured reserve. I believe the thinking is that Wentz has more upside than Taylor Heinicke to make a legitimate Super Bowl run behind Washington’s defense (though Heinicke did already help the team get a win at potential top seed Philly this season).

I think a clean break this offseason is best for Zach Wilson’s career moving forward, as it’s difficult to see things working out in New York with the fans booing every little thing that goes wrong. Mike White (ribs) will be back in the lineup while the Jets look to get back on track. They’ve lost four in a row after a 7-4 start.

The Panthers could certainly be higher than this with the way they ran all over the Lions last week and remain in a win-out-and-in scenario in the NFC South. The formula this week is probably straightforward: see if they can run on a what’s been a surprisingly vulnerable Bucs run defense this season.

This season has not gone as expected for the Saints, but they got a tough Christmas Eve win at Cleveland and are putting some victories together to at least avoid handing the Eagles a top draft pick. But now New Orleans faces a double-motivated Philadelphia coming off a loss.

The blown leads and inconsistency from the Raiders this year has basically been unmatched. Not giving Josh Jacobs the ball 25-30 times (he had 16 touches) in frigid weather was one of the big surprises of Week 16. And the connection between Derek Carr (three interceptions last week) and Davante Adams disappearing the past couple of games has been shocking.

The defending champion Rams have shown some heart down the stretch and are visibly motivated to end the season on a good note. Baker Mayfield was excellent in the Christmas Day win over the Broncos, and Sean McVay and the Rams might have to strongly consider locking up the former No. 1 pick to a team-friendly long-term deal this offseason.

While Deshaun Watson gave his team a shot to win at the end of the game, he’s looked dreadful since his return from a near two-year hiatus. Cleveland is at Washington and at Pittsburgh the final two games.

The Falcons lost yet another one-score game, but rookie running back Tyler Allgeier was again a bright spot in last week’s loss to the Ravens. I’d like to see if rookie quarterback Desmond Ridder can get something going at home over the final two weeks.

The Tampa Bay defense turned up the pressure at key moments, but I thought Trace McSorley did a solid job in his first career start on Christmas Night. The big story for the Cardinals is that future Hall of Famer J.J. Watt is retiring after the season:

My heart is filled with nothing but love and gratitude. It’s been an absolute honor and a pleasure.

The Texans were able to get back on the board with their first win since Week 5, sealed by a Christian Harris interception when the Titans had a chance to drive for the game-winning touchdown. Houston has actually been playing well the past few weeks and deserves to move up a few spots.

I understand giving Nick Foles these final three games to show what he can do as a former Super Bowl MVP, but he had a tough time facing a surging Chargers defense on Monday night. The Indy defense is playing hard, and I think we need to see more Zack Moss—who has run hard—and the ground game to take pressure off the unit.

The Bears have now lost eight in a row and might end up finishing with the worst record in the league, but Justin Fields continues to flash and pick up notable compliments from opponents.

I said before how the Broncos were in a lame duck situation with first-year head coach Nathaniel Hackett, and it’s not surprising that the new ownership group pulled the trigger on firing Hackett after the embarrassing Christmas Day performance. This year obviously is not close to being all on Hackett, though, and there’s a lot to be fixed in Denver.