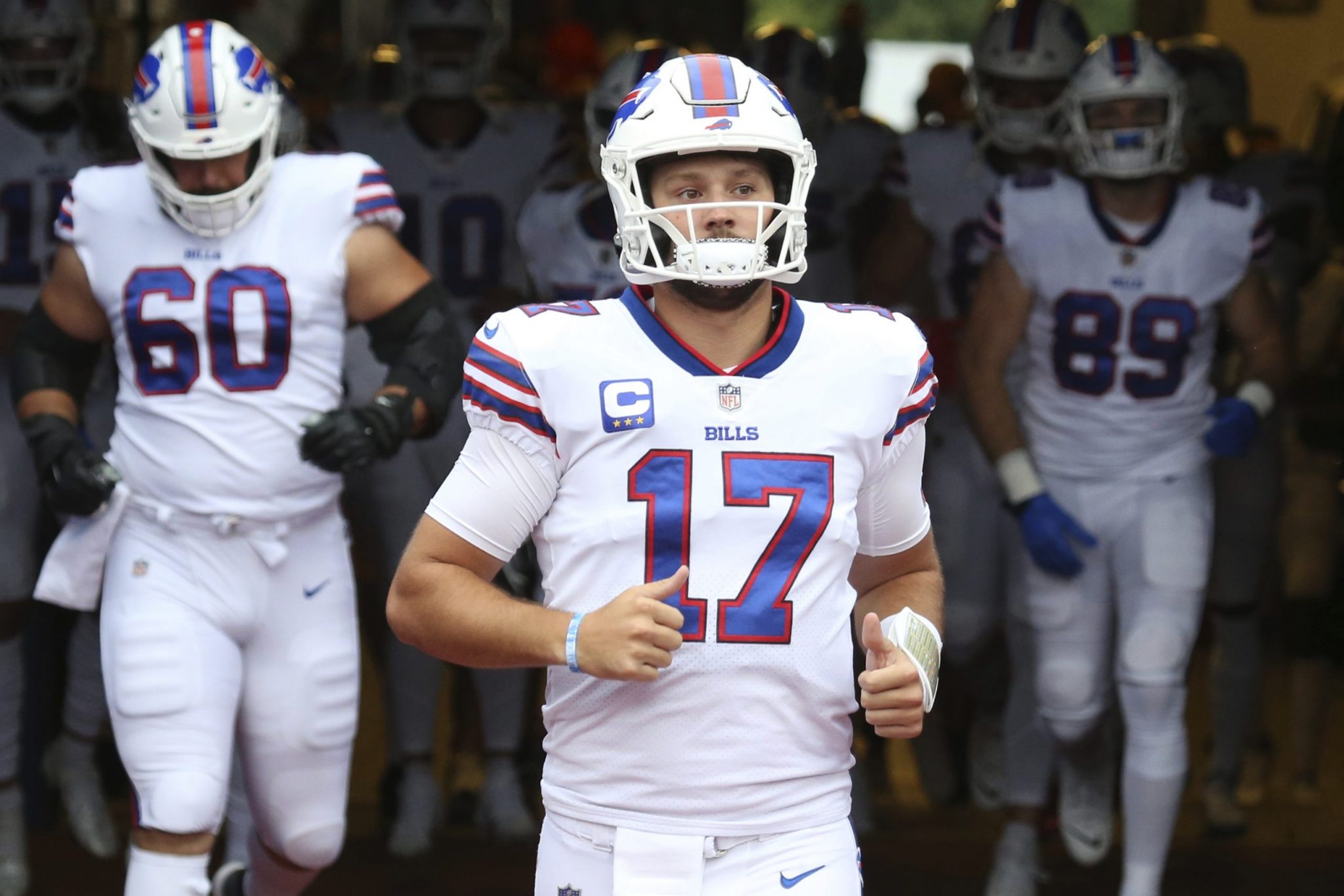 
Any given Sunday. Parity continues to rule this NFL season (along with “a lot of bad football”, as Tom Brady said—including from his own Bucs, who are coming off an upset loss to the Steelers), and there’s plenty of shuffling for the Week 7 power rankings.

Josh Allen was crazy clutch in leading the Bills to the game-winning touchdown, and the MVP frontrunner is simply on another level right now in a Bills offense that has answers for whatever is thrown at them. And Von Miller (six sacks this season) stood out as a major difference-maker in helping close out the huge win over the Chiefs that puts Buffalo in the driver’s seat for homefield in the AFC.

The Eagles are the same story every week: a scorching start and a relatively slower second half. The bottom line is the entire team is playing at a high level, and they might continue to be favored every week for the rest of the year.

Despite the loss at Philly, the Cowboys rise in the power rankings given that a) Dak Prescott is back, b) many teams behind them are not playing well, and c) I like the way they battled back to make it a game on Sunday night. In a league with a lot of bad football right now, the Cowboys defense is something that can probably be trusted.

Like the Bills with Tre’Davious White, hopefully the Chiefs are healthier for their potential rematch during the playoffs. Interestingly, Patrick Mahomes now has an interception in each of his past three fourth-quarter game-winning drive opportunities dating back to last postseason—it was just something surprising to think about when I heard and realized it.

The Giants look 100% legit, and the most underrated part of it is the play of quarterback Daniel Jones, who is not only taking care of the football better than ever but is also showcasing the accuracy that helped make him the sixth overall pick in 2019. Kayvon Thibodeaux has been an impact player to begin his career for what’s been a strong Giants defense.

For some reason it feels weird putting the Vikings at No. 6 ahead of teams like the Bucs and 49ers, but they are now at 5-1 entering the bye—and NFC teams like the Bucs, Niners, and Packers simply haven’t looked consistent enough through the first six weeks. An all-around effort—with the defensive forcing turnovers despite giving up big yards—helped Minnesota get the Week 6 win at Miami.

I’m not going to blame it on Tom Brady attending Robert Kraft’s wedding on Friday night, but something is just off for the Bucs early this season. The loss to the Steelers, who were basically without their starting secondary including All-Pro safety Minkah Fitzpatrick was a stunner, and Tampa Bay would potentially have four consecutive losses right now if not for the bad roughing the passer call on Grady Jarrett a couple of weeks ago.

The 49ers are very banged up, and they couldn’t come back from the early 14-0 first-quarter deficit in Atlanta. The turnovers hurt a great deal (including a Jeff Wilson fumble that was returned for a touchdown), and they’ll undoubtedly need a cleaner game against the Chiefs this week.

That was more like it for the talented Chargers defense, with Khalil Mack and Derwin James both playing well in the win over the Broncos on Monday night—though the status of high-priced free-agent acquisition J.C. Jackson at corner is something to keep an eye on after he was benched in the second half. I think the offense needs to make sure they get Mike Williams the ball more.

The Packers are in rough shape right now, but with the way Quinnen Williams (five sacks this season) and the Jets defense are playing—paired with an offense that compliments it well with Breece Hall and company—a win at Lambeau Field is highly impressive. New York deserves to land in the top ten.

Green Bay obviously needs to get Aaron Jones (three carries in the first half last week) the ball more somehow, as it seems to be the same story every week without any change. That said, the offensive line did not play well at all in the Week 6 loss—and the Packers’ success starts there.

The Titans are coming off their bye, so they had an extra week to prepare for a Colts team they already beat this season. Look for a heavy dose of a rested Derrick Henry on Sunday.

From the outside looking in, the Ravens locker room does not seem happy right now, with passive aggressive social media usage coming from a few different players. Lamar Jackson’s late interception was a huge blow, but Baltimore as a team gave up another lead, which has happened in all three of their losses this year.

The connection between Joe Burrow and Ja’Marr Chase finally getting on track in New Orleans was extremely predictable, and the Bengals defense still hasn’t allowed a second-half touchdown this season.

The Patriots totally dominated the Browns, and they are outscoring opponents 57-15 over the past two games with a good shot to get to 4-3 when they host the Bears on Monday night. Mac Jones might be back for New England, and his time off with the high-ankle sprain while watching Bailey Zappe perform very well could help him do a better job of taking care of the ball when he returns.

With no Jonathan Taylor (ankle) for a second consecutive game, Matt Ryan put the team on his back by throwing 58 times (42/58 for 389 yards and three touchdowns, including the game-winner to Alec Pierce late). And Ryan was able to buy more time in the pocket thanks to the improved play on the offensive line, sparked by the switch to veteran Dennis Kelly at left tackle.

The Dolphins have had extremely poor quarterback luck, with their starters leaving the game early in each of the past two games following Tua Tagovailoa leaving with the scary concussion a few Thursdays ago. Tua is now back for Sunday night against the Steelers, so we’ll see if that helps Miami get back on track after an off couple of weeks.

Rams lost left tackle Joe Noteboom for the season to a torn Achilles, so the primary concern for the defending champions gets worse. As for the positives, Allen Robinson’s involvement on offense was encouraging, and the defense stepped up in the win over Carolina.

I thought the Falcons could compete in Year 2 under Arthur Smith, but they are surpassing even my expectations as someone that is higher than anyone on Marcus Mariota at quarterback. Mariota won NFC Offensive Player of the Week after a highly efficient performance versus the Niners, and the defense continues to fly around and play better than expected.

Pete Carroll challenged his defense to step up ahead of Week 7, and they came through with a dominant performance in the win over the Cardinals. Rookie cornerback Tariq Woolen now has an interception in four straight games.

The undermanned Steelers defense played very hard, including against the run, in their win against the Bucs—again, Mike Tomlin’s squad proved they are not a group to count out. It was their first win without T.J. Watt, and Sunday night should be a close game as Pittsburgh looks to get to 3-4. I also want to recognize Mitchell Trubisky for coming off the bench and playing great in what’s been a disappointing situation for him personally.

The Lions emerge from a needed bye week that should get D’Andre Swift and Amon-Ra St. Brown, among others, healthier. But first up in their return is a matchup with a Cowboys squad that gets Dak Prescott back.

There’s still time to turn things around in the NFC West, but the Cardinals offense is not getting anything done, and the recent extensions for Kliff Kingsbury and general manager Steve Keim are looking a bit shaky through six weeks. We’ll see if DeAndre Hopkins can spark Arizona’s offense in his return from suspension, but the Cardinals will unfortunately be without Marquise Brown (foot) for several weeks.

The stingy Bengals defense shut the Saints down in the second half, and the New Orleans defense was unable to hold up and get the win despite their lead. The Saints are dealing with many injuries, including both Andy Dalton and Jameis Winston dealing with back issues—I’d like to see Taysom Hill get a lot of work at quarterback, and that’s not just because I have him on my fantasy team as a tight end option.

The Raiders come back from their bye and will have Davante Adams in the lineup as the legal process plays out following his push of a photographer a couple of Mondays ago. Vegas needs him and everyone as they look to go on a run at 1-4.

The Jaguars continue to tumble from their strong early-season start, but it’s difficult to pinpoint their exact struggles to this point—a couple of weeks ago, the offense was only able to put up six points; in Week 6, Shaquill Griffin and the defense struggled. Overall, Jacksonville might just need to get more consistent and learn how to win games.

Russell Wilson is now dealing with a hamstring injury in addition to the shoulder issue, and the offense simply isn’t playing up to the standards set by the defense. Rookie tight end Greg Dulcich, who caught the first touchdown of the game on Monday, was a bright spot in his NFL debut.

The Patriots did about as good of a job as you can in containing Nick Chubb—but he’d still ideally get more than 12 carries no matter the score of a game. The Browns defense must figure things out quickly, or Lamar Jackson and the Ravens will dominate on Sunday.

The Commanders were able to get a win, led by a key fumble recovery on special teams and a Brian Robinson Jr. (who continues his inspiring return from being shot twice just weeks ago) touchdown run. I’m interested to see how they fare with Taylor Heinicke—a quarterback I’ve always liked as a capable starting option—with Carson Wentz out because of a fractured finger. As for the Daniel Snyder ownership situation, it seems there are powerful forces that want him out.

The supporting cast is not tremendous, but there are times when Justin Fields needs to make things easier on his offensive line and pull the trigger on throws to avoid some of the sacks he’s taking. The defense played tough last Thursday, and they should be in a defensive battle at New England this week.

As the Texans come back from their bye week, getting a win over a fellow one-win Raiders team is imperative if Houston is going to make a playoff push in 2022.

A very conservative offense was able to keep the Panthers somewhat in the game considering Derrick Brown and the defensive line was again impactful, but it looks like this will be a very long season after firing head coach Matt Rhule.