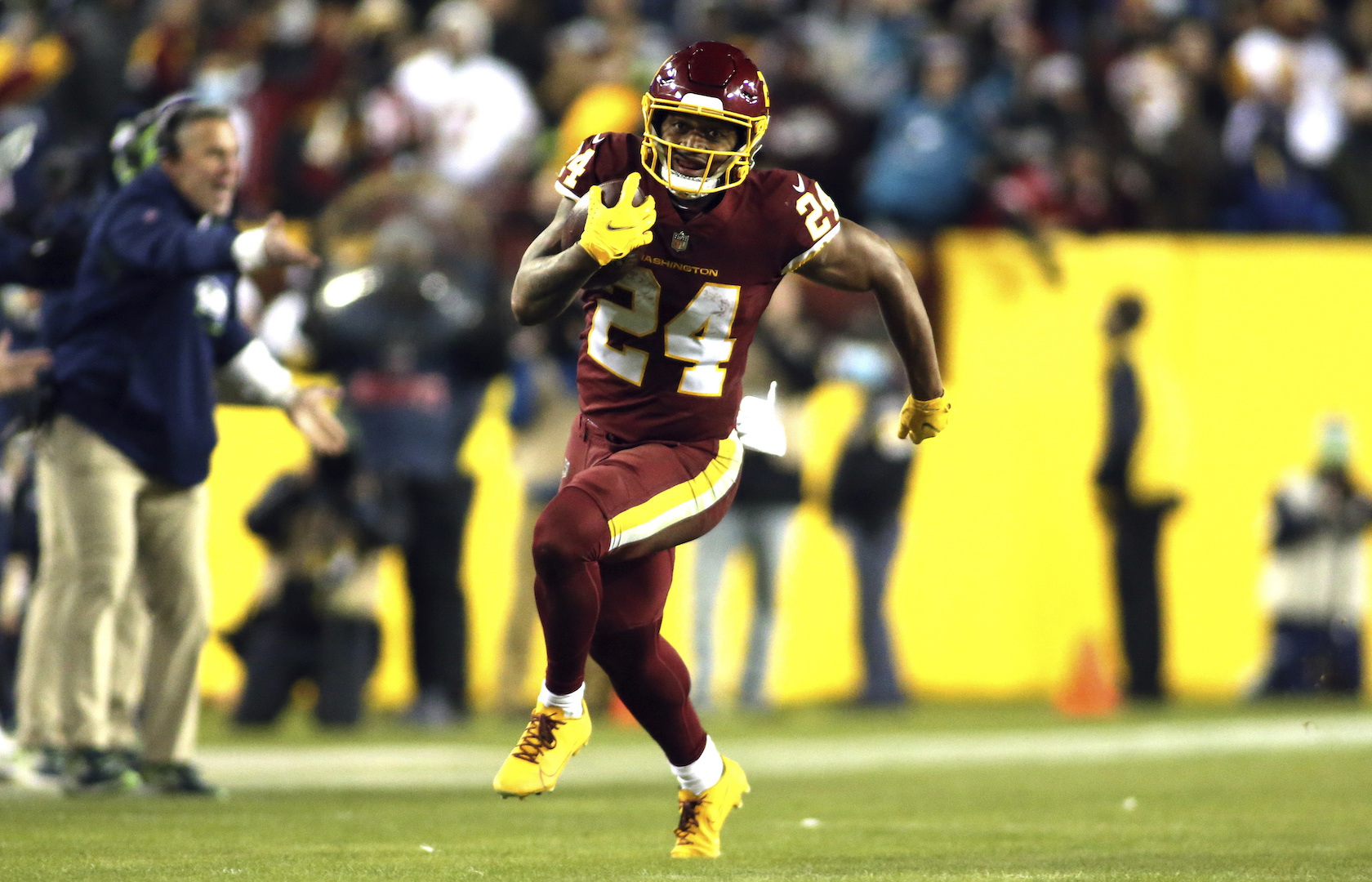 
The 2022 NFL power rankings continue to shuffle a ton for Week 8, and I anticipate that will continue to happen in what’s been the most unpredictable year I can remember.

After taking the driver’s seat for the top seed in the AFC a couple of weeks ago, the Bills return from their bye as double-digit favorites for Sunday night when they host the Packers.

The Eagles also emerge from their bye, and they’ll face a Steelers team led by a rookie quarterback trying to find his footing in Kenny Pickett.

Patrick Mahomes and the Chiefs’ explosive and very deep offense—which is finding its groove with the revamped receiving corps—lit up an elite 49ers defense. Kansas City is now on the bye, but they’ll be without pass rusher Frank Clark for the next two games after he was suspended by the NFL.

The first game for Dak Prescott (thumb) since Week 1 didn’t lead to a huge individual outing from him, but Ezekiel Elliott and Tony Pollard did damage on the ground while the Dallas defense was again dominant in the win over Detroit.

All the wins have been within one possession (as was their lone loss to the Cowboys), but the Giants are figuring out ways to win games on both sides of the ball—their latest: ten fourth-quarter points against the Jaguars with both Saquon Barkley and Daniel Jones rushing for over 100 yards on the day.

The Vikings had the bye week for extra time to prepare for Kyler Murray and Kliff Kingsbury’s offense, and they are in an excellent spot in the NFC North overall with three wins within the division and the Packers continuing to struggle.

This video lays out about everything you need to know for the Titans led by Mike Vrabel after they won the top seed in the AFC last year without Derrick Henry for half the season:

Coach Vrabel and Ben Jones shared an emotional moment after Jones left it all on the field on Sunday. (via @NFLFilms) pic.twitter.com/teytghKWIi

In terms of the power rankings, I was too low on the Titans after a couple of losses to begin the year. Tennessee already has two wins over Indy within the AFC South.

The Ravens were able to hold on to their lead against the Browns, which might exorcise some daemons to some extent for a team that’s given up a few games late over the first six weeks. Gus Edwards (knee) was a boost for the run game in his 2022 debut.

Joe Burrow and the Bengals totally went off against Atlanta, and the key is the offensive line showing improvement—remember, Burrow missed time during the summer, and he might have needed more reps to get comfortable behind the new unit. It cannot be overstated how impressive it is that the Bengals still have not allowed a second-half touchdown this season.

The Jets were able to grind out a win at Denver to improve to 5-2, but it comes at a cost: star rookie running back Breece Hall (knee) and key offensive lineman Alijah Vera-Tucker (triceps) are both out for the year. After already adding running back James Robinson from the Jaguars, general manager Joe Douglas figures to remain aggressive at the trade deadline if he feels it’ll keep his squad in contention.

While an exceptional unit, the Niners defense did come into their matchup with the Chiefs banged up—and it led to a somewhat shocking performance. San Francisco—which now has All-Pro running back Christian McCaffrey as another weapon on a loaded offense—will look to get back on track facing a Rams team they’ve owned in the regular season.

The most stunning result of Week 7 was the Buccaneers losing to the Panthers while not scoring a touchdown—but looking back, it probably shouldn’t have been all that surprising. There just remains something off with Tampa Bay, and we’ll see if the short week can help them snap out of it.

It was nice to see Tua Tagovailoa back on the field and looking like his usual self (though arguably being a bit too aggressive running the ball instead of sliding or throwing it away), and the Miami defense stepped up with critical stops to end the three-game losing streak.

The Packers are in a similar spot to the Bucs, and the struggles of both teams are a prime example of how upside-down much of this wacky NFL season has felt. A positive from the loss to the Commanders was that Aaron Jones got going as a receiver, but Green Bay is still looking to put together a complete game in all three phases.

Ken Walker III already looks like a star running back coming off his 23 carries for 168 yards and two touchdowns in the Seahawks’ win over the Chargers, and the entire rookie class continues to shine. Hopefully DK Metcalf doesn’t miss much time with his knee injury.

The run defense remains a problem for the Chargers, and this bye week might come at a good time with how beat up the squad is. Mike Williams is going to miss time with a high-ankle sprain just as Keenan Allen (hamstring) returned to the lineup, and I think Justin Herbert might still be feeling the effects of the Week 2 rib injury, as he has not looked like himself.

Sean McVay and the Rams coaching staff had the bye week to prepare and try to figure something out facing a Niners defense that dismantled the LA offense in the first matchup. Getting Van Jefferson (knee) back for the first time this year should be a boost.

Two pick-sixes at the end of the first half sparked the Cardinals getting a much-needed victory last Thursday night against the Saints. The Arizona defense has been the biggest bright spot for the team this season, but the offense showed good signs last week.

The second most surprising result of Week 7 behind the Bucs was the Patriots getting blown out in Foxboro by the Bears. The quarterback situation is very intriguing, but I would think they’ll go with Mac Jones, especially after it’s been revealed that the SkyCam impacted his early interception, which could have potentially changed the course of the game even in a three-possession loss.

Is it just me or did Mac Jones' INT hit the line that the sky cam is attached to? Wasn't underthrown by much. This HAD to affect it. Sorry baht it. #Patriots pic.twitter.com/zMC0tncJKC

Of all the results of the week, the most jarring was the Colts benching Matt Ryan after—as Colts head coach Frank Reich said—not living up to their end of the bargain this season in providing a great offensive line and rushing attack. My issue is that Indy is 3-3-1 and Ryan basically carried them to a win a couple of weeks ago, and it seems like they are just giving up on the offensive line (which is highly paid) possibly improving. That said, Sam Ehlinger showed his gamer mentality while with the Texas Longhorns, and I’m interested to see how he does.

The Falcons fought back with a 17-point flurry in the second quarter, but they were probably just outmatched by a more talented Bengals team last week. This season has been so crazy that you can’t think a schedule will be easy or anything like that, but Atlanta’s next six games look promising on paper: vs. CAR, vs. LAC, @ CAR, vs. CHI, @ WAS, vs. PIT (all coming before their Week 14 bye).

Running back Josh Jacobs keeps performing like one of the top players in football, and the excellent rushing attack should keep the Raiders in every game. These next two weeks on the road at New Orleans and at Jacksonville could determine whether Vegas can make a move this year.

He started off rusty including with a pick-six and a few other close calls, but Taylor Heinicke showed what makes him a capable starting quarterback in the Commanders’ upset win over the Packers. The defensive line might match up well with the Colts this week in what should be another close contest.

The Bears could be higher than this (including over the Patriots) after their road Monday night win, but I’ll move them up six spots for now. Chicago is utilizing Justin Fields’ legs much more now, which is undoubtedly their best path to wins.

I was impressed with how the Lions defense came off the bye flying around, but now it was the offense that let them down against the Cowboys. After such a hot start, the unit is struggling all around, and they had a shot to take a fourth-quarter lead at the goal line but could not come through in the eventual 24-6 loss. Losing Amon-Ra St. Brown to the NFL’s new concussion protocols didn’t help, but he’ll be back this week after the team said he didn’t suffer a concussion.

The two pick-sixes were mentioned earlier, but the earlier red-zone interception by Andy Dalton might have hurt the most in the loss at Arizona. Overall, this team traded a first-round pick expecting to compete in 2022, so things must get turned around quickly. I’d like to see Taysom Hill get more time on the field, including at quarterback.

As the trade of James Robinson indicates, the Jaguars are a team that might be a year away and is trying to learn how to win and close games. That said, Travis Etienne is looking like a total gamebreaker and is among the guys that can put on a show in London this Sunday.

Kenny Pickett is completing 68.5 percent of his passes, but he’s been unable to avoid key turnovers (two touchdowns compared to seven interceptions), and the Steelers haven’t gotten much going on go balls despite having an explosive receiving corps. The Week 6 win against the Bucs doesn’t look as impressive after another loss by Tampa.

Russell Wilson (hamstring) looks set to return for this Sunday in London, and the offense needs to somehow make things easier on the defense that continues to play well. There’s talk the Broncos might be sellers at the deadline next week if they drop to 2-6.

In a 23-20 divisional loss, Nick Chubb needs more than 16 carries. A positive is the defense really stepped up, and they’ll need to do so again against the Bengals on Halloween Night.

PJ Walker did a good job of managing the game and showed why I’ve believed he can successfully run an offense and is at least a promising backup quarterback in the league. In addition to the defense performing again, the Panthers also ran the ball well on the Bucs—and overall they came out fired up after a rough couple of weeks that included firing their head coach and trading away Christian McCaffrey.

After giving up 21 fourth-quarter points in a 38-20 loss to the Raiders, the Texans drop to No. 32 in the power rankings. Davis Mills and the offense were fine for the most part, but the interception was a bad one and one for the second-year quarterback to learn from.