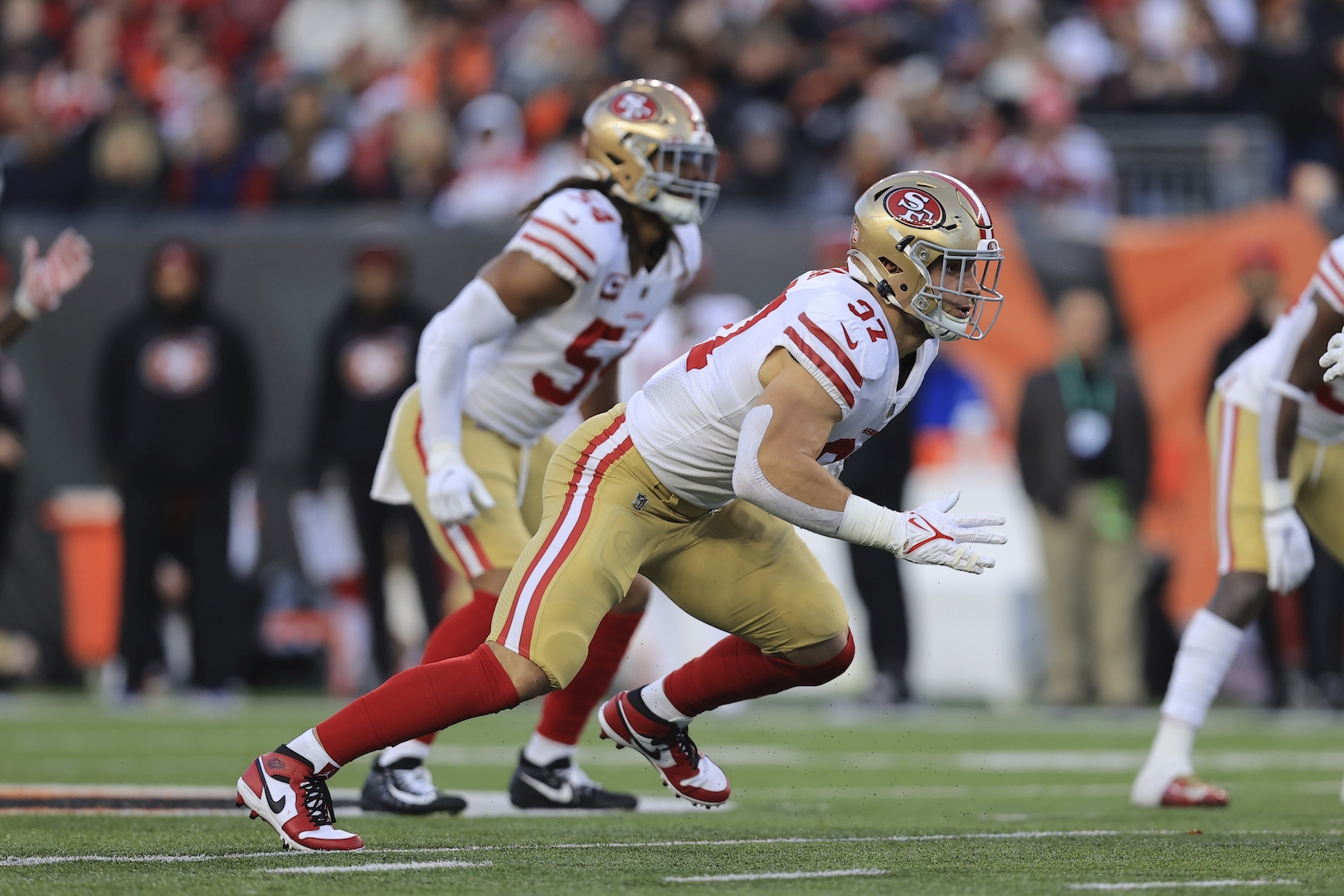 
There’s a bunch of parity still in the middle of the league, but the top teams and the bottom teams are arguably becoming clearer with the Week 9 NFL power rankings.

The Bills weren’t as sharp as usual in the Sunday night win over the Packers, but they comfortably improved to 6-1—and All-Pro cornerback Tre’Davious White, who is one of the most underrated players in football, was activated off the PUP list and might make his season debut this Sunday against the Jets. The acquisition of running back Nyheim Hines from the Colts gives Buffalo even more firepower on offense.

The NFC’s top team also got a comfortable win last week, with A.J. Brown catching three touchdowns (all on go routes) in the Eagles’ 35-13 win over the Steelers. Star rookie defensive lineman Jordan Davis will miss at least a few weeks with a high-ankle sprain, so that’s something to keep an eye on; but it’s all sunny in Philadelphia—with the Phillies up 2-1 in the World Series—right now.

The Chiefs had their bye, but they were not quiet, trading for 2021 first-round pick Kadarius Toney—a dynamic playmaker—last week. The extra week allowed Kansas City to gear up to try and contain Derrick Henry this Sunday night. NFL betting odds have the Chiefs as surprisingly heavy favorites over the Titans.

Micah Parsons showed great awareness in his fumble returned for a touchdown, and Tony Pollard was excellent as the workhorse runner with Ezekiel Elliott (knee) out. The Cowboys are in a good spot at 6-2, living up to the preseason expectations to this point.

Za’Darius Smith had three sacks versus the Cardinals and already has 8.5 sacks after signing with the Vikings this offseason following his release from the Packers, and the Minnesota defense is finding ways to make key plays to complement an offense that got stronger after adding tight end T.J. Hockenson at the deadline.

Derrick Henry went over 200 rushing yards for the fourth consecutive time against the Texans (which is just insane), with the Titans utilizing a super-run-heavy approach with rookie quarterback Malik Willis making his first career start. The Titans are flying under the radar a bit heading into an intriguing Sunday Night Football matchup at Arrowhead.

The Ravens got a big road win over the Bucs last Thursday night, and they added star linebacker Roquan Smith in a trade with the Bears yesterday, boosting the defense to help combat some of the top quarterbacks in the AFC. The offense remains very banged up, but Lamar Jackson finds a way to make things happen.

Christian McCaffrey joined Walter Payton and LaDainian Tomlinson as the only players since the 1970 merger to throw, run for, and catch a touchdown in the same game, and the All-Pro running back is an extremely exciting weapon for Kyle Shanahan to utilize. But it shouldn’t be lost how well Jimmy Garoppolo played in the win over the Rams in which the San Francisco also defense stepped up in the second half with a shutout.

The Seahawks defended homefield and beat the Giants somewhat comfortably, with the defense holding New York to 13 points (including a touchdown coming after a Tyler Lockett fumble at Seattle’s own five-yard line). We’ll see what happens, but it might be time to jump on the Geno Smith and Seahawks bandwagon if you still don’t believe they’re legit.

Perhaps the Giants were due for a subpar game after arguably overperforming every week this season. The bye week probably comes at a good time, as they’ll recharge at 6-2 ahead of home matchups with Houston and Detroit when they return to action.

The Dolphins fell behind at Detroit but outscored the Lions 14-0 in the second half to complete another comeback victory and remain unbeaten in games started and finished by Tua Tagovailoa. With clear intentions of competing for a championship, Miami remained aggressive at the trade deadline, acquiring pass rusher Bradley Chubb from the Broncos and running back Jeff Wilson (obviously a natural fit in Mike McDaniel’s offense) from the 49ers.

Monday night’s ugly loss to the Browns is hopefully something the Bengals can just quickly move past as a one-off—but it’s notable that Burrow’s Bengals have struggled against the Browns. Not having Ja’Marr Chase (hip) doesn’t help, but the offense will look to bounce back against the Panthers this week. And the defense suffered a huge loss in cornerback Chidobe Awuzie (torn ACL) while finally giving up their first second-half touchdowns of the year at Cleveland.

The Chargers emerge from their bye to face the Falcons, and I’m keeping an eye on whether Justin Herbert looks more like himself after battling the rib injury early this season.

My preseason NFC pick simply needs the offense to become the elite unit they can become, as the defense had a massive loss in pass rusher Shaquil Barrett (torn Achilles) during last Thursday’s loss to the Ravens. I don’t think personal lives even of figures like Tom Brady and Gisele are much of anyone’s business, but his divorce was publicly announced—and there was undoubtedly a lot on his mind to begin this season, so we’ll see if things can flip for Brady and the Bucs moving forward.

Bill Belichick went with Mac Jones as the clear starting quarterback and sounded pleased with the way he played after the Patriots’ convincing road win at the Jets. The New England defense had a needed bounce back after their ugly home performance in Week 7.

Second-year quarterback Zach Wilson is struggling, but the Jets are trying to overcome very tough losses in Breece Hall and Alijah Vera-Tucker increasing the degree of difficulty on offense. There’s talk that Wilson should or might be benched, and this Sunday against the Bills will be a big-time challenge for the entire team as they look to stay on track with what looked like a breakout campaign.

There were some good things to take from the Packers’ loss at Buffalo—the ability to run the ball with Aaron Jones, Romeo Doubs’ acrobatic touchdown catch, the defense showing some feistiness and forcing a couple of Josh Allen turnovers. But with a challenging schedule on paper coming up, Green Bay is arguably getting into must-win territory this week versus the Lions.

The defense allowing big yards and the Hail Mary to force overtime was disappointing, but the bottom line is the Falcons found a way to win and are currently atop the NFC South (and again, easily could beaten Tampa a few weeks back if not for the bad roughing the passer call—in which case they could be 5-1 in their past six games). Arthur Smith remains in the Coach of the Year conversation at about midseason.

It looked like the Rams might have figured a bit out coming off the bye—both overall and against a Niners team they can’t find a way to beat in the regular season—but they eventually slowed down and weren’t much of a match for their NFC West foe. After a quiet trade deadline for LA’s standards, keep an eye on rookie running back Kyren Williams potentially emerging in the second half.

Taylor Heinicke just finds a way to make plays—and a big part of that is his willingness to give Terry McLaurin opportunities down the field. And Chase Young (knee, IR) returned to practice, so the defense is due for a boost in the next few weeks.

J.J. Watt had a couple of sacks and Isaiah Simmons added one of his own, but the Arizona defense overall didn’t make the game-changing turnovers like the previous week to help elevate the squad with an offense that’s been off. The usage of Rondale Moore (seven receptions, 92 yards, touchdown) was encouraging offensively, though.

Alvin Kamara totaled three touchdowns and the defense totally shut down the Raiders in their 24-0 home victory. Week 8 looked a lot more like the team the Saints expected to field this year, and they’ll look to keep it going in a tougher matchup when they host the Ravens on Monday night.

The Colts fired offensive coordinator Marcus Brady a week after benching quarterback Matt Ryan—and nearly a year after basically pinning last year’s failures entirely on Carson Wentz (who I agree did not play well in key moments, but still). Eventually, there won’t be anyone left to blame for this team’s current failures. Jonathan Taylor had a bad fumble in the loss to the Commanders, but I still think the Colts need to feed him 25 touches per game.

Maybe the trip across the pond can finally get Russell Wilson and the Broncos offense back on track, and the bye week should get the veteran quarterback healthier after being banged up all year. The usage of rookie tight end Greg Dulcich has been very encouraging.

Nick Chubb leads the NFL in rushing yards (841) and rushing touchdowns (ten) as the Browns enter their bye week, and he’s been the engine that’s kept them in the mix through eight games.

The Bears have traded two of their best players in Roquan Smith and Robert Quinn, but their acquisition of wide receiver Chase Claypool from the Steelers is interesting with the offense continuing to improve while using Justin Fields more as a runner. Defensively, it won’t be an easy task trying to bounce back against the Dolphins this Sunday.

Especially coming off the bye, a performance as ugly as the one the Raiders had on Sunday is unacceptable for a team that made the playoffs last year and added Davante Adams and Chandler Jones. The Raiders badly need a win at Jacksonville this week.

The Lions were again able to showcase their potential on offense, but the roster was ultimately overmatched by an explosive Miami team. Expectations were high for Detroit (I picked them to make the postseason), but it’s looking like they might be a year away. We’ll see if the firing of defensive backs coach Aubrey Pleasant can give the defense some type of spark.

Trevor Lawrence is missing throws you would not expect from him, and he’s just been too inconsistent in Year 2—but keep in mind that he’s playing in a new offense and was not in an ideal situation as a rookie. The defense had some disappointing lapses in the London loss, but Travis Etienne (24 carries, 156 yards, one touchdown in Week 8) is a huge bright spot for the Jags.

The Steelers traded away Chase Claypool after drafting promising rookie George Pickens earlier this year, but they added on defense in former high-priced free agent cornerback William Jackson III. We’ll see if both sides of the ball can adjust during the bye—and getting T.J. Watt back in the lineup will be a tremendous boost.

P.J. Walker’s pinpoint bomb throw to force overtime got the attention of Patrick Mahomes, and it’s unfortunate that it didn’t lead to a win for the Panthers. The offense has shown good stuff with Walker under center, particularly with the rushing attack, D.J. Moore getting going, and Terrace Marshall Jr. getting more opportunities.

A late touchdown made the loss to the Titans appear closer than it was, and now they’ll host a juggernaut Eagles squad to kickoff Week 9 in primetime on Thursday Night Football.