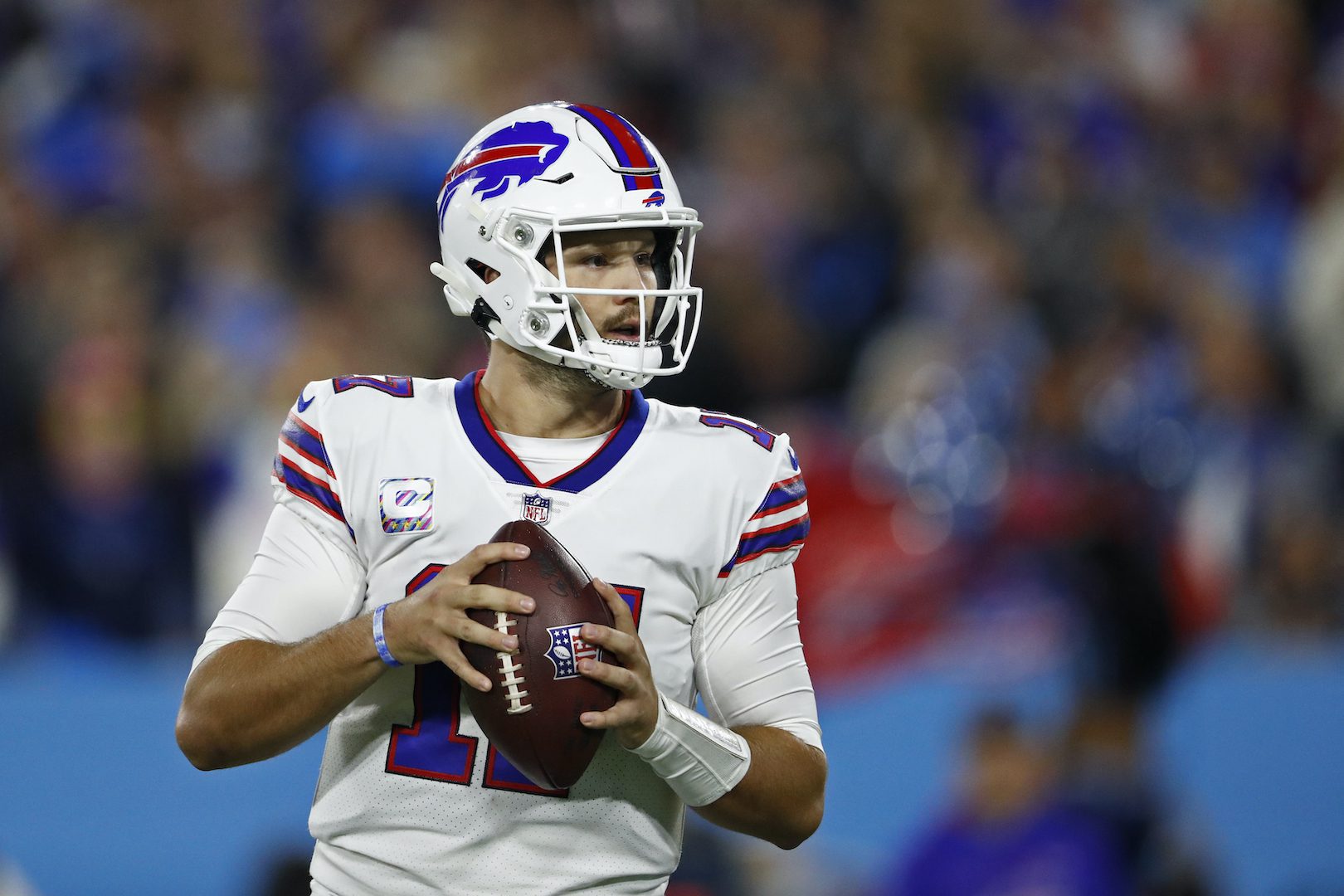 
After several months of waiting, the NFL is back. So, it’s time to unveil my preseason playoff, Super Bowl, and award picks for the 2022 NFL season—all of which surprisingly line up quite a bit with NFL odds. Check out The Wolf Sports Show for coverage on all 32 teams. You can also sign up forFantasy Consigliere and listen to The Fantasy Consigliere Podcast for all your fantasy football needs.

I hit on 10-of-14 playoff teams in last season’s predictions, but this year looks even tougher. In the AFC, I kept going back and forth between the Raiders, Titans, Patriots, and Chargers (and Colts to some extent, as I could easily have Tennessee winning the AFC South) for the playoff spots. The Steelers and Ravens obviously are two more teams that could be in the mix. I expect Pittsburgh to finish above .500 again and have an improved defense, but it might be a case of a 10-7 team missing the playoffs. For Baltimore, they must find a way to stay healthy; I have them as another squad just missing out on playing into the middle of January.

The Chiefs missing out wouldn’t be a major shock considering how difficult their schedule looks on paper, but it’s difficult to pick against Andy Reid and Patrick Mahomes, so they’re in. The Russell Wilson-led Broncos also have very high upside and could make a championship run, but they’re out for me in the NFL’s toughest division with other quarterbacks that aren’t adjusting to new teams.

The Dolphins are another intriguing team if the defense can play well, as I think Tua Tagovailoa can silence many doubters in an offense that includes Tyreek Hill, Jaylen Waddle, Chase Edmonds, Raheem Mostert, and Mike Gesicki.

The Bills as the top seed needs little explanation, as they are the Super Bowl favorites. The Bengals winning the second seed stems from an underrated defense and an improved offensive line that could make Joe Burrow and company an absolute headache for opposing defenses to deal with; look for Joe Mixon to have another big year behind that revamped group.

Matt Ryan should be awesome at quarterback for the Colts; look for him to get the ball more to Jonathan Taylor and Nyheim Hines in space after Carson Wentz did not go to them enough in 2021. I feel very strongly that Brandon Staley and the Chargers need to get away from the analytics, which hurt them at times last season—but we’ll see, maybe it’ll somehow work out this year if they again stick with it heavily.

The Patriots are intriguing in Year 2 under Mac Jones, who showed serious promise as a rookie last season. New England’s defense should be among the best in football, and I think the receiving group on offense with DeVante Parker and a more comfortable Nelson Agholor could come up big. And finally, I can’t leave a tough, stingy Titans team out of the playoffs; they were the top seed last year, and I’m looking forward to another monstrous campaign from a healthy Derrick Henry.

Trevor Lawrence and the Jaguars under new head coach Doug Pederson are a darkhorse type of team to keep an eye on.

We’ll see what happens, but the NFC looks less stacked and a little more straightforward than the AFC. The Vikings were the most difficult NFC team to leave out, followed by the Saints, Panthers, and Cardinals. The concern for the Bucs is the interior offensive line, but I think Tom Brady will help the unit figure it out, and I love what Brady is doing to motivate them by telling the group all the bad things people are saying about them and asking whether they want to prove the doubters wrong. The Packers defense should be among the NFL’s best, and they still have Aaron Rodgers, Aaron Jones, AJ Dillon, and an underrated and deep receiving group—including new additions Sammy Watkins, Romeo Doubs, and Christian Watson—to compete for the NFC’s top seed.

The Eagles have had the “Dream Team” fiasco in the past, so they have been a prime example displaying that a good offseason could mean nothing. But I think Philadelphia had the best offseason of any team in the league; truly, I think they have been reading Wolf Sports because several of their moves have been exactly what we have said we would do. It’ll likely ultimately come down to Jalen Hurts taking the next step, but I believe the Eagles can be Super Bowl contenders—especially if they can avoid Tampa Bay, a team I do not think they would match up well with, in the postseason. I was tempted to make Philly my pick to represent the NFC.

The Rams (primary concern being Matthew Stafford’s elbow), Cowboys (the offensive line needing to step up after Tyron Smith’s injury that will keep him out until December), and 49ers profile as usual suspects. Even if the Dallas offense takes a considerable step back after leading the league in points last season, the defense (which often scored itself and helped with that point total) is a group that can potentially carry them—so it’s a fantastic all-around roster. I might have picked San Francisco to miss out on the playoffs in favor of Minnesota because of the uncertainty surrounding Trey Lance, but keeping Jimmy Garoppolo is an outstanding insurance plan. The SF defense should be excellent under DeMeco Ryans, so the offense really shouldn’t need to do too much despite all the talent it boasts.

As for the Vikings, they are a trendy type of pick, with quarterback Kirk Cousins getting some preseason MVP hype. But I’m most excited about their defense, as a healthy Danielle Hunter coming off the edge is a major difference; Hunter might be the most underrated player in football. Again, Minnesota was the most difficult team to leave out in the NFC.

Call it the Hard Knocks bump if you want, but I have the Lions getting the final playoff spot in the NFC. The offensive line should be among the best in the NFL, and Jared Goff is deadly accurate and has won big games throughout his career—with more to work with now after Detroit added D.J. Chark and Jameson Williams (not expected to play until late in the season). And we know the Lions are going to compete every week.

New Orleans can still be a factor under Dennis Allen, but the departure of Sean Payton is a big reason they are out of the playoffs in my predictions. If the Panthers remain patient with Matt Rhule, I think it would be a matter of time before he gets them completely turned around—perhaps as early as 2022. Arizona feels similar to Denver in the other conference; I like the upside but I’m going with other teams (and being on the in-season version of Hard Knocks, as the Colts were last season, might not help for a team that’s had poor second halves).

I think the roster needs a little more juice, but don’t sleep on the Falcons led by Arthur Smith in Marcus Mariota’s second opportunity as a starting quarterback.

Last season, I picked the Buccaneers over the Bills in the preseason. I personally think Tampa Bay was robbed by poor officiating in the NFC Divisional Round against the Rams, and the Bills played like an offensive juggernaut but also had their run come to an end in the AFC Divisional Round in heartbreaking fashion. I believe both teams will bounce back and get to the Big Game this season; and as hard as it is to pick Tom Brady to lose the Super Bowl, this might be the year for Josh Allen and Buffalo.

I’m not expecting 70-plus touchdowns, but I don’t see why Josh Allen can’t play around as well as he did last postseason (nine touchdowns in two games) when he was locked in about as much as anyone I can remember ever being locked in. Stefon Diggs is one of the league’s top receivers, and Gabe Davis (four touchdowns in the Divisional Round last January) appears primed for a massive breakout. The run game should be improved with James Cook added to Devin Singletary and Zack Moss, and Dawson Knox has become a dynamic threat at tight end. I thought Allen should have been named MVP in 2020 (much of the media still wasn’t on board with him quite yet), but last season’s playoff performances made it impossible for even the strongest of doubters to not respect his game—more MVP votes could follow.

There are many amazing running backs in the NFL, but I still believe that a healthy Derrick Henry to lead the league in rushing is maybe the best bet in sports. The Titans gave King Henry a pay raise this season before they get set to hand him the ball around 25 times per game, and a second 2,000-yard campaign should be well within reach.

There are plenty of options for Defensive Player of the Year, too, but second-year Cowboys defender Micah Parsons simply blew things up for opposing offenses as a rookie last season. He might be even better in Year 2, which is crazy to think about. After 84 tackles and 13.0 sacks in 2021, don’t be surprised if Parsons kicks it up a notch and nears 20 sacks with a bunch of game-changing plays all year.

If we knew Steelers quarterback Kenny Pickett would make a good number of starts this season, he would be the pick. Titans wide receiver Treylon Burks and Pickett’s teammate George Pickens are among the other candidates for OROY. However, I like Texans’ fourth-round rookie running back Dameon Pierce to potentially get 300+ touches for a team that wants to run the ball. The Florida product has some hype after the preseason, and he’ll look to have a productive rookie season.

If the Lions make the playoffs as I’m predicting, Aidan Hutchinson is going to be a big part of that. The second overall pick immediately has double-digit sack potential, and Hard Knocks gave enough of a glimpse to see that he’s the real deal as a pro.

And if the Lions make the playoffs, you can probably lock in Dan Campbell as the NFL’s Coach of the Year. Campbell is ready to go, and I think his team is too. Detroit appears to be doing things the right way, with a group of players that have bought in to Campbell’s culture. I am somewhat concerned that much of the national media is actually high on the Lions, but the team has high enough internal expectations themselves—now it’s time to see if they can get results on the field.