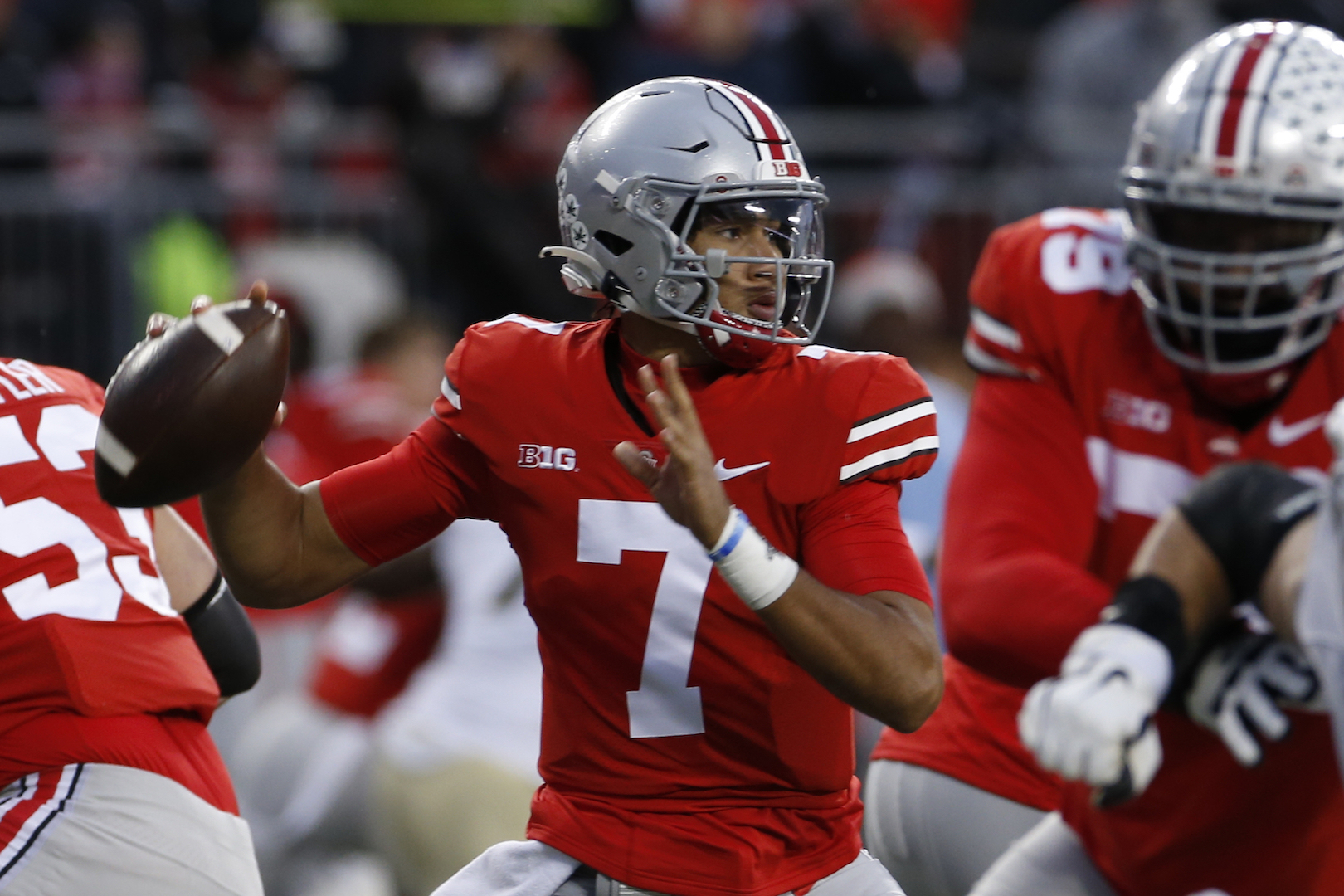 
There is still a long way to go until the 2023 NFL Draft, and much will change in the coming weeks/months, as the first head coach domino has yet to even fall with five openings available—not to mention inevitable trades and free agency. Still, people love mock drafts, and below is my first crack at how Round 1 might play out in April.

It will be very interesting to see if quarterback-needy teams like the Texans try to stay put and get their guy—but Indianapolis saying they’ll be aggressive in pursuing a franchise signal-caller is reason to pay the price it takes to prevent being jumped by a division rival. Young possesses special qualities that overcome any concerns about his size, and Houston already has former teammate John Metchie III on the roster.

The debate between Anderson Jr. and Jalen Carter will be intense over the next three months, so it’s a major decision that general manager Ryan Poles will need to make if Chicago only drops one spot in a trade. Anderson Jr. is more of an impact player in my opinion, but I wouldn’t be surprised if Carter is the selection as perhaps a better scheme fit.

Carter could also go here with new Cardinals general manager Monti Ossenfort having a front-row seat to watch Jeffery Simmons in Tennessee, but Murphy would elevate an edge group that struggled to generate pressure last year. The eventual hire at head coach could change things.

The same is true for Indianapolis and all the teams with openings, but Chris Ballard will control the draft, and team owner Jim Irsay clearly wants a young quarterback. While I currently have C.J. Stroud ahead of him as the No. 2 quarterback in the class, Ballard might fall in love with the traits of Levis.

Seattle potentially losing Poona Ford to free agency would give them a need on the defensive line, and—in addition to creating pressure from the interior—Carter would elevate a run defense that struggled for much of the season. Drafting a rookie quarterback seems unlikely with Pete Carroll turning 72 in September.

The Lions building up the roster so effectively under the current regime allows them to go in a variety of directions, and they might love the idea of pairing a heathier Jeff Okudah (a year removed form a torn Achilles) with another long, suffocating cornerback like Porter Jr. Good luck throwing on a secondary with those two and the impressive Kerby Joseph ranging behind them.

Las Vegas essentially sending Derek Carr on his way and burning the bridge behind him must mean they have an obvious upgrade in mind—with Tom Brady being an obvious candidate. If so, the offensive line needs to be bolstered, and Skoronski should have position versatility to play either right tackle or kick inside to guard.

Although the Falcons could be a candidate for C.J. Stroud, it seems they want to bolster the skill positions before diving in on a quarterback selection (and the rookie contract that comes with it). A possible 2024 signal-caller walking into a situation with top-ten picks in Kyle Pitts, Drake London, and Robinson around him would be more than ideal.

Carolina has a young offensive line and emerging defense, so hitting on a quarterback could quickly vault them into contention with the NFC not having the youthful superstar passers that the AFC does. Stroud could go higher than this after ending his college career with an outstanding performance versus Georgia.

The Eagles might not have the cap space to re-sign James Bradberry following an All-Pro season for him, and Darius Slay turned 32 at the start of the month. Gonzalez won’t turn 21 until the summer and brings speed/upside to the perimeter for Philly.

Jones isn’t viewed as the top offensive tackle by most in the media, but I like him best at the position, and fixing the offensive line needs to be a priority to compete with Derrick Henry still in his prime. It feels like a trade back could be an option here, too.

Adding another playmaker could make sense to help out Bryce Young, and Houston also needs to improve in the front seven after ranking last against the run in 2022. But pairing last year’s No. 3 overall pick Derek Stingley Jr. with Witherspoon could give them the best cornerback duo in the league before long.

Wilson seems to be a popular pick in the top five according to most mock drafts, and that leads me to believe that Joe Douglas would jump at the opportunity to take him if available. It’d be a risk based on how the group underperformed, but New York might be able to hold tight on the offensive line if the recoveries for Mekhi Becton and Alijah Vera-Tucker are on track.

Branch to the Patriots feels like a very easy fit, and his versatility would allow him to fill a variety of rolls alongside Devin McCourty (assuming he returns), Kyle Dugger, and Adrian Phillips. Cornerback might be a bigger need depending on how free agency plays out—especially if the team can’t trust Jack Jones following a suspension late in the season.

Green Bay added to the front seven with Georgia defenders Devonte Wyatt and Quay Walker last year in Round 1, so that continues by adding Smith on the edge. I still think Aaron Rodgers should return after going through growing pains with Christian Watson and Romeo Doubs as rookies.

Despite the sudden strength of the NFC East, Washington is in a very exciting spot with a dominant defensive line and big-time offensive playmakers in Terry McLaurin and Jahan Dotson. If they can hit on a quarterback (which might be in the form of Sam Howell becoming the guy) and find a No. 1 cornerback, watch out.

Forbes fits the prototype of what Pittsburgh wants on the outside, and he brings the ability to not only take the ball away, but also do damage when he gets it with six career pick-sixes. The Steelers would be the most opportunistic defense in football with T.J. Watt, Minkah Fitzpatrick, and Forbes.

Lions general manager Brad Holmes has drafted better than perhaps anyone since he was hired, and Kincaid would be a home-run selection both in terms of value and fit. There are shades of Travis Kelce to the Utah product’s game, and I’m sure offensive coordinator Ben Johnson would know how to utilize him.

Tampa Bay suddenly has a bunch of needs on the roster, and Tom Brady returning would be a surprise. Still, a new offensive coordinator might be enough to improve that side of the ball, and Todd Bowles knows he needs more juice on the edge—which Ojulari would provide with Joe Tryon-Shoyinka not fully emerging and Shaquil Barrett returning from a torn Achilles.

Van Ness is raw for a first-round prospect having not even started for the Hawkeyes, but it doesn’t take long to see the talent when he hits the field. Seattle showed with cornerback Tariq Woolen that they can quickly mold defenders into difference-makers.

The Chargers are one of the tougher teams to mock a selection for, but Phillips—who I have as my No. 12 overall prospect—could slide into the secondary with inside-outside versatility similar to Asante Samuel Jr. Tight end might be an option depending on the offensive coordinator hire.

The first wide receiver comes off the board to the weapon-needy Ravens, and Lamar Jackson gets another deep threat that played in a Lincoln Riley offense (as was the case for Marquise Brown). Addison should have plenty of suitors in this range and pairs nicely with Rashod Bateman.

Minnesota will quickly fall off if their drafts don’t improve under general manager Kwesi Adofo-Mensah, but Andrew Booth Jr. and Lewis Cine both returning to full health and reaching their potential would still leave a need on the backend. Even though there are flaws in his game, Ringo is just 20 years old with room to grow.

Mayer is a different style of tight end than the speedy Evan Engram, but Jacksonville might need to make a change if they’re unable to re-sign the former Giant. It’s easy to picture Mayer turning into a reliable security blanket for Trevor Lawrence in Doug Pederson’s offense.

Dallas always seems to be one of the easier teams to get a read on, and I’m making the early prediction that they’ll go with Ika here and Alabama cornerback Eli Ricks (who has some character concerns) in Round 2. Getting Ika to push the pocket with Micah Parsons on the edge would make the defense even more dangerous.

The Von Miller injury obviously hurt, and Buffalo not hitting on pass rushers has been extremely hurtful in their hopes for a Super Bowl. That said, the offensive line is arguably just as much of an issue, and Torrence can bolster the pass protection and run blocking so Josh Allen doesn’t always need to be Superman.

This is a luxury pick for Cincinnati with D.J. Reader and B.J. Hill on the roster, but Bresee would add explosiveness as an interior pass rusher. The ability of Lou Anarumo’s defense to create pressure has been key in Cincinnati knocking off AFC powerhouses over the past two years.

Garett Bolles was an older prospect that is now on the wrong side of 30 (not to mention coming off a broken leg), so offensive tackle should be in play for Denver here. Johnson Jr. has position versatility to slide in at either tackle spot or guard to begin his NFL career.

Mecole Hardman and JuJu Smith-Schuster are set to hit free agency, and Marquez Valdes-Scantling might be a cut candidate with minimal cap implications by moving on from him. Hyatt’s vertical skillset could make him the perfect long-term compliment to Kadarius Toney.

It sounds like Miles Sanders expects to be paid this offseason, and I don’t see the Eagles meeting his asking price considering the cap situation of a franchise that will need to extend Jalen Hurts. Fortunately, Gibbs is an even better fit in the offense with the pass-catching skillset to create easy yards for Hurts—giving Philadelphia their own version of Alvin Kamara.