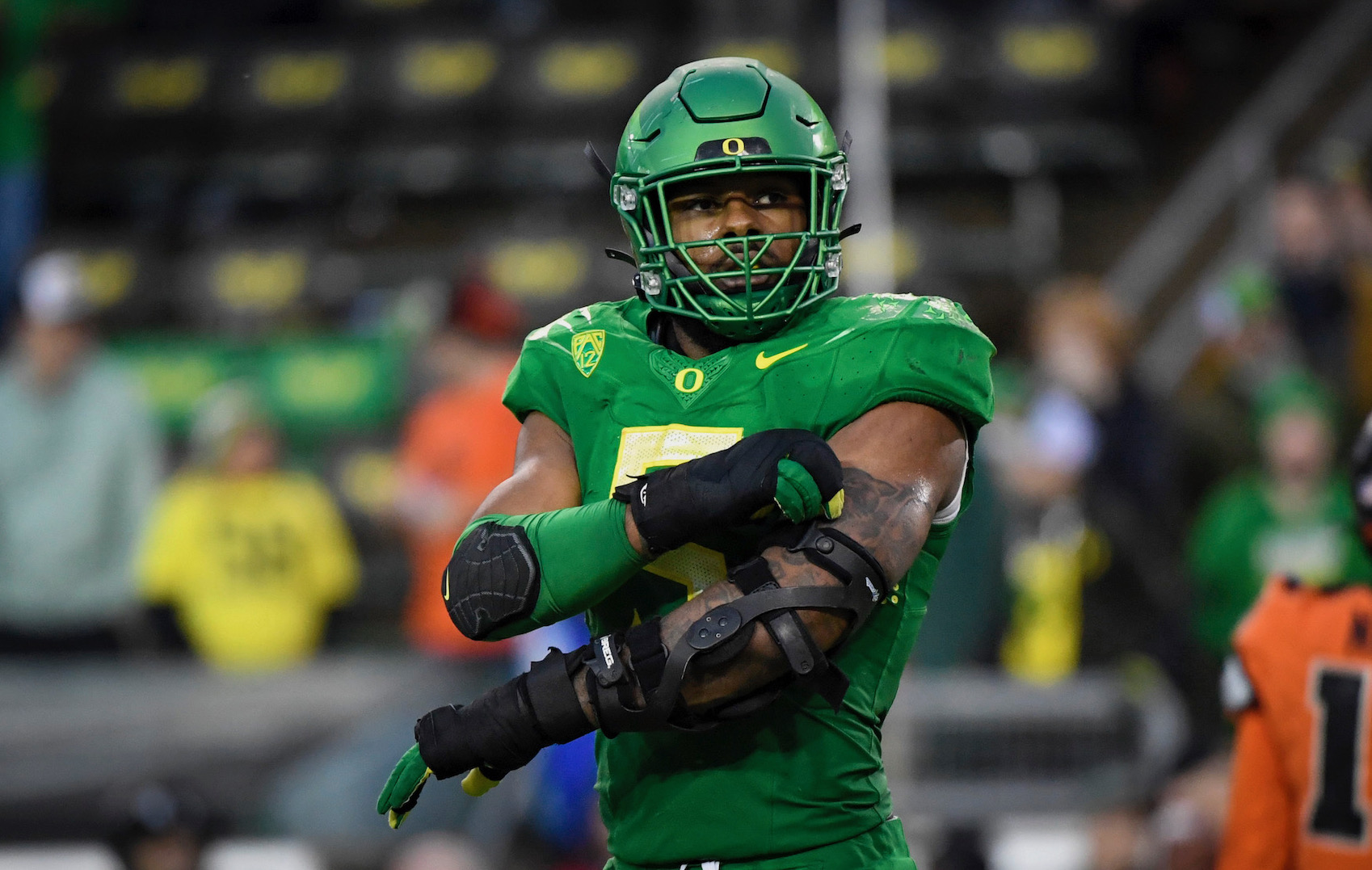 
In the most unpredictable year that I can remember, my final mock draft includes multiple big-time trades and a surprise in the No. 1 spot. You can find our final big board here.

I know all the signs have pointed to Neal not being the pick here, and it could turn out like when I stuck with Josh Allen for the Browns in 2018 despite the Baker Mayfield noise the previous night. But protecting Trevor Lawrence is key, and the Cam Robinson extension—notably a somewhat shorter three-year deal—doesn’t preclude Neal from slotting in at right tackle, especially considering the bookends Doug Pederson had success with as head coach of the Eagles.

Hutchinson to the Lions is thought to be a dream pairing for the franchise, and they’ll be counting on the hometown prospect to lift their defense/team similar to the turnaround enjoyed at Michigan. I would be stunned if the team selected Liberty quarterback Malik Willis (a popular choice among many in the media).

Walker going first overall would have me leaning towards Derek Stingley Jr. or Ahmad Gardner in this slot. Instead, the standout Georgia defender is still on the board, and Houston can afford to be patient as he adds more polish on the edge as a pass rusher—the top-tier instincts and athleticism are already there for Walker.

There has been a lot of talk about NC State offensive tackle Ikem Ekwonu being a favorite of Joe Douglas, but I don’t buy it unless Mekhi Becton is moved before the draft (because the Jets would lose all leverage in trade negotiations). Gardner would bring the skillset needed on the perimeter to help eliminate top receiving threats in the AFC.

The aforementioned Ekwonu remains available, but Cross—despite playing just four snaps there in college—feels like a more natural fit at right tackle. I believe Cross is very similar to Andrew Thomas, and New York basically gets a chance to clone the former No. 4 overall pick with another big-time tackle prospect in the top five.

Carolina not having a second- or third-round pick is difficult to get past, so I have them moving back (2019 first-rounder Andre Dillard could even be a part of the return in a trade back with Philadelphia). For the Eagles, they hop the Giants for Stingley Jr. in an aggressive move to fill a major hole across from Darius Slay at cornerback.

The entire draft is extraordinarily unpredictable this year, but Thibodeaux is the biggest individual “wild card” of the event with a range from Detroit in the No. 2 slot to dropping out of the top ten altogether. I’ll say Baltimore—with two third-rounders and five fourth-rounders—moves up for the talented pass rusher.

Kansas City fans would be thrilled, and every other fanbase would be furious that the league allowed this to happen. But the Falcons feel like they might be playing for the 2023 quarterback class, and a drop of 21 spots would bring a hefty return for the future (even if it’s from a team projected to pick in the late 20s). Taking the fifth-year option into consideration, Williams would be on his rookie deal through the age-31 season of Patrick Mahomes.

Although he could end up going as high as No. 1 overall, Ekwonu is a perfect fit in Seattle based on his power and mindset to dominate in the running game. I think he can “fall”—compared to media expectations—based on some of the concerns as a pass protector in an increasingly pass-happy league.

Johnson to the Jets sounds like it could be in play at No. 4, and the possibility of a Deebo Samuel trade hangs over this selection. Garrett Wilson or Drake London—both loved by NFL Network’s Daniel Jeremiah (a close friend of Joe Douglas)—are also possibilities, but the Robert Saleh surely wants to continue improving what was by far the worst-ranked defense in the league last year.

While head coach Ron Rivera attending the Ohio State Pro Day is notable, London is the best natural complement to Terry McLaurin, and a big-bodied target is a better fit for Carson Wentz, too. London can also play the slot if Washington hopes to have second-year wideout Dyami Brown step up as a deep threat on the outside.

McDuffie’s below-average arm length is something the analytically driven front office of the Vikings might be against, but there is enough smoke around the pairing to think it could happen. Overall, Minnesota doesn’t have many glaring holes aside from younger options to join Patrick Peterson and Harrison Smith in the secondary.

Yesterday, it was again reported that Dallas is eager to trade up, and Davis could be a guy to elevate the entire defense. NFL Defensive Rookie of the Year Micah Parsons was all over the place to begin with in 2021, so imagine how much havoc he can cause if “Godzilla” is commanding blockers in the trenches.

A fall even beyond this for Hamilton wouldn’t be a surprise, but the Giants end it by going best player available in their eyes. Hamilton can be the long-term running mate for Xavier McKinney on the backend of a defense that might not too far from being a top unit if they hit on a pass rusher in a deep class.

Carolina has two primary holes at quarterback and left tackle, and it doesn’t sound like they are ready to give up on Sam Darnold. That said, a couple of turnover-filled games early on in 2022 could spell the end of Matt Rhule’s tenure if hope looks lost, and Pickett is a better player than many in the media want to believe.

The Saints are arguably the best drafting team in the league, so I don’t exactly feel sold on this pick with more of a second-round grade on Penning. Some of the gambles for New Orleans have been bets on traits, though, and the six-foot-seven offensive tackle is a rare athlete for the position.

This isn’t a connection that I’ve seen because the Ohio State star usually goes higher than this, but Justin Herbert having a trio of Mike Williams, Keenan Allen, and Wilson gives him all the ammunition needed in the AFC West. I’d say Jameson Williams or Jordan Davis would be the dream target if they fell.

Elam being viewed more favorably by NFL teams than the media isn’t a surprise, and Buffalo is said to be interested in moving up. His ability to play both man and zone coverage­ is a great fit for Sean McDermott’s secondary with Tre’Davious White coming off a torn ACL.

Olave will threaten the defense on the second and third levels, which makes him a great pickup for an offense that will mostly revolve around Alvin Kamara and Michael Thomas. We’ll see if the former Buckeye standouts end up coming off the board closer to the top ten like most are anticipating.

Pittsburgh doesn’t exactly hide their intentions when it comes to draft selections, and both Mike Tomlin and soon-to-be-retired general manager Kevin Colbert were front and center at the Liberty Pro Day. Willis would be able to learn behind Mitchell Trubisky (who notably has a similar play style) for at least one year if necessary.

Walker is now heavily favored to be a Round 1 selection and has been getting top-20 talk this week. New England needs to add young talent at linebacker, and even if I personally believe Nakobe Dean is clearly the best option at the position—and a top-three talent at any position—it doesn’t sound like the NFL agrees.

Picking out a wideout for Green Bay to target—whether it be trading up or staying put—is one of tonight’s biggest mysteries. Burks can handle a chunk of designed touches in Matt LaFleur’s offense while also having the ability to stretch the field with an impressive downfield skillset.

He still wants a new contract, but fences have started to mend between Kyler Murray and the Cardinals, and the former No. 1 overall pick obviously believes he needs more help. Dotson is a dynamic weapon with glue for hands and big-time toughness to pair with his speed and route running.

When writing the scouting report for Booth Jr., he felt like the prototype cornerback to play in Lovie Smith’s defense. A trade back into the 20s makes this a much better value for Houston than it would have been at No. 13, and their new head coach gets his wish of a top corner.

Philadelphia can still go wideout with their second selection, but the lack of depth at defensive tackle in the class makes it difficult to pass on Wyatt. As a rookie, the athletic and powerful defender would rotate alongside Javon Hargrave and Fletcher Cox on the interior.

Cincinnati head coach Luke Fickell is close friends with Mike Vrabel (they were teammates at Ohio State), and Tennessee is a sneaky franchise that could target a quarterback tonight. Ridder has the experience and leadership qualities to be the long-term answer while becoming a more consistent passer developing behind Ryan Tannehill in 2022.

Green versus Zion Johnson will be an interesting debate for teams, but I give the edge to the SEC prospect—who would slide in at left guard to complete Tom Brady’s offensive line. The versatility with high-level play shown on the blindside increases Green’s value for the championship-hopeful Bucs.

Although the Packers don’t have a pressing need on the edge with Rashan Gary and Preston Smith, one injury late in the season could be a huge blow for their Super Bowl chances. Karlaftis is comfortable rushing from either side of the formation and is also a very good run defender.

Quarterback will be a popular position for Atlanta to target, but as stated, I think they might have their eye on next year’s class. Lloyd could be available in the late stages of the first round because of his age (turning 24 in September) and the general devaluing of linebackers around the league.

Mafe would immediately step into a full-time role for the Chiefs, and his presence can keep Chris Jones inside where he’s been much more of an impact player. If the team decides to wait for an edge, Washington cornerback Kyler Gordon would be a good bet here.

Linderbaum is likely to slip deep into Round 1, and Cincinnati should take advantage if he’s on the board for them. Not only would Linderbaum be a long-term anchor for Joe Burrow, but he’d also be an excellent fit leading the way for Joe Mixon in open space.

It’s unbelievable that Dean could fall even beyond this selection based on media reports, but I could see Dan Campbell loving everything he’s about as an impact defender to join Aidan Hutchinson. Assuming they have a strong draft, don’t sleep on the Lions in 2022.