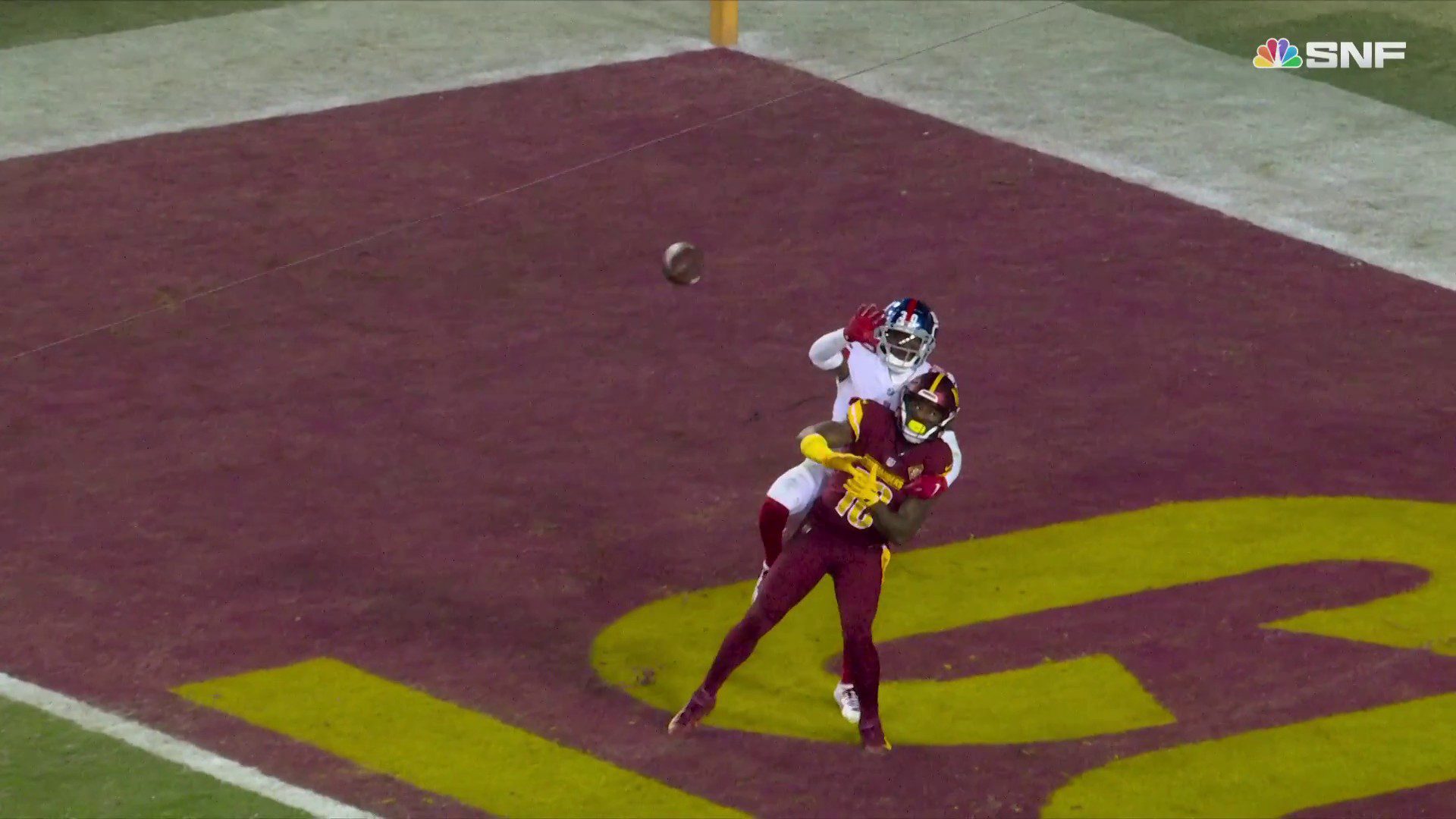 
There’s still one game to go tonight at historic Lambeau Field, but Week 15 of the 2022 NFL season was seen as one of the best of the year. It was highly entertaining and memorable, and Saturday included the biggest comeback in NFL history by the Vikings (33 points against the Colts). Things typically become more entertaining when Thanksgiving hits, and this season has been no different. But unfortunately, poor NFL officiating has overshadowed much of the year for those that pay close attention to the game.

Take the final moments of the Giants’ win over the Commanders on Sunday Night Football to conclude the day. First, a Brian Robinson Jr. touchdown was taken off the board because of an illegal formation penalty, with Terry McLaurin not lined up on the line of scrimmage.

Terry McLaurin looks at the ref asking if he’s good – ref points back at McLaurin as of to indicate he’s good. McLaurin then gives a thumbs up to ref to acknowledge it. This “penalty” took a Brian Robinson TD off the board. Via @SNFonNBC pic.twitter.com/B86N6nsJsS

However, McLaurin checked twice with the side judge, and it appeared the side judge told him to move up, which he did. Apparently it was not enough, and the flag was thrown immediately at the snap. It felt a bit arbitrary (though to be fair, it did look like McLaurin was lined up too far off the line). And McLaurin himself said that he was told he was “good”:

Two plays later, it looked like Curtis Samuel was interfered with on the last chance for Washington.

Was this pass interference? 👀 pic.twitter.com/hUL5WIKZPV

Now, the Giants outplayed the Commanders throughout the game and very well could have won last night regardless. Also, I am fine with letting guys play at the end of games, and the potential interference on Darnay Holmes wasn’t that egregious that it was a must-call. But again, this comes to the arbitrariness and inconsistency of officiating. All teams and their fans can ask for is consistency in how a game is called.

The end of last night’s game was no isolated incident. Things were even worse earlier in the day during the Patriots’ tough loss to the Raiders. With Vegas looking to drive for a game-tying touchdown, a 30-yard pass from Derek Carr to Keelan Cole in the corner of the end zone was ruled a touchdown.

Walt Anderson's explanation for upholding the Keelan Cole touchdown leaves something to be desired. pic.twitter.com/3Ewr5ASWH6

Many fans aren’t going to be upset about a franchise with six Super Bowls not having some things go their way. But the Patriots have arguably been robbed in two separate games this season, with what looked like a Hunter Henry touchdown catch not counting in a tight loss at Minnesota on Thanksgiving Night.

This was ruled an "incomplete pass"

Dialogue on what constitutes a catch in today’s NFL—and whether the NFL even knows themselves—can be a volume of its own, but it’s well documented and I won’t go deeply into it here.

And in last year’s Super Bowl, the Bengals might have defeated the Rams if not for a phantom holding call against linebacker Logan Wilson:

Overall, there’s a lot on the line for players, coaches, executives, team owners, and fans every game. Every single week and game mean a ton in a league as competitive as the NFL. It should also be noted that since the wide legalization sports betting—which the NFL heavily leans into itself—more mainstream money is at stake for gamblers, too.

Solutions are simple. All NFL officials should be full-time employees, and more camera angles (particularly down the sidelines, end lines, and at the goal line) should be added. That’ll cost the NFL more money, but they added a 17th regular season game (arguably unnecessary) and an extra playoff team, so there’s enough to go around.

Poor and inconsistent officiating is costly, and it leads to fans losing trust in the game and for theories of game-rigging to emerge. Sometimes, it’s hard to totally discount so-called conspiracy theories with so much money at stake in Vegas.

The NFL had some major highs this weekend and is as popular as ever. Thanksgiving just delivered the most-watched regular season game ever recorded. Hopefully the lows of inexcusable officiating don’t catch up to them at some point.