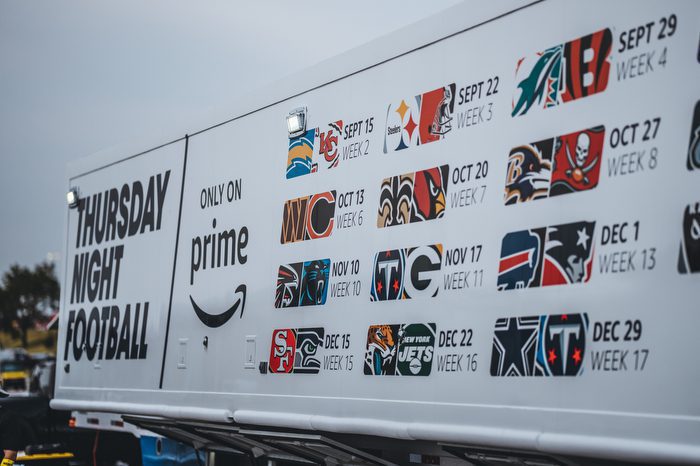 
The NFL coming to Black Friday has long been rumored, and now it’s a reality. The league and Amazon have announced that Prime Video will stream a “Black Friday” game in 2023. The game will broadcast on Friday, November 24, 2023.

The press release reads in part:

NEW YORK—October 18, 2022—Amazon and the National Football League (NFL) announced today that in 2023, Prime Video will exclusively stream a newly scheduled “Black Friday” game the Friday after Thanksgiving Day. The first-ever NFL “Black Friday” game will take place Friday, November 24, 2023 with an expected kickoff time of 3 p.m. EST. The participating teams will be announced when the 2023 schedule is released.

“Thanksgiving is synonymous with football, and we’re excited to give our fans another day of NFL action during this holiday weekend,” said Hans Schroeder, chief operating officer for NFL Media. “Amazon is uniquely positioned to partner with us for this game as ‘Black Friday’ is one of the most important days of the year for their business.”

“Thursday Night Football has already proven tremendously successful on Prime Video, delivering millions of viewers every week, and we’re excited to expand our relationship with the NFL with the inaugural ‘Black Friday’ game, starting next year,” said Jay Marine, global head of sports, Prime Video. “’Black Friday’ is the unofficial start of the holiday season, and we’re thrilled to kick it off with a gift for football fans across the country with this new game.”

“We are gratified by the NFL’s support, and by the incredible reaction we’ve had from viewers to our broadcast, and are thrilled to give fans another game with Al, Kirk, Kaylee, and the entire TNF crew on ‘Black Friday’ in 2023,” said Marie Donoghue, vice president of global sports video, Amazon.

It had been expected that the NFL would insert a Black Friday game on Amazon starting in 2023, and the full expectation is that a Black Friday NFL game will be an annual occurrence.

The NFL revolves largely around the holidays. The league basically owns the Thanksgiving holiday, and games are sometimes played on Christmas Eve and Christmas Day. Halloween obviously also always falls during football season. This move makes a ton of sense, with the NFL taking over Black Friday and the unofficial start of the holiday season. It’s easy to envision a yearly tradition of fans putting up holiday decorations while watching the NFL, by far the United States’ favorite live television show.

Also, NBC currently has the nightcap on Thanksgiving (skipping a week of Thursday Night Football on Prime Video), so holding a game on Black Friday gets Amazon another opportunity in a relatively limited schedule compared to the other networks.