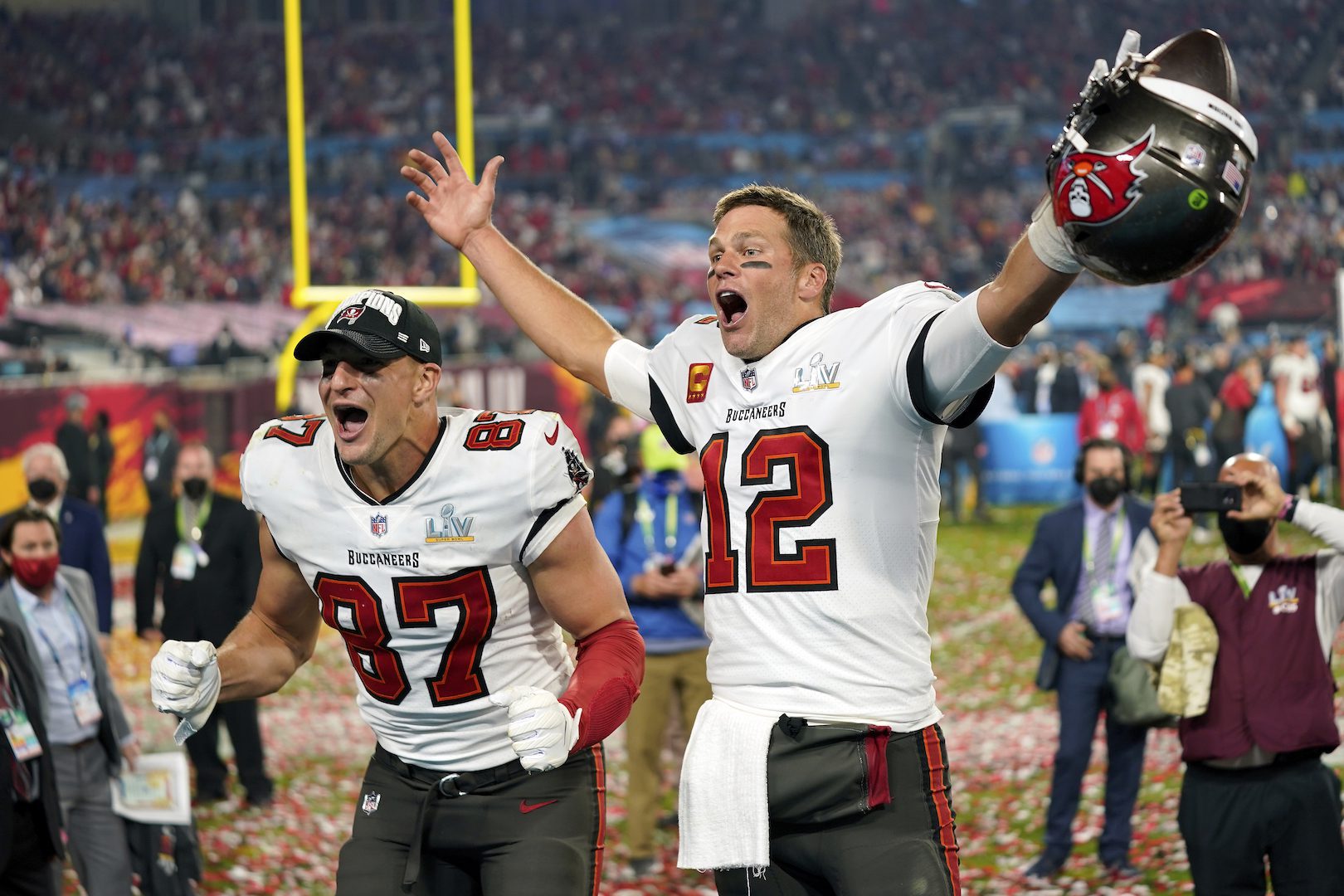 
Former Patriots and Buccaneers star Rob Gronkowski, widely considered the best tight end in NFL history and the long-time trusted target of Tom Brady (the only quarterback he played for), has officially announced his retirement. While it wouldn’t be shocking if Gronk eventually returned (maybe as early as late-August if he gets the itch the play and doesn’t have to participate in training camp), we’re considering him done playing—and a lock to be a first-ballot Hall of Famer in 2027. So, it’s time to highlight some of the greatest on-field moments in Gronkowski’s career. [NOTE: The NFL does not allow its videos to be played on websites, but you can view the highlights by clicking each link of the top ten.]

Super Bowl LII was a disappointing shootout loss for New England, but Gronk did his part, scoring twice including a go-ahead touchdown in the fourth quarter. The way Gronk played should not be forgotten despite the loss to a red-hot Eagles squad.

9. Dangerous flip into the end zone

On Monday Night Football in 2011 (Gronk’s best statistical regular season, with 90 receptions for 1,327 yards and a tight-end record 17 touchdowns), the monstrous tight end went off for 96 yards and two touchdowns—including a 52-yard catch-and-run score and another touchdown where he flipped into the end zone and landed badly on his head/neck. Thankfully, Gronk ended up being OK and didn’t miss any games, and it gave a glimpse of how hard he always played.

8. One-handed catch against the Broncos

The highlight alone looks awesome, but this catch from Gronk was totally jaw-dropping when it happened live. Brady was even stunned and wondered how his guy caught it.

Coming off another Super Bowl victory, Gronk helped start 2015 off right for the Patriots, scoring three touchdowns versus the rival steelers on the NFL’s Opening Night.

6. Takes over against the Steelers

Like all teams, the Steelers really didn’t have any answers for Gronkowski, who hit them again with a big performance a couple of seasons later. Gronk was superb all evening, but he really took over on the final drive, with three chunk catches to get into position for the go-ahead touchdown (while adding a two-point conversion himself on top of it)

Again, part of what made Gronk special was that he showed up in the biggest moments. It was ultimately in a losing effort, but Gronk did everything he could to help the Patriots try to comeback against a tough Broncos team in Denver in the 2015 AFC title game.

4. “Out of the club” game versus the Colts

Gronk’s unmatched catch-and-run prowess at tight end was on full display against the Colts in 2014. But the most memorable moment of the night was when he had enough of the Colts’ supposed trash talk.

3. Final catch as a Patriot in Super Bowl LIII

The Patriots-Rams Super Bowl was a low-scoring matchup, and Gronk wasn’t in his typical role as a high-volume receiver at this stage in the year, but he came up when his team needed it most, putting New England in position for the lone touchdown of their sixth Super Bowl victory. It should be noted that Gronk had a key fourth-quarter reception versus the Chiefs in the AFC Championship that year, which also could have been included in the top ten.

Super Bowl XLIX wasn’t an enormous statistical game for Gronkowski, but he had a clutch touchdown with under a minute remaining in the first on a go route and ultimately played a huge all-around role in the Patriots defeating the “Legion of Boom” defense.

After so many unforgettable moments in New England, Gronk’s most memorable single-game performance was probably in his last Super Bowl with his second team. With another sensational tight end and team on the other side, Gronk caught two touchdowns in the Big Game to cap his first season in Tampa Bay. Gronk caught 16 touchdowns in his two seasons with the Bucs and had plenty of good games and moments, but Super Bowl LV obviously stands out. With it, Gronkowski joined the legendary Jerry Rice as the second player in history with two games of multiple touchdown catches in the Super Bowl.