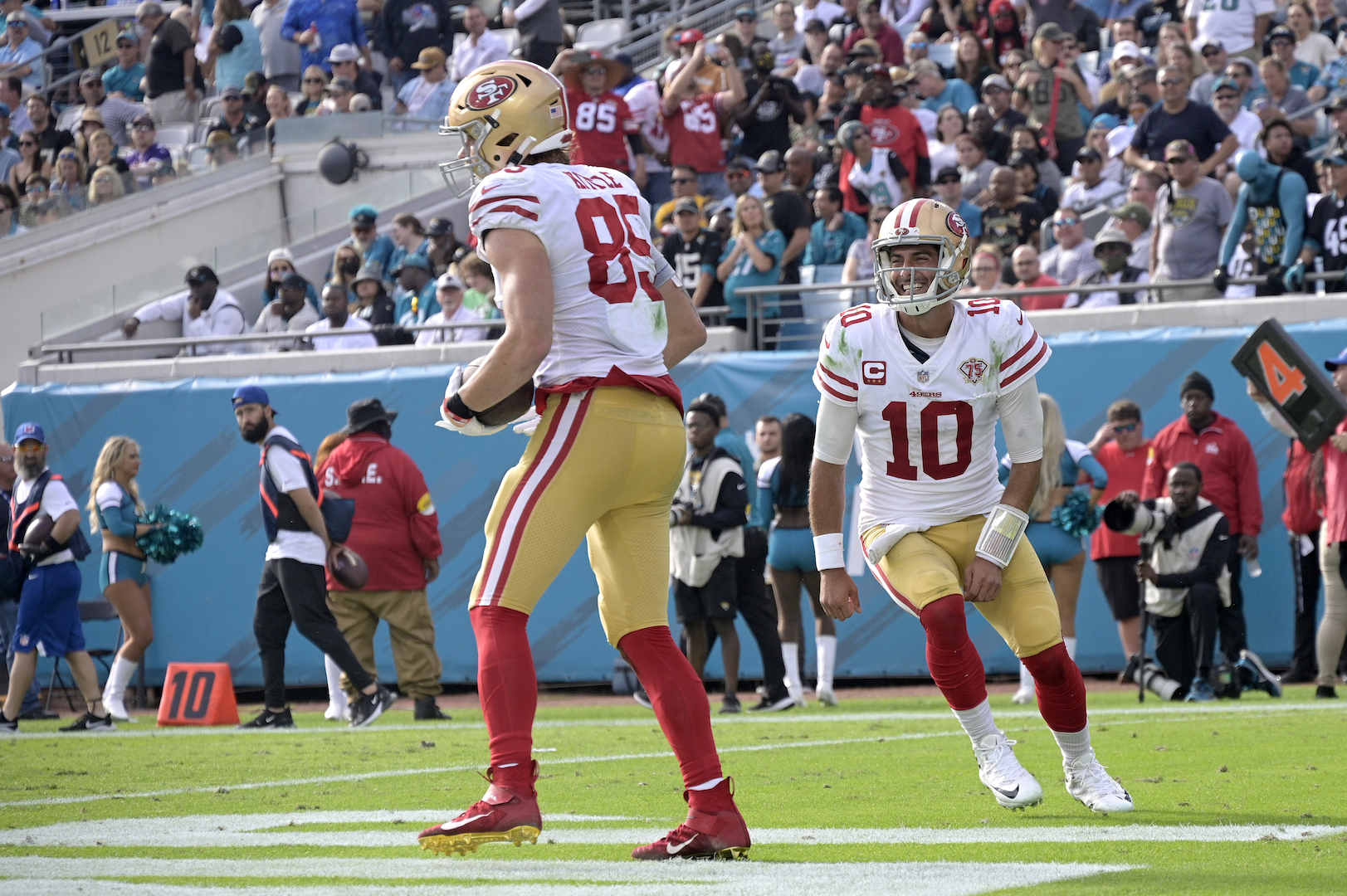 Lamar Jackson is the big one here, as he’s apparently not interested in signing a long-term extension with the Ravens quite yet (perhaps hoping to stay healthy and have another monstrous season like his MVP campaign before hitting the jackpot). However, there are others to keep an eye on, including Chiefs offensive tackle Orlando Brown Jr. (who must play the year on the franchise tag) not reporting for the start of camp. Also, Seahawks wide receiver DK Metcalf is in the final year of his rookie contract, and it would not be a surprise if he’s traded if negotiations do not go well this summer.

Most notably, the second-year quarterbacks are the young signal callers to keep an eye on over the next several weeks. No. 1 pick Trevor Lawrence goes from a very tough situation last season to Super Bowl-winning head coach Doug Pederson, who had success helping Carson Wentz develop in Philadelphia; I love what Lawrence showed in the regular season finale upset over the Colts and believe he will take a major step forward in Year 2.

Zach Wilson got an upgraded supporting cast with the Jets and is under a lot of pressure to make a leap closer to the playoff mix. Bears quarterback Justin Fields should benefit from a full camp as the starting quarterback, but he is in a tougher spot than Wilson, as Chicago arguably got worse around him on offense—though the connection between Fields and Darnell Mooney is something to monitor. Fields showed big-time flashes in 2021, but both he and Wilson must be more consistent as they look to show they are clear franchise quarterbacks for 2023 and beyond.

And finally, No. 3 pick Trey Lance is locked in as the Niners’ starter after getting his feet wet a bit as a rookie when Jimmy Garoppolo missed time. The sentiment surrounding Lance is that the sky is the limit given his dual threat ability, and it’s interesting that I’ve heard Hall of Famer and 49ers legend Steve Young say that Lance is extremely smart and that his current potential weakness (but something that can be improved) is the delivery of the football. Remember, Lance only played one game during his final college season in 2019 (due to COVID), so he hasn’t played a ton over the past couple of years.

Mac Jones is also in the category above, but I’d say he already looked almost like a veteran quarterback while helping lead the Patriots back to the playoffs as a rookie. Despite the stellar rookie campaign, Patriots head coach Bill Belichick says there’s been a “dramatic improvement” for Jones from last year. I’m very intrigued by how New England’s offense will look, as they’ll be going without an offensive coordinator. While I think that Belichick’s involvement on offense might have been discounted over the years, many expect he’ll be as involved as ever after offensive coordinator Josh McDaniels left for the head coaching job in Vegas. With Rhamondre Stevenson, Nelson Agholor, Kendrick Bourne, Hunter Henry, and Jonnu Smith all entering Year 2 of the Patriots system along with Jones, the possibilities are exciting. An improved Jones could lead to more on his shoulders, and the ability to shift the gameplan week-to-week from a super pass happy attack to a run-heavy approach—and anything in between—more often and more seamlessly.

This one is pretty simple. The Lions will be on this summer’s edition of Hard Knocks on HBO, and it should be a great watch for football fans. The Lions are a squad I feel can make a leap in 2022, and they’ll have notable players to track including quarterback Jared Goff (who was on Hard Knocks before with the Rams) and first-round rookie receiver Jameson Williams. And head coach Dan Campbell should deliver memorable moments and soundbites throughout camp.

I believe Baker Mayfield will be the Panthers’ Week 1 starting quarterback when they face Mayfield’s former Browns team, but Matt Rhule runs the type of program that’ll make him earn it. While it’s a new offense under Ben McAdoo, Sam Darnold has a year of chemistry with the players on Carolina’s roster, so that’s something in his favor. But Mayfield helped the Browns get to the playoffs just a couple of seasons ago, and the Panthers are looking to ride a similar formula to a Year 3 leap under Rhule. Mayfield and Darnold will likely get most of the first-team reps, but keep an eye on third-round rookie Matt Corral as a potential wild-card in the competition. I like P.J. Walker too, but he might ultimately settle in as the backup quarterback if Mayfield wins the starting job and Carolina parts ways with Darnold—with Corral as the No. 3 if he doesn’t win the starting job outright.

Gone is Tyreek Hill (an insanely fast weapon on offense but someone that’s left and criticized his former team, so we’ll see how much of a loss he’ll be). Added to the receiving group for the Chiefs were JuJu Smith-Schuster, Marquez Valdes-Scantling, and second-round pick Skyy Moore (as well as former Buccaneer Ronald Jones at running back). I also really like second-year receiver Cornell Powell, who has a year of experience in the organization under his belt. The question becomes who emerges as the top targets for Patrick Mahomes, as this will obviously be a major factor in the NFL this season given that the Chiefs are expected to be in the title mix again—and it’s also something for fantasy football players to keep an eye on.

There aren’t many open competitions at quarterback this season, but the Steelers are one of the league’s top franchises and will have a new quarterback for the first time since Ben Roethlisberger was drafted in 2004. Mason Rudolph is an incumbent option and has a winning record as a starter, but the Steelers signed former No. 2 overall pick Mitchell Trubisky this offseason and then drafted Pitt product Kenny Pickett with their first-round pick. I believe that all three guys could do a nice job under center for Pittsburgh, and preseason action might be key. Ultimately, Trubisky gets way too much flak from hateful people on social media, and the year in Buffalo was probably a major benefit for him—his upside and experience might win out for 2022 as the Steelers move forward at the game’s most important position.

As camp begins, the season gets closer, and injuries unfortunately strike, the trade market typically gets hotter throughout the summer when teams determine what pieces they might need to add to contend. We touched on Metcalf earlier, but trades can come out of nowhere if teams keep talks quiet. Bengals safety Jessie Bates III has been speculated as a potential trade option, but other high-profile names can suddenly be on the move in today’s NFL. Among the most obvious guys that come to mind as trade options are Jets wide receiver Denzel Mims, 49ers running back Trey Sermon, and one of the Browns’ running backs not named Nick Chubb.

Christian McCaffrey, Chris Godwin, Danielle Hunter, Chase Young, Jameis Winston, J.K. Dobbins, Odell Beckham Jr., Travis Etienne, Michael Thomas, Michael Gallup, Gus Edwards, Robert Woods, and Irv Smith Jr. are among the players coming back from major injury. Keep in mind that teams are not required to give injury updates until the regular season begins (and even then, players not on the active roster are not included on official practice reports), but we’ll all be looking for clarity ahead of the second week of September.

Finally, the status of former 49ers starting quarterback Jimmy Garoppolo is probably the biggest storyline to watch this summer. Jimmy G gets some hate on social media and from some of the regular sports media, but he’s helped his team get to two of the past three NFC title games and has proven to be someone that’ll make fearless, pinpoint throws late in games. I continue to contend that Garoppolo’s ability to put throws on the money to where his receivers can catch and run without breaking stride was a massive factor in Deebo Samuel’s success last year. Anyway, Jimmy G has good experience and has played in big games, and I think he’d be an awesome acquisition for a potential contender. The Browns come to mind if and when Deshaun Watson is suspended indefinitely. The Niners would probably prefer to trade him elsewhere, but the division rival Seahawks might be the ultimate landing spot—and they would offer a nice formula to compete and surprise people in 2022 if they can run the ball with Rashaad Penny and Ken Walker III and play strong defense.