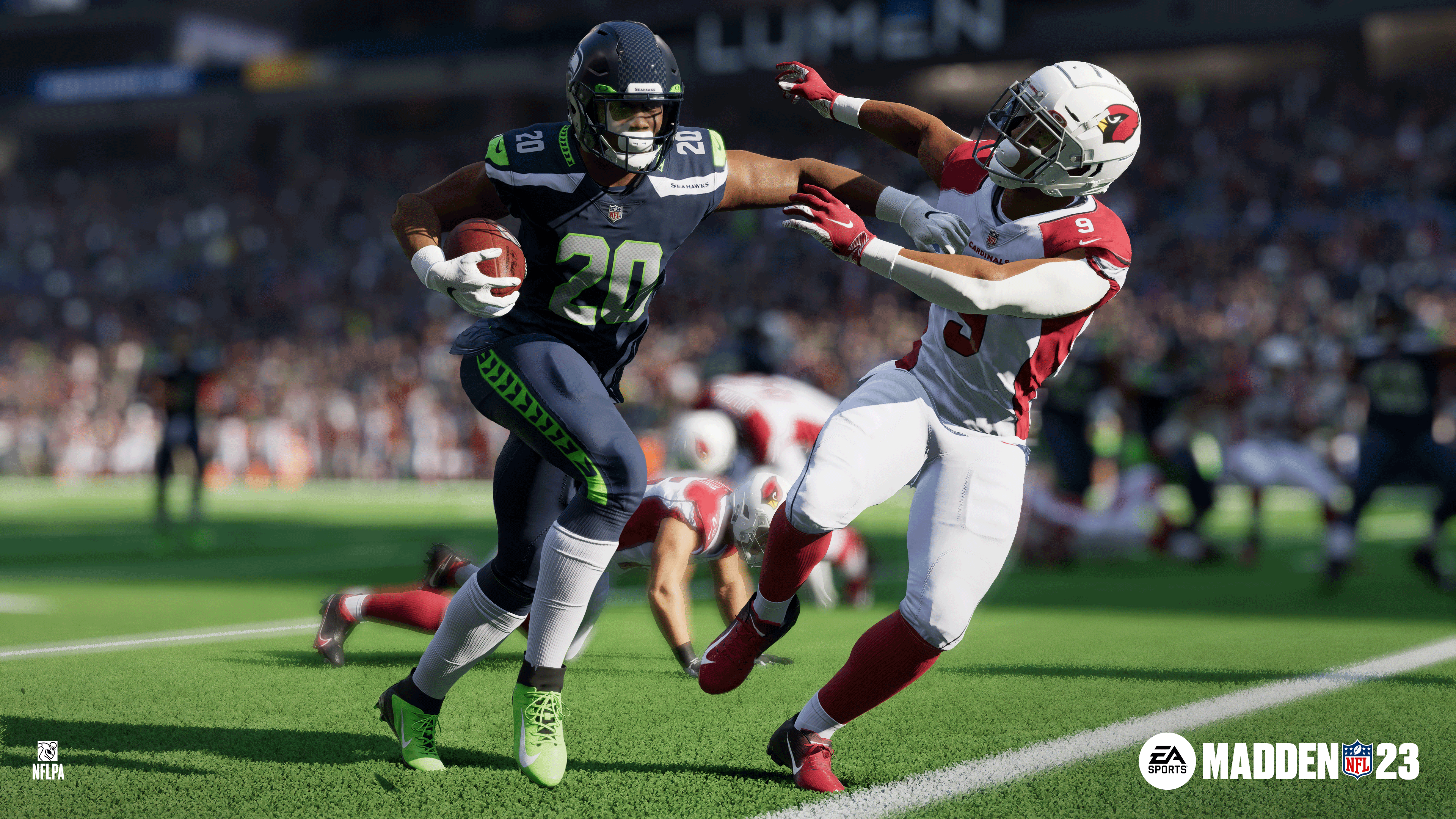 
As was the case last year, the glaring issues with Madden NFL 23 need to be immediately addressed before diving into the review. Basically, the technical bugs have reached a level never seen before (at least in my experience), though not everyone has been impacted, so some users might be lucky.

For me, I’ve experienced delayed/missing rewards for Ultimate Team challenges (apparently a common bug), Ultimate Team progress not being tracked (ex: completing objectives and it says they are incomplete), zoomed-in screens when opening a pack, a missing Rookie Premiere token, and the Skills Trainer failing to give rewards along with a continual pop-up about earning a pack after every drill (rather than at the end of each section).

That is not even to mention the spelling mistakes and other bugs that I’m sure will pop up when advancing deeper into Franchise Mode and other parts of the game. On the bright side, glaring bugs are usually patched by the worldwide launch (i.e.), so we can only hope those who get their hands on the game this weekend are greeted with a smoother experience.

The Legacy of John Madden

Before getting to different sections of the review, EA deserves credit for celebrating the legacy of Hall of Fame coach and broadcaster John Madden in the first release of the game since his death. At launch, you jump right into “The Madden Legacy Game” featuring a matchup between the NFC and AFC that includes the favorite players of Coach Madden—including guys like Brett Favre and Barry Sanders.

Throughout the game, the broadcast discusses Madden’s legacy, and it includes snippets of what he’s said about players in the past—for example, his praise of Tom Brady if you choose to use the AFC squad. It’s certainly worth playing the entire game and watching the halftime and postgame sequences to honor Coach Madden’s legacy. (Just try to avoid throwing at Jalen Ramsey, as that cost me the game.)

“FieldSENSE” is the big update to gameplay for Madden 23, as it’s essentially a new system to make everything feel more realistic.

To me, the best part of FieldSENSE is the new Skill-Based Passing. I’d be lying if I said the upgraded passing mechanic has already been mastered—as it’s something I’m still trying to completely grasp in terms of all the controls and options. That said, there is a tutorial to at least familiarize yourself with it some, and I feel like my passes have naturally taken advantage of the new system by pulling receivers away from defenders/coverage. With more experience, the Skill-Based Passing should become the standard for creating a more true-to-life passing attack. Even if you struggle early, my advice would be to stick with it.

The other primary categories in FieldSENSE are Hit Everything, 360° Cuts, and WR vs. DB Battles. For the Hit Everything system, it allows the tackling and player movements to feel more realistic, including mid-air collisions, better engagement at the point of attack, and advanced gang tackles.

Aside from the FieldSENSE changes, I’m mostly a fan of the improved ability to contain mobile quarterbacks. We’ll see how that goes when jumping into online play, but hopefully the days of Lamar Jackson or Kyler Murray being unstoppable are over.

Also, something I noticed in competitive online play is that with Skill-Based Passing, I would still like the ability to have receivers sit down more in routes against zone coverage. I find myself using the total control passing while hoping a receiver will basically sit down his route, but that unfortunately is not possible.

In general, there is still much that can be upgraded for those that want realistic, simulation gameplay, but Madden 23 is a step in the right direction.

If you paid attention to Gridiron Notes or videos released by EA in the leadup to Madden’s release, there probably isn’t much to talk about for Franchise Mode.

For those unfamiliar, new additions include an updated Free Agency system, which accounts for things like championship hopes, market size, and joining a hometown team when players hit free agency. Overall, it definitely adds a layer of realism to the mode, and contracts—while not perfect—were also improved to make it a more immersive simulation experience.

Scouting Updates was another significant addition to Madden 23, but I’d say it falls a little flat. To be fair, there isn’t much you can do about scouting (it’s not like watching tape of a fictional player would be a fun or realistic option), and the attribute “reveals” being more position-specific helps streamline the process. Maybe the return of NCAA Football next summer will lead to a collaboration that allows you to import draft classes (perhaps more accurate and undoubtedly less time-consuming than the current option of custom draft classes).

There still needs to be an improved trade system to complement the changes for free agency and the draft, but hopefully that’s on the docket for the future. Personally, I’d like to see the option to be a general manager added instead of simply being an owner or coach. Isn’t being the GM of your favorite team the dream of most football fans?

Face of the Franchise

I haven’t gotten deep into Face of the Franchise with more interest in regular Franchise Mode and Ultimate Team, but starting as an overlooked veteran rather than a rookie is a fresh change. Instead of getting drafted, you get to choose your team from the jump, and I’ll be starting a quarterback build with the Commanders or Seahawks at some point to see how it goes. I think it’s still a little thin in general compared to other career modes in sports video games, but the advantage Face of the Franchise has is shorter seasons (being the NFL) to play through an entire career at a realistic pace. Oh, and being a cornerback is now an option in addition to QB, RB, WR, and LB.

For Ultimate Team—by far the most popular mode in Madden—the changes are notable compared to previous years, and it’s a step towards what I’d like to see out of the mode. The new “Field Passes” are comparable to “Programs” in MLB The Show, which allows players to progress and earn XP/rewards tailored to however they want to play.

For example, those that play H2H Seasons will be keying on the Competitive Field Pass, while someone that wants to simply collect cards and build a team through solo challenges will progress with the Season 1 Field Pass.

My big gripe with the mode continues to be a significant one—with the rating system watering down all the players. Sticking with the MLB The Show comparison and their Diamond Dynasty mode, Madden has Core Elite/Gold/Rookie cards that make up the base players of the game, with the best options topping out at 88 overall. In Diamond Dynasty, the base players have ratings that reflect their real-life ratings (for example, if Mike Trout is a 97 OVR at launch, he’ll immediately have a 97 OVR in DD). Then, if Trout were to have his ratings increase or decrease based on his real-life performance, his DD card would reflect that change.

I frankly don’t see why EA is against this change being made, as profit is obviously the main objective, and I’m sure people would still spend just as much money on packs—and perhaps even more money—if there are cards released at launch that can be useful by the end of the game’s play cycle. As things are currently set up, the best cards in the game (like an 88 OVR Josh Allen) will be useless for most teams in a matter of weeks. Plus, it’d take some scouting skill for users to “invest” in players they believe might take a leap—creating even more buzz, helping out the “no money spent” folks, and creating more interest in actually watching NFL games for those that might be more of a gamer than a real-life football fan.

There should be no concern about too many highly rated players early in the game if this system was put into place, as there would still be various Program cards—from holiday promos to playoffs promos to Gold Tickets—and I think it would be a good idea to add more Flashback (ex: Tom Brady’s 2007 season) and Rookie cards (which don’t currently exist) with stable ratings to create different versions of various players.

The technical bugs were discussed in the opening, but there are still other problems that should be pointed out (with some others I’ll surely pickup on after this review). First of all, the ratings continue to be laughable, and that will be the case until EA decides to put more importance on finding a person or people that know what they’re talking about to create the ratings.

Also, the player builds look worse to me than they have in the past for certain players. Just for the Eagles defense, Jordan Davis’ hair looks terrible, and Fletcher Cox seems to have the same awkward lower-body build as Brandon Graham. In some areas, the strides are clear, but for other areas, the game still looks like it could be from 2010.

The legacy issue that continues to annoy me to no end every year is the game clock ticking to 1:59 instead of 2:00 at the two-minute warning if the play clock accelerates to the break. There is simply no excuse for that to continue happening, but it’s been years with no fix from EA.

Finally, the menus feel a lot slower—after being a clear strength in Madden 22—so hopefully a server update somehow leads to an improvement.

Overall, Madden NFL 23 is another step in the right direction, but bugs drag the experience down, and there are still significant changes to be made—from gameplay to game modes—that would fully honor the legacy of Coach Madden with a simulation football experience.