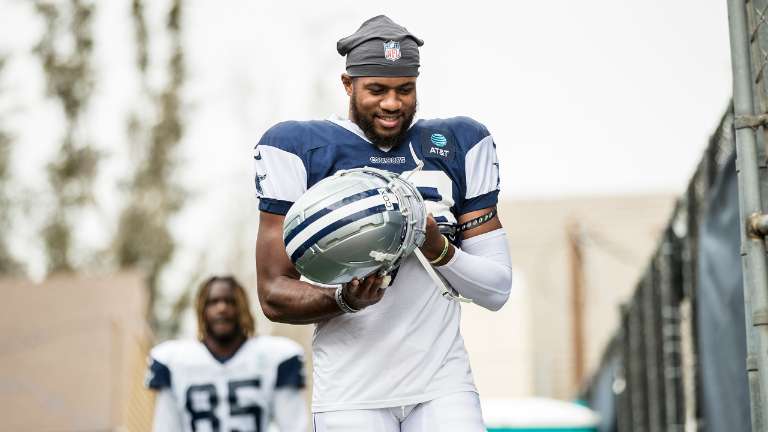 The only downside is the show/shot not being in 4K, but there seems to be a consensus that this was one of the coolest things in Hard Knocks history:

It actually turned out to be a funny sequence (“one and one”), but I couldn’t look at the screen without my eyes tearing up when Hardy was first putting in his contacts—the close-up shot could have been straight out of a horror movie. Also, as someone that wears contacts, it was definitely a bit annoying to have teammates hover over him on the sideline during the actual process of Hardy trying to get the contact in his eye (making fun of him afterwards was fair game).

A FaceTime call between Trevon Diggs and All-Pro brother Stefon Diggs at some point this season was a complete lock—but what I didn’t expect was for the show to be absolutely stolen by another family member in Aaiden Diggs. First, Trevon’s young son was doing poses in the background during the call with Stefon, then he hilariously impersonated his dad and uncle, was laser-focused on meeting Patrick Mahomes (instead of Dak Prescott), and insisted he would play tackle football rather than flag.

Prescott started off a rant by talking about how he used to be scared of people in costumes, and it transitioned into his hate for haunted houses by saying they are “the perfect place to kill somebody.” He actually makes a good point in wondering why people would enjoy it, and his logic led to his mom never making him go through with any haunted attractions.

The first two weeks of this season frankly weren’t very good, but Aaiden single-handedly put the show on his back by leading what was arguably one of Hard Knocks most memorable episodes. Aside from the early introduction and impersonations, Aaiden was laugh-out-loud funny watching his dad (and calling him “Tre”) from the stands, including the high-pitched scream. It was also great to see his reaction when Trevon gave a “thumbs up” after his night was done.