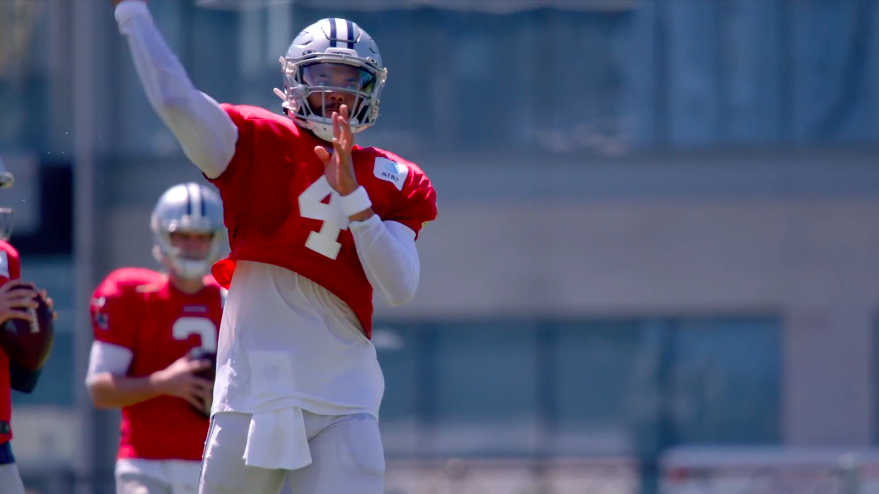 Last night’s episode was unfortunately a step back after a strong showing in Episode 3, and it’s difficult to pick out a best moment. That said, I’ll go with Jerry Jones in the credits scene where he kept bringing up his love for Whataburger—it showed how much of a salesman the Cowboys owner is, and most should agree with his view of the original taste being the best way to eat whether or not it’s cold.

Vaccinated players testing positive will clearly be an issue all season, and players/coaches missing games feels like it will somehow be more frequent than it was when the pandemic was raging on last fall. A case could be made to stop testing altogether (unless someone wants to be tested) and to no longer require masks (unless someone wants to wear one). If not, COVID procedures may never go away.

The look on Micah Parsons’ face—almost as if he got away with something—when running off the field after a jersey swap with No. 1 overall pick Trevor Lawrence was priceless, and the Dallas rookie has continued to be a bright spot on Hard Knocks. Also, you have to see the picture of the actual jersey swap if you haven’t already because of Dak Prescott hilariously watching like a proud father in the background.

The best parts of last night’s episode were probably all the “little” moments like the close up of the dog Simba, someone (who might have been Zeke) stepping out of a car with crocs, and DeMarcus Lawrence coming into the defensive line room with Tarell Basham was impersonating him, but one that many might have missed was Elliott chilling in the quarterback room when everyone was talking about the pylon game; it was just funny to see the star runner there in a basketball jersey.

“That boy is smooth, son.” – talking about Trevor Lawrence

Hardy was again featured in Episode 4, and he was presented with a big opportunity—and seemed to take advantage of it in the preseason game (with contacts rather than goggles)—after Rico Dowdle fractured his hip. HBO did a great job following all the fringe players hoping to make the team, and Hardy accidently summed up his status perfectly by realizing aloud that he didn’t know anyone from Jacksonville to even greet following the game.