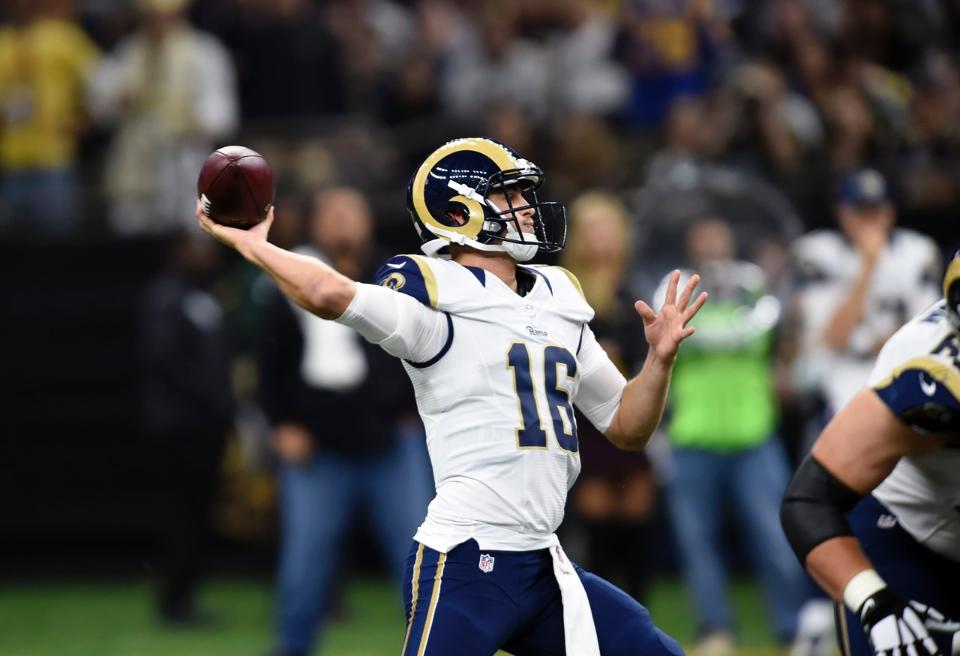 Sometimes quarterbacks just need to get into the right situation to live up to their potential, and Sam Bradford seems to finally have that with the Vikings. Had he been given more than one season with Chip Kelly, it could have happened in Philadelphia, but it didn’t. Vikings offensive coordinator Pat Shurmer was Bradford’s OC with the Eagles, and will implement a shotgun-heavy, spread attack that includes elements from Kelly’s fast-paced scheme. The tools are clearly there for Bradford, who throws the ball with great velocity, touch, and accuracy.

If we judged guys off their rookie seasons, Troy Aikman, John Elway, and Terry Bradshaw wouldn’t be in the Hall of Fame. Aikman went 0-11 on an awful Cowboys team, Elway completed just 47.5% of his passes with the Broncos, and Terry Bradshaw threw six touchdowns compared to a whopping 24 interceptions for Pittsburgh. Goff has all the talent in the world, and taking him off the hands of an ignorant fantasy owner should pay dividends, especially with Sean McVay now in LA.

Don’t look now, but the Browns are building something over in Cleveland. The team drafted DeShone Kizer in the second round of the draft, but here are the quarterbacks selected there since 2006 (none were selected from 2002-2005):

At least half of those guys didn’t pan out, and that is probably being generous. I think Kessler will beat Kizer (and Osweiler) out this summer and will prove himself as the long-term solution for the Browns with a healthy regular season.

A 35-year old as a buy in dynasty leagues? Look at what the Chargers surrounded Rivers with this offseason and you’ll see why. Not only did they draft Mike Williams with the seventh overall pick, but they also added two potential starters on the offensive line on Day 2 of the draft. Rivers is probably clinging onto a roster as a second quarterback in most dynasty leagues, so savvy owners could be getting him for a bargain, as he could have a few more elite seasons left in the tank.

Winston has thrown for over 4,000 yards in each of his first two seasons (and a combined 50 passing touchdowns), but the weapons added to the offense heading into the 2017 season should allow him to put up bigger numbers with more efficiency. It would be a disappointment if Jameis didn’t cut down his interceptions (18) from last year now that he has Mike Evans, DeSean Jackson, Chris Godwin, O.J. Howard, and Cameron Brate to throw to.

I don’t think Brees will slow down at all from a talent/abilities standpoint, but it’s hard to see his production from last season (5,208 yards and 37 touchdowns) staying there or getting better after losing a top-flight receiver like Brandin Cooks. The Saints will probably try to be a little more balanced offensively with the three talented backs they have on the roster, and Adrian Peterson’s nose for the end zone could cut into Brees’ upside.

Doesn’t it seem like every time a front office controversy emerges, the team struggles when the season starts? Just last year, it happened with the Ryan Fitzpatrick saga in New York. Well, the Redskins has two, as Cousins contract situation continues to linger on, and GM Scot McCloughan and the team had a messy divorce. Cousins could have a really big year before re-signing or heading to San Francisco, but there’s also chance that things fall apart.

Big Ben likes to be dramatic, but his retirement talk this offseason should give fantasy owners pause. Roethlisberger has fought injuries throughout his career and already has two Super Bowl rings, so he could really be looking forward to his life after football. I would bet on Roethlisberger playing a couple more seasons (at least; I mean, he has Antonio Brown), but you never know.

Tyrod has been really good for the Bills over the past two years—and the new coaching staff supports him—but the team can still move on from him after this season if they want to. The 2018 NFL Draft class is stacked at the quarterback position, and even if Tyrod performs well again and keeps him job next year, Sammy Watkins could be gone if he reaches free agency, which would leave Buffalo very thin at receiver.

Things seem to be looking up for Wentz after the Eagles signed Alshon Jeffery and Torrey Smith this offseason, but Alshon has been held under 55 catches and 825 yards in three of his five NFL seasons, and Smith is long removed from his 2013 season of 65/1,128/4. I think the perception of Wentz’s play as a rookie exceeded the reality of it, as he struggled with mechanics, accuracy, and decision-making as the season went on. Also, looking ahead, it seems like Doug Pederson could be labeled the scapegoat if the Eagles don’t take a step up in 2017, and it’s never good when a quarterback sees change early in his career. I would rather have Jared Goff than Wentz in dynasty leagues.