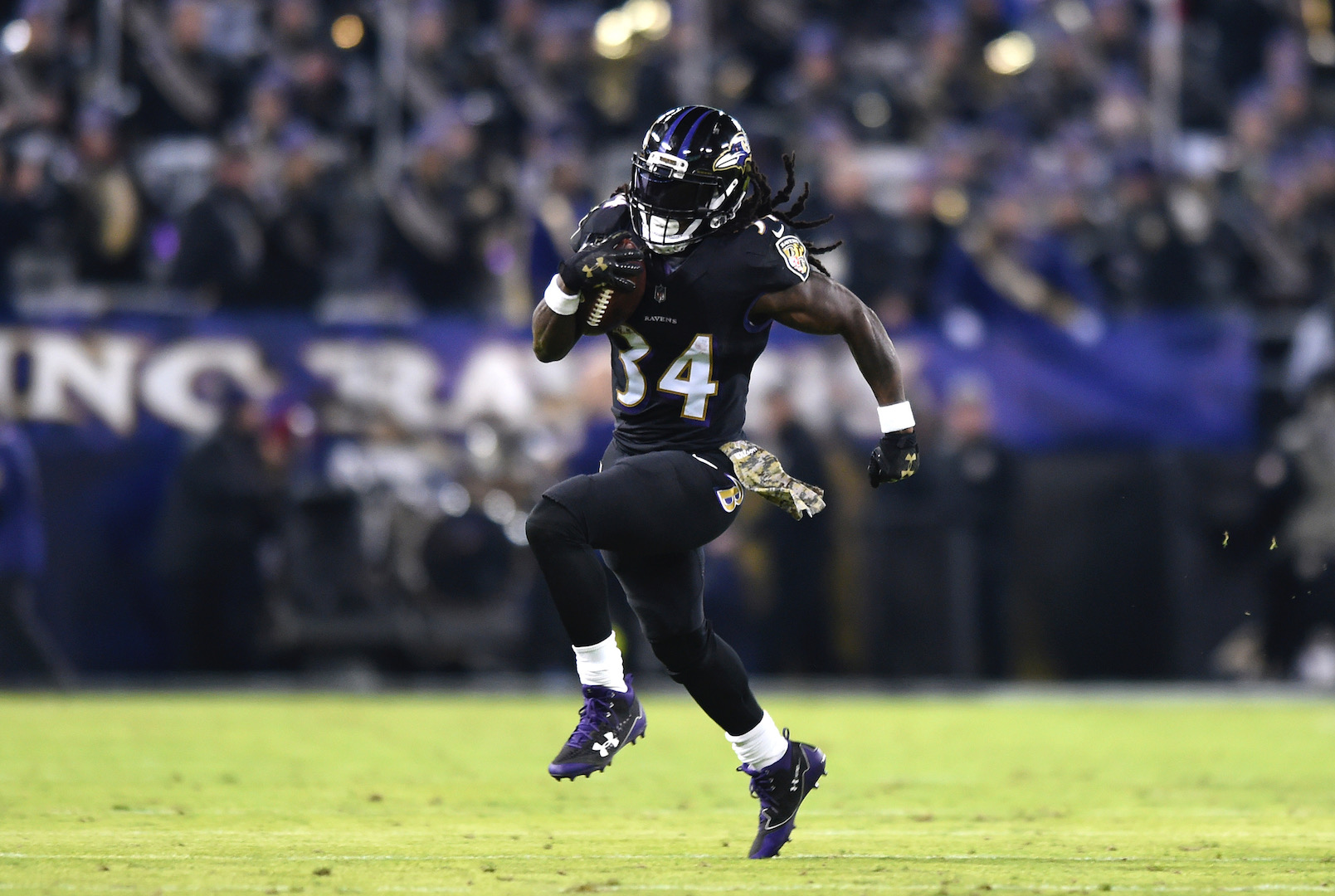 
What should fantasy owners make of the retooled Baltimore offense in 2018?

Joe Flacco is coming off a disappointing season in which he threw for 3,141 yards, 18 touchdowns, and 13 interceptions in 16 games, but much of the blame can be placed on a lack of consistency from the skill-position players. Now, the Ravens will have an upgraded supporting cast with three new starting receivers and a pair of rookie tight ends, but Flacco is going to have a first-round pick and probable quarterback of the future looking over his shoulder.

However, similar to Alex Smith last year, I think that could lead to the 33-year-old putting up the best numbers of his career. Flacco is a very competitive guy who carried the franchise to a Lombardi Trophy this decade, so playing with anger could lead to “Playoff Joe” showing himself for an entire 16-game season. Flacco is just a borderline option in two-quarterback formats to start the year, but all leagues should keep tabs on his early-season play.

Lamar Jackson was a top ten overall prospect for me in the 2018 NFL Draft, but people should keep in mind that the Ravens traded down twice and drafted a 25-year-old (next month) tight end before eventually trading back up for the Louisville product. In other words, I’m not sure Baltimore will be so eager to get a former Super Bowl MVP off the field in favor of a rookie that could use some polishing, especially with John Harbaugh firmly on the hot seat. If he does end up starting somehow, Jackson carries obvious QB1 upside due to his ability as a runner and would need to be picked up in all fantasy leagues.

Rounding out the depth chart, Robert Griffin III signed a one-year deal this offseason to try to resurrect his career in Baltimore. I’m not sure why teams didn’t take a chance on RGIII in 2017, but hopefully he can show enough in preseason action to get his career back on track at just 28-years-old. Barring a surprise trade or injuries, the former Rookie of the Year is an extreme longshot to see the field in the regular season and can be ignored for fantasy purposes.

Alex Collins was cut by Seattle last summer but broke onto the scene with the Ravens, rushing 212 times for 973 yards (4.6 YPC) and six touchdowns in 15 games (12 starts). He also caught 23 passes for 187 yards on his way to taking clear control of the backfield, which remains the case heading into the 2018 season. Collins doesn’t turn 24 until the end of August, so he’s just a few months older than Patriots first-round pick Sony Michel. I think the Irish-dancing running back is being valued appropriately in fantasy drafts as a low-end RB2/FLEX option.

A breakout for Collins might not have happened last year if not for a season-ending injury suffered by Kenneth Dixon in July, but the former fourth-round pick is returning and has a good chance to carve out a role after Baltimore declined to add anyone to the backfield this offseason. The 24-year-old is a thick, physical runner with some burst and solid hands, and I think his stock will continue to rise if he has a strong camp. That said, this is Collins’ backfield, leaving Dixon as a change-of-pace for the Ravens and a late-round handcuff for fantasy owners.

Javorius Allen could also continue to be involved coming off a 199-touch season in which he totaled 841 yards and six scores, but it’s important to note that the USC product was limited to 12 touches in 2016 (Dixon’s rookie season). I like Allen, but he doesn’t appear to be worth considering in standard-sized leagues.

Michael Crabtree signed with Baltimore to be their new No. 1 receiver, which continues a trend of veterans wideouts (Anquan Boldin, Steve Smith) joining the Ravens. In three seasons with Oakland, Crabtree had 25 touchdowns, including at least eight scores every year, and I don’t think it will take long for he and Joe Flacco to build chemistry, particularly near scoring territory. It feels like Crabtree has been around forever, but he doesn’t turn 31 until after the season opener. He is currently going in the seventh round of fantasy drafts and could easily live up to that value.

If he can stay healthy, John Brown will likely step right in and takeover Mike Wallace’s role as a deep threat that can also do damage on drags, crosses, and other shorter routes for offensive coordinator Marty Mornhinweg’s attack. Since breaking out with a 1,000-yard season in his second year in the league, Brown has been battling injuries and illness, which has limited him to a combined 60 receptions for 816 and five scores over the past two seasons. “Smokey” isn’t being talked about at all, but I think he’s worth a late-round flier in standard-sized leagues based on his upside, as big-armed Joe Flacco is the perfect quarterback for his skillset.

Willie Snead came into the league as an undrafted free agent and broke out with lines of 69/984/3 and 72/895/4 for Sean Payton’s offense in 2015 and 2016, but he fell out of favor last year and caught just eight passes for 92 yards. The 25-year-old might have a difficult time replicating the numbers he put up to start his career in an offense that already has a reliable possession receiver with Crabtree and several pass-catching options at running back and tight end. Snead is being valued significantly higher than John Brown right now, but I would take Brown every time.

Baltimore still has 2015 first-round pick Breshad Perriman on the roster, but they aren’t counting on him to breakout after totaling just ten receptions for 77 yards and no scores in 11 games last year. I don’t think Perriman will be guaranteed a roster spot if he doesn’t show something this summer, as the Ravens drafted two receivers in April.

Fourth-round pick Jaleel Scott has the size at six-foot-five to turn into a downfield, jump-ball winner similar to Kenny Golladay with Detroit in 2017, but I like fifth-round pick Jordan Lasely more in both the short and long term. He needs to be focused at the next level, but the UCLA product is a smooth athlete and could make a Year 1 impact if the opportunity presents itself. He is a name to file away for all fantasy owners, but neither guy should be drafted in redraft leagues.

It is extremely rare for a tight end to come in and put up quality numbers as a rookie, but Hayden Hurst is unique in that he a) will be 25-years-old by Week 1 and b) is somewhat prepared for what it takes to be an NFL player after a brief minor league baseball career. I compared Hurst to Greg Olsen, as he should develop into a crafty route-runner and solid all-around player. That said, he’s not a ready-made, blue-chip prospect that will immediately make a huge statistical impact in my opinion. Fantasy owners should probably look elsewhere outside of deeper redraft leagues.

Baltimore doubled down on the tight end position earlier this year, as they spent a Day 2 pick on Mark Andrews out of Oklahoma. He was extremely productive out of the slot for the Sooners with prototypical size (six-foot-five, 256 pounds) and surprising speed (4.67 40-yard dash) down the seam, but Andrews could face a tough transition after not blocking much in college. I want to see him learn how to be an in-line option in the mold of Jason Witten, but it probably won’t happen in 2018.

The 2018 NFL Draft wasn’t the first time the Ravens took two tight ends, as in 2015, they drafted Maxx Williams in the second round and Nick Boyle in the fifth round. Unfortunately, neither has developed how the team would have liked, and even if they both make the team and have a role, it won’t carry enough upside to warrant fantasy consideration.