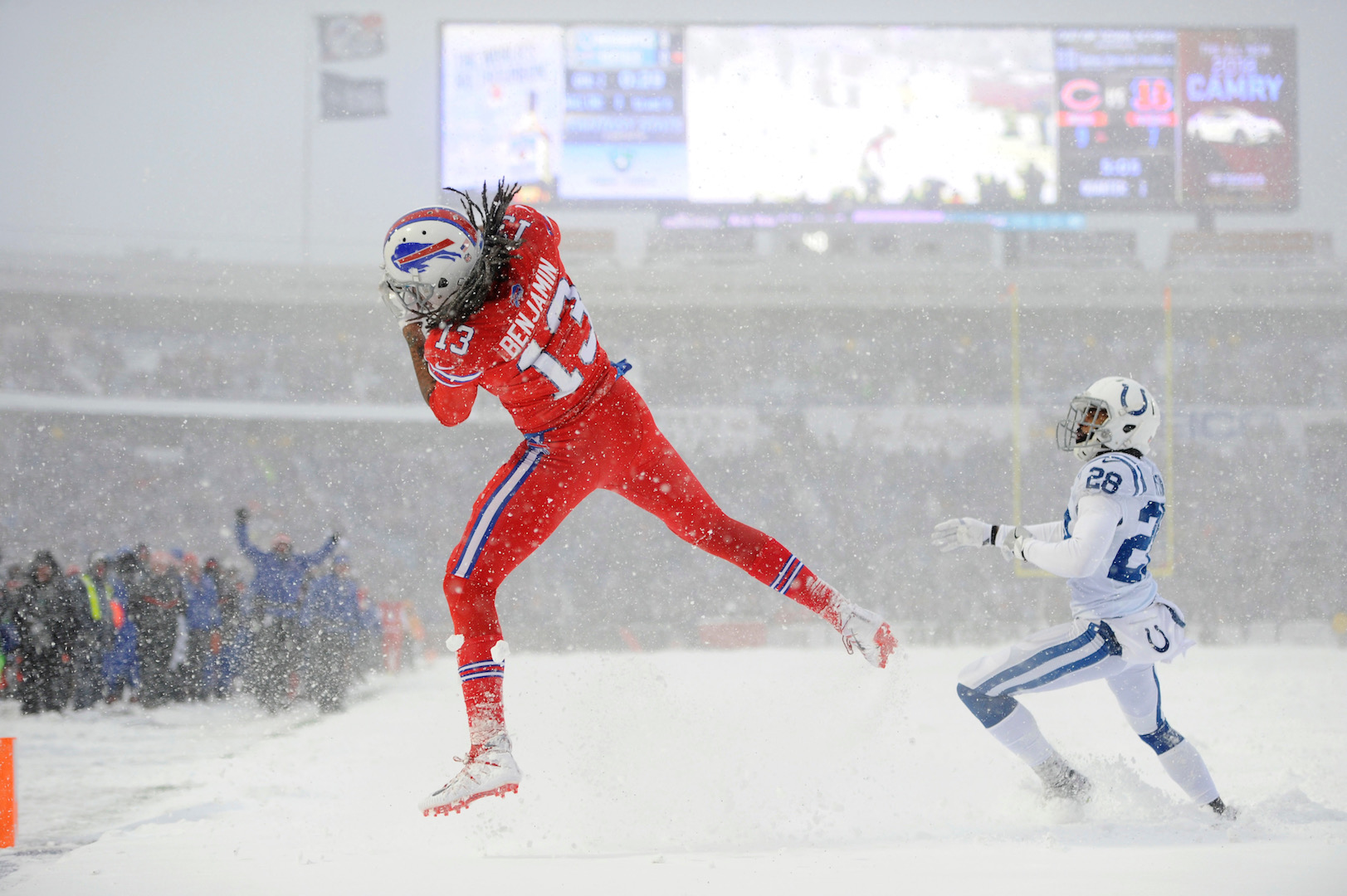 
How will a new starting quarterback impact Buffalo’s skill-position players from a fantasy perspective?

The No. 7 pick in the 2018 NFL Draft, Josh Allen should make starts sooner rather than later for Sean McDermott’s squad. It seems like most fantasy “experts” pay attention to stats and nothing else, so because Allen was a career 56.2% passer at Wyoming, it’s difficult to find anyone say anything nice about him. There’s basically no point in trying to convince people anymore, as doubters are set in their beliefs, but Allen has all the tools and intangibles to be an elite, high-upside QB1 throughout his career.

A lack of weapons for Buffalo will somewhat cap the potential in 2018, but I still wouldn’t discount a fantasy impact. Everyone knows about Allen’s legendary arm strength, but not everyone realizes that he is basically a blend between Carson Wentz and Cam Newton as a runner in the open field, so the rookie could have streaming value based on rushing production alone. That said, he is probably better left undrafted with a tough stretch to start the season @ BAL, v LAC, @ MIN. If he starts and shines in those games, Allen would need to be picked up in all leagues.

With a strong camp and preseason, it’s possible the rookie could give Buffalo no choice but to start him in Week 1, but the more likely scenario is probably A.J. McCarron starting and seeing what he could do against the difficult early-season slate. I like McCarron and think he could win some games for the Bills; as a fantasy option, though, the two-time national champion doesn’t carry a high floor or ceiling with Kelvin Benjamin and not much else to throw to.

Nathan Peterman has apparently looked really good this offseason leading up to what will apparently be a three-way competition, but like McCarron, he is highly unlikely to work his way into fantasy consideration if named the starter. I think Peterman or McCarron opening the year as the starter could just be as a “sacrificial lamb” against three of the league’s best defenses in September.

Despite coming off his fifth-straight Pro Bowl appearance, LeSean McCoy has all the makings of an early-round fantasy bust in 2018. He might be able to get by on just volume with no other options to get excited about in the backfield, but McCoy is coming off a career-low 4.0 yards per carry, lost three above-average starters on the offensive line, just had well over 300 touches (346) for the first time in Buffalo, and turns 30-years-old next week. New offensive coordinator Brian Daboll will want to pound the ball, but McCoy is going to consistently face stacked boxes no matter who is under center.

Backing up McCoy will be veteran Chris Ivory, who is the only other established early-down option currently on the roster. Since the only 1,000-yard season of his career (with the Jets in 2015), Ivory has rushed for a combined 821 yards and four touchdowns on 229 attempts (3.6 YPC) in Jacksonville over the past two years. He would probably be nothing more than a touchdown-dependent FLEX if forced into the lead role.

Travaris Cadet, Taiwan Jones, and Marcus Murphy are all going to fight for the No. 3 job, but none of them would be worth picking up outside of deeper PPR leagues. I think the Bills might be a team that picks up a veteran or perhaps trades for someone this summer.

Kelvin Benjamin saw his numbers predictably tumble following a trade from the Panthers to the Bills last October, but more concerning is his overall production falling for the third consecutive season. The big-bodied receiver could and should become a favorite of Josh Allen, A.J. McCarron, or Nathan Peterman, but I think he’s being drafted aptly as the WR44 in Round 12 because despite a great touchdown ceiling, he lacks the overall upside of other options.

2017 second-round pick Zay Jones followed up a disappointing rookie year with a forgettable offseason that included a scary incident at an apartment building and minor knee surgery, but he is expected to be a starter by default for Buffalo. A lanky slot receiver that struggled to create much separation, Jones needs to make significant strides to live up to his draft status. I wouldn’t bet on him being a fantasy contributor in 2018.

It’s possible that veterans Andre Holmes and Jeremy Kerley are able to knock Zay Jones down to fourth on the depth chart, as both guys have shown flashes of strong play throughout their respective careers. But even if that were the case, I doubt either would became a factor for fantasy owners. I think it might just be best to avoid Buffalo’s wide receivers altogether.

Charles Clay could wind up being the team’s No. 2 option in the passing attack once again, but he is just a low-upside, volume-based option for desperate owners or deeper leagues. The veteran has gone for consistent lines of 51/528/3, 57/552/4, and 49/558/2 in three seasons with the Bills, so you basically need to hit on a touchdown or a game with chunk yardage. Nick O’Leary and Logan Thomas would be worth looking at if Clay goes down, but they would both be similar low-upside plays.