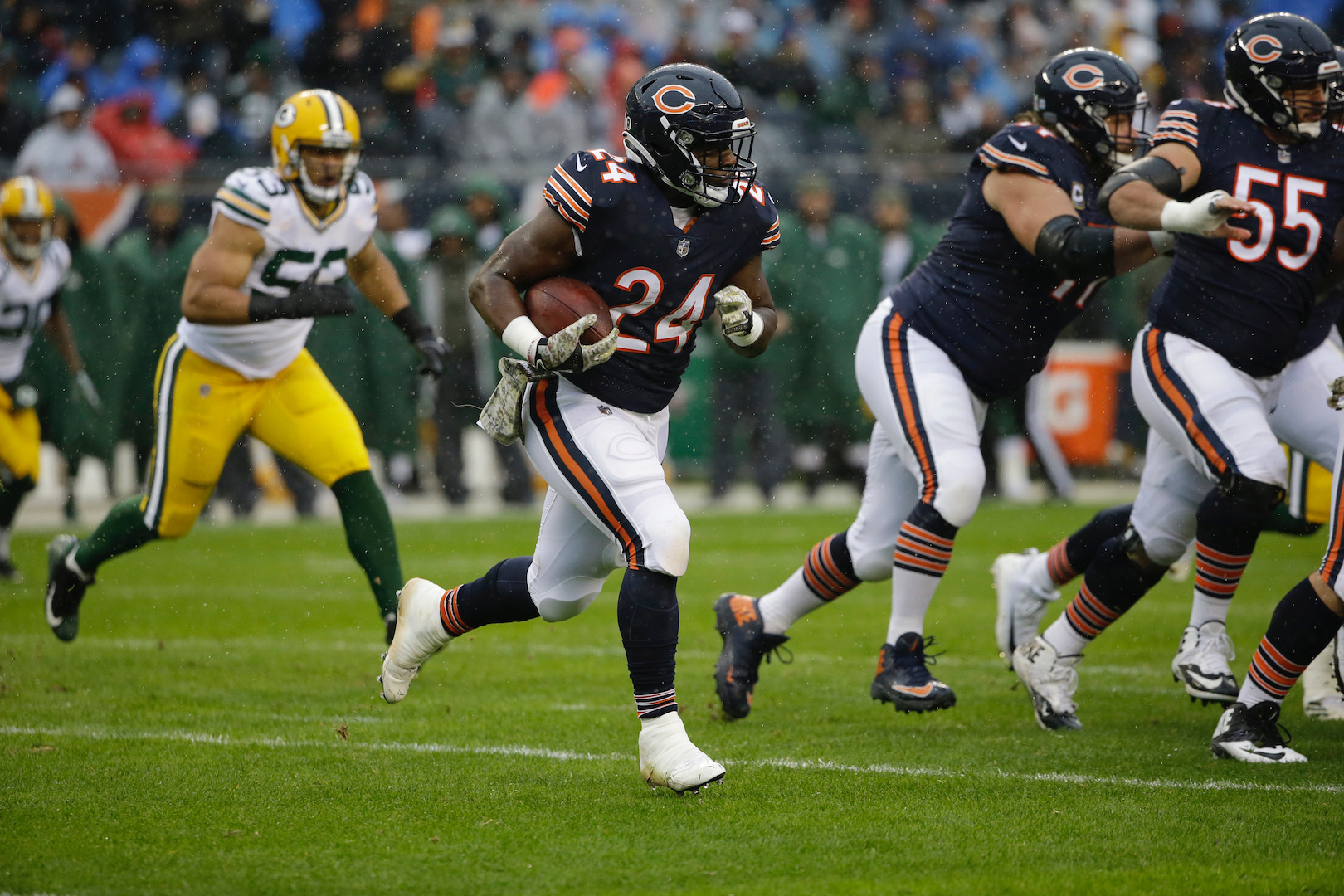 
Can we expect a huge leap from the Bears—new and old—under head coach Matt Nagy?

Now, the 24-year-old (next month) will have a new staff led by offensive-minded head coach Matt Nagy, which should be a huge boost to his career and season outlook. Plus, the receiving corps was completely remade with Allen Robinson, Anthony Miller, and Taylor Gabriel, not to mention Trey Burton at tight end. It wouldn’t be at all surprising if Trubisky makes a jump similar to Jared Goff with the Rams last year (3,804 yards, 28:7 touchdown-interception ratio), and I think it’s crazy that the “Pretty Boy Assassin” is being drafted comfortably behind Tyrod Taylor, Case Keenum, and Jameis Winston in fantasy leagues. Trubisky is a top-20 option with legitimate QB1 potential for me.

Despite not starting his first game until October of his rookie season, Jordan Howard ranks second in rushing yards since entering the league in 2016 with 2,435 yards on 528 attempts (4.6 YPC), and there’s no reason to believe he will suddenly fall off under a new coaching staff and playing on an improved roster. This season, Chicago’s offensive centerpiece should get more scoring opportunities in a more explosive attack and with what I believe will be an elite defense complimenting it.

Still, the biggest knock on Howard as an early-round selection in fantasy drafts is that Nagy wants his running backs to be a receiving threat, but Howard showed that he could as a rookie when he averaged 10.3 yards per reception on 29 catches. And the Bears—a franchise with a long history of dominant runners in the mold of Howard—aren’t going to significantly scale back his playing time, if at all. Everyone can sleep on him if they want, but I think Howard is a low-end RB1 with 1,500-yard, 12-touchdown potential, and something is wrong if he falls to the fourth round of fantasy drafts, which appears to be a possibility.

Tarik Cohen says he is learning “every position” in Matt Nagy’s offense, which he compared to “backyard football” because players can line up all over the place. That can in no way be seen as a negative for Cohen, who already did it all for Chicago as a rookie when he rushed 87 times for 370 yards, caught 53 passes for 353 yards, threw a 21-yard touchdown pass, and combined for 55 returns (including a highlight punt return TD). The Bears have a ton of weapons that need touches, but Cohen will be involved in a variety of ways, making him worthy of a mid-round selection in fantasy drafts.

Veteran Benny Cunningham (20 receptions last season) took some action away from Cohen during his rookie campaign, but Matt Nagy probably is going to use him more as an insurance policy for the “Human Joystick” than anything else, as I don’t see him being eager to take the dynamic duo of Howard and Cohen off the field if he’s not forced to. Cunningham is worth keeping tabs on in the case of an injury, but he provides no standalone fantasy value.

Allen Robinson is coming off a torn ACL suffered that he suffered last year in Week 1, but I think he was set for a huge year in Jacksonville before the injury. Remember, the Penn State product is just two seasons removed from an 80/1,400/14 line at 22-years-old and is now playing for the best offensive coach of his career. It will help that Mitchell Trubisky throws a beautiful deep ball, as Robinson is one of the league’s premier downfield threats and jump-ball winners. I think he’s clearly undervalued as the overall WR16.

One of my favorite players in the 2018 NFL Draft, Anthony Miller compares to Antonio Brown as an undersized target that just finds a way to win at all three levels with crisp routes, great explosiveness, and natural receiving skills. The rookie will likely contribute immediately from the slot in Chicago, and he could see some favorable coverage with the big names being the focus of defensive coordinators. I think Miller could reach 800-900 yards and 6-8 scores as a rookie, which would give him FLEX appeal in redraft leagues.

Taylor Gabriel was also brought in this offseason, and he will act as the field-stretcher in Matt Nagy’s offense. “Turbo” (by the way, Chicago clearly has the best nicknames in the NFL) probably won’t see a significant uptick in fantasy value from his time in Atlanta, but I think he will consistently be one of the best single-week upside plays due to a lot of one-on-one coverage in a talented offense with a quarterback that can connect on downfield throws.

It sounds like the Bears want to give former No. 7 overall pick Kevin White a chance to have a role in 2018, and it’s possible he is able to beat out Gabriel to start alongside Robinson and Miller. At this point, though, simply staying on the field would be a big step for White, so anything other than that would be a bonus. If he does earn a role, it wouldn’t be the craziest thing in the world for the 26-year-old to become a fantasy contributor, but he’s better left on the waiver wire until we see something. I think dynasty owners should keep an eye on undrafted rookie Javon Wims this summer, too.

Trey Burton will step right into the Travis Kelce role in Matt Nagy’s offense, which led career-best lines of 85/1,125/4 and 83/1,038/8 in over the past two years for the Chiefs tight end. We can probably expect Chicago’s free agent addition to line up out wide, in the slot, in the backfield, and as a traditional tight end this season, which will make things tough on defenses trying to match up with him. In his lone start with the Eagles last year, Burton caught two passes for 41 yards in a 51-23 blowout victory against Denver. I think he is valued appropriately in Round 10 or Round 11 of fantasy drafts as a low-end TE1, but people shouldn’t expect elite season-long upside from the 26-year-old.

Burton is locked-in as the starter for the Bears, but don’t be surprised if he loses some snaps in certain packages with other capable tight ends on the roster. Adam Shaheen was just a second-round pick in 2017, and he brings the size at six-foot-six, 270 pounds that Burton doesn’t have, which could lead to him being a factor in the red zone. Dion Sims is also a bigger target that could continue to be involved as an in-line blocker and receiver. Neither is going to be an option in standard-sized leagues with Burton healthy, but Shaheen in particular could have value if the starter goes down.