WOLF SPORTS ALERT There may be temporary bugs due to site performance upgrades. Thank you for your patience!
Home / frontfantasy / 2018 Fantasy Football Preview: Cincinnati Bengals 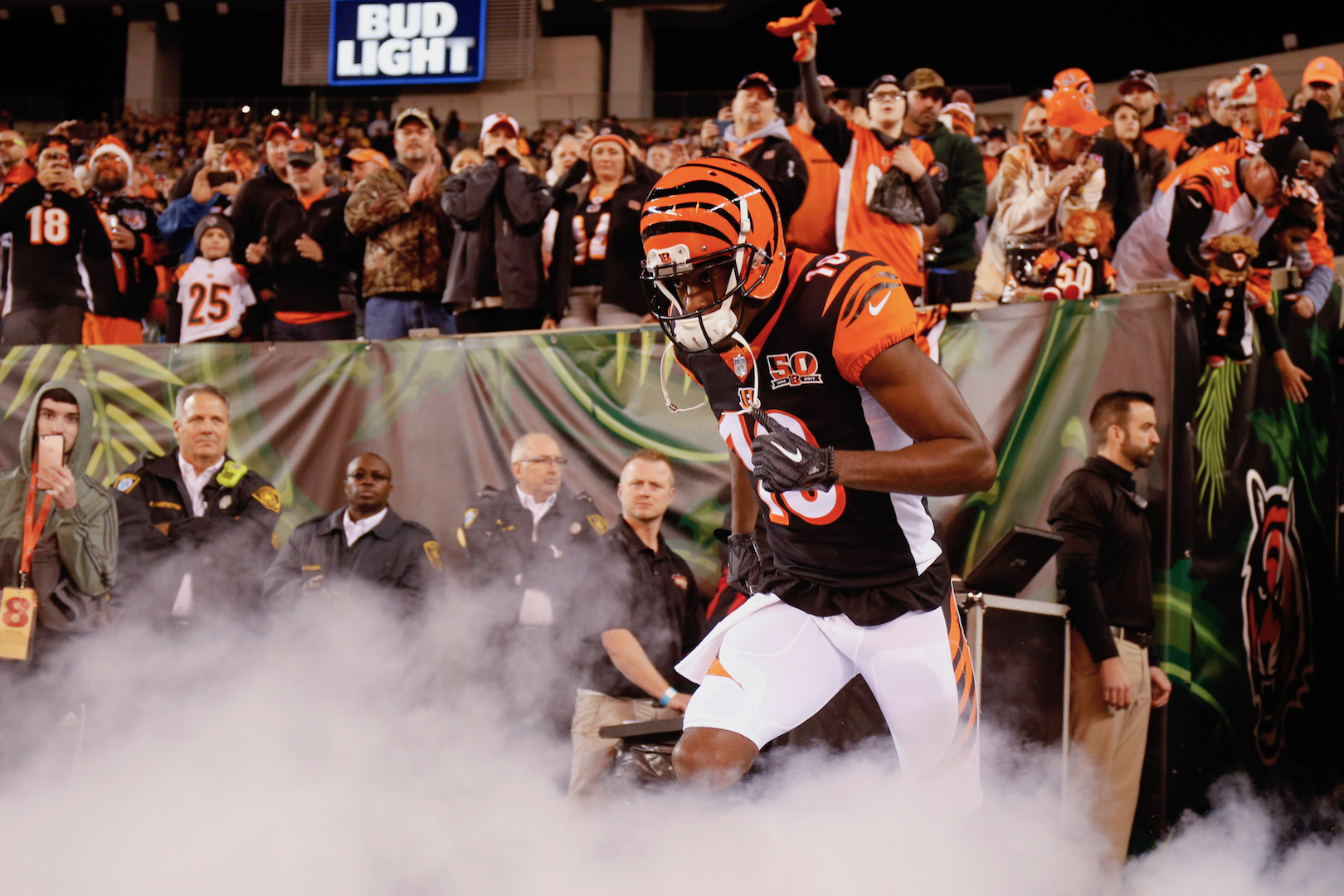 
What can fantasy owners expect out of Andy Dalton, A.J. Green, and the Bengals offense in 2018?

The Bengals had scored just 9 points in two games before Bill Lazor took over as offensive coordinator last season, and his impact was obvious for Andy Dalton and the passing attack. With Lazor at the helm for the final 14 games of the season, Dalton threw for 25 touchdowns and just eight interceptions (compared to zero touchdowns and four interceptions in Week 1 and Week 2), and Cincinnati went 7-7, including close losses against Green Bay—in Lazor’s first game as OC—and Pittsburgh.

The play-caller was retained, had the interim tag removed, and signed a two-year extension January, so Dalton should have a really strong grasp on the system with an entire offseason to master it. Lazor previously coached under Chip Kelly in Philadelphia and uses an up-tempo scheme that can keep defenses at a disadvantage. I’m not sold on Dalton as someone that can carry a team to a championship, but he should put up numbers this season with good weapons in a quarterback-friendly system. He isn’t worth drafting, but the 30-year-old will be a solid streaming option in the right matchup, and for what it’s worth, the Bengals face the Colts and their league-worst cornerback group in the season opener.

Joe Mixon didn’t have the season many expected as a rookie when he rushed 178 times for just 626 yards (3.5 YPC) and four touchdowns, but blocking was an issue all year for the Bengals. Fortunately, new left tackle Cordy Glenn and rookie center Billy Price should really bolster the offensive line and open up plenty of holes in the running game. With a smooth, all-around skillset built to be an offensive centerpiece, Mixon is trending way up, especially after rushing 51 times for 256 yards (5.0 YPC) over his final four appearances in 2017. I would be surprised if his Round 4 ADP doesn’t rise.

There’s a chance the Bengals move on from Giovani Bernard to save over $4 million in each of the next two years with a minimal dead cap hit, but I think the team will probably keep him as a high-end backup with great versatility. Bernard rushed 105 times for 458 yards (4.4 YPC) and two touchdowns last year, also adding 43 receptions for 389 yards and another two scores. Plus, the former second-round pick actually put up most of his numbers over the final five weeks of the season, rushing for 337 yards on 71 attempts (4.7 YPC) in extended playing time when Joe Mixon was inactive/limited. I don’t think he will have standalone fantasy value, but Bernard could be a low-end RB2 if Mixon goes down.

Mark Walton could be the long-term backup in Cincinnati after being selected early in the fourth round of April’s draft, but he is unlikely to see more than a handful of touches per week with Bernard on the team. The rookie can be ignored in redraft leagues this summer, and barring a serious injury to Mixon, I don’t see the upside when it comes to investing in Walton for dynasty leagues.

Excluding two years ago when he was on pace for his best season before injuring his hamstring, A.J. Green’s “worst” fantasy season was a 69/1,041/6 line in 2014. A low-profile star since being drafted fourth overall in the 2011 NFL Draft, the Georgia product is still at the top of his game entering his age-30 campaign. He should be the focal point of the passing attack once again, and for me, Green is an elite, high-floor WR1 that looks to have a cupcake schedule this year.

John Ross will need to earn a role in training camp, but I think he is a definite buy-low candidate in dynasty leagues and a high-upside pick late in redraft leagues. Unlike some other speed receivers who have failed to make an impact at the next level, Ross has natural ball skills to go along with his Combine-record 4.22 wheels. If he stays healthy, the 23-year-old could be a difference-maker alongside A.J. Green.

Brandon LaFell has started 29-of-32 games for Cincinnati over the past two seasons, and he’s been a reliable target with at least one reception in every game as a Bengal. The veteran is unlikely to reach his 64/862/6 line from 2016 if Ross becomes a factor, but LaFell could be an underrated FLEX option in the right matchup; and again, the schedule looks very favorable for Cincy’s passing offense. Still, he probably isn’t worth drafting in 10- or 12-team leagues.

2016 second-round pick Tyler Boyd, 2016 sixth-round pick Cody Core, and 2017 fourth-round pick Josh Malone could all push for a role, particularly if Ross doesn’t step up or LaFell falls off. I think Boyd is the only one with a realistic shot at significant fantasy value this season, but he isn’t worth targeting in redraft leagues.

Tyler Eifert is likely going to be pushed up draft boards due to his touchdown potential, but I have a difficult time putting stock in a guy that has missed more games (41) than he’s appeared in (39) since entering the league as a first-round pick in 2013. Outside of his breakout season three years ago where he caught 52 passes for 615 yards and 13 touchdowns, Eifert has totaled just seven scores in four years, and more back issues are already putting the start of training camp—and possibly the regular season if history is any indication—in doubt. Unfortunately, Eifert has the makings of a wasted pick in fantasy drafts.

When he became the starter last season, Tyler Kroft made the most of his opportunity with seven touchdowns on his way to becoming a favorite of Andy Dalton in the red zone. I think the 25-year-old, who caught 42 passes for 404 yards in 2017, is worth monitoring this summer depending on Eifert’s health. Tight end is deep, but Kroft could be a bye-week fill-in and streaming option in Bill Lazor’s offense.